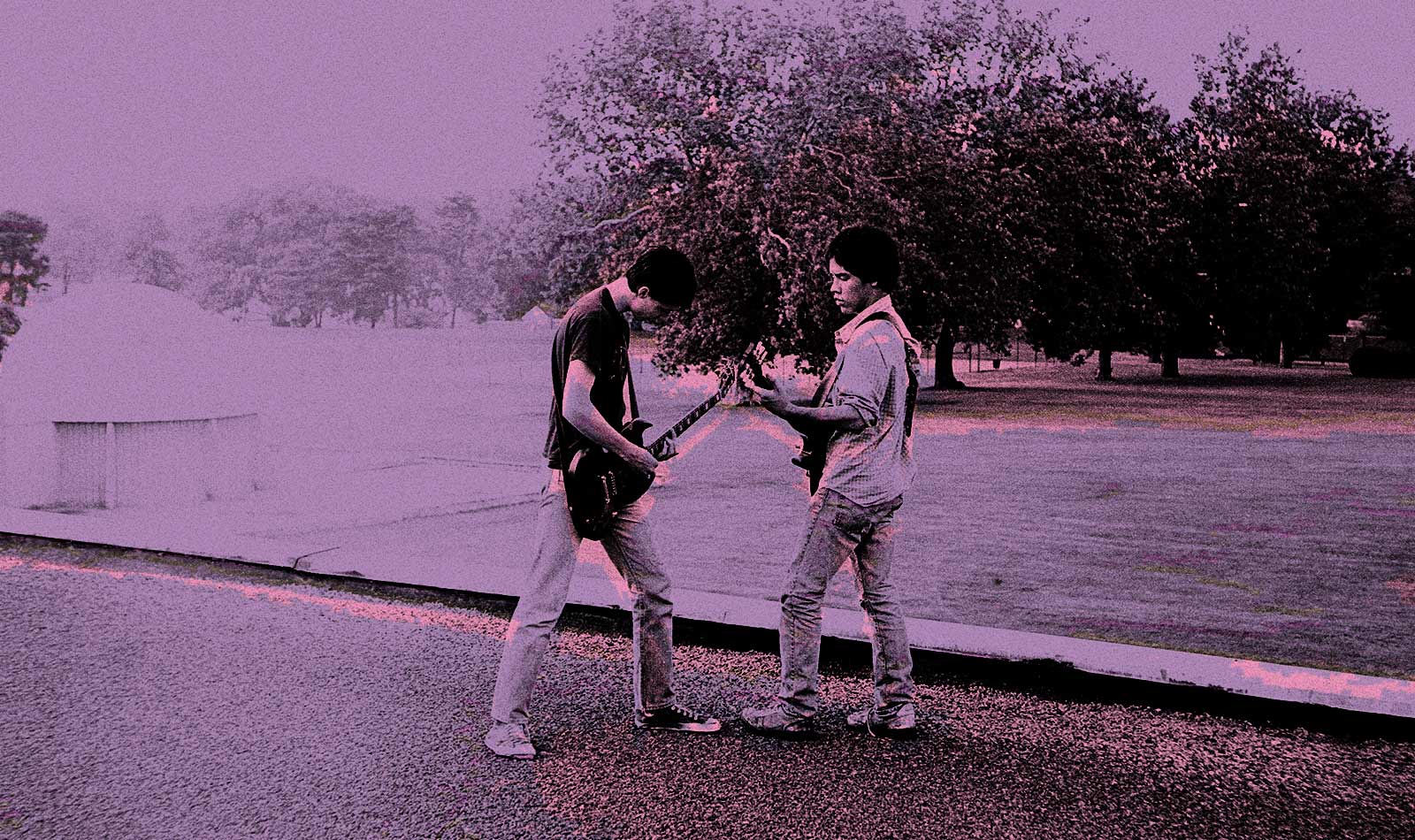 The early ’80s hardcore scene was populated by outlier bands who released one-off albums, a lone single, or even just a demo whose influence would explode far beyond their modest recorded output.

In many ways this sums up Annapolis, Maryland punk act The Hated, whose hard-to-find vinyl releases (and even more obscure cassette tapes) would see them placed alongside the likes of Rites Of Spring, Embrace, and Moss Icon as grudging forefathers of the sprawling, ever-morphing subgenre known as emo. This has never been the be-all or end-all of the band, however, and with The Best Piece Of Shit Vol. 3, the first in a long-awaited series of archival releases from Numero Group, the band’s earliest, wildest forays have been uncovered in a manner that sheds light while further deepening the mystery that surrounds them.

The band’s story centers on the nucleus of guitarists/vocalists Erik Fisher and Daniel Littleton, childhood friends whose fathers taught at the same small liberal arts college (notably, Littleton would go on to be in beloved indie rock outfit Ida). “We communed at the altar of the Beatles,” laughs Fisher. “That was one pre-Hated connection that Dan and I had. Our families used to drop us off at the public library where there’d be a screening of Magical Mystery Tour [1967] or Let It Be [1970], and we’d just sit there enraptured. It’s significant because the first time we ever thought of having a band, I called Daniel up and I said, ‘We need to start a band called The Dead Beatles where we cover The Beatles but sound like the Sex Pistols.’ We learned five Beatles tunes and played them fast and distorted, but kept the harmonies. That was a two-month project, but that’s how we got going.”

Thrash pacing mixed with twining vocal harmonies provides an appropriate early reference, though they would ultimately absorb everything from the ambitions (and drummer) of hometown heroes Spastic Rats to the politics of MDC and Minutemen and on to the mind-melting singularity of Sun Ra. Littleton’s music minister father, too, provided a pivotal influence in terms of no-holds-barred listening, thanks to his fondness for Duke Ellington, Thelonious Monk, and experimental organ drones. “We grew up with his feeling for harmony and I think it made a big impact on all of us,” says Littleton. “Just hearing music woven into the fabric of life; there was never any ‘Oh, music is this abstract principle or discipline.’ It was like, ‘No, it’s not, it’s fucking air. It’s the food. It’s how we live.’”

This sense of music as a vital part of life served as a guiding principle for Fisher and Littleton. The pair endlessly traded tapes, swapping everything from song fragments and sonic experiments to thoughts, dreams, and philosophies. “We were really inspired by each other,” says Littleton. “I’d get a call at two in the morning. It’d be like, ‘I got this thing. Can you get here?’ And I’d catch a cab and go over to Eric’s house and just be like, ‘All right, how does that go?’” Fisher, too, attests to this all-consuming intensity. “We filled pages and pages and cassette tapes,” he says. “We were up all hours sacrificing work and school and family relations and girlfriends, all on this mad journey.”

The Best Piece Of Shit Vol. 3 speaks to this frantic, youthful energy, and the breadth of ideas the band were trying to cram into their music. But despite being earnestly literate, political, and philosophical, the frantic instrumental hammering and interweaving vocal lines are often offset by unexpected blurts of goofball humor. “The humor was really important to us,” says Littleton. “There was a lot of pain and trauma and crazy shit going down in our lives, and we really relied on each other to get through it all. So that humor was as much about survival as the most overtly defiant stuff. It wasn’t just a little gag. We were 100% invested in it as a way of dealing with all the absurdity that we saw.”

Despite putting out just a handful of physical releases in their lifetime, the band produced a vast hoard of unreleased material. This, beyond the inevitable trials of getting the same people on the same page after three decades, explains why the Hated discography seemed for so long like a ridiculous, unfulfillable grail quest: scene shorthand for ”Well, that’s never gonna happen,” ever since Troubleman Unlimited’s attempts back in the early 2000s. “We got really far into the process with Mike Simonetti and Troubleman,” says Littleton. “He was the seed for it. He supported us, put up money and helped us find tape machines that nobody uses anymore. And then Kenny Hill, our drummer who passed away at the beginning of the pandemic, he and I would go door to door to places where we knew of somebody who might have a master tape. It was like an archaeological dig.”

The baton was taken up by Numero’s Ken Shipley, his Melvillian pursuit of the project involving the restoration of tapes dating back to ’83. But if finding and fixing the source material was one thing, sifting through it was yet another. “There’s an insane amount of studio material,” says Littleton. “There are acoustic versions and multiple versions of every song. There are songs that nobody’s ever heard. There are hours of demos, songs that we tried with The Hated that didn’t work, songs that we worked on with former members that we just dropped because we couldn’t face it…Around the beginning of the pandemic, I realized I had something like 12 hours of transferred music, and that I was the only person on the planet who knew what it was, where it was, and how to find it. So I digitized all of it in real-time and annotated everything.”

In many ways, the monumental task helped reignite the spark between Fisher and Littleton, the duo viewing the selection and sequencing of this first compilation as a new and very deliberate creative endeavor. “What you’ve got on this record is our latest project,” says Fisher. “We went back and forth, we really curated those third and fourth sides.”

It’s an effective time capsule, one that provides an early primer for an entity whose inner workings become increasingly convoluted the more layers you peel back. But, as with many of Numero’s reissues, it also serves to illustrate the context of the wider universe the band inhabited. While The Hated operated a stone’s throw from Washington, D.C., witnessed first-hand the feted Revolution Summer, and shared infrastructure, equipment, and stages with the likes of Soulside and a nascent Fugazi, their primary takeaway was the power of what could be achieved locally. “The Dischord scene was very contextual,” says Littleton. “It was very much about ‘this is what is happening in D.C.,’ and what we were dealing with was very much like what was happening in our town. That’s what Kenny Hill tried to do in Annapolis with Spastic Rats and Vermin Scum, and what we tried to do. There were bands—good bands—and there were a lot of likeminded people trying to stick together. There was a lot of violence and if you put yourself out there you got blowback for it, so we really needed each other to get through those times.”

He continues, impassioned: “And the music really mattered at a really profound level to all of us. I feel like that’s what we’re really trying to present with this project, to say there might be better bands, more important bands, bands we all know about. There are tastemakers who’ll draw out the family trees and tell you what is good and important. That’s all good. What we can do is provide evidence of what some kids were doing in the fucking woods, in their neighborhoods, in their towns. And I hope people get a chance to hear Kenny Hill’s drumming, Mike Bonner’s drumming, Colin Meeder’s bass parts. I hope people get to hear how it all congealed. How these fucked up kids were digging around and weren’t just trying to sound like Minor Threat or Bad Brains—we wished we could be as good—but we had our own thing and went all the way into it. History is always a little more messy, a little more interesting if you dig. And so we just dug into the fucking Maryland dirt and have gift-wrapped this package for the world. So, you know, enjoy the stench and dig in.”