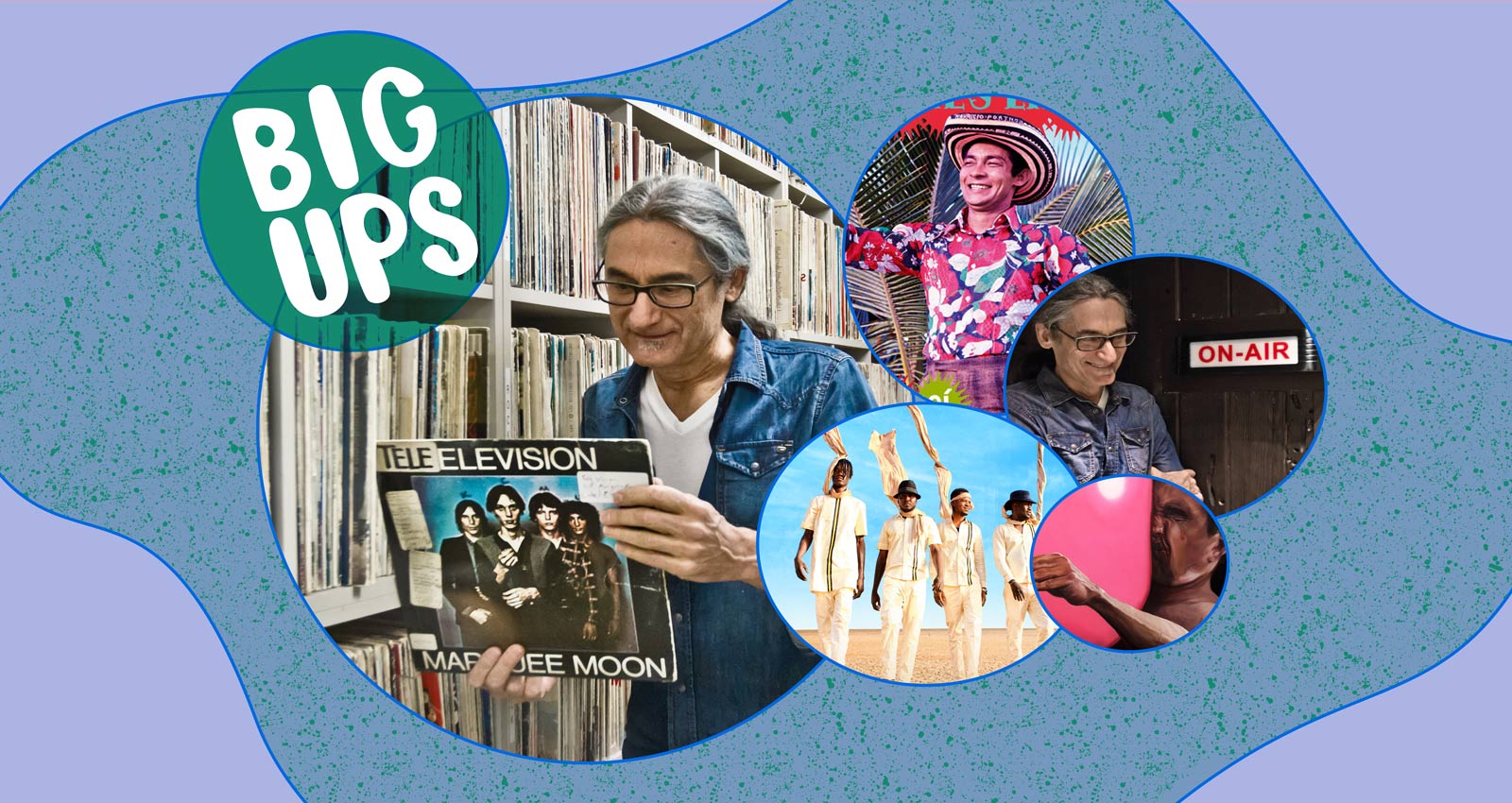 At this point, International Clash Day is something of an institution at beloved Seattle public radio station KEXP. For the last eight years, the station has dedicated 24 hours to celebrating the life, music, and politics of the legendary punk band. So it’s surprising to learn that the tradition started more or less by accident. “The host of our morning show, John Richards, was playing a track from The Clash when a listener called in and requested more Clash,” says Kevin Cole, who hosts the KEXP evening show Drive Time, along with DJ Riz. “So, John played another Clash song. More listeners kept requesting The Clash, so John kept going. At one point he said, ‘It’s International Clash Day!’ and dedicated the rest of his show to The Clash.” Listeners loved it, and the decision to make International Clash Day an annual tradition fit the station’s ethos perfectly. “The genesis of the day was very much in the spirit of The Clash,” Cole says, “spontaneous, creative, joyful, rebellious. The community drove it with their enthusiasm, and KEXP, being unlike other playlist-constricted stations, responded.”

The celebration has gotten bigger each year, with radio stations and record stores in China, Argentina, Iceland, Mexico, Chile, South Africa, Croatia, Australia, Brazil, Finland, Canada, and Antarctica getting on board. For this year’s edition, the station decided to focus on one aspect of the original concept. “When he was describing The Clash, Joe Strummer said, ‘We’re anti-fascist, we’re anti-violence, we’re anti-racist and we’re pro-creative. We’re against ignorance.’ These are all qualities that KEXP shares, and like the band, we’re striving to build a diverse, inclusive community built around a shared love for music,” says Cole. So this year during Drive Time, which will air tonight beginning at 4pm PST, Cole is focusing his choices on bands that share The Clash’s message of anti-fascism and anti-racism, and who are also on Bandcamp. “Given the challenges, insanity, and hardship of the last year with the pandemic, racial injustice, police brutality, immigration issues, election madness, fear-mongering, fascism, hate and polarization, it seemed more important than ever to lean into the message of The Clash,” Cole says. “The values they stood behind, especially anti-racism and anti-fascism, are sadly as relevant today as they were 40 years ago.”

For his Big Ups, Cole has selected bands who share that same message, many of whom he’ll be playing on tonight’s show. “2020 was a hard year and many people have a feeling of ‘How could we see it coming?,'” Cole says. “But as far the social and racial unrest of our country, it was—unfortunately—very easy to see coming. That led us at KEXP to take a long, hard look at our own station and organization to see how we were contributing to the problem. We are committed to becoming an anti-racist organization. We made big programming changes in 2020 that don’t by any means ‘fix’ the problems, but will hopefully further our mission of music discovery and better BIPOC representation. International Clash Day is about more than just celebrating an awesome band; it’s about the band’s message and celebrating the power of music to make the world a better place.”

“SAULT was the most-played band on KEXP in 2020, and for great reason. The two—yes two!—albums the UK band put out last year are filled with rich and powerful tracks that call out racism and demand change. The lyrics from “Hard Life” say: ‘It’s a hard life, fighting to be seen/ It’s a hard life, we were born to lead/ Oh, be on your way/ Things are gonna change.’ When I think of bands singing about anti-racism today, I think of SAULT. It may be a mystery who they actually are, but they are at the top of my—and KEXP’s—list.”

“Rebel music. If that isn’t what this whole day is about, I don’t what is. As the song goes, ‘Are you ready to put the work in? It’s urgent/ …There’s a war in this country/ Walking with snakes among me/ Create rebel music to the sound of the drumbeats.’ Third Root is a hip-hop project out of San Antonio, Texas that consists of Charles Peters (Easy Lee), Marco Cervantes (Mexican StepGrandfather), and DJ Chicken George (DJCG). On this song, they pair up with Texas friends Black Pumas for a hard groove perfectly suited for rhymes demanding social change. Peters and Cervantes are teachers in San Antonio, but all three of them see their art, teaching, and activism as something bigger—acts of rebellion. Cervantes told Bandcamp in 2016, ‘Organizing, educating, building, and loving each other. We still have a long way to go, but there are artists, educators, doctors, and many more doing work that matters. I think we can all help to work towards social justice and equity, but a shift relies on help from all angles.’ Credit to my fellow KEXP DJ Darek Mazzone for turning me on to Third Root.”

“On this song, Black Irish rapper Denise Chaila raps about people mispronouncing her name—a kind of microaggression she is sadly all too familiar with. She has been outspoken about Ireland’s racism and oppression—both in her songs and her interviews. Her eloquence on racism has been met with backlash from the far right—but it hasn’t stopped her from making music that matters.”

“In my eyes, IDLES have such a close tie to The Clash, that when they performed at our International Clash Day broadcast in 2019 in London, I asked Joe Talbot how deep the influence ran. Joe told me it was pretty much non-existent—he hadn’t even been born when The Clash released London Calling! But both bands have a pro-creative, anti-fascist message. ‘Grounds,’ specifically, always fires me up. When talking about the oppressed and how to fight back, the song becomes an anthem: ‘Do you hear that thunder? That’s the sound of strength in numbers.'”

“This song is driving—and I mean that in two ways. First, it makes you want to drive fast in wide open spaces. Then, when you learn what it’s about, it makes you want to get to work to change America. ‘I came up with this song after someone asked me for my papers at a bar and started preaching about border security,’ frontman Sergio Mendoza reveals. ‘Redoble’ explores the disgusting link people reflexively make between immigration and criminality. It’s light beats and percussion are paired with lyrics that cast the dangers immigrants face in the U.S. in stark relief.”

“Last year’s International Clash Day focused on climate change, an issue Joe Strummer addressed in songs like ‘London Calling’ (which originally was going to be called ‘Ice Age’). So for this mix, I wanted to find a band or song that talked about climate change, to give a nod to last year’s International Clash Day. And when I realized that Bomba Estéreo recently released a new batch of remixes, I jumped on them! As Bomba Estéreo’s Simón Mejía said recently, ‘We know climate change is real, and not accepting that is like going against life itself.'”

“’Badala’ is Songhai for ‘I don’t give a shit.’ The song is written from the perspective of a woman freed from the domination and oppression of her man, and of the men who dominate the West African country. ‘I don’t give a shit’ is not an apathetic response—it’s a battle cry to those telling you you’re not good enough or not worthy enough for equality and freedom.”

“Did you know that Bandcamp has an anti-fascist tag that bands can use? They do, and that’s how I found this anti-fascist metal band. This song starts with a reenactment of Paul Robeson’s testimony at the ‘House of Un-American Activities Committee.’ The HUAC was created in 1938 to investigate alleged disloyalty and subversive activities on the part of private citizens, public employees, and those organizations suspected of having fascist or communist ties. The HUAC asked Paul, ‘Why did you not stay in Russia?,’ and he answered, ‘Because my father was a slave, and my people died to build this country, and I am going to stay here, and have a part of it just like you. And no Fascist-minded people will drive me from it.'”

“The compilation this track comes from contains, as they put it in the album notes, ‘THIRTY ONE TRACKS TO COMBAT RACISM.’ All proceeds support Black Lives Matter and Life After Hate, a nonprofit in the U.S. that seeks to combat racism by providing resources to help people leave racist movements, and to de-radicalize violent Far Right extremists. Drive Time DJ Assistant, Sofia K, tipped me off to this Nori track and the more I listen to it, the more it reminds me of The Clash.”

Bartees Strange
“Tear These Fascists Down”

“If you know one thing about Woody Guthrie, it’s the message written on his guitar: ‘This Machine Kills Fascists.’ He wrote this song almost 80 years ago, but here we are today, and it’s still hitting hard. Bandcamp is a magic place for all kinds of reasons, but the fact that I can find Bartees Strange covering ‘Tear These Fascists Down”’while also learning about a rad artist called Oceanator is taking the cake.”

“I have to thank fellow KEXP DJ Albina Cabrera for her deep dive on the connection between The Clash and Andrés Landero. It’s such a cool story, and you can read more about it here. I wanted to end this list with a song that Joe Strummer actually played on his radio show. Strummer was hungry for music from all over the world and championing the voices of those singing the messages he believed in. Colombian artist Andrés Landero came onto his radar when a friend—Jason Mayall—delivered a stack of records to Strummer after traveling. From Landero’s Bandcamp page: ‘Andrés Landero embodies like no other the spirit that made it possible to bring cumbia to the world. His legacy represents a creative pinnacle of tropical music and has influenced countless artists.’ When people make music that influences others, it doesn’t stop at that person. The fabric of each protest song, each anthem, each ballad, each fight song—any music that matters—is the product of decades worth of music discovery and influence. This is something that white people have historically done horribly—taken people of color’s style or heritage and appropriated it for their own benefit. I want to end this post by acknowledging and highlighting this Latinx musician who greatly inspired The Clash, and bands far beyond.”