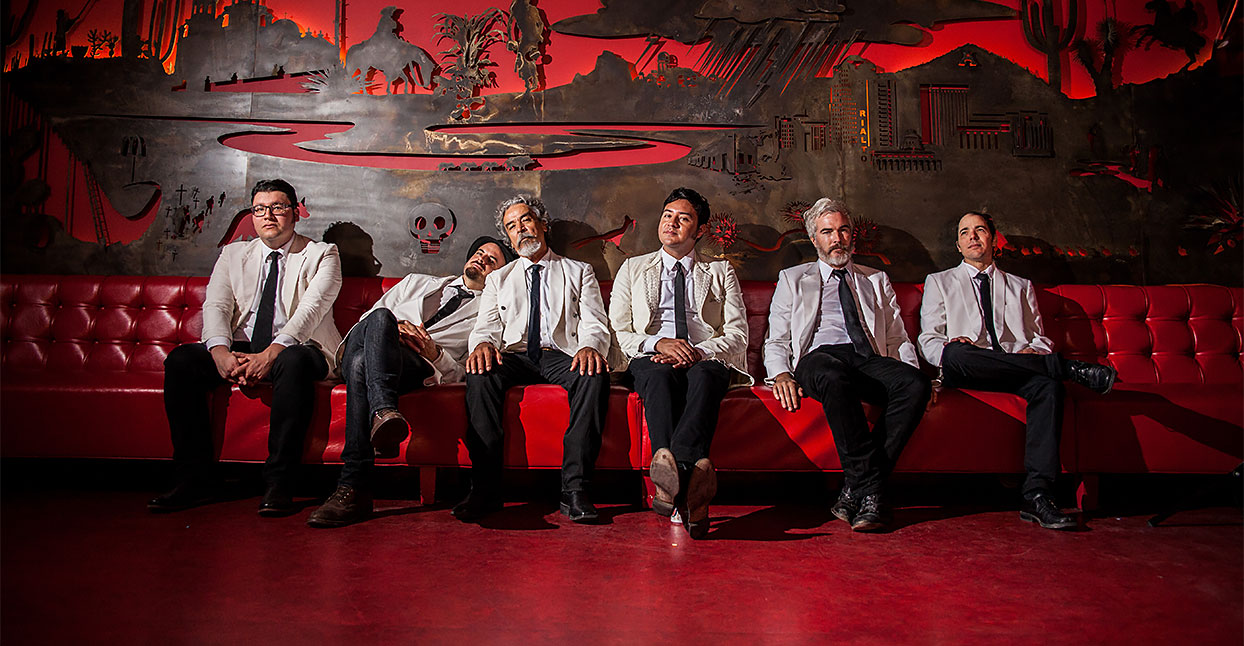 Orkesta Mendoza’s adventurous second record ¡Vamos A Guarachar! paints a vivid portrait of Latin American folklore. It takes listeners on a celebratory journey, one where mestizo-infused genres like boogaloo, cumbia, chicha, and mambo intersect. “It’s like a little road trip of Latin America,” Sergio Mendoza boasts. Mendoza is the founding member of the Tucson-based ensemble, who embrace their Latino roots while showcasing an impressive musical range. “It was really hard for everyone to tell where the album was going, because there are a lot of different styles,” explains the 35-year-old bandleader.

Mendoza grew up between the first and developing worlds. He was born in Nogales, Arizona and raised in Nogales, Sonora, Mexico—two hinterland towns separated by a 45-minute drive, and divided by the US-Mexico border. The borderlands are a particularly diasporic, transnational region known for their rich cultural hybrids, which emerge as a result of the Mexican and Latinx immigrants who settle there in the hopes of crossing over to el otro lado (as the locals call the United States). Music from North America, Mexico, Central and South America intertwine and influence one another there—a cultural and geographical phenomenon that impacted Mendoza’s artistic development.

As a child during the ’80s in Sonora, Mendoza was fascinated with the vigor and candor of regional Mexican music, as well as the festive, energetic punch of tropical music: “I loved Ramón Ayala, and Chico Che was my cumbia god!” he says. He also took a strong liking to British rock. “When I first learned how to turn on the record player at age four, I would put on the Beatles. The other record I loved was by Pérez Prado, a Cuban bandleader [of the ’40s and ’50s].”

When he was seven, Mendoza and his family moved to Nogales, Arizona. It was there that his sonic influences began shifting. “When I started making new American friends in school, they were into different musical styles, like The Police. That’s when I began to abandon all of my Mexican and Latinx stuff for a while,” he says. As a young boy who could only speak Spanish, but who longed to fit into a foreign, English-speaking land, the move made a kind of sense. “I went in that direction for about 10 years,” he recalls. Turning to the rebellious sounds of punk and rock, Mendoza had his first experience fronting a rock band as an eighth grader for a middle school talent show.

When he was 18, Mendoza moved to Tucson and reconnected with the music of his youth, like “el canto nuevo, la trova and Silvio Rodriguez.” But the album that cemented his love affair was Pablo Milanés’ La vida no vale nada. “That record made me fall in love with [Latin music] all over again. The production has these really weird chords and instrumentation; the singing and songwriting is just really good—it’s pretty psychedelic,” he says.

Mendoza put his passion to good use, and began forming what would eventually become Orkesta Mendoza. Armed with a newfound love of orchestration, he signed up to put on a show, curated by the Artists and Musicians Healthcare Alliance, an annual NGO-funded series where local groups played a 20-minute cover set. “We covered songs by Buddy Holly, Steely Dan, Paul McCartney and his band Wings,” he says. “They all had to be done as a one-off, and that was the magic of it.”

After a short hiatus from the series, he returned ready to electrify audiences with renditions of songs by Pérez Prado, the king of the mambo. “For me, that was the hardest music to perform,” he says. “It sounds complicated, because there are a lot of instruments. But when you break down the sections of each instrument and the parts, it’s not that hard. By this point, my band had lots of horns, so we took on the challenge of Pérez Prado.”

As it happened, Joey Burns, frontman of Arizona’s desert rockers Calexico, was in the audience for Mendoza’s one-off Prado performance. He was flabbergasted. “Orkesta Mendoza is one of the best live bands out there,” Burns says. “Their music goes in myriad directions, rhythms and modes—big-band orchestrations mixed with lo-fi electronica, vocals en Español combined with moving instrumentals.”

“When our band finished playing, Joey and Peter [a local venue promoter] were telling me, ‘You’re going to do this again!’ So our Prado show turned into an opening slot for Calexico in Tucson!” Mendoza says. From there, Orkesta Mendoza toured big festivals, like San Francisco’s Outside Lands, and played shows in prestigious theatres, like L.A.’s The Wiltern. “We went all over the place. We were a brand new band,” he says. They also locked in their own weekly night at Rialto Theatre, opening for established Latin luminaries like Los Lobos and Ozomatli, which helped generate buzz.

In 2012, Orkesta Mendoza released their debut, the hard-hitting Mambo Mexicano!—a love letter to Pérez Prado full of sweeping violins and rattling horns, as well as party-starting cha-cha-chá, cumbia, and ranchera, all of them tinged with psychedelia. On Mambo, Mendoza displays a knack for crafting sounds that could accompany either a film noir from Mexico’s golden age of cinema, or a modern Latin dance party. Though the album received effusive praise from outlets like NPR, Mendoza took a four-year break from his indie mambo orchestra to play and write with Calexico, DeVotchKa, and Mexrrissey, Mexico’s all-star indie tribute to the Smiths’ singer.

On ¡Vamos a Guarachar!—a cheeky reference to tribal guarachero, an EDM hybrid from Mexico’s border city Monterrey that incorporates Latin American sounds—Mendoza returns with a vengeance. The opener “Cumbia Volcadora,” starring Camilo Lara from Mexican Institute of Sound, could easily ignite a riotous cumbia dance-off; and the ravishing “Misterio,” featuring the gorgeous baritone voice of veteran Salvador Durán, is a haunting huapango lullaby, dimly illuminated by dissonant piano and eerie slide guitar. Peruvian cumbia, also known as chicha, is spun through a kaleidoscope on “No Volveré,” and Tijuana indie rocker Ceci Bastida lends her beautiful vocals in the garage-surf “Caramelos.” The closing “Shadows of the Mind” tips its hat toward boogaloo, delivering a boisterous brass-blaring soul-rock banger à la Ray Barretto.

“Sergio Mendoza is probably my favorite musician of this time,” declares Lara. “He has the cumbia and mambo in his DNA, but he has the power to make it sound like today. His Orkesta is as punk as the Sex Pistols and as violent as Pérez Prado.” Burns agrees: “¡Vamos a Guarachar! is epic and soulful. It captures that positive spirit of the Southwest.”

It’s also not without political subtext. “Redoble,” a western song driven by galloping percussion, takes as its subject matter the great U.S./Mexico divide, lyrically shattering the deplorable link between immigration and criminality. “I came up with this song after someone asked me for my papers at a bar and started preaching about border security,” Mendoza reveals. “Nowadays, you have to be able to identify those who really love you, and those you are out to get you. Watch out for racism.”

“When [global music icon] Manu Chao heard what was happening in Arizona, he came down and visited all the prisons. He sang across the street from Joe [“America’s Toughest Sheriff”] Arpaio’s office. Arpaio was like, ‘Hey, come talk to me,’ and Manu Chao was like, ‘No! I’m here for the people [the prisoners],’” Mendoza says. “So [Manu Chao] did this free protest concert in 2011, where 6,000 people showed up without promotion. He got it right: when something like this happens, you don’t boycott the place, you go and play there.” Orkesta Mendoza and Calexico started a ‘Viva Arizona’ music rally of their own, in the hopes of building solidarity with those in prison.

Today, discriminatory sentiments have coincided with Donald Trump’s rise to power. “He’s bringing out racism in a lot of people,” Mendoza says. “It’s like almost okay to be a racist because of Donald Trump.” The way forward, Mendoza says, is to, “see each other as people, and not judge based on color. That is why I feel like we need to sing and dance to the music that is in my blood—and to do it here in Arizona, where there is always political tension in regards to the border.”

¡Vamos a Guarachar! is a wildly charming, vibrantly-hued document that captures a specifically Mexican and Latin American kind of romanticism. It’s an album packed with punch, passion, and an awareness of its roots. “I love having that gene that brings out the rhythms and Mexican flavors in everything that I do,” Mendoza says. “I want to keep learning more about the music from Mexico and Latin American folklore. I want to continue discovering new things so I can keep adding it to what I do. Being able to mix, combine and reach listeners over here [in the U.S.] and hopefully into Mexico too—that’s the best part of sharing two worlds.”