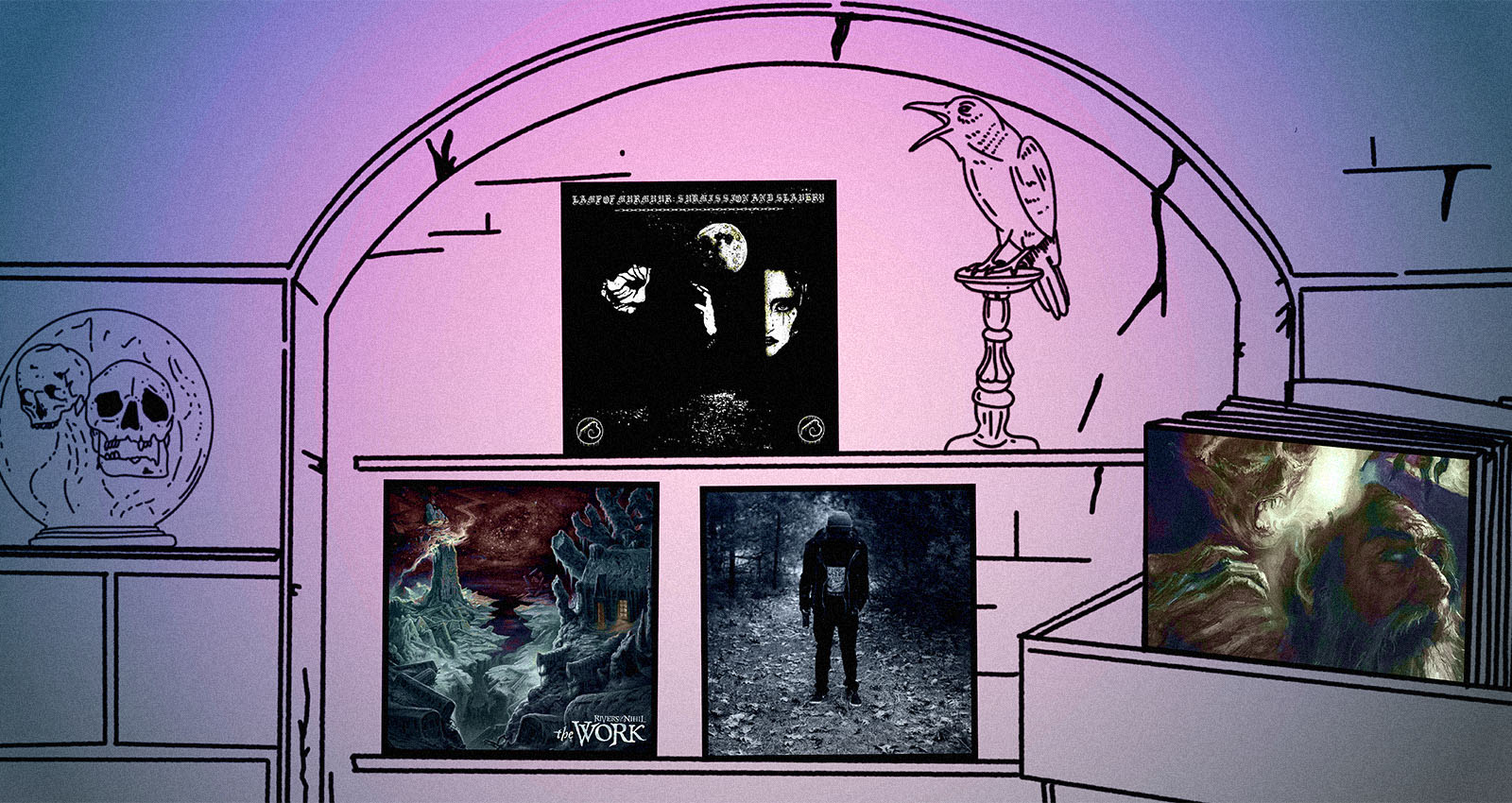 As summer gives way to fall in the Northern Hemisphere, a lot of metalheads will find themselves trading out sweltering death metal riffs and windows-down thrash singalongs for the chillier atmospherics of black metal and doom. September straddles the two seasons, and the month’s best metal on Bandcamp includes records that will sound great whether it’s still hot where you are or you’re busting out the denim jacket.

Doctor Smoke
Dreamers and the Dead

Too few modern metal bands know how to play to the proverbial back of the room—or, if they do know, they’re not interested in doing it. That’s why my heart swells whenever an album like Doctor Smoke’s Dreamers and the Dead comes along. The Ohio band plays heavy metal, no subgenre required. Anyone who’s ever turned the radio up when “The Boys Are Back in Town” comes on will fall in love with them. The 10 songs on Dreamers and the Dead are all perfectly built, self-contained engines of vocal hooks, riffs, and solos. Matt Tluchowski and Steve Lehocky’s dual-guitar attack belongs to the glorious lineage of Lizzy, Maiden, and Priest, and Tluchowski’s gruffly melodic singing voice provides a lower bar to entry than, say, someone imitating King Diamond’s falsetto or Mark “The Shark” Shelton’s yelp. “Accessible” is a word some bands treat like a black mark of shame. Doctor Smoke understand that the opposite should be true. They’re playing to the back of the room.

Sermon of Flames
I Have Seen the Light, and It Was Repulsive

A lot of the music on I, Voidhanger Records seems engineered to confound. Relatively little of it aims to disturb. The debut album by Sermon of Flames, an anonymous duo from Ireland, is as intentionally and viscerally distressing as anything the label has ever released. I Have Seen the Light, and It Was Repulsive is a multi-car pile-up of death metal, black metal, noise, industrial music, and the kind of seasick electronics that might soundtrack a club night in Hell. “Chords Wrung from the Ribs of the Earth” employs what sounds like a dentist’s drill to enact a similar brand of torture, while “Cauldrons of Boiling Piss” drapes Incantation’s cavernous snarl in seemingly infinite layers of pulsating static. The band’s only real peers for this kind of omnivorous sonic torture are acts like Anaal Nathrakh and The Body, artists who understand that metal instrumentation alone can only unsettle a metal-trained listener to a point. It’s the more outré sounds that Sermon of Flames use that make I Have Seen the Light so devilishly effective.

Lamp of Murmuur
Submission and Slavery

Since early 2019, the one-man black metal band Lamp of Murmuur has blessed us with what feels like a nonstop deluge of music. Amid the sea of demos, splits, and EPs, Lamp has released a pair of full-length albums, each one a snapshot of where project leader M’s head was at the point of its release. Last year’s Heir of Ecliptical Romanticism stood out from the boom of bedroom-recorded raw black metal with its stately songcraft and touches of ’80s goth. On Submission and Slavery, those touches have transformed into a full-on stranglehold. The cover art nods to Sisters of Mercy’s essential 1987 album, Floodland, and the closing song is a searing version of Christian Death’s “As Evening Falls.” (Lamp has also covered Dead Can Dance.) Those reference points are integrated seamlessly into the whole—which, to be clear, is still unquestionably black metal. Submission and Slavery is certainly reverent to the Norwegian Second Wave, but it imagines an alternate timeline where Euronymous and Dead hung out at the Batcave. The songs dart between black metal fury and deathrock bounce, fearlessly indulging in extended melodic solos whenever the need arises. The album ends up feeling like a love letter to two sounds that are clearly equally near to M’s heart.

Finland’s Skepticism helped invent the sound that would become known as funeral doom with 1995’s bleakly beautiful Stormcrowfleet. Unlike their scene peers in Thergothon, who made a single LP before fizzling out, Skepticism have been steadily releasing new music since that iconic album. Companion is the band’s sixth full-length, and it’s their most focused, refined work yet. In a surprisingly compact-feeling 48 minutes, they summon the same emotional depth and primordial heaviness they first perfected on Stormcrowfleet, but with a crystalline production that more fully reveals the inner workings of the songs. The piano and pipe organ played by Eero Pöyry remain the emotional core of the Skepticism sound, at times laying down a canvas for Jani Kekarainen’s heart-wrenching guitar, and taking over as lead instrument at others, moaning out what can only be described as funereal melodies. If Companion is a devastating listen, it’s also a perversely uplifting one. It feels at once like the acceptance of inevitable death and the urge to create beauty in spite—or perhaps because‚ of life’s impermanence.

How do you follow the greatest comeback album of all time? That’s the challenge Carcass faced when they set out to make Torn Arteries, their first full-length since 2013’s Surgical Steel dropped all their doubters into a meat grinder. The Liverpool band first hung up their guitars (and scalpels) in 1996 after the release of their death ‘n’ roll oddity, Swansong. They returned with what could convincingly be argued is their best album. Torn Arteries doesn’t bear the same burden of proof that Surgical Steel did, but Carcass still sound hungry. The new album is home to some of their catchiest hooks (“Eleanor Rigor Mortis”) as well as their most ambitious song structures (“Flesh Ripping Sonic Torment Limited”), and the 35-year musical relationship between co-bandleaders Jeff Walker and Bill Steer only continues to deepen. Torn Arteries isn’t the obvious game-changer that Surgical Steel was when it landed eight years ago, but the continued existence of a sturdy, reliable Carcass may be an even more precious thing.

The Osseous Key is the first proper album from Pete Rodway’s Alghol project, but the Mainer already shows impeccable command over his craft. Over the course of seven black metal songs and a dungeon synth outro track, Rodway builds a richly rendered world that serves as the setting for a grim tale of a destiny fulfilled, a throne usurped, and the rise of a new tyrant king. Coming straight out of the gate with a heavily narrative-forward concept album is a bold move, but Rodway pulls it off with his sheer commitment to the bit. His black metal is less sonically raw than what a lot of his peers are making, and the relatively clean production style of The Osseous Key really brings out the driving, rock ‘n’ roll nature of so many of his riffs. They’re typically underpinned by atmospheric synths ripped straight from the ’90s Norwegian black metal playbook, and they lend everything a nostalgic, faux-epic sheen. One album in, Alghol is already a band to watch.

I’ll come right out and say it—I tried to understand the Afro-Brazilian religion of Quimbanda while getting my head around Mehenet’s Ng’ambu, and I failed. Loads of black metal bands use their music to explore esoteric philosophies and ritual magick and things of that nature, and I’ve never once understood what the hell any of them were talking about. What I can say about Mehenet’s engagement with Quimbanda is that it feels deeply rooted in their culture, and that it gives their album a sense of place. The band comes from New Orleans, a city with a rich history of the occult, and Ng’ambu feels alive with that energy. “Horse to the Earth” opens with the sounds of a zydeco band playing over the din of barking dogs, dropping the listener into the French Quarter before treating them to a paroxysm of wild-eyed black metal howling. Elsewhere, on songs like “In the Garden of Suicide,” traces of the city’s punk heritage turn up in sweaty passages that teeter on the brink of collapse. I still don’t know what Quimbanda is, but Ng’ambu is good enough that I’m going to keep trying to learn.

Rivers of Nihil
The Work

Rivers of Nihil’s last album, Where Owls Know My Name, surprised a lot of people. Suddenly, the Pennsylvania melodic death metal band could drop effortlessly into Dream Theater-style prog, or deploy a smooth jazz sax solo in the middle of their songs. How did that happen? Owls was a blast, but it could be a bit jarring at times as the band found its footing on their new musical path. On its follow-up, The Work, Rivers of Nihil double down, pushing further away from death metal and deeper into prog. It’s a better record than its predecessor, precisely because of how deeply committed it is to its adventurous streak. Ostensibly a concept album about the importance of putting time and energy into what you want to be great at—“Do the work” is a refrain that appears on several songs—The Work often feels like a well-deserved celebration of its makers’s musical growth. Frontman Jake Dieffenbach sings cleanly at least as often as he screams, and guitarists Brody Uttley and Jon Topore now sound as comfortable creating soundscapes with washes of effects as they do blasting out melodeath riffs. They did the work, and now they can reap its rewards.