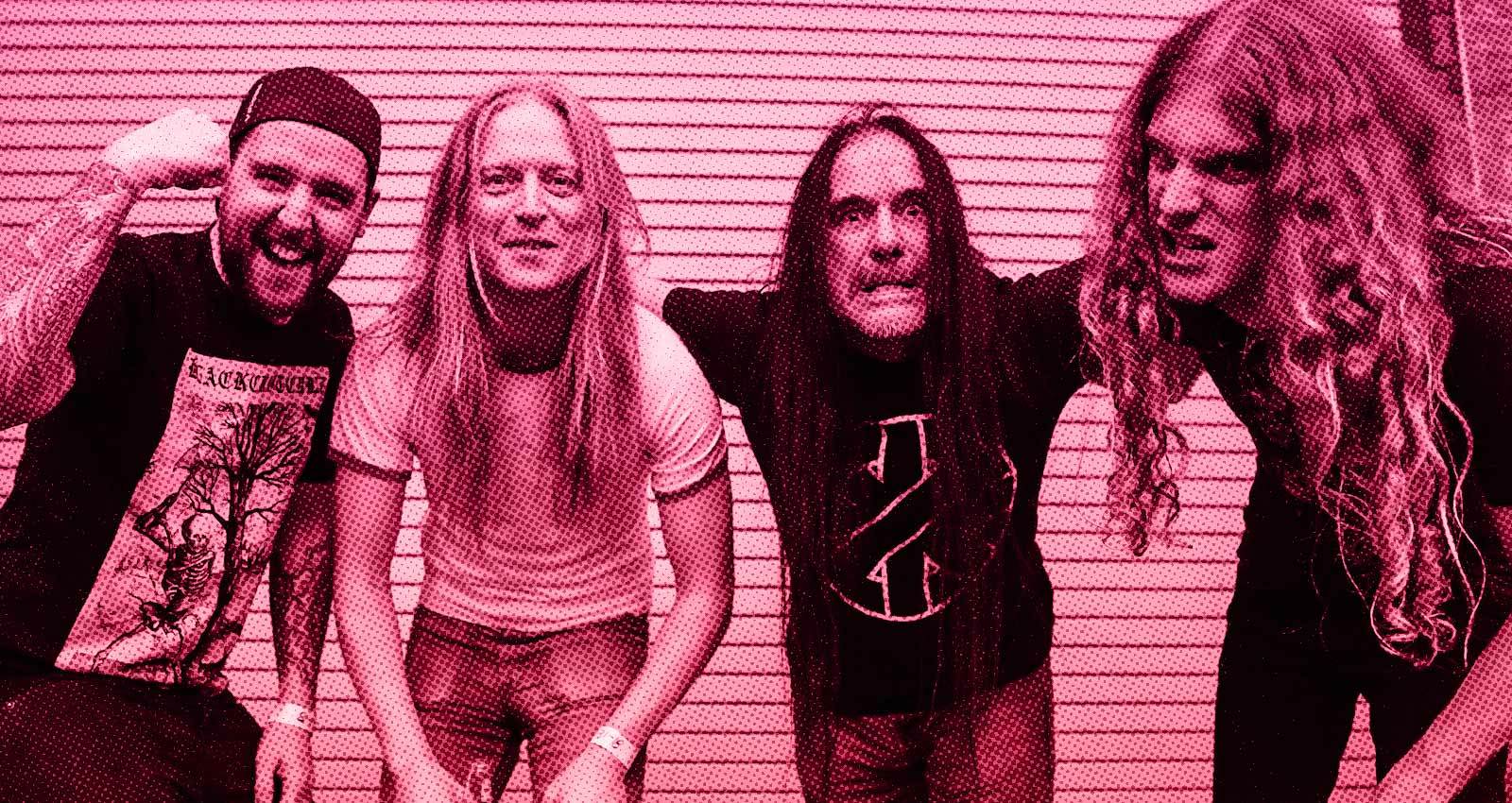 Seventeen years after the dissolution of the Beatles, another shaggy-haired Liverpudlian foursome sat down to write a kind of response track to a Paul McCartney-penned classic. They called it “Festerday.” The version that appeared on the band’s demo tape clocked in at 18 seconds, but the take that ultimately made their proper full-length debut was expanded to a luxurious 22. Such was life in the halcyon days of English grindcore, of which Carcass was a primary driving force.

Within a few short years, Carcass would also become a linchpin for no less than three other distinct subgenres—deathgrind, melodic death metal, and death ‘n’ roll. Led by the double-headed monster of Jeff Walker and Bill Steer, the band moved fluidly through the hinterlands of extreme metal, partly because no one had made any rules saying they couldn’t, and partly because they wouldn’t have respected those rules anyway. The exploratory spirit of the band was evident in each successive album they released, which never sounded like the one before it, but always sounded like Carcass.

Carrying them through it all was their sense of humor—not typically a prized attribute in metal, but undoubtedly the defining feature of the band. From an appearance on the cult sci-fi comedy series Red Dwarf, to lyrics about profitable commercial farming using human fertilizer, to the fearless deployment of dad-joke puns in song titles, Carcass have never fallen into the trap of self-seriousness. In a genre whose early days were dominated by grim-faced Americans and Swedes, their dedication to taking the piss felt distinctly British, part of a heritage that runs through Monty Python as much as it does Motörhead.

Every album Carcass released between 1988 and 1993 can be considered a canonical classic, and even 1996’s breakup-inducing Swansong has earned reappraisal since initially landing with a thud. They’ve since managed the rare feat of successfully executing a comeback following a long hiatus. After resharpening their chops onstage for a handful of world-conquering tours, they returned with 2013’s Surgical Steel, a strong candidate for the greatest comeback album of all time and one of the best metal records of the 2010’s. Now, they’re releasing Despicable, a four-song EP that shows the well is nowhere near dry. Here’s a guide to the band’s essential releases.

A year after Napalm Death’s Scum and a year before Terrorizer’s World Downfall, Carcass unleashed Reek of Putrefaction, an album that fit broadly within the burgeoning grindcore movement but defied many of its principal tenets. There are no trenchant leftist politics on Reek, though Walker and Steer (himself a member of Napalm Death at the time) were certainly down with the cause. Instead, it contains songs with titles like “Genital Grinder,” “Vomited Anal Tract,” and “Fermenting Innards.” That might seem like faux-edgy provocation, and at some level, it was. But it also showed that Carcass meant business in pushing heavy music to new extremes. The band rips through 22 songs in 39 minutes, with a bare-bones, primitive production style that makes the rumbling bass, chunky guitar, and guttural vocals hit the listener as one enormous brick of sound. Compared to the band’s later, more accessible work, Reek is an acquired taste. Once acquired, it’s addictive.

The first big leap Carcass made was on their second album. Symphonies of Sickness retains the bludgeoning primordialism of Reek of Putrefaction, but in production, musicianship, and self-assuredness, it’s a massive step up. By the time Symphonies dropped, grindcore had begun to fracture into punk and metal offshoots. Carcass were decidedly a metal band, and Symphonies is often considered the first deathgrind album. It’s clearly conversant with what was happening in the death metal scenes in Tampa and Stockholm, but it very consciously stands apart from them. Steer was still the lone guitarist in the band at this point, and you can hear him stretching the boundaries of his playing on Symphonies. The riffs are more complex, the solos are more expressive, and his performance is tighter. He anchors an album that is loaded front-to-back with Carcass classics, one that’s deeply satisfying in a vacuum while also being a clear harbinger of greatness to come.

Carcass were never more formally ambitious than on Necroticism, despite the fact that it’s a transitional album of sorts. The band’s grindcore roots had mostly been excised from their sound by this point, but they had yet to fully embrace arena-metal melodicism. The result is an album of towering riffage, ingeniously employed leitmotifs, adventurous song structures (and sonics), and a festering pile of warped-yet-infectious hooks. It’s the first Carcass album to feature Michael Amott (later of Arch Enemy) on second guitar, and Steer sounds invigorated by having someone to weave in and out of riffs and trade solos with. Jeff Walker also steps into a more-or-less-full-time frontman role, honing his venomous snarl into a much more effective weapon by making it possible to understand what he’s singing from time to time. “Inpropagation,” “Corporal Jigsore Quandary,” and “Incarnated Solvent Abuse” are three of the band’s best-loved songs, but the deep cuts on Necroticism are every bit their equals. There hasn’t been album quite like this before or since.

It’s often said that At the Gates unwittingly invented metalcore when they released their melodic death metal masterstroke, Slaughter of the Soul. That’s probably partly because the metalcore kids couldn’t play well enough to mimic Heartwork. Carcass’ fourth album is Patient Zero for the melodeath sound that would come to define the Gothenburg scene and eventually spawn bands like Killswitch Engage and Shadows Fall. Defined equally by its relentlessly dialed-in musicianship (the title track, “This Mortal Coil”) and its fat, MTV-courting grooves (“Buried Dreams,” “No Love Lost”), Heartwork brought Carcass a kind of minor rock stardom that death metal bands don’t often get to enjoy. It was the last album in their career-opening winning streak, but it wouldn’t be their final masterpiece.

For a lot of Carcass fans, Swansong is where they took things too far. Melodic death metal gave way to the nascent style known as death ‘n’ roll, a move that Entombed fans had hung them for just a few years prior when they dropped the comparatively radio-friendly Wolverine Blues. While it is a bit jarring to hear Jeff Walker singing what are essentially souped-up alt-rock songs, Swansong is not without its demented charms. “Keep on Rotting in the Free World” is a knowing wink of a Neil Young takeoff, “Black Star” could camouflage itself on a Pantera record without getting caught, and “Go to Hell” closes out this era of the band’s career on a gleefully nihilistic note.

A cardinal rule of rock ‘n’ roll is when a band says they won’t get back together, don’t believe them. A decade after Carcass’ 1996 split, the rumblings that they might reunite started in earnest, and by 2008 they were playing festivals and touring clubs, with Arch Enemy’s Daniel Erlandsson replacing original drummer Ken Owen, who suffered a brain hemorrhage in 1999. It took another five years for the first taste of new music to come out, but it proved to be well worth the wait. Surgical Steel is the best-case-scenario for a comeback album, a record that feels fresh and inspired but celebrates everything you loved about the band in the first place. Musically, it’s the missing link between the epic scope of Necroticism and the melodicism of Heartwork, but it could only have been made by the older, wiser versions of Walker and Steer. All those years off ensured they’d come back stronger than ever, and there’s a legitimate case to be made that Surgical Steel is the finest Carcass album.

There’s been a slow trickle of material from Carcass since the release of Surgical Steel, including a collection of tracks from that album’s cutting room floor and a remastered cache of early BBC recordings with the legendary John Peel. Despicable isn’t meant to be heard as a collection of odds-and-ends or a pile of outtakes; it’s a brand-new Carcass EP, full stop. That makes it both inherently exciting and tantalizing in its brevity. All four songs here meet the high standard established for Carcass Mk II on Surgical Steel, and thanks to the relatively low stakes of their release, they’re also just a hell of a lot of fun. “The Living Dead at the Manchester Morgue” is a Hammer horror matinee of a song, all camp and madness. “The Long and Winding Bier Road” could be a soccer fight song in a much weirder, much cooler parallel universe. Whether these four songs are a precursor to a new album or not, they’re a welcome salve for a troubled time. Keep on rotting in the free world, indeed.