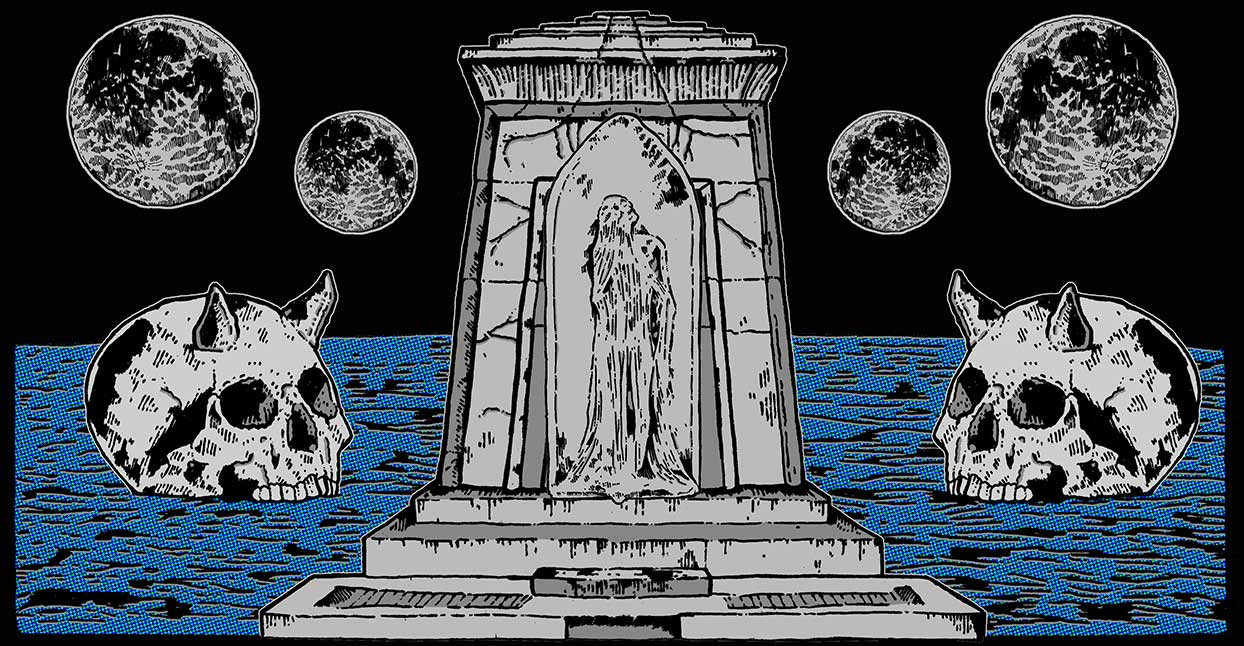 Although the seeds of heavy metal’s many subgenres were planted in the 1980s, the early 1990s saw death metal, black metal, grindcore, and more blossom into quests for maximum extremity. Somewhat counterintuitively, doom metal experienced a similar moment of seemingly accidental intensification in the early ‘90s, when a number of bands with death-metal roots began deconstructing that genre by taking the bedrock principles of doom—slow, dark, and heavy—to their natural endpoint. It is from this context that funeral doom was born.

Funeral doom eschews most outward aggression in favor of outright sloth, gradually developing themes, and keyboards that imitate pipe organs. Although one can interpret funeral doom as either an extreme form of doom or a restrained form of death metal, as the genre developed, it also displayed clear musical sympathies with goth, darkwave, and shoegaze. For most other styles of heavy metal, riffs are the essential building blocks, with any atmosphere either added on top or emerging naturally from the spirit of the riffs. With funeral doom, the formula is reversed: the atmosphere is the stuff of life, and whatever riffs exist are there to mark the indifferent passing of time. This ensures that the listener’s ear is drawn to every individual note as if it’s an essential brick in the architecture. In that way, it’s not hard to experience funeral doom in the same way one might experience The Cure’s Disintegration or My Bloody Valentine’s Loveless, as fully immersive albums where the songs are secondary to the sound.

Two of the most critical precursors to funeral doom were Paradise Lost’s Lost Paradise and Cathedral’s Forest of Equilibrium. Although both bands would later take very different directions, those debuts (released in 1990 and 1991, respectively) play out as slow, sparse, and almost punishingly bleak; the latter, in particular, has since come to be regarded as one of the earliest blueprints for death/doom, a subgenre that more or less proceeded in parallel with funeral doom. Over on the American side of the aisle, the New York band Winter’s Into Darkness LP—also released in 1990—dragged Celtic Frost’s patented death-stomp down into an even more menacing trudge.

The story of funeral doom, however, truly begins in Finland, with the work of Thergothon and Skepticism. Thergothon formed first, and were for all intents and purposes a death metal band on their 1991 demo, pushing back against that genre’s rapidly congealing orthodoxy; they followed it up in 1994 with the unimpeachable Stream from the Heavens, cited by many as the first true funeral doom album. Skepticism weren’t too far behind, releasing the genre’s foundational masterpiece, Stormcrowfleet, in 1995. Further bolstering Finland’s role in funeral doom’s origin story were the doomsayers in Unholy, whose terminally-grim doom/death rubbed off on the aforementioned influencers thanks to two crucial (and perennially underrated) albums, 1993’s From the Shadows and 1994’s The Second Ring of Power.

Finland’s claim to funeral doom might be preeminent, but it is hardly exclusive. England’s Esoteric released their first demo in 1993, and while Australia’s Disembowelment fall much more clearly on the death/doom side of the fence, their classic 1993 album Transcendence into the Peripheral was hugely influential on the development of the genre (in no small part because of a wider distribution courtesy of Relapse Records). Lastly, New Jersey’s Evoken released one of the first American examples of the form with their 1994 demo Shades of Night Descending. No matter where funeral doom sprang up, though, its acolytes all worshipped at the same altar of atmosphere.

Throughout its 25-year history, funeral doom has seen considerable expansions in geography as well as stylistic diversity. Thus, while its ranks have always included bands continuing to hone the classic sound of the genre, there are also bands pushing at the margins and blending that sound with other styles. Accordingly, this guide highlights both ends of the spectrum, comprising four bands in the traditional funeral doom mold, followed by four bands who’ve mutated the genre’s preexisting DNA entirely.

Whereas Thergothon’s Stream from the Heavens is the funeral doom equivalent of Black Sabbath’s self-titled debut—a sine qua non for all that followed—Skepticism’s Stormcrowfleet represents the subgenre’s Paranoid: an album that brought into tactile, inescapable reality all the germinal ideas of the former. Eero Pöyry’s keyboards hover somewhere between a pipe organ and a Rhodes, lending each song a dense, intoxicating atmosphere. Lasse Pelkonen plays his drums with mallets like a timpani, and makes only the sparest use of his snare; as a result, there is very little aggression to the band’s sound, only sustain and decay. The marvelous Finnish label, Svart Records, has just reissued Stormcrowfleet for the very first time on vinyl, with an entirely new mix collected from the original tape reels. If you’ve lived with and loved this album for years, hearing the new mix is an absolute revelation, as it bears several tangible differences from the original; the bass has been pulled back slightly, and all the other elements have been cleaned up and given more space in the mix. Even with these tweaks, Stormcrowfleet’s suffocating majesty remains unchanged, further solidifying its classic status. Truth be told, there may be no better funeral doom album.

Mournful Congregation
The Book of Kings (2011)

Australia’s Mournful Congregation formed contemporaneously with the first wave of ’90s funeral doom bands, but they didn’t release a full-length until 1999. That pause may have allowed them to survey the expanding field and craft their own niche more readily than if they had been first out the gate. Though steeped in the hallmarks of funeral doom—incorrigibly slow tempos, diaphragm-busting deep growls, and an unshakable air of futility—Mournful Congregation more often includes tranquil acoustic passages and the sort of doomed romanticism of My Dying Bride. With 2011’s The Book of Kings, mastermind Damon Good and company finally achieved their apotheosis. The midsection of opening track “The Catechism of Depression” features grief-stricken twin guitar leads that sound in the best way like Tipton/Downing playing concrete frets in molasses, and the 33-minute title track is an entire world unto itself, with each section unfolding like the crashing of waves. The guitar theme that enters just before the 23-minute mark, eventually doubled by a ghostly choir, provides easy proof of how, sometimes, it’s the finest sounds that hurt the most.

Finland’s Colosseum reveal yet another truth about funeral doom: even if you cram it full of other stuff, the granite pendulum of its unrelenting creep remains. Following in the footsteps of Shape of Despair, Colosseum drench their sounds in hazy synths and other accompaniments, so as to balance sensory maximalism with experiential minimalism. Opening track “Numquam” backs its riffs with synthesized string stabs which, while fast by comparison, only underscore the music’s monolithic burden. Meanwhile, the trumpet on “Towards the Infinite” adds a regal note as if the band is heading a coronation procession for some anonymous demon king, while on “Demons Swarm by My Side” descending flute arpeggios commingle with chiming lead guitar in a beautifully morose and leaden waltz time. Tragically, Colosseum disbanded shortly after this album following the suicide of principal songwriter Juhani Palomäki, which makes the radiant, dark beauty of their three excellent albums shine all the brighter.

Whereas many funeral doom bands use lush soundscapes and yearning melodies to leaven their march to the grave, others simply start low and then go lower. The sole album from Arizona’s Catacombs is precisely such an exercise in gleefully nihilistic doom. In fact, if funeral doom has an equivalent to the no wave bleakness of the very earliest Swans albums, this might be it. Sole member Xathagorra’s Lovecraftian concept album doesn’t need anything other than guitar, bass, drums, and vocals to drive its pitiless nails in, as it lurches inexorably forward with the same abject punishment as Cathedral’s debut, or perhaps the earliest Anathema demos. There’s little melody, little light, and little break from the plodding cascade of decrepit riffs. What could be better? Iä! Iä! Cthulhu fhtuneral doom! 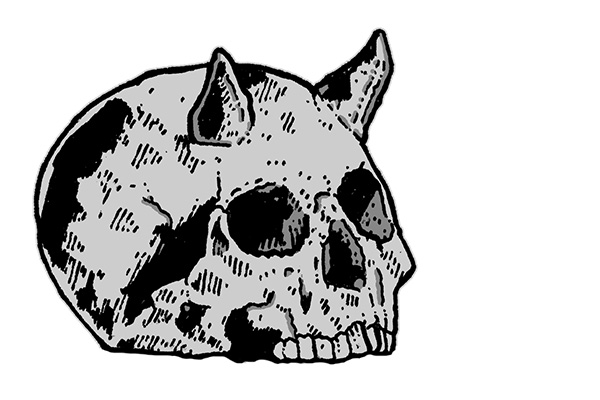 England’s Esoteric are not often credited for being one of the pioneering voices of funeral doom given that their sprawling debut album, Epistemological Despondency, was released the same year as Thergothon’s Stream from the Heavens. Despite their deserved status as a cornerstone of the genre, they are being highlighted here as a non-traditional type of funeral doom for two reasons. First, with their more actively aggressive riffs and bilious vocals, they often hew closer to the death/doom of Disembowelment. Second, and more importantly, Esoteric’s vision of funeral doom skews massive, awash in harsh effects and wild psychedelia. The gnawing, slowly-climbing crescendo of shrill guitar noise and effects-mangled vocals that occupies most of the first third of “Bereft” alone is enough to send one clawing at invisible insects. Whereas the stately lilt of the classic Finnish sound is like a glass of fine red wine, Esoteric make music for red-eyed, skin-crawling bad trips. Imagine if Monster Magnet’s Dave Wyndorf had been weaned on Katatonia’s Dance of December Souls instead of the Stooges discography—and then, throw your imagination in the nearest garbage disposal and listen to Esoteric instead. That’s just how essential it is.

The Minnesota band Celestiial’s approach to funeral doom is always on the verge of dissolving into either neofolk or pure ambience. Their debut album Desolate North contains deeply meditative music, with cripplingly slow waves of bass and fuzzed guitar mingling with the sounds of rushing water and calling loons. Celestiial’s guitarist and vocalist, Tanner Anderson, also serves as the driving force behind the remarkable melodic black metal band Obsequiae, and accordingly, his harp accompaniment makes Desolate North resonate sympathetically alongside that project. If you imagine ringing a single bell in a vaulted cathedral space, listening to the tone recede to the exact point where you can no longer distinguish between the tone and the ambience of the room, then you’ll have a pretty good idea of the band’s guitar tone, which sometimes barely registers as distortion above the treble of the crashing cymbals. A rich, restorative, and mesmerizing album, Desolate North is music of the North woods, by the North woods, for the North woods.

Given its terrifying vastness and insistent, undulating rhythms, the ocean is a natural thematic choice for funeral doom. Germany’s Ahab notwithstanding, however, few funeral doom albums have better embodied the plangent tones of the sea than the one-man Belgian project Slow’s V – Oceans. A continuously unfolding piece in five parts, V – Oceans spends enough of its time in slow “crash and echo” mode to justify the funeral-doom tag, while trafficking in the chiming beauty and driving crescendos associated with post-metal titans like Isis or Cult of Luna. Album centerpiece “Déluge” churns in a glacial two-step, oscillating between the root and its minor fifth, driving the tension to a near-breaking point; in its final moments, the sky finally cracks, giving way to a furious drum barrage. Ultimately, V – Oceans emerges as an awe-inspiring evocation of the waters which birthed life as we know it, and the tidal forces that which will inevitably lap our bones clean.