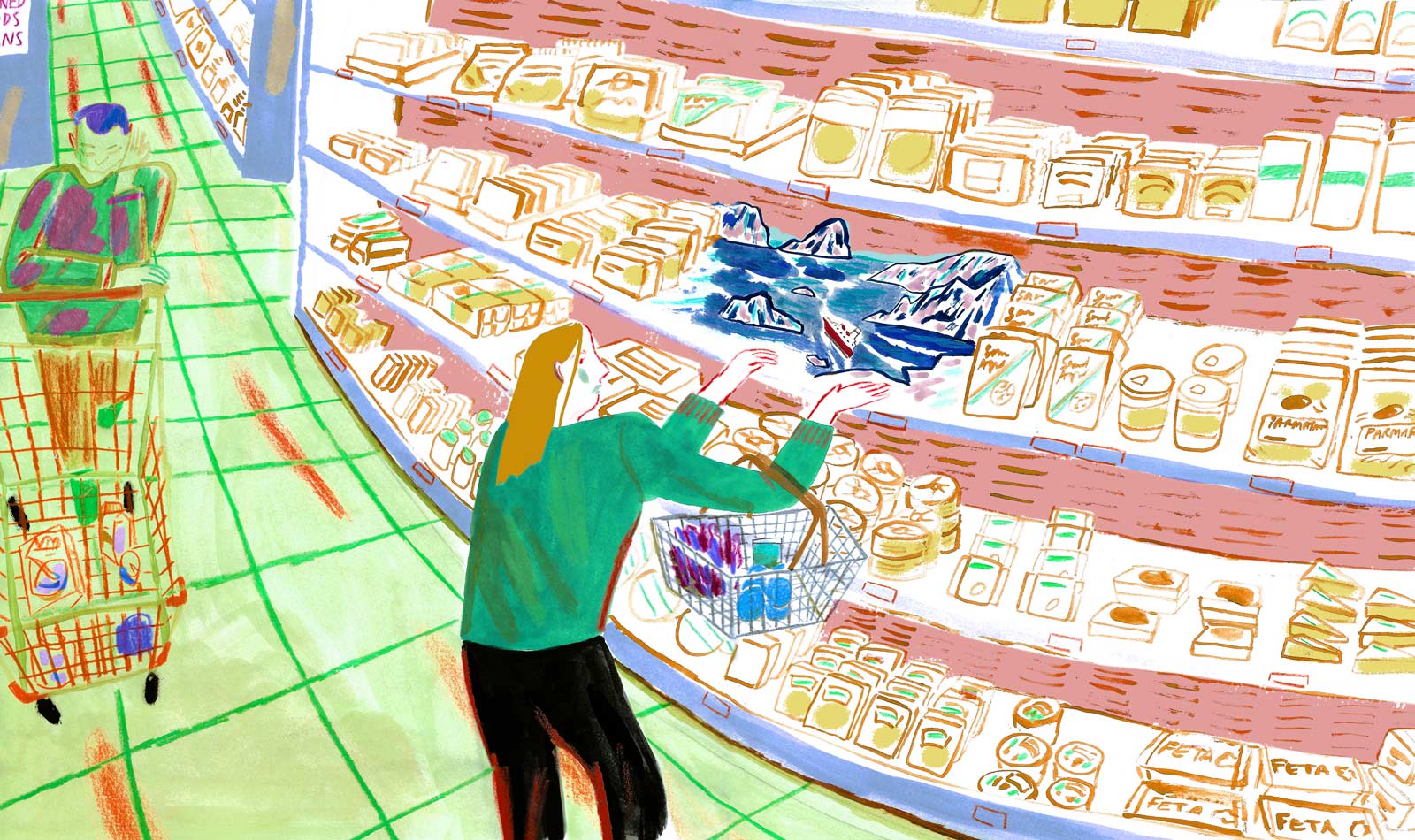 Sometimes, when I’m standing in a supermarket choosing between 25 different types of cheese, I think of Antarctica. Memories of monolithic icebergs the size of skyscrapers shortcircuit my brain while I’m on long train rides and waiting in the queue at the post office, too.

It’s 2013, and I’m living on a 23-meter steel-hulled yacht with a bunch of strangers from Australia, New Zealand, Scotland, and England. This motley crew of grizzled war veterans, record-breaking sailors, hardy mountaineers, and hardened camera operators are my co-workers, roommates, and surrogate family as we pull together to work on a documentary project in Antarctica.

When I was offered the job, I knew it was a tough ask for someone like me. I had zero seafaring experience. I enjoy solitude; living, working, eating, and sleeping in close quarters with a bunch of strangers would test me. But I’m also stubborn and smart enough to know that if I said no, I’d regret it for the rest of my life.

We’d spend about seven or eight weeks on the boat (time is elastic when you’re at the mercy of the weather gods) sailing to King George Island, the Antarctic Peninsula, Elephant Island, South Georgia Island, and finally, Islas Malvinas (or the Falklands Islands, depending on where you’re from). Leaving the port of Ushuaia in Argentina on the third day of a brand new year, a gentle breeze reveals nothing about what’s to come. By nightfall, we’ll be heading south to Antarctica through the Drake Passage, a notoriously rough patch of ocean between the southern tip of South America and Antarctica. I’d already had nightmares about the crossing, so before we set sail, I ask about the EPIRB (Emergency Position Indicating Radio Beacon). I’m bluntly told that it will let everyone know where we all died. Great.

Despite my fears, I accept that crossing the Drake Passage is the price you pay for entry to the greatest show on earth. After all, there’s no heaven without hell. On my first night at sea, a huge wave hits the yacht with such ferocity that I’m catapulted out of the top bunk and dumped unceremoniously on the floor below. I’m terrified. But I’m also stuck in a hypermasculine environment where admitting you’re afraid is neither wise nor welcome. My instincts tell me to get the hell out there by any means. But there are no means. There are no coast guard or rescue helicopters. The nearest land is hundreds of nautical miles away. On any given day, the satellite phone may or may not work. The only way out of it is through it.

Crammed into a corner on the floor, I pull my knees up to my chest, grab my iPod and jam the earbuds in my ears. With a sense of frantic urgency, I start scrolling to find something, anything, to drown out the screaming wind and loud booms of the waves hitting the yacht like rhythmic car crashes. Psychologists recommend listening to soothing tunes to alleviate anxiety. Forget pan pipes and wind chimes—I need a strong, loud, stirring gut punch to blow the panicky thoughts right out of my skull.

Scrolling through the music I downloaded before we left civilization, every song I try listening to runs off me like I’m made of Teflon—until I find “Storm,” the opening track of Godspeed You! Black Emperor’s Lift Your Skinny Fists Like Antennas To Heaven, an acclaimed album released in 2000.

I can remember the many times that friends have introduced me to new music that’s blown my mind, but when it comes to GY!BE, I’ve got nothing. I simply have no idea how the Canadian post-rock group ended up on my old silver iPod Nano. Like The Man Who Fell to Earth, Lift Your Skinny Fists Like Antennas To Heaven appeared out of nowhere. I also have no idea who GY!BE are or where the band members are from. And without the ability to Google anything, I have no way of finding out. I am in a rare, search engine–less vacuum where mysteries like this remain unsolved. All I have is the music. So, I listen. Hungrily. Obsessively. Repeatedly.

Turns out, I’d chosen a doozy of an album to accompany a long voyage into the void. A four-track, 87-minute double album that rewards a patient listener with few distractions, I was in the perfect place to become a GY!BE convert. This isn’t radio-friendly, feel-good music you put on at a party (or maybe you do and out yourself as the resident weirdo.) Like cilantro and Lars Von Trier films, file it under “acquired taste.” After all, not everyone is into 20-minute songs bookended by field recordings of freight trains, gas station announcements, and street preachers.

A 22-plus minute instrumental track broken up into four movements, at first, “Storm” sums up the gnarly sensation of sailing with a strong wind at your back (the closest I’ve ever come to feeling like I’m flying). As the song unfolds, it channels the bleak feeling of sailing into punishing headwinds. From the surging strings, guitars, and trumpets to the ominous pulsing of drums signaling grim times ahead to the jarring audio from cities I was so very far away from, this puzzling song placed within an even more puzzling album enthralls me. An opus as unpredictable as the ocean I’m sailing across, the music galvanizes me to stand up and accept the experience instead of feeling like a small, fragile victim buffeted by a cruel, malevolent sea. From joyous to sorrowful, triumphant, and at times menacing, this strange track comes to me at the exact time I need it.

Over this long voyage, I experience every human emotion possible, sometimes all in one day. During intense weather, I’m full of fear but also gratitude for the stoic crew keeping us afloat. I also develop a deep appreciation of the humble vessel we call home. Unlike the Wagyu-and-caviar-laden superyacht we encounter (owned by an American billionaire private equity investor, of course), our modest boat is an aging workhorse capable of taking a beating.

We, too, take a beating. Our camera operator cops a blackeye from being thrown face-first into the ceiling when a big wave smashes the boat sideways. My legs are a patchwork of bruises, a living record of the swell that’s battered us along the way. Despite moments of terror, I’m also acutely aware of just how lucky I am. I could be stacking shelves in a suburban supermarket or sitting in an airless office cubicle.

On most days, there’s nowhere else on earth I’d rather be. But who wouldn’t? I get to watch albatross carve up the sky, icebergs floating in water so clear it’s hard to spot where the icebergs end and their reflections begin, and a night sky so alive with celestial action that I lose feeling in my fingers, toes, and face while watching shooting stars streak across the sky. I’m acutely aware that I’ll likely never be here again and that soon I’ll return to the banality of traffic jams and tax assessments.

I left Australia in late December. By the time I return home, it’s March. Back on land, I get reacquainted with things I’d missed for months: coffee, friends, privacy. I buy the entire GY!BE back catalog, but if you asked me to identify anyone from the band, I couldn’t. They could pass me on the street, and I’d never know. The interview-shy band members mostly haven’t yielded to the publicity demands the recording industry imposes on artists, so they’re free to create music and engage with listeners on their own terms.

Almost ten years later, “Storm” is still my go-to when I’m feeling, ahem, all at sea. The “sailing into rough seas” metaphor may be hackneyed, but it’s in our vernacular for a reason. Sometimes, life feels remarkably like sailing into a squall. Parents die. Friends are diagnosed with incurable diseases. We’re betrayed by the people we love and humiliated by power-hungry bosses. And through it all, we steal small victories and fleeting moments of joy.

In 2016, I finally get to see GY!BE play live. It’s a hot, humid night in Sydney, a city I once called home but no longer feels like it. Crowded into a huge, steamy tent in an urban park, a mixture of tears and sweat roll down my face and neck. As they start to play a movement from “Storm,” I lift my skinny fists like antennas to heaven and think of Antarctica.

Jo Stewart is a freelance writer based in Victoria, Australia. Her work has been published in The Guardian, Monocle, Rolling Stone, and beyond. Twitter: @jostewartwriter