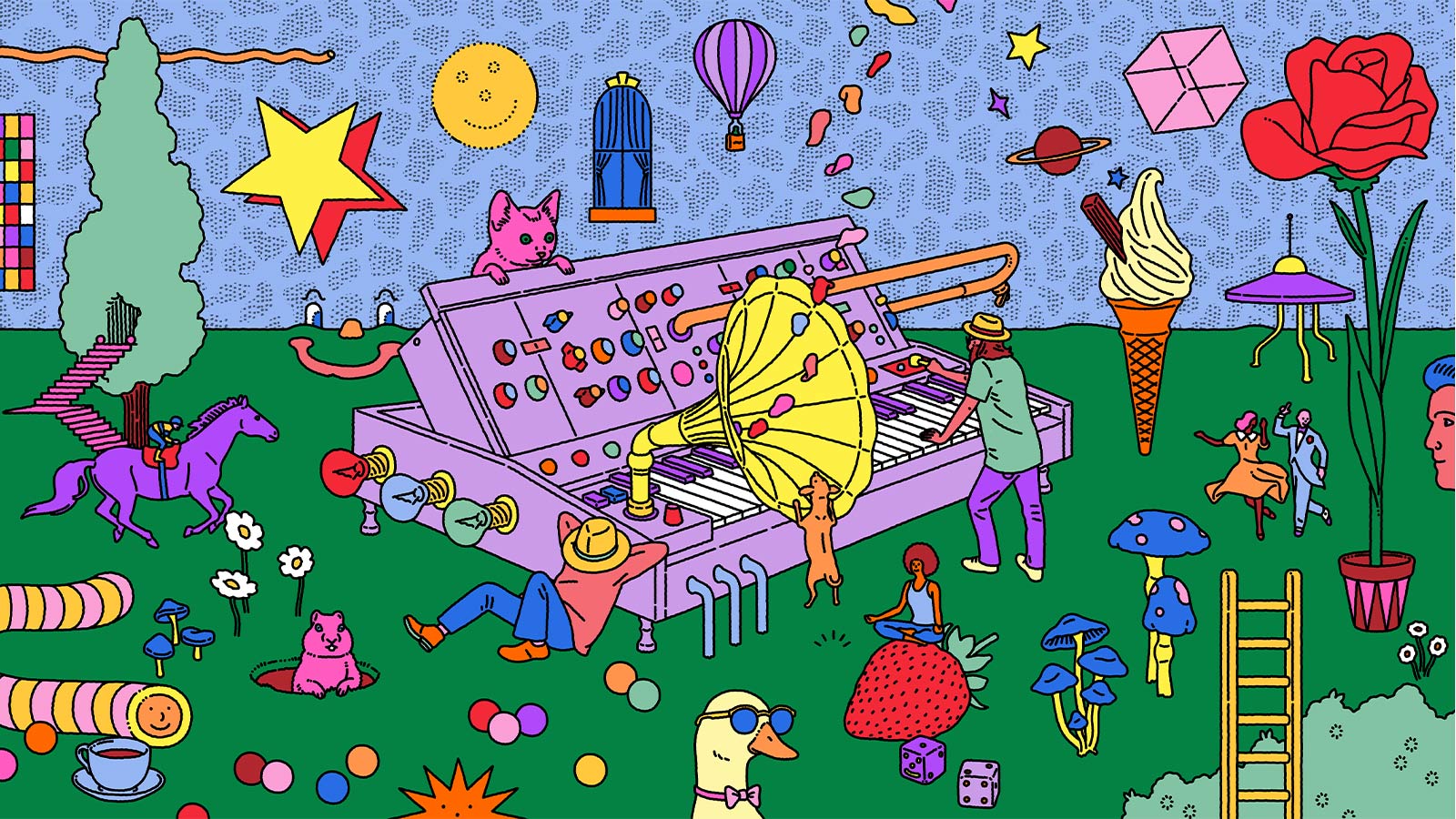 The massive ziggurat of the Tyrell Corporation floats above the haze and rain of 2019 Los Angeles in the 1982 film Blade Runner. As a flying car approaches the tower, Vangelis’s soundtrack rises to its most magnificent heights. Tyrell’s quarters are a utopian oasis floating above the decay on the ground, and the synthesizer music is its expression in sound. It’s a gorgeous moment, extending a line of visions of utopia above in both science fiction films and music that began with Fritz Lang’s Metropolis (1927). Though often considered a silent movie, Metropolis was originally paired with a Wagnerian orchestral score by Gottfried Huppertz meant to be played live, and the operatic manner of the music further positioned Lang’s expressionist film as an opera that presented the literal heights of the intellectual classes as an Elysium.

Like much new technology, synthesizers come with the utopian promise that a better machine or improvements to an older one represent real progress in the course of human social history. That this is rarely true is not the machines’s fault; rather it’s the veil of materialism as amelioration that we tend to pull over our own eyes in lieu of actually fixing anything. Still, musicians like Vangelis have used synthesizers to create utopian sounds fit for a world where things aren’t just better—they might be perfect. This is both material and spiritual, bounded on one side by the formal precision and sleek elegance of Kraftwerk, and on the other by the transcendental soundscapes of krautrock bands like Ash Ra Tempel and CAN and the Berlin school of modular synthesizers, heavy sequencing, and large scale, cinematic pieces launched by Tangerine Dream and Klaus Schulze. Each arpeggiation and filter sweep is music stripped down to bare effect, an argument that the tools of electronics can make a utopian architecture in music, and maybe one in real life too. And Dieter Moebius, from Cluster, contributed his own electronic score to Metropolis, a synthetic update of a past utopia.

There are worlds like this on Bandcamp, too: music made within the relative perfection of the binary exactitude of CPUs and the molded waves of patch cords that carves time into symmetrical, sequenced building blocks, cleansing the darkness with the warmth of a few volts of alternating current.

Behind The Sky Music
Portals

This exceptional collection, curated by electronic musician and DJ Bluetech, is a primer in the utopian sound of music that comes from the Berlin school. As written in the liner notes, the album features “enough analog and modular synths to build a rocketship,” wielded by some of the finest contemporary synthesizer musicians, including Ian Boddy, Steve Moore, and Johnny Woods. The 13 tracks are distinctive and show the expressive possibilities, and the sheer beauty, that can come out of the musical building blocks that are modular synthesizers. And while there are plenty of dark and intense moments, the overall feeling is one of optimism, even exhilaration.

Also emerging from the Berlin tradition, but further afield compositionally, is the great Caterina Barbieri. Computation is at the heart of this album, as the music is made using complex sequencing and pattern-building—architecture, systems- and world-building in sound. Barbieri’s stated goal is to create “a sense of ecstasy and contemplation,” and as the patterns fall into place, the music edifice grows taller, wider, deeper, and more ornate; there’s a real feeling of transportation, even transcendence. Barbieri’s musical thinking also reaches firmly into the world of Philip Glass and Steve Reich, adapting their phased and additive repetitions to voltage.

On the one hand, the title of this record is ironic; on the other, it’s not. For Venetian Snares, an artist typically associated with breakcore and IDM, making an album with only modular synthesizers, breaking down music into components, and building them up into songs, is in a way an exploration of what is, early in the 21st century, a real tradition. His tradition, that is, with the IDM experiments that came out of the Berlin tradition coming full circle on this album. But how far away are Venetian Snares, Autechre, Squarepusher, and others, from analog sequencers, clock rates, and “snare drums” made from triggered white noise? No farther than a patch cord can reach. And it’s not utopia if you can’t dance.

One of the pioneers of New Age ambient and space music is also a veteran and skillful modular synthesizer musician. Skeleton Keys, from 2015, was the start of what’s been something of a renewal of modular systems in Steve Roach’s music and is a powerful and accomplished album. There is far more activity on here, through patterns and repetitions than on vintage Roach albums like Structures from Silence—very much a Tangerine Dream-style album. But the goal is classic Roach: creating a transcendent experience in the mind and soul and also the body, where his punchy square waves, in his metaphor, act as keys that open up “arcane doors to what waits inside.”

Bridging the aesthetic worlds of past and future, Steve Roach-esque ambiance to Portals-style pattern building, this 2022 release is something like space-station music. Not muzak for living quarters, it’s a sound that establishes silent emptiness, then fits together electronic parts to build something both useful and meaningful out of the infinite emptiness in the universe. Vladimir Sokolović, the artist, explains that he’s thinking of the mysteries of ancient civilizations, and from that foundation he shows how to carve out the possibilities of perfection in place of the void.

Lisa Bella Donna is arguably the finest synthesizer musician in contemporary music. Her technical expertise is such that she’s a clinician for Moog and develops patches for them, but her artistic thinking and skill is even more impressive. Working with modular systems and keyboards, Bella Donna creates beautiful, immersive, long-form, spontaneous compositions using the fundamental tools of sequencing and sound design, along with improvisations, to sculpt shimmering worlds of the possible. Listening to her albums is like watching Doctor Manhattan create his crystal watch-works palace on Mars.

Tangerine Dream
The Sessions I

Although Tangerine Dream founder Edgar Froese passed away in 2015, his band is still going strong more than 50 years after its creation. Currently led by Froese’s successor Thorsten Quaeschning, this 2017 record is rounded out with contributions from Ulrich Schnauss and Hoshiko Yamane. This is one of a series of live recordings, where the group molds spontaneous pieces in real time, ones that are far different than the pulsating eighth- and sixteenth-note styles so prevalent in utopian synthesizer music. The Tangerine Dream way is, well, dream-like: exploring memories and transcendence with waves of sound and timbres that tickle the memory centers, pockets in the mind that contain the sensations of a fat square wave heard on a dance floor, the pulsations of “Love on a Real Train” from Risky Business—the sound of being young. No one has ever made music like this, before or since, and they make the future seem possible.

Bringing it all back to the Berlin School and the space-rock-style of Ash Ra Tempel, this album from the Manikin Records label—for decades a source for the ongoing evolution of all things kosmische—digs into the poppy, joyous sequences of space disco. The basslines and beats come as regularly as a train on the tracks, or a perfectly tuned Mercedes on the Autobahn, and there’s even some guitar to show that disco and funk are also a kind of utopia.