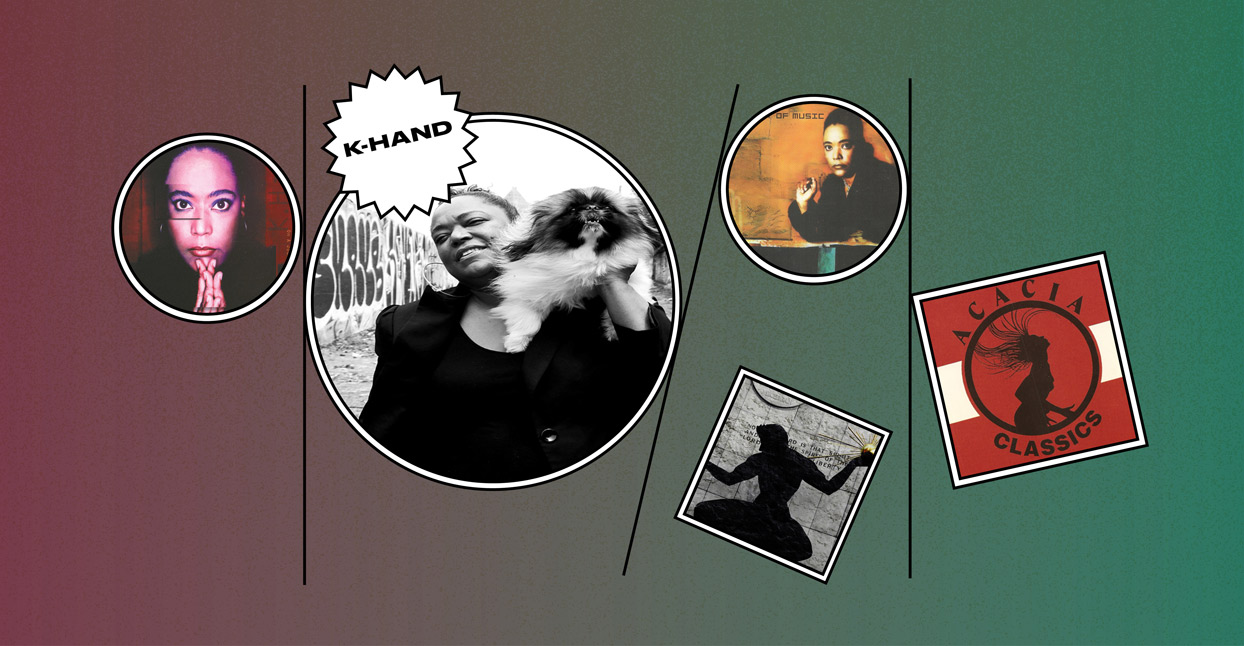 This piece was originally published on August 20, 2019; we are re-running it to honor the memory of K-Hand.

“What mainly got me on my heels was traveling to New York to the Paradise Garage frequently. I found myself with a membership there, and traveled every weekend to catch live acts like Grace Jones, Sylvester, Loleatta Holloway, and, of course, the late Larry Levan,” Kelli Hand explains. The Detroit DJ, producer, and label owner known as K-HAND has been in the music industry for over 20 years, and was an active participant in Detroit techno’s “second wave” in the early ‘90s. She was bitten by the dance music bug early, and jumped headfirst into DJing, building a sizable vinyl collection teaching herself how to mix records. “I went and bought all the records being played [at the Garage] and continued until I had enough to actually spin at home, learning how to mix and DJ. I also frequented clubs in Chicago as well, since it’s the sister city to Detroit. I met Frankie Knuckles on Belmont Rocks and Ron Hardy at his own house parties and clubs.”

Eventually, she began making her own mixes in her bedroom. “I bought used music equipment from pawn shops,” she says. “Back then, pawn shops were loaded with all types of musical equipment, and I started learning the ropes quickly by reading. [I’m] self-taught basically.” Sometime in the late ’80s, those mixes caught the attention of legendary Detroit DJ Ken Collier, who offered Hand a weekly residency at Detroit’s Club Zippers.

By 1990, Hand had begun testing out her own productions in clubs via privately pressed vinyl dubplates. Soon after, she formed her own label, determined to release her music independently. “I started Acacia Records label in 1990,” she says. “It’s named after a street in Detroit.”

K-HAND’s first full-length album, On A Journey, was released in 1995 on the K7! label. Since then, she’s built up a massive catalog that includes more than 70 titles. Touring around the world regularly, as well as pressing and releasing her own music on Acacia, K-HAND quickly secured her place in the pantheon of Detroit techno greats. In 2017, Detroit’s City Council officially recognized her decades of work, honoring her with the title “The First Lady of Detroit.” Here are a few standout selections from her impossibly deep catalog.

An impressive entry in K-HAND’s early catalog, On A Journey, demonstrates her command of multiple stylistic variants in the dance music family tree. She explores fiery acid house on “Starz” and funky Detroit techno on the cut “I Remember When.” Lead single “Numbers” is a minimalist nod to German electronic music pioneers Kraftwerk.

Originally released on the legendary U.K. label Warp, K-HAND’s Global Warning EP showcases the heavy, aggressive side of her music. Boasting dynamic tracks like “Edgewater” and “Acid 101,” the EP’s anchor is the title track, a glorious techno jam centered around a menacing baritone voice that repeats, “This is a global warning.”

A delightful curveball after the dark underground techno sound of K-HAND’s earlier work, Tools Vol. 1 displays Hand’s mastery of soulful, dancefloor-crushing deep house. The EP is packed with beautiful cuts like “My Love” and “Without You,” ripe with deep basslines and lush, echoing vocals.

A wonderful introduction into K-HAND’s broad and expansive musical world. “Everybody” is a pounding collision of house and techno, with its dark, enveloping bass, bitcrushed percussion, and chopped-up vocal sample. “I Can Understand” reintroduces K-HAND’s dark, synth-heavy dance sound, with a minimal, otherworldly vocal refrain. The standout track is “Candlelights,” a smoking, vocal-heavy house track built on a warm low-end and surrounded by heavenly synth chords.

The Art Of Music

An ode to a familiar place, Detroit History Pt. 1 displays K-HAND’s mastery of the full spectrum of Midwestern electronic music styles. “Cpop” is a rolling, peak-time house track with battered piano chords, while “Underground” tackles Chicago-style acid house with clanging percussion and a sharp TB-303 bassline. Detroit History Pt. 1 is a fitting tribute to the city that nurtured her and the musical influences that gave so much to the world.