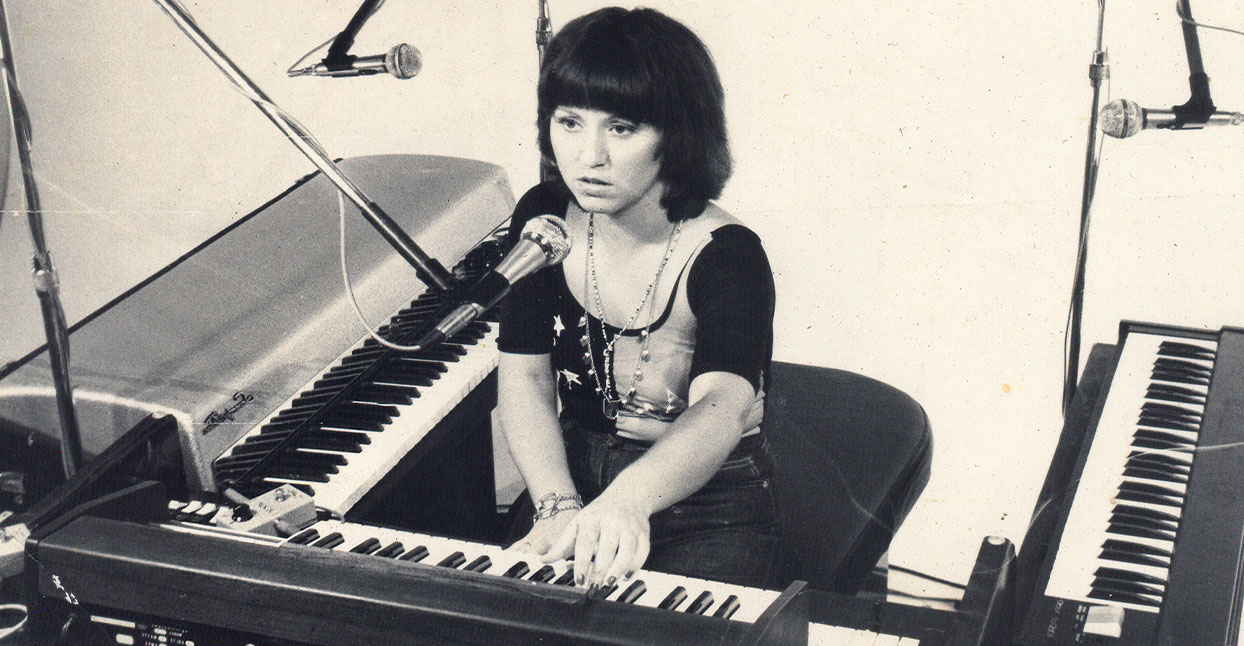 The musical career of Brazilian artist Ana Mazzotti culminated in just two albums: 1974’s Ninguem Vai Me Segurar, and a self-titled release in 1977. In a country that’s famous for the style of samba, jazz, funk, and tropicalia Mazzotti explored on her pair of LPs, her name remains relatively unknown. When they were released, both albums were met with muted reception and, following her untimely death in 1989, were relegated to obscurity. Now, Far Out Recordings have reissued both albums, filling in a blank space in Brazillian music history.

Ana Mazzotti was born in Caixas, in Brazil’s Rio Grande do Sul municipality. Her family encouraged music from an early age: Mazzotti began playing the accordion at age five, before moving to the piano. When she was 12, she began conducting her convent school’s choir and, at 21, she led her city’s premier chorus, the Coral Bento Goncalves.

“As an adult she sang in balls,” says her son, Toni Mazzotti. “She was the only woman to lead bands at that time in the city and region.”

In the ‘60s, the sound of the British Invasion was taking hold around the world, and Brazil was no exception. Mazotti herself fronted both an all-female Beatles cover band and an eight-piece psychedelic group named Desenvolvemento. But her tastes began changing when she met the drummer and producer she would later marry, Romido Santos.

Santos introduced Mazzotti to jazz—artists like Chick Corea and the legendary Brazillian jazz kingpin Hermeto Pascoal. He hailed from Brazil’s northeast and, according to Toni Mazzotti, his mother’s recordings featured a “rhythmic richness that comes from her southern encounter with my northeastern father.”

In 1974, Mazzotti recorded Ninguem Vai Me Segurar. Santos produced and played drums, and the supporting cast was fleshed out by members of Azymuth. At the time, the band were in their infancy, but they would go on to build a discography that defined Brazil’s samba-tinted strain of jazz-funk. Though she was musically literate from an early age, Mazzotti is not credited with any instrumentation on the album. Instead, Azymuth’s keyboardist Jose Roberto Bertrami served as an instrumentalist, arranger, and co-writer on several tracks. Recorded in Estudio Haway around the same time Azymuth cut their self-titled debut album there, it’s natural to consider the two records as accompanying pieces.

Still, this is undeniably Mazzotti’s suite. Ninguem Vai Me Segurar’s smooth grooves, luxurious use of keyboards and electric bass, and sweet samba-soul arrangements on songs such as “Agora Ou Nunca Mais” and “Roda Mundo” are distinctly Brazilian, in line with the work of artists like Sergio Mendes, Ronaldo Mesquita, and João Donato. But there’s an airy quality to Mazzotti’s vocals that sets her set apart. The basement jazz club atmosphere of ballad “De Um Jeito Só” is the perfect example of her delicate touch. English speaking newcomers to her music might want to start with a cover of Roberta Flack’s “I Feel Like Making Love,” which elegantly retains the original’s lightness—it’s as though it would disappear in your hand if you tried to pick it up.

Released independently, Ninguem Vai Me Segurar made little impression in the Brazilian market. But Mazzotti was stubborn. Convinced of the quality of the compositions, she returned to the studio in 1977 to create what is essentially a redux version of her first record. Hoping to cast the work in new light, Mazzotti’s self-titled album took Ninguem Vai Me Segurar, rearranged the running order, re-recorded the vocals, and made some alterations to the arrangements.

“They went back to the studio and remixed the tapes,” explains Joe Davis from Far Out. “She put more on the arrangements—strings, horns—and added some additional music. She always had the tapes. [Ninguem Vai Me Segurar] wasn’t that successful, and she basically wanted to relaunch the album, because the music was so strong.”

Paradoxically, the bolstered arrangements are matched with re-recorded vocals that feel even more intimate than before. The production on “Sou,” for example, brings you a few rows closer to the performance. A new cut “Eta, Samba Bom,” which is peppy and playful, replaces “Feel Like Making Love” in the tracklist.

Still, Ana Mazzotti didn’t bring the commercial success its star hoped for, and both albums soon slid into obscurity, becoming prized rarities for genre collectors. Joe Davis was one of those collectors. As a DJ in the 1990s UK scene alongside people like Gilles Patterson, Davis was regularly spinning both Brazilian and Brazilian-influenced music. It was during a pilgrimage to the country, with the explicit intention of buying records, that he discovered Ana Mazzotti.

“It was always extremely rare, the first album,” he tells me. “I remember I couldn’t find it anywhere. It wasn’t until about 1994, I went to a place called Porto Alegre. She lived there in Porto Alegre, I don’t believe she was from there originally. I found like 25 copies of it. It was pretty nuts. I was like, ‘Wow, what a find’ in all these little book shops and junk shops.”

Mazzotti’s recordings may not have yielded the kind of success she ostensibly hoped for but she still enjoyed a rich career following the release of her self-titled album. She continued to work with Jose Roberto Bertrami, and became a bit of a protege of the great Hermeto. “Later on she studied really hard and became an excellent pianist,” explains Davis.

Though Mazzotti never recorded again, clips of her performing have surfaced online, adding to her small, precious body of work. Mazzotti was only in her mid 30s when cancer took her life, denying her the opportunity to perhaps fully explore her artistry. But we still have Ninguem Vai Me Segurar and Ana Mazzotti, two albums that help define Brazillian samba-jazz. And Toni still clings to some treasured memories.

“I have several memories of these musical moments with my mother. I remember rehearsals where I was allowed to play drums, shows where I slept in the dressing room. I remember living in hotels for a few months, where my parents were touring. I remember her strength and leadership both at home and on stage.”