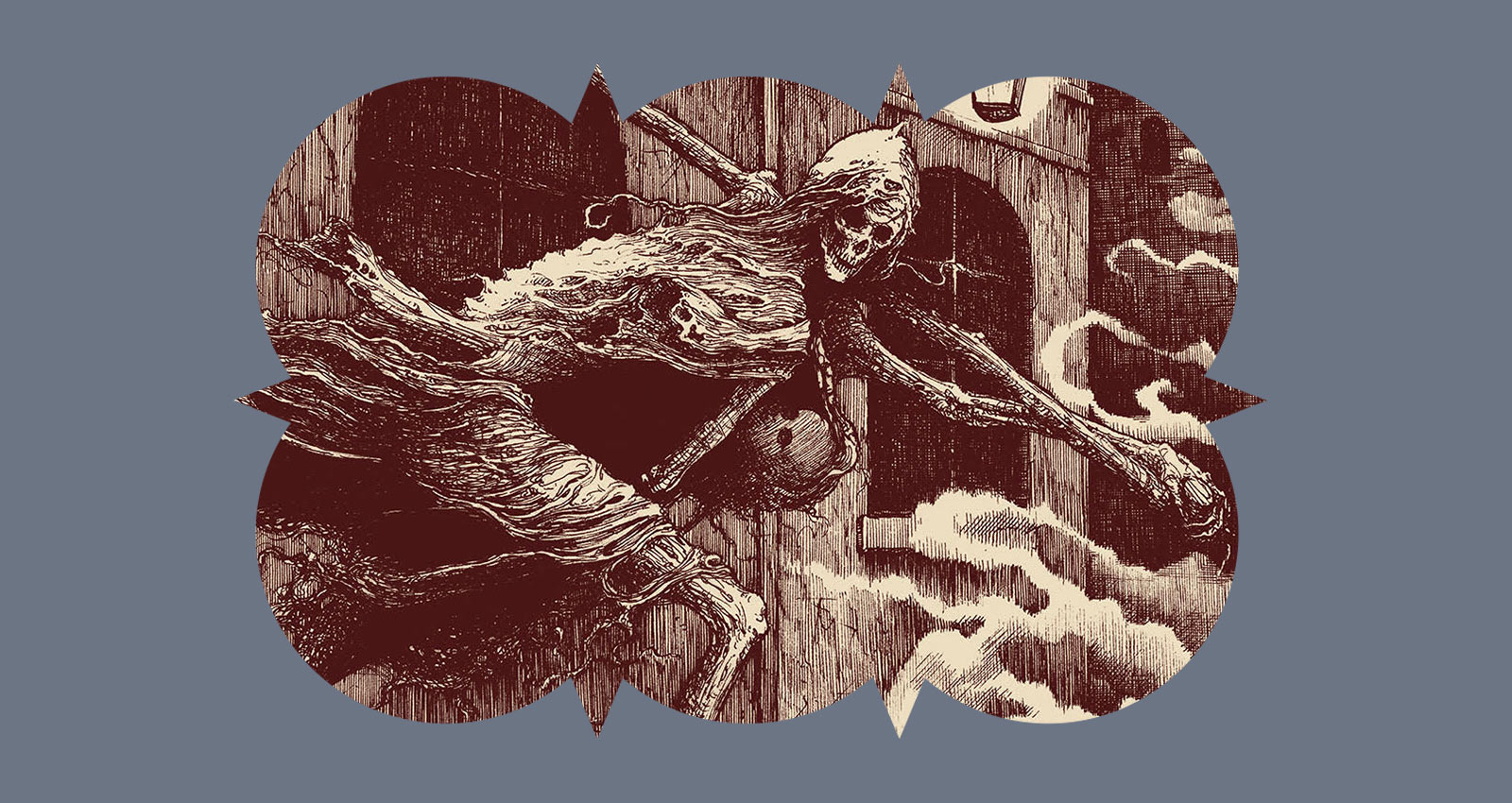 The final regular metal column of 2022 includes a pair of black metal acts integrating melody in fascinating ways, plus furious thrash played by Swedish teens, glammed-up speed metal from Japan, and much more.

Nansarunai
Ruins of the Moonlight Temple

It’s been nearly two years since the Indonesian raw black metal project Nansarunai debuted with the stunning Ultimul Rege. They’ve spent the intervening time honing their chops on a series of splits, and sophomore LP Ruins of the Moonlight Temple bears the fruit of those labors. It’s every bit as raw and vicious as Ultimul Rege, but its attention to arrangements and rich melodic sophistication elevates it to another level. Nansarunai learned to stretch their songs to epic lengths on their split releases, and they apply that knowledge to a pair of towering highlights on Moonlight Temple: “The Eminent Protector of the Land” and “A Floating Melodious Hymn Praising the King.” These songs are, by turns, bellicose and melancholic, a balancing act that has become Nansarunai’s signature. Elsewhere on the album, they let flaming arrows of lead guitar pierce the hazy production. “The Ruler and the Realm” might be their catchiest song yet, and its latter half is dominated by an ascending guitar line, clarion-clear amidst the din of blasting drums and tape warble. The most impressive song on the record is a cover. “Citra Hitam” was originally recorded by the Indonesian pop singer Chrisye for his 1978 album Sabda Alam. In Nansarunai’s hands, it becomes a masterpiece of moody atmospherics and searing howls. The kind of outside-the-box ambition that leads to a black metal version of a schmaltzy Indo-pop tune typifies Nansarunai’s brilliance. Ruins of the Moonlight Temple is a triumph.

Spider God
Fly in the Trap

Spider God made a splash earlier this year with the release of Black Renditions, a collection of faithful black metal covers of pop hits by artists like Britney Spears and the Backstreet Boys. Black Renditions wasn’t meant as a goof; project leader G. is obsessed with pushing the melodic limits of black metal. Fly in the Trap, his first full-length of original music, applies the same logic that led to a black metal version of “I Wanna Dance With Somebody” to a suite of songs about the mysterious 2013 death of Chinese-Canadian student Elisa Lam. Lam’s story is a sad, strange one that offers few definitive answers, and G.’s perspective-swapping retelling successfully avoids falling into exploitative true-crime cliché. (The album’s narrative frequently feels like it’s in conversation with John Darnielle’s brilliant novel Devil House.) Musically, Fly in the Trap is experimental in the truest sense of the word. It feels a bit like gathering the ingredients for vegetable soup and somehow baking a cake. G. tremolo-picks his guitar parts, pounds out blastbeats on his drums, and delivers his vocals in a throat-shredding shriek. The result sounds like black metal because the trained ear recognizes those components as the basis of black metal. It also doesn’t sound like black metal at all, as G. plays most of his riffs in bright major keys and arranges them into pop structures. The contrast is thrilling, and a bit unsettling. In a genre too often marred by proficient orthodoxy, Spider God is doing something legitimately new.

I love everything about Sarcator, the Swedish thrash band led by vocalist and guitarist Mateo Tervonen. I love that their band name, much like their sound, is a compound of “Sarcófago” and “Kreator.” I love that Tervonen learned the guitar by jamming with his dad, The Crown’s Marko Tervonen, and I love that he was only 13 (!) when Sarcator recorded their first EP in 2019. Now a grizzled 17, Tervonen has delivered a contender for the best thrash album of the year with Alkahest. Sarcator have always been almost shockingly tight, and a lot of Alkahest’s power comes from its precision. Every component of songs like “Perdition’s Hand” and “Grave Maggot Future” clicks satisfyingly into place. They just sound right. With his fundamentals so thoroughly in order, Tervonen has also learned how to construct longer, more complex songs. “Dreameater,” “He Who Comes from the Dark,” and the nearly 10-minute closing title track call to mind the mighty Metallica, who came into the fullness of their powers when they went epic on Master of Puppets. That’s high praise, but Sarcator are worthy of it.

Japan’s history of flamboyant, melodic heavy metal dates to the early ’80s, when bands like Loudness and Anthem first brought a joyous panache their Judas Priest worship. Subsequent generations of bands have taken up their mantle, and Tokyo’s Risingfall are among the best doing it today. Their first full-length Rise or Fall borrows from their Japanese forbears, plus Hanoi Rocks, Dokken, Riot, Toyo Blade, and Helloween, to forge a sound that’s equal parts glam rock and speed metal. (L.A.’s Saber are their closest modern peers.) Principally a collaboration between guitarist and Takashi Kono and vocalist George Naruki Ito (also of Significant Point and Military Shadow), Risingfall excel whether settling into a midtempo stomp (“Rock Fantasy”) or blitzing ahead at warp speed (“English Motor Biker”). A second guitarist, Yoshiki, plays on the album, dueling with Kono in solo sections and harmonizing with him for some Iron Maiden-style twin leads. Sadly, Yoshiki passed away shortly after the recording of Rise or Fall. Risingfall carries on in his memory.

The Tennessee-based artist Ryan Clackner has dedicated his life over the past several years to finding the commonalities between black metal and the musical traditions of the American South. Through projects like Vile Haint, Crestfallen Dusk, and StumpTail, as well as his curation of the Moonlight Cypress Archetypes imprint, Clackner has posited that black metal is a cousin of early jazz, Delta blues, country music, and more. His latest band, SkyThala, turns its gaze away from his home and trains it eastward. Boreal Despair is an orchestral black metal album inspired by the composer Igor Stravinsky, particularly his early Russian period, shortly after the turn of the 20th century. Also known as his “primitive period,” those years saw Stravinsky tapping into a raw and instinctual style that finds a natural kinship in black metal. Clackner and his collaborators draw that affinity out brilliantly. Many of Stravinsky’s works from his Russian period – including the riot-inciting The Rite of Spring – were considered anti-symphonic in form, and SkyThala echo that with their densely stacked, off-kilter, claustrophobic compositions. Songs like “Eternal Nuclear Dawn” and “Rotted Wooden Castles” shatter the dichotomy of beauty and ugliness in music. Out of their jarring strangeness, a new idea of grace emerges.

As the retching, gurgling leader of Copenhagen’s Undergang, Martin Leth Anderson has made some of the most disgusting death metal of the past decade. He sounds like a completely different person in Strychnos, a blackened death metal band whose long-awaited debut album, A Mother’s Curse, sits more firmly in the Dark Descent house style. Anderson started the band back in 1998, but it’s taken nearly 25 years for A Mother’s Curse to come together. Indeed, the songs feel labored over, their churning riffs and pounding drums ratcheted up to a suffocating degree. There’s an evil, oppressive atmosphere to the whole affair, one that feels of a piece with Incantation’s cavernous death worship. It’s another coup for Anderson, who was already one of the all-time greats of Danish death metal.

When Justin DeTore and Derrick Vella joined forces as Dream Unending for last year’s Tide Turns Eternal, their take on death/doom had already begun to bleed beyond the borders of that sound. They’d dubbed the style “dream doom,” a fake genre that nonetheless described the band perfectly. Song of Salvation follows closely behind Tide, and it expands the Dream Unending sonic universe even further. Vella’s soaring guitar work already echoed David Gilmour; now he’s brought in influence from Low, King’s X, and the Blue Nile. (His father David Vella plays the lush keys that help those Blue Nile-isms really come through.) DeTore anchors the album with his steady drumming, but as a vocalist, he generously shares center stage with a series of guests who help flesh out the record. Appearances by ex-Sumerlands frontman Phil Swanson, synthpop singer McKenna Rae, and voice actor Richard Poe help create the feeling that Song of Salvation isn’t just a doom metal album, but an entire world—one you may want to live in forever.

In the Woods…
Diversum

Norway’s In the Woods… began as a black metal offshoot of Green Carnation, though their folk-inflected 1995 breakthrough HEart of the Ages didn’t sound much like the rest of the black metal emerging from the country at the time. Much like Green Carnation, they’ve spent the years since evolving into a kind of proggy gothic rock band. Diversum is the band’s sixth album (and first with singer Bernt Fjellestad), and it sits solidly in that milieu. It’s dark, melodic, and moody—all qualities it shares with late-era Katatonia, perhaps its closest reference point. There’s not much black metal left in the In the Woods… sound, but they’ve aged so gracefully into their new identity that it’s hard to care.