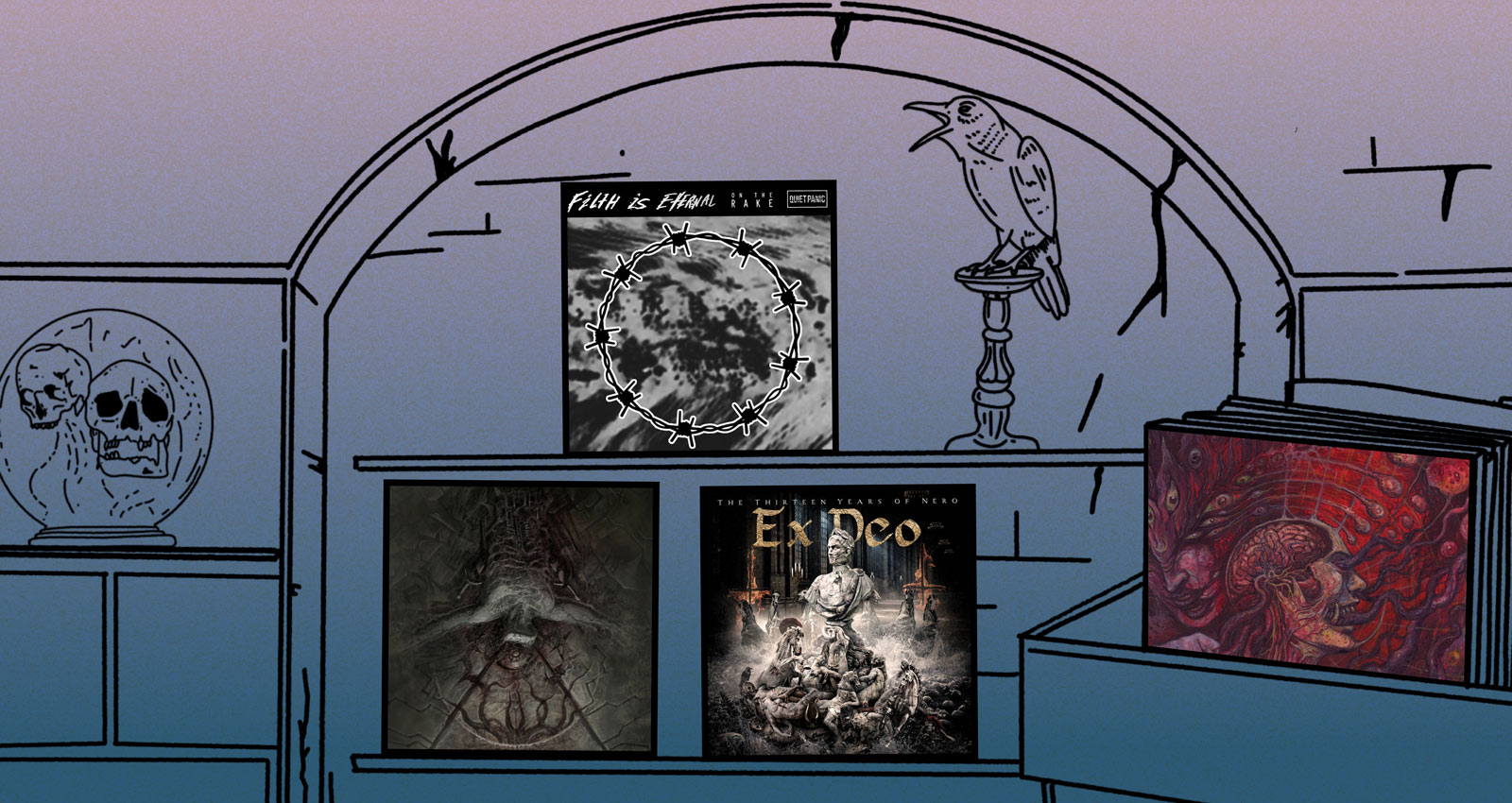 August’s batch of the best metal albums on Bandcamp is heavy on the death metal and black metal, but the artists behind them take those sounds in wildly different directions.

Every summer, it feels like some new death metal project comes out of nowhere and drops the season’s defining hot weather ripper. This year, that honor goes to Alchemy of Flesh, whose debut album Ageless Abominations is a blast furnace of old school death metal madness. Tim Rowland’s solo project consciously sets itself in the lineage of the early ’90s Florida scene, citing Morbid Angel as its primary influence. That means guitars that crunch rather than buzz, vocals with distinctly pronounced syllables, and songs whose main intent is to be heavy, not necessarily thick with atmosphere. It all works spectacularly. Per this column’s long-standing policy, we recommend drinking a beer and eating something grilled during the 39 minutes it takes to listen to Ageless Abominations.

On last year’s Ghanima, Luca Cimarusti ran black metal through a filter of his own sensibilities, incorporating elements of noise rock, shoegaze, and minimal synth into its brutalist palette. Follow a Song from the Sky is Cimarusti’s second full-length as Annihilus, and it’s a sleeker, more sophisticated expression of his vision. That’s not to say there’s not still plenty of sonic ugliness. The songs are still bathed in enough reverb and feedback to drown in. They’ve just been tightened so their emotional truth hits you just as hard as their physical thwack. Song also feels like a bigger record than Ghanima, thanks in part to the who’s who of Chicago legends that round out the contributors list. Dan Binaei (Racetraitor), Trevor Shelley de Brauw (Pelican), Ryan Wichmann (Sick/Tired), and experimental composer Brett Naucke lend a wide variety of new sounds to the Annihilus universe. With their help, Cimarusti has once again made one of the finest black metal albums of the year.

Nunslaughter
Red Is the Color of Ripping Death

You could be forgiven for dipping in and out of the Nunslaughter experience. The band has released somewhere in the neighborhood of 200 records dating back to their formation in 1987. They’ve only made five full-length albums, though, so each one is a rare event worth tuning in for. Red Is the Color of Ripping Death is the Cleveland miscreants’s first long-player since 2014’s Angelic Dread, and it’s still a thrill to hear them thrashing about in (relatively) long-form. Frontman Don of the Dead made the difficult decision to carry on with the band when longtime drummer Jim Sadist died suddenly in 2015, and this is the first LP to include another person behind the kit. Joe Lowrie is more than up to the task, his groove-driven style a perfect foil to Don’s primordial songs of satanism and perversion. Musically, Nunslaughter still lives in the mid-’80s moment when black metal, death metal, and thrash were indistinguishable and intertwined. If you’re looking for something unapologetically old school, look no further.

Our Place of Worship Is Silence
Disavowed, and Left Hopeless

Take the hellish atmosphere of Incantation and infuse it with the raw energy of hardcore, and you’d end up with something like Our Place of Worship Is Silence. On Disavowed, and Left Hopeless, the band carves a lightless pit and then traps us in there with them. It’s a suffocating, claustrophobic listen, an effect enhanced by the fact that there’s just two people in the band. There’s an immediacy to the interplay between guitar and drums here that’s deeply refreshing. Tim and Eric—their actual names, but also a hilarious choice of stage names for dudes making music this terrifying—work off one another’s riffs and solos the way a jazz saxophonist and drummer might. That’s not something you can say about much death metal, but perhaps it should be.

There are a couple of song titles on Iam Vampire Castle that I’m shocked Old Nick hasn’t used already. How have they not already put a song called “Vampyric Witch Ghost” or “Sad Vampire” on one of the 16 releases they’ve released in the last year? By now, the Old Nick aesthetic is so dialed in that if you’ve heard any of their records, you know what to expect. Still, there are some new wrinkles here that make Iam Vampire Castle one of the best entries in the band’s discography. On the title track, the opera singer Alejandro Luévanos contributes vocals that sound like they’re being piped in from a crackly 78. Asmita Vijay Virkar plays the disintegrating melody of “Ceaseless Spiral Staircase” on a sitar—a George Harrison in corpse paint. It’s another triumph for frontman Abysmal Specter and his merry troupe of sad vampires.

Filth Is Eternal doesn’t waste a second. The Seattle hardcore band rips through 12 songs in 20 minutes on their sorta-debut LP, Love Is a Lie, Filth Is Eternal. (A previous album, Suffrage, was released under the name Fucked and Bound.) As concise as they are at getting their point across, Filth Is Eternal find time to bring in a wide range of sounds. I can hear punishing D-beat, amorphous sludge metal, noise rock skronk, even the proggy hardcore of bands like Refused and Fucked Up. The star of the show is Lisa Mungo, whose chameleonic voice leads the rest of the band into battle. She can sound sneering and sarcastic, as she does on album highlight “Wigsplitter,” or downright terrifying, like on “The Ritual.” Pre-pandemic, Mungo’s unhinged live performances fronting Fucked and Bound were already on their way to making her a legend. With luck, she’ll get to pick up where she left off soon.

If you’ve ever listened to an unnervingly dissonant Portal song and thought “I wish this was 24 minutes long,” the debut album by Qrixkuor is for you. Poison Palinopsia consists of just two compositions, “Serpentine Susurrus – Mother’s Abomination” and “Recrudescent Malevolence – Mother’s Illumination.” As each song stretches toward its 24-minute terminus, it uncovers labyrinths within labyrinths, moving fractally rather than on a linear path. There’s a twisted internal logic to what the band is doing here that resembles At the Mountains of Madness or House of Leaves more than it does most death metal. As the song becomes less comprehensible, the terror compounds. It’s the most effective musical nightmare of the year.

Maurizio Iacono launched the Ancient Rome-themed symphonic death metal project Ex Deo in 2009 as an offshoot of his primary band, Kataklysm. What may have looked like a one-off to fans at the time has evolved into a steady sideline to the singer’s main gig—one that also includes two of his Kataklysm bandmates, guitarists Stéphane Barbe and Jean-François Dagenais. Ex Deo’s fifth album, The Thirteen Years of Nero, is their best yet. Lyrically, it’s a concept album retelling the rise and fall of the infamous emperor, one that thrillingly blurs the line between history and legend. Iacono truly becomes Nero on the songs where he sings from his perspective, and his obvious passion for the subject matter is matched by the album’s richly rendered orchestral arrangements, composed by Clemens Wijers of Carach Angren. As one might expect, the album is pitched at an operatic scale, but if you can lose yourself in the bombast, it’s a deeply rewarding listen.