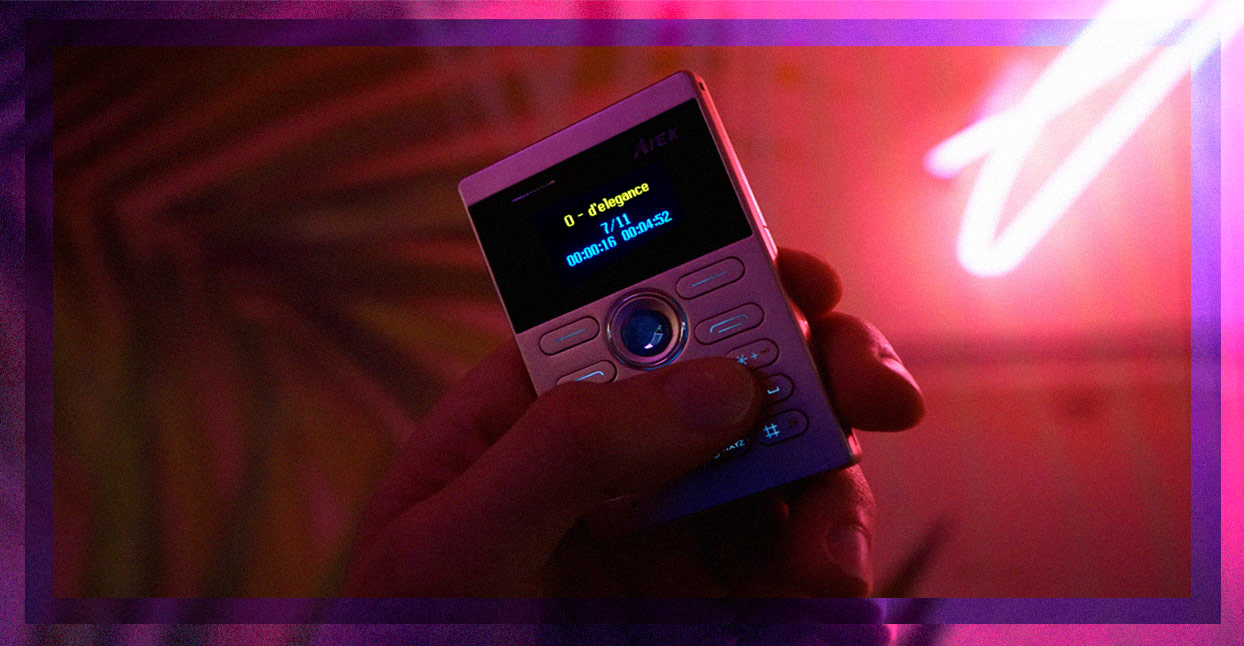 Toronto vaporwave and electronic label Tiger Blood Tapes are no strangers to creative merch. A quick gander at the merch section of their Bandcamp page reveals some surprising items tucked in amongst the colorful cassettes and die-cut logo stickers, including (but not limited to) homemade hot sauce in both mild and extra-hot varieties.

“We were growing hot chillies in our backyard every summer and making hot sauce from them,” explains label head Chris Hintzen. “The feedback from friends and family was always ‘You should sell this,’ so we figured we’d give it a go. A friend suggested calling it ‘Tiger Blood,’ as it complements the record label’s hot-blooded branding.”

Recently, Tiger Blood Tapes put up an item that truly pushes the boundaries of inventive merch ideas even on Bandcamp, where it’s possible to put records on everything from USB drives to floppy disks to Sega cartridges. The item? A copy of Geo Metro’s SCIVIAS available on a palm-sized burner-card cell phone of the kind you might not be too familiar with unless you’ve spent some time in the U.S. military (more on that below). Limited to an edition of 25 and billed as “a piece of digital music history,” each phone comes preloaded with a copy of the album, some unreleased tracks, and the artist’s phone number—the easier for fans to share their thoughts on the album (or anything) with Geo Metro (real name Andrew Salyer), at the touch of rather outdated-looking button.

We had to know more about the background on this seriously out there piece of merch, so we shot an email over to Hintzen who in turn passed our questions along to Salyer. As it turns out, the story behind the burner-card cell phones is charming, personal, and a little bit philosophical.

Where did the idea for a burner-card cell phone as music merch come about?

The idea for the burner phones came from two sources. First, there was the idea of building on what we accomplished with the release of my last album, Ravage2099, where we gave away a fully functional and customized iMac G3 (hand-canvassed in fur by visual artist Sarah Mikolowsky and internally curated/mechanically restored by myself) that was used in the making of the the record. Making music can feel sometimes like you’re screaming into a void, so the knowledge that someone would be forced to interact with my work in such an intimate way due to the presence of this big, heavy objet d’art somewhere in their home was satisfying in a way that little else has been. I wanted a similar gimmick for the release of SCIVIAS. At the time, I was moving to a new apartment and in the process, I stumbled upon a junk drawer full of all of the old burner phones I collected during my different deployments in the Navy (shoutout to the Antietam, Cowpens, and Task Group Trident crews) and immediately knew that this was exactly the sort of thing that I had been looking for.

Why did a burner-card cell make sense for your music in particular?

The burners have a set of personal memories tied to their ownership and use; the ritual of my group of friends trading numbers after pulling into port in order to better coordinate drinking Singapore dry will be forever etched in my memory. The association of any disposable, forgettable piece of technology will always be spiritually associated with my music, at least to me. A lot of the source material for my sound design comes from obsolete technologies, mainly FMV games and VSTs designed for PowerPC which can be had freely nowadays as long as you’re willing to slog through the trash UI of the majority of the era’s software. This has resulted in the physical space I record in being cluttered with the old hardware necessary to make everything work and which, being as cheap as it is now, has quickly grown into something very much like a hoarder stash when combined with the drawers of burner phones and adapter cables I’d already built up in my life to that point. All of this ends up being expressed as part of the music created in some form or another, be it a song (“Well Tempered” from SCIVIAS is composed mainly of OS 9 UI sounds) or a video (the video for “Carbon Cathedral” from the same album was made out of some Blender flythroughs on an old Thinkpad) or, you know, an album on a burner phone.

How did you get the materials and how long did it take to put it together?

I checked the manufacturer of each of the burners I picked up overseas and began to scour eBay, AliExpress, and everywhere else I could think of for matches. After finding a match for one of the models, I placed an order through a shady eBay reseller and, a few weeks later, had a beat-up package from China waiting on my doorstep containing the phones along with some additional SD cards. The process of actually loading the music onto the phones was a pretty simple one, but the reality of editing metadata and contacts entries via T9 typing was a bit more tedious than I’d anticipated.

Did you have to troubleshoot the phone before putting it up for sale? Anything crazy or unexpected happen?

Absolutely. When the phones arrived, only about half of them wanted to recognize that they even had an SD card installed, and others had issues with even powering on (questionable soldering practices were employed in their manufacture, to put things lightly). Thankfully none of the ones sent out so far have had any problems, but I’ve got a candle lit at the cathedral to ward off any chance of exploding batteries—just in case.

The phone comes preloaded with your phone number for people to call. Has anyone done that? What did they say?

I did recently receive my first call! It was right before a performance I gave for a party we do here in Philly called Terminally Chill, and it ended up creating exactly the situation I had been hoping for: in the normally hectic environment of a club, I had an excuse to sneak away for a smoke and have a conversation with somebody I’ve never met before who was experiencing my work for the first time. For a few minutes, it was as if nobody else was there and all that existed was a happy chat between artist and audience.