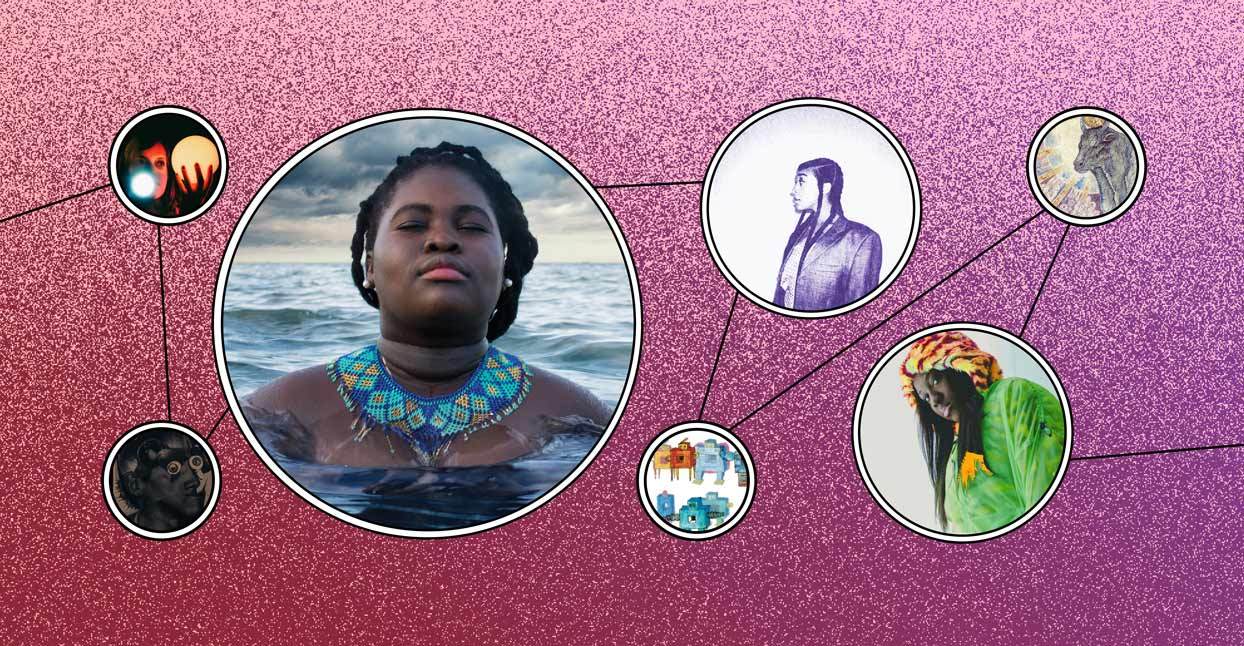 Bull of Apis Bull of Bronze
Offerings of Flesh and Gold

Deep in the description for their latest album, Offerings of Flesh and Gold, the Colorado black-metal band Bull of Apis Bull of Bronze make a following, apt observation about the scene at large, and their place within it: “Black metal is about power. That fire in your belly can be harnessed. It can be pointed in a direction that moves us forward. That is what we hope to accomplish.” While they’re a black-metal band through and through on the sonics side, BoABoB (how’s that for an acronym?) aren’t ones for bellowing about spooky skeletons, virgin sacrifices, or eternal damnation, unlike the vast majority of their peers on Encyclopedia Metallum — LARPing while Rome burns is kind of a luxury, after all. Instead, these three, humongous songs songs amplify the horrors in our own backyard: workers struggling to make ends meet, single mothers working multiple jobs with no healthcare, farmers losing their subsidies to big business, people of color walking down the street not knowing if they’ll be stopped by the police, or worse. A caustic call to action that you can headbang along to in the circle pit? And NOW it’s available on cassette? Gimme!

Sonocardiogram, the latest album by Daymé Arocena, is a vibrant masterpiece. The Cuban artist returned to Havana to record and produce this album that pulls from traditional Afo-Cuban and Latin jazz musical traditions. Album opener “Nangareo,” features the sounds of ocean waves underneath Arocena’s steady speaking voice and is the perfect conduit to a suite of songs that pay homage to Santeria/Yoruba Orishas. The songs, “Oyá,” “Oshun,” and “Yemayá,” are each devoted to respective Orishas and feature the traditional batá drum. Paying homage is a constant theme of Sonocardiogram. Arocena’s ode to the legendary La Lupe, “Plegaria a La Lupe,” features a vivid jazz piano solo between her soft singing, and does in fact, sound like the prayer its title hints to. On Sonocardiogram, Arocena takes the listener on a journey to her home and gives an inside look at the influences that have shaped her sound.

UK singer Lynda Dawn’s first exposure to music came through multiple sources—the sound of the afrobeat and highlife records her parents would play around the house; the gospel and funk she heard during worship services as a child attending a Penetcostal church. But her latest EP reflects another inspiration entirely: the electro-funk sound of the early ‘80s. She’s not alone—the sound is on the ascent lately. But over the course of At First Light’s brief, 19-minute runtime, she effortlessly establishes herself as one of the resurgent genre’s leading lights. The trick is in the way she sings: on First Light, Dawn’s voice is more subtle texture than commanding lead, which pairs beautifully with the gurgling synths and artificial handclaps that surround it. “Fonk Street” is a study in glorious restraint: Dawn’s voice, layered in what sounds like three distinct strands, stretches out gently, like pulled cotton candy, as the instrumentation pops off calliope-like around her. “Arise” is another gem: Dawn’s voice traces a soft gospel melody line through sturdy slap-bass and short bursts of chicken-scratch guitar. And “Theme for Cha Cha” flirts with boogaloo, its twitching rhythms calmed only by the softness of Dawn’s voice. All of the songs are draped in synthesizers, like twinkling lights on a Christmas tree, and the net effect of the whole EP is both sparkling and soothing.

The central premise of Zdenka 2080, the awesome new album from Bay Area electronic musician Salami Rose Joe Louis (aka Lindsay Olsen) is a cruel joke in the most cosmic sense imaginable; A slew of one-percenters board a fancy, solar-powered spaceship and sail off in search of a new home, only to discover that the sun is dying and that soon, they will be too. (You’d have thought the engineers would’ve taken that into consideration beforehand, but you know, late-capitalistic hubris is a bitch.) The story only grows weirder and more dreamlike from there, with our protagonist encounters trans-dimensional paintings, bizarre “earth creatures” with literal rooms for brains, and no fewer than seven separate dimensions. Even as the intergalactic insanity unfolding at a fast clip, Salami’s warm, wispy astral-projecting art-pop never once loses the plot, as attested to by tracks like “Cyanotype of Blue” and “Sitting With Thoughts.”

For roughly the last for years, the Durban, South Africa label Gqom Oh! has been tirelessly documenting the city’s thriving dance and electronic music scene. The primary sound—also called gqom, and is the source of the label’s name—scans as about 25 different things at once. With its thumping, alternating long and short rhythms, it at times feels like a distant cousin of baile funk. But there are other elements that betray that shorthand—the grimy, often dark synth stabs that feel like something that would turn up on the PAN label, the occasional euphoric vocals not too far removed from Chicago house. The main thing the defines the tracks on their latest compilation Commando—named for the label’s official dancer, and the perfect introduction to their sound—is its persistent drive. All of the songs feel determined, the beat occasionally alternating cadence, but always pushing insistently forward. The shading appears in the musical elements: the upper end of Citizen Boy’s “Dark Island” is occupied by weird, bird-like whoops and an eerie, six-note wheezing synth melody that sounds like a haunted accordion playing during the world’s creepiest seance. Griffit Vigo & Ree’s “Gqom Planet” feels like it reaches back in time to the region’s earliest music, with a beat built from synthetic handclaps and a synth line that spirals dizzily, like the guitars in a highlife song. “ACE” by Emo Kid is anything but emo—its triumphant synth lines feel like synthwave on uppers, streaking furiously over a rowdy, hectic rhythm line. It’s another vital showcase of a scene that continues its dominance.

The Nurse With Wound list was born the same year that I was, 1979. Included with the pioneering experimental/industrial group’s debut album, Chance Meeting on a Dissecting Table of a Sewing Machine and an Umbrella (and expanded on its follow-up the next year) was a list of artists—minimalist composers, jazz luminaries, groundbreakers on the edge of pop, Krautrock groups, psych and prog-rock bands, punks, fellow industrial explorers, and on and on. Qualified only with the line “Categories strain, crack, and sometimes break, under their burden—step out of the space provided,” this list became a road map for any curious listeners seeking to explore the avant-garde of the ‘60s and ‘70s—an un-canon, if you will, an expansive and challenging head trip. I first came across it in the mid-’90s, sure I would never be able to find or afford records by many of the artists on the list. In the early ‘00s, dedicated bloggers began to assemble the puzzle. Now, there are playlists across the streaming ecosystem.

Finders Keepers is a label with a similar ethos to the list itself—open-minded, and less interested in record collecting as an economic sport than in finding the unheard, the unexplainable, the boundary-pushing. It makes perfect sense as a home for a compilation based on the list, assembled by Nurse With Wound’s Steven Stapleton; this first volume is all about the French. Opening with jazz drummer Jacques Thollot’s unsettling “Cécile,” which has the eerie piano line of a horror soundtrack and in which even swinging rhythms are punctured by percussive accents or a line that sounds like an entire keyboard being pushed down the stairs, it is still thrilling listening for someone like myself who has spent decades in the crates with some of these artists and as eye-opening as the list ever was for those who have never really dove in. From prog group Lard Free’s dissonant, dark-edged explorations to avant-garde composer Igor Wakhévitch’s carefully orchestrated and electro-bent take on 20th century composition, from Z.N.R.’s lilting folk-jazz to Catherine Brenot’s space-disco, there’s great diversity in approach, background, and sound; what struck me most this time around was how much playfulness, how much charm, there is in so many of these works. In a time when even the unknowable void has a playlist and so much seems cordoned off and predetermined, the adventurousness of these artists—like the list’s initial intent—is a reminder of possibilities, of the power of weird art to move weird people. To call it essential seems a crime; call it life-affirming instead.

The Mary Timony Band
The Shapes We Make

Mary Timony’s solo records started out in darkly personal and musically difficult realms, but she mostly had broken free of those tendencies by 2007’s The Shapes We Make, her final (ignored) solo album before she took a long hiatus from making music. Billed as being made by The Mary Timony Band, The Shapes We Make starts out with the exuberant “Sharpshooter,” a big shiny rock song that sounds like a shimmering rainbow, folding in a dis for Ted Nugent that’s sadly still relevant. But this is still a prog record in the classic “flutes and fairies” sense: listen to the mathy progressions of “Rockman” or “Summer’s Fawn,” not to mention the swirling psychedelic outro of feminist anthem “Pause Off,” both majestic and metallic in equal measure. This is also the last record to feature Timony’s piano compositions, and the lovely, weepy “Window” contains some of the simplest, saddest lyrics of her career. Though still somewhat gloomy, throughout The Shapes We Make there is the nascent spark of joy that would eventually characterize Timony’s current project Ex Hex (speaking of which, have you heard their new Slant 6 cover?) If you like that, you’ll love this.