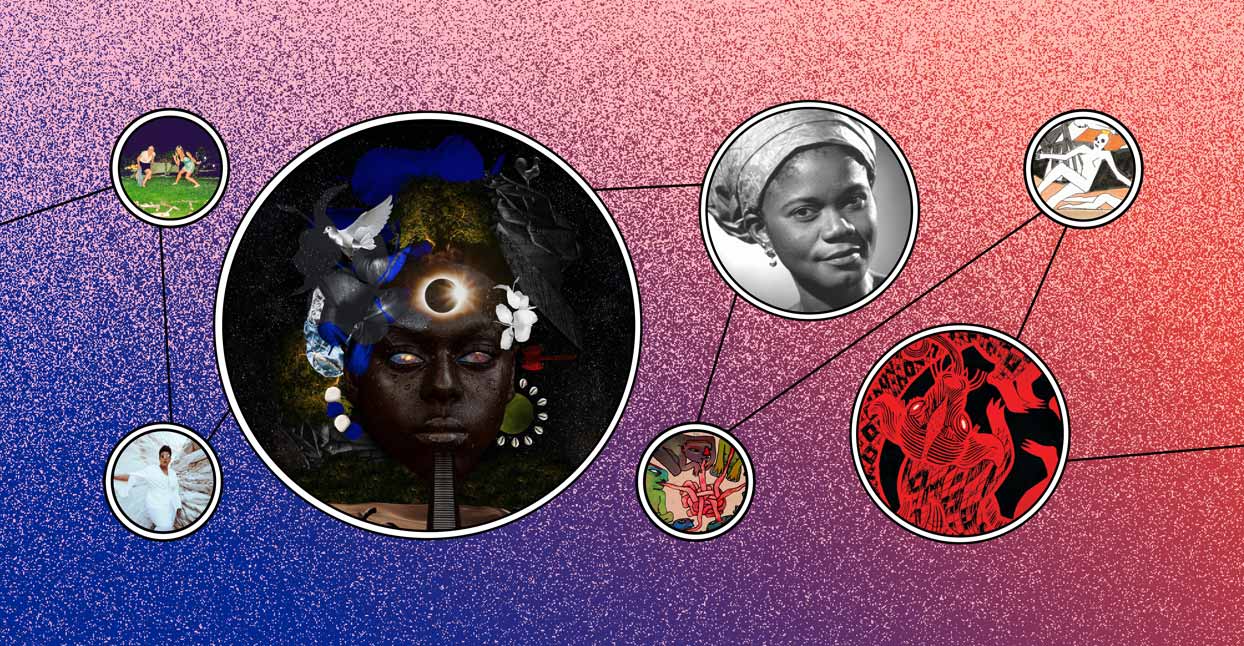 Afrosideral is the work of Kumar Sublevao Beat, a Cuban producer also known as Dasari Kumar Mora. Sublevao has been releasing music under various guises for the better part of the last 20 years: In the early ‘00s, he went simply by “Kumar,” and released an EP of Afro-Cuban hip-hop through Universal Music. More recently, he was a member of the audio-visual project Afrikun, which was thematically centered around the history of the tribes of Africa. The connective fiber between all of these projects is Sublevao’s desire to pay tribute to various regional musics by reframing them in contemporary context. That theme continues on El Olimpo de los Orishas, which combines the rhythms of Afro-Cuban music with wavy electronic psychedelia and the distinct, rigid drumming style of the Yoruba people. Considering that parentage, it’s hardly surprising that the music on El Olimpo is heavily percussive: deep, steady, bass-y rhythms form the rock-solid foundation of songs like “Filho do Mar” and “Ode Ni Ire,” which Sublevao fleshes out with hallucinogenic keys (“Oggun Onile”), giddy marimba and near-drunk horn charts (“Líbrame de Arayé”) bird calls, distorted mbira, and wah-wah guitar (“Osain Maribo”). If you’ve been following the recent output of the excellent New York label Wonderwheel, who are releasing El Olimpo de los Orishas, all of that tracks. What adds an extra sense of riotousness to the proceedings are the vocals: all group-sung, all call-and-response, all feeling like they were recorded in some house-party-slash-ceremonial-ritual on the other side of the world. Combined with Sublevao’s frequent, dizzying use of echo, the songs on El Olimpo de los Orishas are surreal and celebratory all at once.

Nothing much happens on Chastity Belt. Nothing much ever did happen on Chastity Belt records, which have always been plain-faced in their expressions of pain and ennui, even when the band couched them in jangle and jokes that weren’t actually jokes. But there are no claims to greater meaning on Chastity Belt, no aspirations to anything more than just feeling okay in the company of friends. “Believe me/ This is the way I am,” sings Julia Shapiro on “Drown,” a song about the slow decay of disassociation from a songwriter who’s been flirting with the romance of disappearance their entire career. Yet the gentle ambience of the rock band that surrounds her suggests that salvation can be found in the people who love you, if it can be found at all.

The Los Angeles musician Alfred Darlington, aka Daedelus, is primarily known for two things: dressing like a Victorian dandy, and exploring centuries-old injustices by way of unsettling, ephemeral dronescapes. His new album, The Bittereinders, marks the final installment of his long-running “End of Empire” album trilogy for Brainfeeder, which began with 2010’s The Righteous Fists of Harmony, centered around the Boxer Rebellion of 1899-1901; and continued with 2014’s The Light Brigade, his reckoning with the Crimean War of 1853-56. With this release, Darlington sets out to illuminate the ravages of the Second Boer War, a turn-of-the-century imperial conflict in South Africa defined by state-sanctioned massacres and guerrilla warfare, which coined the concept of the “concentration camp” as we know it today. His tribute to the fallen contains no discernible words — after all, what good is rational language in the face of such senseless suffering? — but speaks existential multitudes nonetheless; the miasma of skittering percussion, gothic organ, blurry radio static, and cauterized string samples consuming standouts like “Trifling” and “Veldt” are the sounds of Darlington stripping neoclassical traditions of all order and prestige, and burying each one alive individually, one handful of dirt at a time. It’s not quite the same as justice, but it’s a start.

Nahawa Doumbia is a legendary and prolific Malian singer. Her 1981 debut album, La Grande Cantatrice Malienne Vol 1, is a good survey of her vocal prowess. Recently reissued, listeners are treated to the early days of Doumbia’s career which predates her current use of bass and percussion. Featuring didadi, a traditional dance rhythm, the six songs on her debut showcase Doumbia’s pristine vocals paired with traditional guitar. Doumbia’s haunting voice shines over the guitar on album opener “Kourouni” and her voice heightens on the slower, melancholy “Djankonia”.  Since her debut album, Doumbia has toured the world with plans to tour in 2020. In 2011, another early album, La Grande Cantatrice Malienne Vol 3  was chosen to be the first Awesome Tapes From Africa release. The reissues of Doumbia’s work allow new fans from around the world to experience her important music.

To put it plainly, Brittany Howard is a powerhouse. Howard made her name as the front woman for the Alabama Shakes in addition to her side projects Thunderbitch and Bermuda Triangle. Stepping away from her group work, Howard’s debut solo album, Jaime, interrogates loss and self-discovery.  Named for her late sister, Howard spins in autobiographical details throughout the album. On the piano-laden “Goat Head,” she references a racist attack that her parents experienced as a biracial couple. On the soft yet punchy “Georgia,” she explores recognizing nascent attraction to an older girl as pre-teen. Lead single, “History Repeats,” has a slow, funky groove that sets the tone for the album. Another favorite, “He Loves Me,” Howard sings about religion over a soulful, rock ‘n’ roll melody. At its core, Jaime is about self-reflection and personal history. On Jaime, Howard has given listeners a peek into her barest self.

Listening to Lima punks’ Perra Vida’s first LP, Eterno Retorno, it’s hard not to feel instantly super-energized, ready to fight the powers that be and build strong community at the same time. The group made our Best of Punk with their spirited debut EP last year, and Eterno Retorno builds out their sound delightfully, with brash, bright songs, all rough riffs, bouncy percussion, and vocals that can turn from searing to triumphant with a knife’s quick flick. Vocalist Diana Matos rails against society’s most oppressive aspects (“Noticias Podridas,” on sensationalized violence, and “La Marcha,” on migration and borders, and “Fachito,” on machismo, are standouts), but she also turns inward and personal, exploring relationships that have fallen apart (“Salte di Mente” and “Oportunista” are portrayals of personal betrayal and parasitic social climbers as good—or better—as anything in the youth crew canon) and been put back together (the hopeful “Dia Nuevo”).

The way Matos emotes is so sharp it’s hard not to feel all of her feelings along with her, especially when the instrumentation really underlines that; the group is clearly a cohesive unit and the way they move together is airtight. On “Instinto,” an expression of deep frustration with a relationship that won’t work no matter how hard one party tries, the songwriting vaults between a more melodic verse and a more forceful chorus, with a small bridge leading to a ramping up of the chorus into big percussion and a big singalong ending. That an experience so personal could turn, via music, into something so communal is one of punk’s greatest strengths as an ethos, and Perra Vida really exemplify that tendency.