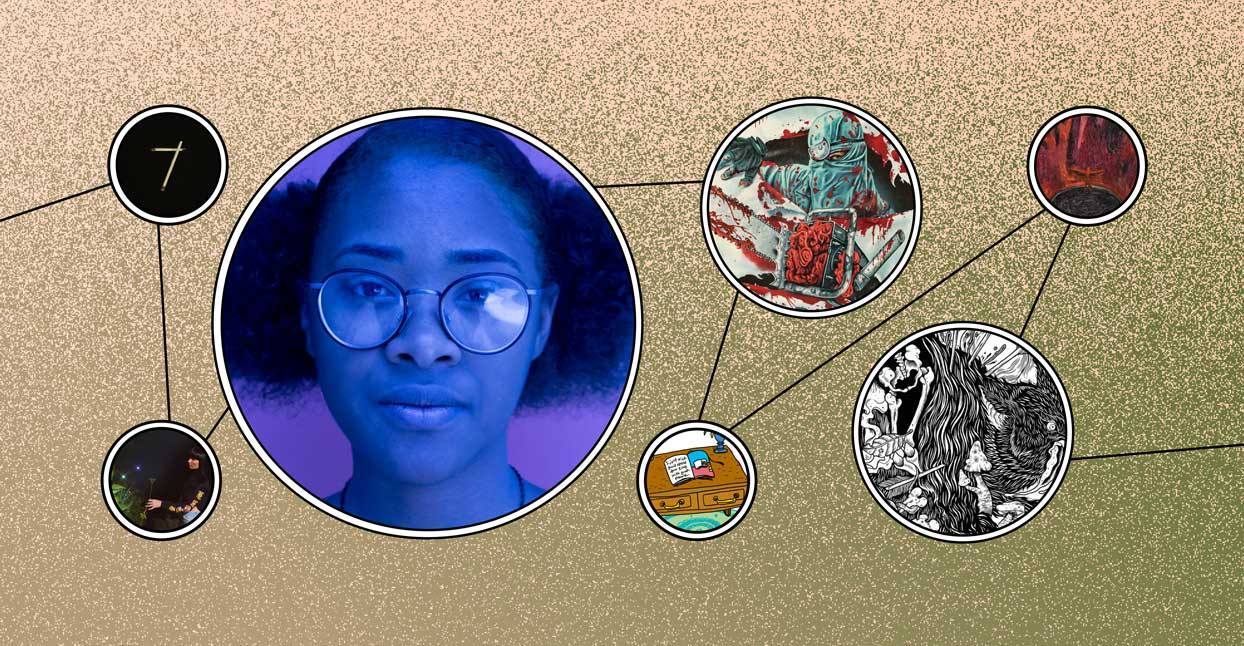 Born Days
Where We Live

It might seem a little weird to describe a one-woman goth-pop project as charming, but that’s exactly what Melissa Harris’s work as Born Days is. (Harris is clearly also extremely smart.) Harris’s sense of pop songcraft is immaculate; she knows how to use her voice, delicate but with a core of crystalline strength, to reach for melodies that are simultaneously angelic and plangent. No synth element is out of place, and her production is clear and sharp. And she never forgets that even the most minimalist dark music should have a core of romanticism; “Anywhere” and “Glitch,” for example, are complementary songs about the highs and lows of true intimacy. “Is This Reality” floats webs of sparkling synths and warping, processed vocal melodies over a trip-hop beat, making me think fondly of the mid-to-late ‘90s goth scene without evoking any of its many corny pitfalls. And opener/single “Where We Live” is a sublime, immediately infectious bridge between the ‘80s synth-pop Harris clearly adores and contemporary electro-pop.

Harris is still a relative unknown outside of Chicago, but I’m betting that won’t be for long; you just don’t write songs this good without people taking notice. (Her 2017 debut EP, Be True, is also well worth your while.) Calling it now; her star’s on the rise.

Lima producers Dengue Dengue Dengue have been working for years on crafting a truly unique aesthetic. While the fusion of folk rhythms and electronic music, particularly Central and South American folk music, is a popular approach for many musicians, the duo stands out with their elaborate costuming—traditional craftwork with a futuristic edge—and their approach to song construction. (Their work is both highly textural and rhythmically complex without feeling like it’s too much; each element has space to shine. And they’ve been slowly moving towards tracks that are more songlike, with more cohesive structures than their earlier work.)

On their latest, Zenit & Nadir, they join with members of the Ballumbrosio family, perhaps the stewards of Afro-Peruvian music in their home country; the Ballumbrosios’ live performances mesh in fascinating ways with Dengue Dengue Dengue’s electronic atmospheres and percussion, adding dimension and personality to each track and unifying the disparate moods and ideas across Zenit & Nadir. (If their reverence for the complex history of Afro-Peruvian traditions and people isn’t apparent from these words, just listen to “The Invisible Ones,” where Angolan poet and musician Kalaf Angelo makes it clear as day, over a haunting, rattling soundscape.) Dengue Dengue Dengue can conjure beautifully ominous atmospheres (“Coimú Gqoimú”) as easily as they can capture a sense of delight and exhilarated celebration (“Banyuwangi”); each track has enough detail for close listening, enough rhythm to capture the hips. Zenit & Nadir truly feels like the most fully realized version of their vision yet.

This being the spookiest, and therefore best, month of the year, I’ve taken it upon myself to showcase at least one terror-inducing release a week from now until November 1st. Horror, the excellent and accurately-titled new album from 30-year deathgrind veterans Exhumed, is the perfect record to kick things off. A riveting, if brief, display of the musical macabre (only one of its 18 tracks extends past the three-minute mark), the San Jose band’s ninth album melts their rancid sound down to its raw ingredients: untempered aggression, mangled arrangements, grinding rhythms, unnerving vocals, blood, beer, and more blood. At least they were kind enough to title each song so as to warn us what’s in store; “Naked Screaming and Covered in Blood,” “Dead Meat,” and “Utter Mutilation of Your Corpse” play out as gruesomely as you’d think, their violent camp contrasted with all-consuming riffs and rapid-fire blast-beats. Tis the season for terrifying #content, and Horror most certainly fits the bill. Squeamish? Just don’t look at the lyrics sheet — you probably won’t be able to make them out anyway. BOOM, problem solved.

Let’s just cut right to the chase: Who is this band, where did they come from, and how are they so good? Bandcamp’s Andrew Jervis, host of Bandcamp Weekly, was the first person to put them on my radar, and the instant I heard that stuttering bassline on the first track of their album 5—released in May—I was all-in. (I endorse checking it out for yourself, as I suspect your results will be the same.) Then, this past Friday, they released another record, this one called 7, that is somehow just as good as 5. Try Googling them—I did. I found a one-sentence blurb that clocks the project as a trio fronted by London-based musician Dean “Inflo” Josiah. That’s it. So here’s what you need to know: Sault take the best elements of Liquid Liquid and ESG—the rubbery, funky basslines, the percolating rhythms, the playground-schoolyard sing-song refrains—mix in elements of R&B and soul, and let the sparks fly. But even that isn’t enough to nail how irresistible this record is—“Tip Toe” sounds like a lost track from the original iteration of the Sugababes; “Living in America” is almost dubby, with its bloated, creeping bass and far-off vocals. It’s been ages since I heard something this immediately arresting. What stands out is how minimal it all is: bass is the dominant instrument by far, front-and-center in every song, carving out deep, fat, post-punk-y grooves. Guitars only make cameos—a little chicken-scratch here, a little bent-wire ornamentation there. The rest is just empty air and joyous vocals. It feels like the band is playing in the middle of an open field in the dead of night, their silhouettes the only thing visible against the field of black. It seems impossible that this band won’t break big within the next year; now’s your chance to be the person who told all their friends about them.

2019 has been something of victory lap for indie pop band Say Sue Me, who are still riding (and touring the world on) the comet tail left by last year’s wistful full-length Where We Were Together. This year has seen remastered vinyl reissues of their first two EPs, formerly only available in South Korea, and a fundraising single that doubled as a cheerful tribute to the heads of their English record label, Damnably. (It’s very cute.) Latest single Your Book immediately feels like a bolder version of Say Sue Me, the hooks more vibrantly rendered, the experimentation more subtly submerged. A big change here is in the foregrounding of Sumi Choi’s vocals, bright and shiny with confidence, which also better showcases her increasingly poignant lyrics—“You got too many stories/ Open and show us,” she sings on the title track. Say Sue Me also seem a little bit happier in general these days. There’s less whiskey-drunk longing for human connection and more celebration of actual connection. “I just wish you’d spend your time with good people,” Choi sings on sweet jangly b-side, which is good advice (and also a good song.)

Thigh Master are a band from Brisbane, Australia, which means that—most likely—they rightly loathe being compared to other Antipodean bands. But, it must be said: When those clangorous guitars and wry vocals stumble into frame on opening track “Six Ft. Barrier,” it’s almost impossible not to think of The Clean. So let’s reframe that comparison: This is a good thing! The Clean are one of the greatest bands ever! Who wouldn’t want to sound like them? Also, it must be said: after that opening salvo, Thigh Master quickly start sounding like no one other than Thigh Master. “Entity,” the track that follows, is loose and rambunctious. Matthew Ford has the kind of fantastic, Robyn Hitchcock-y voice that inflates vowels like balloons, and stretches out absurdist phrases for a beat or two longer than they should go on. “Subtropic Buck (Always A Loan)” is sunny and direct, and the whole band piles on for a gently melodic chorus; “Porto’s Lullaby” gets maximum mileage out of a few tense strands of guitar and soft, distance vocals; and the album-closing “Exodus” is a proper rave-up, with Ford belting out at top volume as suzz guitars and cardboard-box percussion scurry wildly beneath. The band just hits the sweet spot over and over and over again, proving there is still a whole lot of charm left in big, banging riffs and falling-down-the-stairs playing style.

Twenty-one year old Houston singer Peyton Booker is a breath of fresh air. Known mononymously as Peyton, she comes from a family of musicians: Her late grandmother, Theola Booker, was a Grammy-nominated gospel singer and music teacher for a young Beyoncé. The classically trained singer has collaborated with The Internet’s Steven Lacy, and her 2016 song “Sweet Honey” was featured on an episode of HBO’s Insecure. Her 2019 EP, Reach Out, sounds like a throwback to the saccharine love R&B bops that dominated the mid-‘90s (think: Brandy and Monica). Soulful opener “intro/hello” plays like a musical voicemail, with Peyton’s sugary vocals asking a love interest to get in touch. On the ’90s retro sounding “laylo/crazy4u,” an ode to having a crush but not wanting it to be obvious, Peyton sings, “I don’t want to trip, I want to lay low.” Single “clown song” is a notable turn from the overall theme of unrequited love. Peyton cooly address a lover with “What do you want from me? I’m not a toy.” On Reach Out, Peyton puts a nice spin on frustrating, unreliable love. This is a project to be played while sitting up in your room and thinking of someone special.