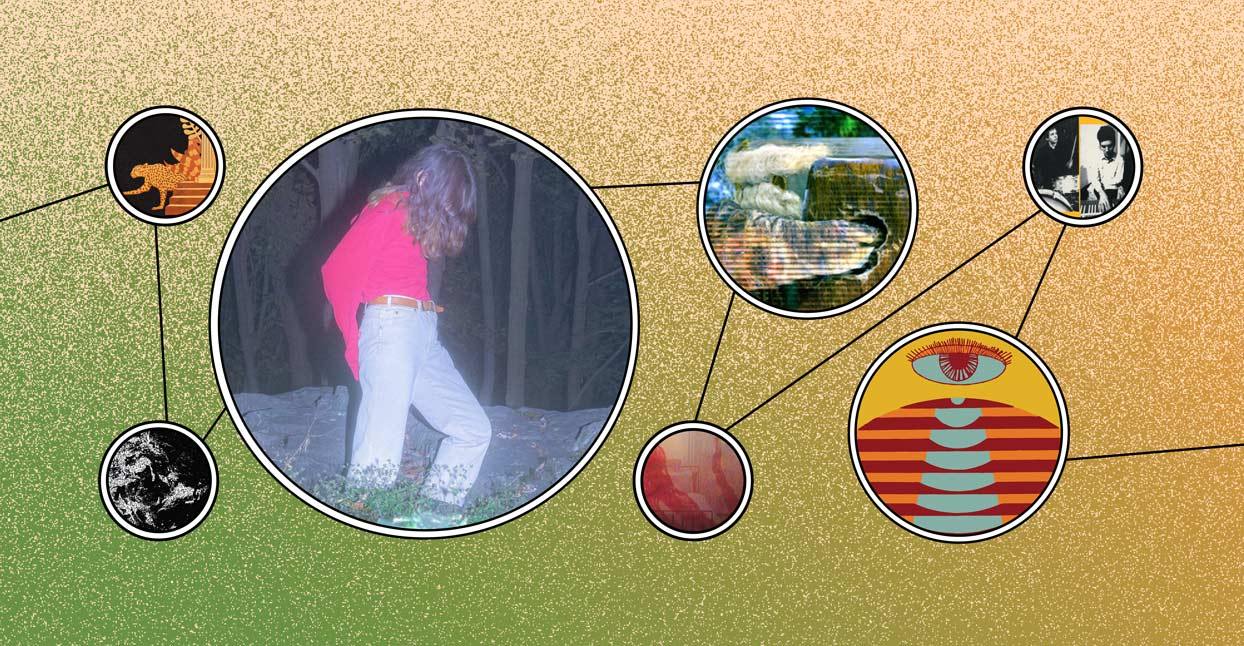 Brooklyn’s Anamanaguchi are frequently credited with bringing chiptune—a form of upbeat, electronic pop music, which develops the eight-bit sounds produced by vintage video game systems as the primary melodic vehicle—into the cultural forefront earlier in the decade. The four-piece’s influence and omnipresence within that scene cannot be understated; Anamanaguchi’s last record, 2013’s self-released Endless Fantasy, was the end result of a massively-successful Kickstarter campaign (it raised $275,000, over five times the original goal); their biggest tour to date was an opening stint in 2016 for the Japanese hologram starlet Hatsune Miku, the most famous fictional performer of all time. With their digitized apotheosis complete, Anamanaguchi kick-start an exciting new era as an honest-to-god rock band with [USA], their Polyvinyl debut and (per the band’s Peter Berkman) “the first Anamanaguchi album deliberately set in the real world.” The neon ’80s nostalgia persists (what would an Anamanaguchi album be without it?), but the underlying hardware sounds more grounded and current, and in the case of songs like “Lorem Ipsum (Arctic Anthem)”), sometimes downright punkish. Nerdy fabulism might be their claim to fame, but on this LP, they’re as real as it gets.

Common Holly
When I say to you Black Lightning

“Don’t panic, don’t freak out,” warns Brigitte Naggar on the outro to “You Dance.” Her voice is clipped and her words pointless, because it’s already too late for warnings though we’re only three songs into Common Holly’s rough and nubby third release When I Say To You Black Lightning. This LP is a series of small freak-outs, one after another. Each song grows ever loopier and more inward-loooking in its delivery, culminating with Naggar repeating, “I’m crazy, okay?” as the affair draws to a close. The hushed dissonance and grimly grimy indie production of When I Say To You Black Lightning recalls the primitive pleas of Moon Pix with an extra scoop of disassociation, but it’s equally a record centered around the strange euphoria of the mental breakdown. There’s a dark, manic sparkle in Naggar’s murmured downbeat choruses that crack open into optimistic open chords paired with sharp observations both fantastically revelatory and mortally brutal in their cold honesty. Of course the devolution of the ego can be as brimful of blissful visions as any hallucinogenic experience, and When I Say To You Black Lightning lives up to it luminescent title when Naggar fearlessly throws her arms wide to embrace the judgement of the universe in all its quietly horrible, molasses-paced glory. Don’t freak out.

Garcia Peoples
One Step Behind

Jam bands are pretty cool. They’re honest about what they are. For example, this band is called Garcia Peoples and the entire first side of their new record, One Step Behind (which, honestly, LOL), is taken up by the 30-minute long title track. It takes about 8 minutes to kick in, FYI, and is 100% exactly what you expect and want it to be: a happy and well-plotted longform musical trek through various styles of pleasant, expertly constructed psychedelic guitar rock, heavier on the skill than the effects. It’s not a totally seamless blend, but that’s alright because it means there’s something for everyone—there’s the proggy noodly bit, the cool medieval-ish part with the organ, and also, unexpectedly, a sort of art rock-esque dancey section at the end. And then there’s the B-side: a warm and classic-sounding keyboard-driven 70s rock number that will resonate in the hearts of everyone who secretly, sincerely loves Grateful Dead. Like I said, jam bands are honest.

For those of us who lived through it, it feels like it just happened last month; but the “New York City Rock Revival” documented in Lizzy Goodman’s great, gossipy beach read Meet Me in the Bathroom is rapidly approaching its 20th birthday. (I’d say “Almost old enough to drink!” but booze was already the fifth instrument in most of those bands.) Assuming for the moment that the borders of this movement are clearly defined—they’re not, but I’ve only got so many words here—Jonathan Fire*Eater were the canary in the coalmine, the band who preceded the whole thing and proved there was an appetite for herky-jerk guitars, disaffected singers, and nihilism dressed up in natty clothes. What’s surprising about listening to Third Man’s new reissue of Tremble Under Boom Lights nearly 25 years after its release is how well the songs have held up. The reissue is a bit of a Frankenstein, combining five songs from the original, long out-of-print Mini-LP with songs from subsequent EPs, but it all holds together beautifully. Songs like “Give Me Daughters,” with its deranged carnival organ—a JF*E staple and secret weapon—feel creeping and lascivious, while the punch and swagger of “The Public Hanging of a Movie Star” pairs the menace of The Stooges with the groove of Girls Against Boys. Crucially, the reissue finally gives the band something to hang their legacy on—their lone studio full-length, Wolf Songs for Lambs for DreamWorks, was a notorious whiff. Like most pioneering outfits, JF*E imploded before they could reap the rewards of their struggle. Lupton, who passed away last year, was reportedly a nightmare to deal with, and the rest of the band regrouped and formed The Walkmen two years after JF*E broke up. Tremble Under Boom Lights is a grim, grimy document of a specific place and time that has aged just as well as any of the more famous albums it inspired—arguably, better.

My final Spooky Friday pick of 2019, Pissed Regardless’ “Imperial Cult,” is a motherlode of depravity, all sinister debauchery, glib devil worship, and festering breakdowns – just the thing for one last Halloween bender. Beginning with the undeniable “Three Decades,” a scorched-earth stomper boasting a cocksure riff redolent of Motörhead’s “Ace of Spades,” except far more perverse; the San Diego crushers deliver a relentless, well-rounded listening experience that’s bound to resonate with fans of Toxic Holocaust, Gatecreeper, Candy, or others. Don’t miss ragers like “Halls of Hate” and “Maniacal,” which showcase Matt Gerken’s harried, expressive vocals, or the five-minute finale, “Hell’s Coming With Me.” Until next year — stay spooky!

Various Artists
Back to Mine – Jungle

The Back to Mine mixes were originally released from 1999-2008. After a long hiatus, the 20th anniversary edition was released this past January. The latest edition, released this month, was curated by the soul music collective Jungle made up of Tom McFarland and Josh Lloyd-Watson . With a healthy melange of soul, jazz, and experimental artists, the Jungle arranged mix is a vibrant mix of smooth, eclectic songs.

The sensual opener, “Steam Heat” by Barbara Moore sets the tone. Futuristic groove, “High Roller” by Kamaal Williams serves as the half-way mark for the mix and the booming “Lavender” by BadBadNotGood featuring Kaytranada seems to serve as an anchor for the mix’s second half. The aching “Masterpiece,” by the anonymous Sault and the slow, crooning “Live On” by the Flying Stars of Brooklyn NY are also good additions to Jungle’s handpicked playlist. This edition of Back to Mine plays like a hazy, late-night party that’s hard to leave.

The Berlin-via-Argentina duo Mueran Humanos make smart, sharp post-industrial synth-pop as part of a multimedia project; their third and latest album, Hospital Lullabies, which came out in July, is accompanied by a full-length film by one half of the group, Carmen Burguess. Throughout their work, they’ve explored imagery that is at once sinister and tender, focusing on intricate layering to build tension; nothing does this more clearly than the opening of the film, set to “Vestido,” in which Burguess cradles a bloody statue. She’s wearing leather gloves; it’s unclear whether she’s murdered someone (the blood only gets onto her face as she presses against the statue), whether she’s bent on destruction, or whether she’s crazed with mourning. There is the bridging of the manmade and the human body, of light and shadow, of past and present, of familiar gothic imagery and surrealist lyrics. (“The problems of the future/ I already had them yesterday,” intones Tomas Nochteff, the other half of the group, on “Los Problemas Del Futuro.”)

The story developed over Hospital Lullabies’ runtime is one of liminality, of seeking, of disorientation and alienation—from oneself, from the expected, from consensus. (There’s more than one reference to UFO mythology.) It can be lovely-strange, as on “La Gente Gris,” or a fever dream, as on “Cuando una persona común se eleva.” The drum machine can patter gently, or it can puncture. Synths can swirl, or they can stab. (Also, for songs without big standard pop hooks, these tracks stick in the craw. Mueran Humanos are experts at building a mood.) It’s fascinating to see the duo build something so open-ended from well-trod ground; I’m reminded of the fact that the occult and spiritualist boom in the 1800s, all that channeling and all those ghostly and demonic encounters, wasn’t purely meant to bilk spectators out of their pocket cash with a bit of cheesecloth produced from the mouth. It often pulled on a sense of possibility; when the world around you is grim, look to the spirits, look to the beyond, for hope.