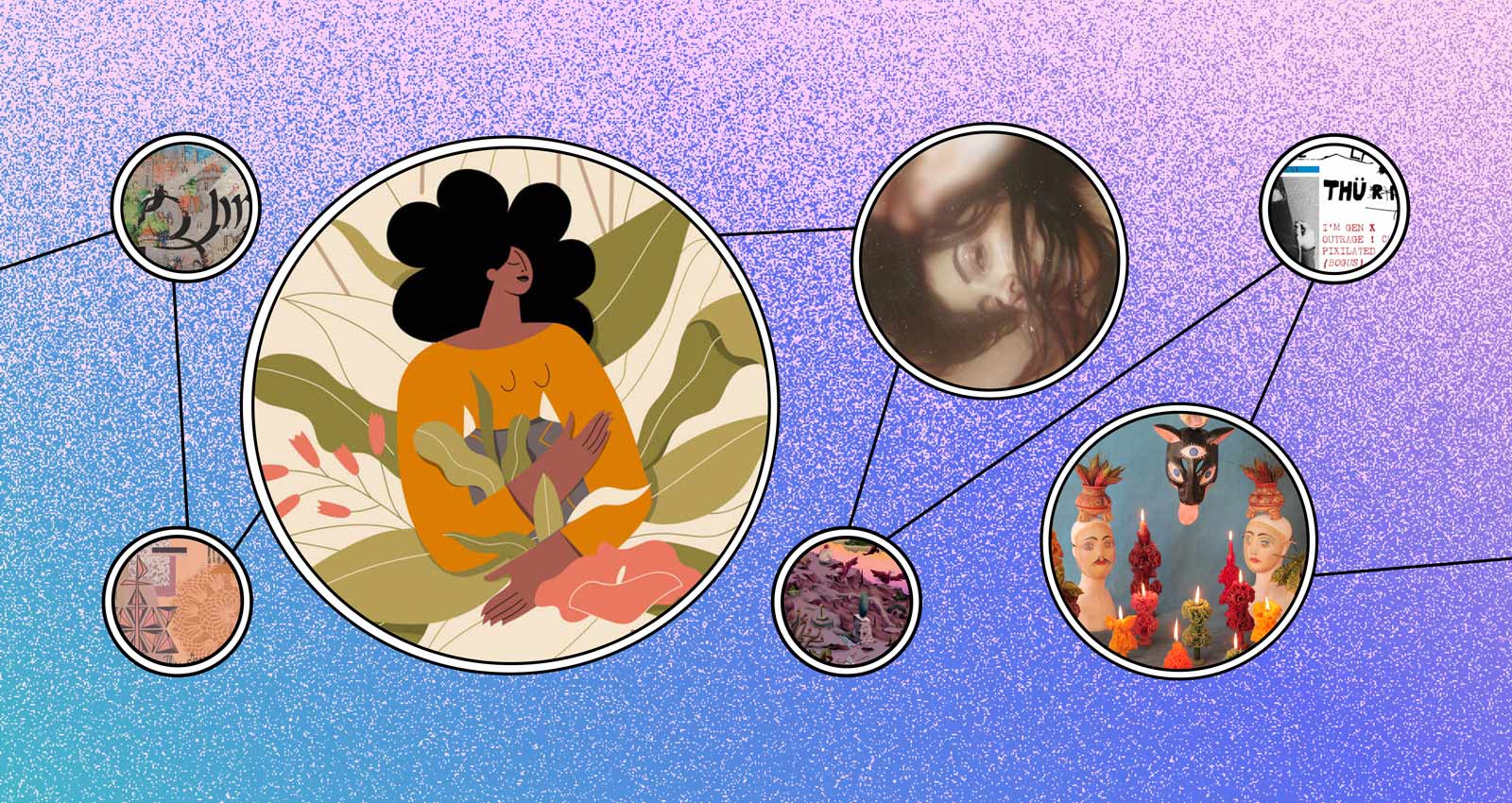 Christoph de Babalon has been stalking the darker end of electronic music since the mid 90s, when he released a string of acclaimed albums and EPs on Alec Empire’s Digital Hardcore imprint. He’s maintained a consistent workflow ever since. His output can be dizzying at times; a trio of compilations—one in 2014, two in 2017—document his early ‘90s work in songs that flit from scabrous, industrial-edged techno to mutant drum & bass. His latest, for the outstanding London label AD 93, is altogether different. Here, Babalon builds every song on murky, chilling bass-forward melodies—bands of groaning sound that stretch out eerily, occasionally swelling to achieve a Bernard Hermann-y level of sudden terror. What he does above that baseline sound varies from track to track: on “Swimmer,” he tops it with frenetic, clattering rave drums making for an unsettling juxtaposition: the deep bass tones warn of impending doom, while the hectic rhythm above radiates joy. On “Cool Priest,” the chaotic jungle rhythm is shoved to the background, while the foreground is occupied by sporadic choral samples and a swelling sense of dread. The album’s title translates to mean “Help Yourself,” but the ominous tone of the music makes it clear that command is not about feasting, it’s about rescue and self-preservation. On Hilf Dir Selbst!, the enchanted forest is full of ghosts, and it’s closing in on all of us.

The Garrys
Get Thee to a Nunnery

The Garrys are three sisters from Saskatoon, Canada who’ve been doing their spooky surf pop thing on the prairies of Saskatchewan for years with a series of solid releases, including last year’s weird and highly original score for the 1922 film Häxan: Witchcraft Through The Ages. Their latest record, Get Thee To A Nunnery, is a huge step up for a group who’ve always had a great pop record in them—and here it is. Working with producer Dallas Good of Toronto band The Sadies, the Garrys’ once-charmingly rickety sound has become full and lush, the sisters’ harmonies alternately eerie and velvety as the band mixes up a nostalgic potion of doo-wop, sad-eyed country & western, and spectral surf while the lyrics explore the more repressive cultural aspects of the midcentury era that inspired their own sound (many of the songs are partially by their mother’s experiences in an all-girls Catholic boarding school in Saskatchewan.) The record’s religious symbolism dovetails nicely with the group’s penchant for the macabre, and the reverence with which the band treats the sonic aesthetics of the past combines with a natural sympathy for the injustices suffered by those who were actually there to make Get Thee To A Nunnery an engaging re-imagining of both old sounds and an old story. I love this band.

The second album by the Montreal-based artist is a delicate exploration of identity, wellness, and community. Kind’s aptly titled tracks distill the album’s big questions and themes succinctly for the listener. On the airy opener “I Woke Up (in the Water) Iyer sings, “I woke up in the water/I woke up with my love hanging on by a thread.” The mood gets heavier on the discordant “My Mind Keeps Running” where Iyer sings, “But my mind keeps running to a dark hole where I keep my soul buried deep.” The album’s standout track is the boundless “Please Don’t Hold Me Hostage for Who I Am, for Who I Was” which is both an anthem and a plea. Iyer is a trained violinist and was accompanied by bandmates Alex Kasirer-Smibert and Daniel Gélinas for the album in addition to brass players, a choir, flutists, and harpists. The layered sound of Iyer’s folk-pop could’ve only been accomplished by collaboration and it makes the album’s themes about the importance of community even stronger.

When we spoke with Ada Lea two years ago, she described her debut album, What We Say in Private, as “different scenes within the same small room.” The result of Lea—born Alexandra Levy—journaling every day in order to process a breakup, Private was an insular record, the sound of a person taking stock of their own emotional inventory. By contrast, her follow-up—one hand on the steering wheel, the other sewing a garden—begins at a party, “everyone drunk off of their faces,” as Lea, now self-possessed and more than a little bit salty, takes in the scene with arch amusement: “While we were outside having a smoke/ I heard you asking around, ‘Hey, could you find me some coke?’” Lea’s debut was about inner landscapes, but this one is about physical landscapes—specifically, Lea’s home city of Montreal and the people who populate it—and its songs are slice-of-life vignettes set to arrangements that run from brittle new wave (“Can’t Stop Me From Dying”) to sighing dream pop (“My Love 4 U Is Real”). Lea offers songs as snapshots here, filling them with pointed visual imagery: “Hand in hand up the cathedral steps/ Where we heard the wedding band/ Foreshadowing something tragic, something mad.” On “Saltspring”—which features a guitar phrase eerily similar to the one in Jackson C. Frank’s “Blues Run the Game”—she opens with scene-setting so beautifully compact and direct that you can almost hear the conversation in your head: “You called me to tell me/ That you missed the last ferry heading to Saltspring/ but that I needn’t worry, you’d be on the first one come the morning.” That narrative economy serves Lea well time and time again (particularly in my favorite lyric on the whole album: “Every year it’s just a little bit darker, then the darker gets darker, then it’s dark as hell”), making steering wheel a short story collection to get lost in.

In a lovely interview by Isabelia Herrera with Nicaraguan-Canadian artist Brandon Valdivia, aka Mas Aya, Valdivia makes his purpose clear: “I’m trying to meld a political take in addition to a very spiritual take. You have to act; you have to be in the moment; you have to be in the world.” Active in the Toronto experimental/DIY scene, he envisions Mas Aya’s work as somewhat reactive to that scene’s nihilism. On his latest album, Máscaras, samples from Nicaraguan leftist organizers from the 1970s to the present day are woven throughout the record. Valdivia plays a number of different wind and percussion instruments from different global folkloric traditions—some, like the Andean quena flute, are close to home. Melded with thoroughly modern and also now-global Black American electronic music styles like trap and footwork, as well as ambient, this is music as thoughtful and contemplative and nuanced as it is active, and it has a clear sense of intention and imagination often missing from other works that blend the traditional and the futuristic. On the standout “Tiempo Ahora,” featuring Valdivia’s partner Lido Pimienta, Pimienta’s vocals, often wordless, feel intimate and carry a sense of the sacred. Valdivia sets them against a spacious backdrop, with off-kilter, minimalist rhythmic hits and glowing synths. Together, it feels like they are envisioning rituals to open up the world, routes to possibility.

One Step Closer
This Place You Know

Compared to other forms of hardcore, straight edge has kept a relatively consistent profile since its rise in the late ’70s and early ’80s. Perhaps as a consequence of the movement’s ascetic principles, or maybe just a “if it ain’t broke, don’t fix it” kind of thing, the blueprint established by bands like Youth of Today and Minor Threat remains the genre’s golden standard, universally studied and rarely challenged. One Step Closer, from Wilkes-Barre, Pennsylvania are cut from the same philosophical cloth, and construct their songs with the same economical and emotional mindsets, focusing on themes of sobriety, depression, and self-reliance, but their debut album This Place You Know is anything but procedural. Their take on straight edge is perhaps the most wide-reaching interpretation of the style yet, tempering the harsh simplicity and lyrical frankness we’ve come to expect with layered textures and sweeping, melodic flourishes, delivered with soul and daring. Songs like “Lead to Gray” and “Pringle Street” work in elements of ’90s emo and turn-of-the-millenium post-hardcore, with see-sawing dynamics and swelling guitars reminiscent of early Touché Amoré, or maybe a more aggro Sunny Day Real Estate. To the punk fans: regardless of whether you’ve got an X on the back of your hand, you’ll want to check this one off your list.

Thurst are eternal underdogs and consistent contrarians, the sort of band the smaller-minded among us might label haters except they’re actually always right (the band that is.) In the past, the brother-sister of Kory and Jessie Seal have taken aim at music scene cliquishness and modern life malaise with down-tuned slacker rock and irony-laden ripostes. On their latest, I’m Gen X (spoiler: they aren’t, actually), Thurst are still kind of mad about all of the above, but they’ve added the algorithmically generated outrage about every-fucking-thing to their shit list. Life’s a bummer, but the music isn’t. With unapologetically 90s-inspired guitar-driven songs that feel more tightly-coiled than ever plus ultra-wordy, observational lyrics foregrounded in high fidelity so you hear every clever aside, I’m Gen X is as strong an indie rock record as you’ll hear in 2021. A lot of bands with more name recognition splash around in the same Pavement-esque pool of affected insouciance; but for all their nonchalance, Thurst actually do care, which makes all the difference. While both Seals have sharpened their instrumental prowess (Kory on guitar, Jessie on drums), the sympathetic interplay between their vocals remain a highlight of this now long-running group who deserve far more attention than they’ve ever been afforded. That’s what you get for being a hater, I guess.