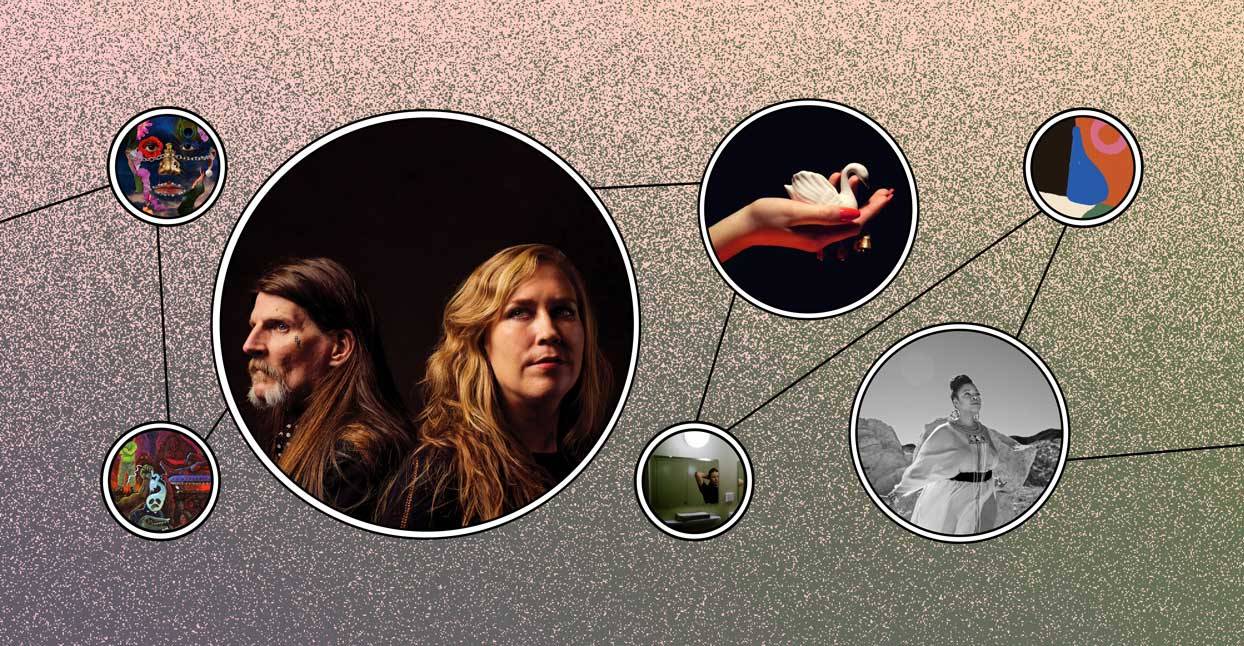 Nearly four years after 2015’s Matter of Choice—one of the rare post-punk records gifted with a Shonda Rhymes sync—Cold Showers make their proud return to Dais with Motionless, a sophisticated goth-pop suite bursting with big-tent ambitions. In dispelling the murky, shoegaze-inspired miasmas that engulfed their first two LPs, songs like “Faith” and “Measured Man” illuminate a simple, pure truth about the Los Angeles band, one the folks at Shondaland have known all along: these guys make some of the catchiest, most well-constructed mood music around. If you’re a fan of Drab Majesty, Boy Harsher, Merchandise, or any other modern new-wave practitioners, you’ll almost certainly dig this.

Earth
Full Upon Her Burning Lips

Earth’s latest is a record that feels curiously intimate and subtly powerful, with as many plainly beautiful parts as hazy, evil-sounding ones. Though the pacing is slow, Full Upon Her Burning Lips isn’t really a record that demands patience from the listener as these songs are immediately accessible, melodic, and feature enough interesting push-and-pull between Dylan Carlson and Adrienne Davies to make it a record meant for foregrounded listening.

As an editor here at the Daily, I strive to keep my Seven Essentials picks as stylistically diverse as possible from week to week. However, as a devout member of the church of nasty riffs, I am also obligated to spread the word each and every time a particularly kickass new hardcore band puts out a particularly kickass new album; such are my duties as a missionary. And so, with Moss Icon as my witness, I do declare: Heavy Vibe Music, the debut effort from Montreal band Gazm, is a groovy, psychotic, face-melting rage not to be missed. From the cocksure opening salvos of “Fuck With Me,” to the sputtering thrash breakdowns of “1-800-Cry-Baby” and Cupid’s Lonely Son,” every whiplash-inducing arrangement brims with feral giddiness — lending the record a playful lunacy that’s hard not to love, even if hardcore’s not usually your style. The only thing more admirable than Gazm’s force is their faith, which is to say: Nasty riffs await.

W.Y. Huang (otherwise known as Yllis; fans of the Beijing electronic tastemaker label Do Hits will already be familiar) makes mesmerizing, highly textural experimental pop (his use of space recalls James Blake at his best). On his latest, Crossing The Great Water 利涉大川, Huang, who splits his time between his native Singapore and New York, calls on the rhythms and melodies of Singaporean Taoist ritual for inspiration. Single “Mercy {开光}” features crisp, complex beats (which sound both wooden and metallic), over which woozy, processed vocals snake like smoke from incense and melodic motifs are stamped; the following track, “临 {19} (Becoming Great)” is also heavily percussive and dramatic, mixing scrambled, skittering synth patterns with powerful percussion for a heady sound that bridges centuries-old spiritual practices, our contemporary moment, and visions of a future beyond borders. Huang says in the liner notes that this is a highly personal and spiritual release for him; his unique perspectives, vibrant imagination, and able hand with songwriting, instrumentation, and production make it a standout for listeners too.

Pale Spring hails from Baltimore, but the music on her haunting new album CYGNUS traces its history to the point in the mid ‘90s where trip-hop was starting to give way to groups like Morcheeba and Lamb, who found artful ways to blend downtempo electronics with serene, soulful singing. There are other touchstones, to be sure—there are scattered moments when Pale Spring, aka Emily Harper Scott, sounds eerily similar to Sade—but the bulk of CYGNUS drifts along on a river of placid synths. The results are hypnotic: on opening track “Silence,” Scott’s voice trips gently down a rickety ladder of percussion; on the elegiac “Forevermore,” she stretches melody lines out in parallel with the twisting ribbons of synth beneath her, making the song feel ghostly and forlorn. Even when she wanders into different, sometimes harsher terrain—as she does on the crackling, bass-heavy closing track “Quaratines”—her voice maintains its delicacy, tenderly exhaling notes rather than overpowering with showy virtuosity. CYGNUS is an enveloping album, one that casts a spell early, and sustains it over the length of its runtime.

As someone who spends much of their life anxious, in a state of hypervigilance, there’s a lot that speaks to me about Berlin singer-songwriter and producer Rosa Anschütz’s stunning debut EP, Rigid. Across four tracks, Anschütz builds a sense of familiar foreboding, shadowy synth chords slanting across a latticework of spare beats and trembling bass. Her vocals, articulating a lyrical scrapbook of internal observations, start out clear on “Diopter” but by the end melt into the atmosphere. “Rigid,” with its frayed-wire post-industrial backbone, is as clear a depiction of the physical manifestation of PTSD-related nightmares as I’ve ever heard. “Your body wasn’t trembling/ And open were your eyes/ Accelerating without tension/ To fall hasty into sleep/ Precious is your body/ Precious is your body/ You’re dreaming into something/ Wake up feeling bleed,” Anschütz intones, sounding like a spellcaster of sorts. Beautiful, dramatic, highly personal, and carefully crafted, Rigid resonates in every clenched fist and jaw.

The long and the short of it is that Jimetta Rose can sing. The Los Angeles-based singer’s music is akin to a musical journey to the cosmos. A blend of poetry, Afrofuturism, soul, funk, and R&B converge to create a distinctive singular style for Rose and her second album, The Light Bearer.

Rose’s music sounds keenly familiar—think childhood weekend mornings soundtracked by your parent’s soul albums of yesteryear. Album opener, “Rhythm of Life,” sounds reminiscent of the golden era of soul. Album standout, the synth-heavy,  futuristic “Master of Disguise” is infectious with a repetitive chorus that says, amongst other things, “Can’t lose my focus, can’t afford to break my stride.” On “Catch a Vibe,” Rose sings over a flipped and reversed classic funk beat and uses the “You got me shook up on your love” line from the Mary Jane Girls 1983 song, “All Night Long”. Rose ends The Light Bearer with the ethereal “Welcome to the World”.

The Light Bearer was expertly produced by singer Georgia Anne Muldrow. Rose is known for her impressive coterie of collaborators and this album is a shining example of her collaborative sensibilities. The Light Bearer is a grand, impressive journey through the mind of Rose and an absolute must listen.