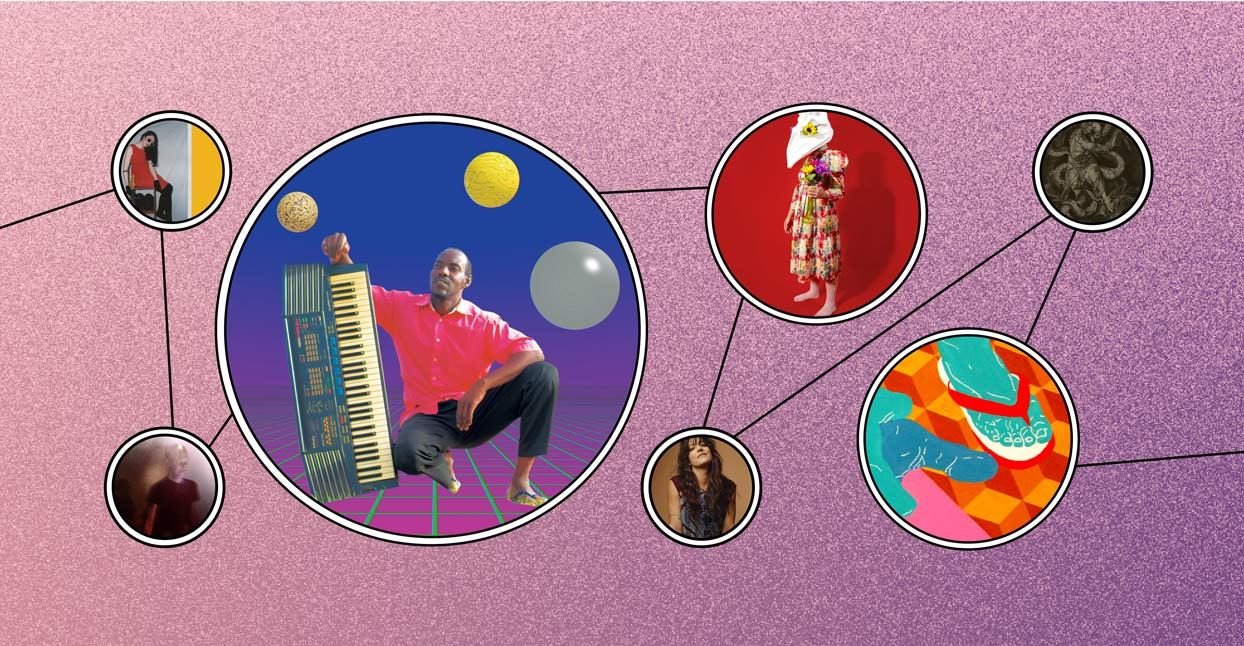 The international black-metal band Barshasketh got their name from a Hebrew term that roughly translates to “pit of corruption:” an esoteric theory which boils down human existence to an endless cycle of destruction, purification, and resurrection, the breaking wheel of fate, spinning on and on and on. The band’s inspirational trappings are hardly the stuff of Sunday picnics, to be sure, but their end goal ultimately lay in transcending that suffering, rather than romanticizing it, as so many of their peers are wont to do. On their new, eponymous album, Barshasketh do just that — shaping their massive song into a cruel, meditative self-experience that’s basically the black-metal equivalent of baptism by fire. This isn’t a record you can just throw on in the background (the tinnitus-inducing mix renders multi-tasking impossible); in order to reap the cathartic benefits, you must lend them your soul, at least for a little while – but damn, is it worth it.

German producer Christoph de Babalon describes his latest EP, Hectic Shakes, as a “meditation on the ‘inner abyss,’ the sort of abyss that lulls the listener into his sound world with next-to-no resistance.” As such, the four techno creations he’s assembled here embody an alternative definition of purgatory, trapped in amber-like stasis by way of the characteristically-unsettling arrangements that helped immortalize 1997’s If You’re Into It, I’m Out of It as a breakcore masterpiece. The sub-bass’ phantasmal backbone, anchored to brittle breaks per usual lends these beats just enough body to outlast the droning synths’ erosive power, keeping the listener forever tottering on the precipice, from start to finish. Escaping the inner abyss isn’t easy, but not for the reasons you might think; this is an isolation chamber you’ll want to trap yourself in for months to come.

Formed in 2006, George Belaso & O Cão Andaluz are a Brazilian outfit who play sprightly, surf-y experimental rock reminiscent of ’80s no-wave icons like the Bush Tetras and James Chance and the Contortions. Their long-awaited debut album — which arrives over a decade after their last show — comprises ten giddy dispatches from the Fortaleza underground where they got their start, each brimming with a fierce, fun, independent spirit. As I sit shivering here in Brooklyn, in the dead of winter, it’s nice to have tropical barnstormers like “Vitreous Humor” and “Leech” at the ready; it’s practically like taking a mini vacation, except a little more punk.

If you’ve ever seen photos of Earth’s deserts from space, you’ll know what such a change in perspective can do for our understanding of these environments. Houmeissa feels, in some ways, like a sonic analog to these peculiar, beautiful photos. There are a fair amount of Tuareg folk songs played on electric instruments to fascinating and deeply psychedelic ends, but Nigerian producer Mahamadou Moussa, better known as Hama, reinterprets these traditional melodies as fully electronic compositions. And good lord, they are spellbinding, especially when pushed toward the dancefloor (“Dounia”) or with darker, synthwave-like threads exposed (“Wassa”). Hama is adept at using lush, dreamy pads to create an incredibly full sound out of a relatively small set of elements, and it’s easy to get lost in his work—he’s also expert at driving forward motion in his tracks, inserting a break or a change just when the patterns start to feel a little bit repetitive. I particularly recommend the standout “Takamba,” with its curliquing sequences and climbing chords, which also gets a sick house-inflected remix at the end of the record.

In the video for “Seventeen,” a song from her stunning new album Remind Me Tomorrow, a 37-year old Sharon Van Etten revisits the New York of her youth, standing outside the places she used to perform when she began playing music a decade years ago. The video accomplishes a few things at once, serving as both a summary of Van Etten’s career to date, but also as a reminder of how much has changed since then: most of the places she re-visits have long since closed, and for longtime New Yorkers, seeing them again generates pangs of both sadness and nostalgia. Van Etten’s changed, too—the songs on Tomorrow are worlds removed both in sound and subject matter from the haunted gothic folk that comprised her debut, Because I Was in Love. On Tomorrow, guitar is mostly banished to the edges of the songs, providing either texture (the softly-glowing latticework twinkling in the backdrop of “No One’s Easy to Love”) or flourish (the grizzled chords that chomp and retract in the doomy doo-wop number “You Shadow”). Instead, Van Etten has ably transposed her smoky alto atop gut-punching layers of keys and organs and drums, giving the songs on Tomorrow a steely, determined momentum. The result is the most gripping and adventurous record she’s ever made—full of songs that are brash and gutsy and loud. Van Etten has talked at length about the source material for her oldest, saddest songs, and there’s no need to tell that story again here. One of the most heartening things about Tomorrow is the way she so gracefully slips into the “elder statesman” role, writing songs colored by the wisdom that comes with age. The clubs she used to play have closed, and the New York where she used to live is gone, but so are the struggles and heartaches of those early years; Remind Me Tomorrow is an album with its eyes on the future.

The Submissives
Pining For A Boy

The Submissives’ 2018 release Pining for a Boy parses through the highs and lows (mostly the lows) of romantic love with a bonkers take on bubblegum pop that might be deemed otherworldly if it weren’t so coolly idiosyncratic. The project of Montreal-based musician Deb Edison, who records everything herself at home, the Submissives match hypnotically circuitous song structures to plinky-plonk guitars, creaky violins and warbling vocals all set just slightly off-kilter. Yet for all its self-conscious kookiness, Pining for a Boy is also exceedingly clever in its construction. Once your ear becomes accustomed to Edison’s funhouse mirror take on the torch song, it doesn’t take long before you start hearing hooks everywhere. Edison’s project may be called the Submissives, but she’s totally in control here.