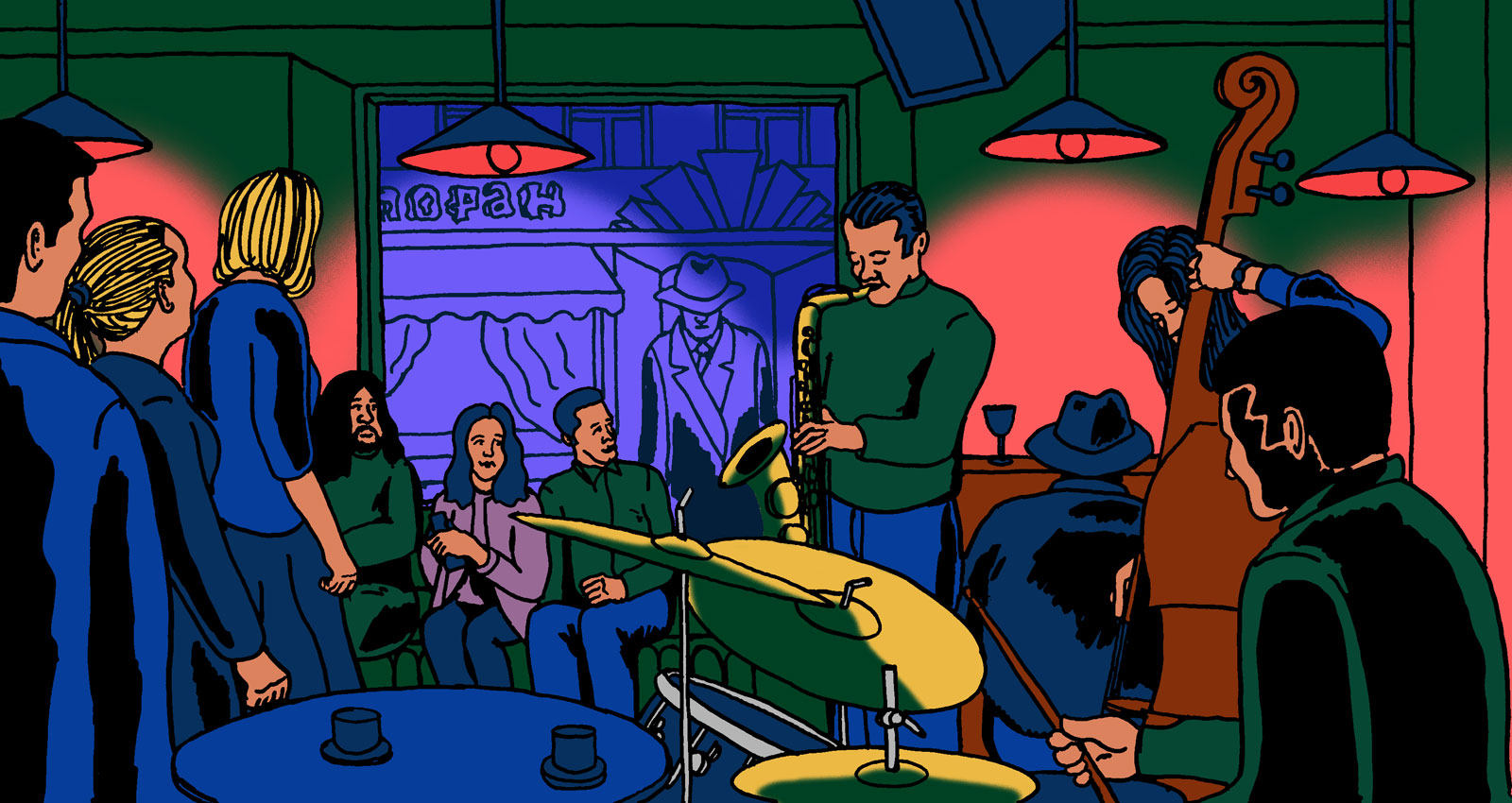 “We had to throw open some doors,” says Eugene Petrushanskiy, head of Russian label Rainy Days Records. He’s speaking about the way the label helped to nurture the St. Petersburg jazz scene; but in the context of the shutdown caused by the pandemic, that statement began to take on a more literal meaning. “We sought out a way to support musicians, the restaurants, bars, and cafes during the lockdown,” explains Sasha Mashin, the label’s A&R director, who is himself a drummer. “We got the idea to spend our energy creating something in these empty places and bring a new focus to them.” Alexander Malich, local TV host, video producer, and journalist agrees, saying, “We wanted to inspire people.” It was in that spirit that the Haute Culture video series was born.

The trio’s vision was to produce a video series and concurrent audio recording of an array of Russian jazz musicians performing in the venues and local cafes that represent the heart of St. Petersburg’s picturesque neighborhoods. “It was something we could fix in the moment,” explains Malich. “The musicians had no opportunities, because everything was closed. They’re losing money, but worse, they’re depressed, going mad doing nothing.” The bars and cafes were sitting empty, adding to the collective ennui of a city during lockdown. Malich, Petrushanskiy, and Mashin saw an opportunity.

“The plan was to do a series of sketches in the places closed during the lockdown,” Malich said of the project goal, “of musicians performing in these venues, with windows and doors open, and the city just outside. We started in June, just as everything is going into light.” The significance of the timing is explained by local pianist Evgeny Ponomarev: “In terms of weather, we’re pretty miserable most of the year, but as a reward, we have what’s called White Nights. Because of how far north we are situated, there is a time when it barely gets dark. Sometimes for half an hour and that’s it.”

As the trio started lining up musicians, they were also strategizing locations. They wanted the series to be more than merely a video tour of established jazz venues—they wanted to embrace the neighborhood bars and cafes that make the city what it is. “We chose based on the atmosphere of the venues,” Malich explains. “We wanted independent places, locally owned.  And we specifically wanted places with a window view.” Though framed in the context of life during pandemic shutdown, the video series was really capturing the love fans have for their local venues.

Those venues were also crucial to the development of the St. Petersburg scene. The city’s flagship venue, JFC, “was the first jazz stage in St. Petersburg for more than just traditional music,” says Mashin. “It’s a place for music and musicians. And if you played there even once, you can go see any show there for free.” The intimate venue in the courtyards of Shpalernaya Street is the go-to place for jazz shows, maintaining a tightly packed itinerary. Mashin first performed there 20 years ago, and still feels a strong attachment to the venue.

JFC’s bridge between jazz’s past and present is mirrored in Mashin’s two-part release, Happy Synapse. The music is undeniably modern, but it also possesses the propulsion and warmth of the hard bop age, with the kind of “bolt-up-in-your-seat” moments typical of both classic Art Blakey and new-school Brian Blade.

The Hat is another institution of the St. Petersburg music scene. Much in the same way a modern speakeasy is meant to transport the customer back to the Prohibition era, the Central District bar makes a beeline for the bop era, a time when the house band was typically joined by a parade of guest musicians, and the music endured long into the night. The Hat is unique to the scene in that it is solely a vehicle for jam sessions. There are no formal shows; musicians simply show up and play until early in the morning. (One reason for The Hat’s late-night jams has nothing to do with music: The Neva River snakes through the city, and at night, the bridges rise to let shipping industry barges pass through. “When they open the bridges, you cannot go home,” saxophonist Azat Bayazitov explains, smiling. “The musicians play until 5am, when they put the bridges back down.”)

And while The Hat is a local hang, there’s no telling who will step up on stage. “All of the jazz stars who come to St. Pete, they usually take them there right after the concert,” Malich explains. “And they play with the local musicians.” One visitor in particular who made an impression was Robert Glasper. On drums. The pianist was in town when St. Petersburg was host to the 2018 International Jazz Day, and he swung by the after-hours joint to jam.

“I lived at The Hat,” explains vocalist Kristina Kovalyova. “I’d spend the whole night singing with all the musicians and never stop.” At the time, she was feeling wistful. “I had this homesickness,” she says. “I was listening to Ukrainian folk songs and remembering how my family would sing these lullabies and tell stories, and I realized, some part of me is in there.” She crafted jazz arrangements of the music of her childhood, and it was in the welcoming environment of The Hat where she had the confidence to give them a spin. “The people in the Hat Bar were so open to the music, so involved,” she says, leaning forward to mimic the engagement of the audience. “I felt like I could trust The Hat’s audience. I could share something sacred to me.” The boost of confidence led to the creation of her debut recording, Христя в Намистi.

On the other end of the spectrum, Social Club is a posh restaurant with plenty of exposed brick and art deco flair, with dining on one side and a stage on the other. Located in the Five Corners neighborhood, and situated at the head of Rubinstein Street, it informally signifies the entrance to the primary thoroughfare of bars. Under normal conditions, Social Club represents something special for the musicians. “This is a place where people can encounter the unexpected,” Mashin explains, “Where people who don’t care about jazz can meet it for the first time in their lives.” Mashin also appreciates it for more pragmatic reasons. “Acoustically, it’s amazing to play there,” he says of the small stage tucked in next to one of the venue’s multiple bars.

For the Haute Culture video series, Ponomarev performed at Social Club. It was a place he’d visited before, but the date of his performance cast the bar in a new light. “It was after a long break, when we hadn’t played together or seen each other [in person], so it was exciting. The club was empty, and the bar stools were turned up, but it was cool, because this was one of the first things we did after a very long break. It was like an injection of normality—a hint of something coming up that will bring you back to your regular life.”

Ponomarev is one of the more active musicians on the St. Petersburg scene, stringing together gigs at an array of venues that run from proper jazz clubs to neighborhood joints to hotel bars to concert halls and sports stadiums. As a result, the era and style of jazz he plays varies depending on location. That quality is on display on his new recording, Clockwise. Rich harmonics billow out from bold melodic statements, and the rhythm feels like an insistent whisper, urging the songs on. Many of the tracks take a traditional jazz approach, leading with a melodic theme; but Ponomarev advances the piece with parallel trajectories, steering into classical music abstraction or bolstering the songs with light touches of pop.

The album’s release show was held at the The New Stage of the Alexandrinsky Theater, an addition to the established campus of a performance space whose main theater hosts a wide range of artistic productions, notably ballet and opera. But the New Stage offers something different. “It’s been my favorite concert venue for these past few years,” Ponomarev explains. “The space has got a cool, contemporary look. The interior is pure black, very minimalistic, and no distractions from the music.” In addition to cutting-edge technical equipment, the building’s architects paid extra attention to the acoustics, opening up a wide range of possibilities to suit different kinds of music. That made it the perfect location for Makar Kashitsyn‘s 2020 release Jazz Animals (Live at the New Stage), marking the alto saxophonist’s stellar introduction. The venue’s flexibility was also proven when it hosted the genre-defying ensemble Kubikmaggi, the quartet of pianist Ksenia Fedorova, bassist Max Roudenko, percussionist Ilya Varfolomeev, and saxophonist Alexander Timofeev, for the release show for their latest record, Things, an album that merges folk, chamber music, and modern rock with contemporary jazz.

St. Petersburg is known as the bar and café capital of Russia, and its local joints are designed to reflect the heart of the neighborhood. Situated just down from the Lion Bridge and steps from the world-famous Mariinsky opera house, The Garage is a local’s destination in an area where the tourists flock. The bay doors that give the venue its name provided a welcoming view of the Kolomna District during Azat Bayazitov’s performance for Haute Culture. In that video, Bayazitov performed several tracks from his latest recording, The Doors Are Open. The influence of Joe Henderson is obvious in the way the two tenor saxophonists deliver melodies that feel like sunbeams: just as capable of soothing warmth as they are at fiercely burning.

The city is also home to a few oddball locations that are unlikely homes for live music. Evgeny Ponomarev’s jazz series at Estonian Cultural Center Jaani Kirik is one of those. “It was a nice surprise when I got in there and viewed it as a concert venue. They have two beautiful pianos, a Steinway and an Estonia,” says Ponomarev. For those shows, he led a house trio, and invited guest vocalists and wind instrumentalists to sit in for themed performances built around the compositions of jazz greats. Crowds are treated to the music of Duke Ellington, Ella Fitzgerald, and Louis Armstrong, as interpreted by Ponomarev. “Even though it’s a church, it’s fairly laid-back in terms of the live music. You don’t feel like you’re going to hell if you play Mingus,” he laughs.

The city has other surprises, too. Take, for example, a piano workshop led by Victor Golovchenko situated somewhere behind the Narvskaya Station on the Kirovsko-Vyborgskaya subway line—a space that was unfamiliar even to veterans of the scene. Malich described its remote location as being, “in the backyard of the backyard of St. Petersburg.” Surprise at the workshop’s existence is dwarfed by the shock of the grand piano residing within. “It had just been repaired,” pianist Evgeny Sivtsov explains. “It felt like it was brand new.” That piano gave a resonant voice to the melody of “Post-Wild,” a track from his 2019 release, Zoo. It’s a modern piano trio recording that illustrates that the traditional sounds of jazz are no less sublime when given a fresh voice in the modern age.