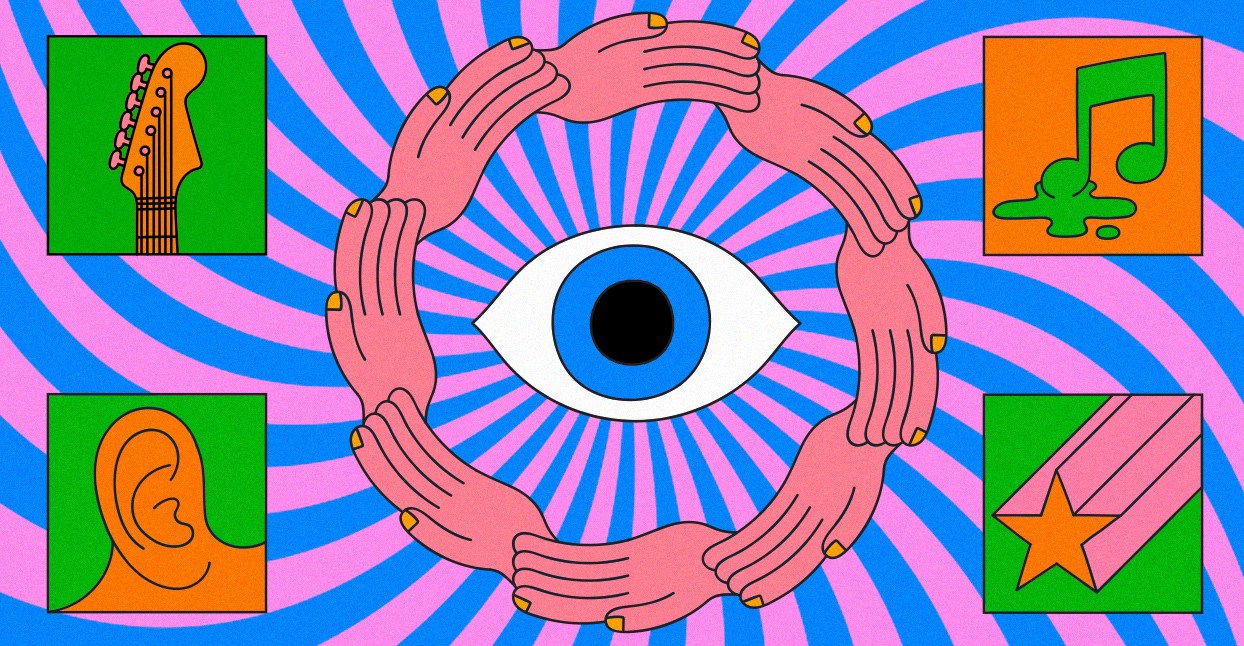 If the artists in this list are any indication, then the country that gave the world Picasso, Goya, and Dali is certainly capable of producing similarly surreal music. Still, whether due to Franco-ist repression in the ‘60s and ‘70s, the mild language barrier, or economic limitations, Spanish psych bands haven’t yet managed to net significant attention outside their home country. It’s time for that to change.

Like their European neighbors in France and Italy, a number of groups from the Iberian Peninsula have put put their own mind-bending stamp on psychedelic rock, whether by combining it with native musical styles, or just playing it really damn well. Some of them sing in Spanish, some in English; some don’t sing at all. They cover the spectrum from flower-power throwbacks to shoegazers to future-looking krautrock hybrids. Here’s a selection of the best.

The name Acid Mess implies a lack of control—drug-fueled insanity breaking out in free-noise bursts. But that visual is worlds removed from the tight control exercised by this instrumental trio from the northern province of Oviedo. Despite the free-flowing nature of their extended heavy psych exercises, they actually take the listener along a carefully-plotted course, one that, at times, echoes early ‘70s Pink Floyd (especially on “Alquimia”). A little woozy desert rock, a few experiments with the occult, a case of the summertime blues—Acid Mess delivers a good time without the aid of mind-altering substances.

Cachemira is the Spanish word for “Kashmir,” and it seems more likely that this trio from Barcelona is talking about the Zep epic, not the region in India. Their fuzzed-out jams recall Earthless’ cosmic blues, with singer Gaston Lainé approaching the same disaffected tone as Masters of Reality’s Chris Goss. I don’t know the Spanish word for “self-restraint,” but it seems like they don’t, either; Jungla’s five songs feel chaotic in the best way. The guitar, bass, and drums clash against each other until coherent tunes form, but the results will fill your dreams with stars.

Recorded in Austin, Texas and produced by Kyle Hunt of The Black Angels, Celestial Bums’ second full-length, Ascend, delivers the neo-psych goods. These Barcelonans draw inspiration from the alternative spaceflights of Failure, the perfect prescriptions of Spacemen 3, and the feedback sculptures of the Jesus and Mary Chain. The laid-back, dreamy nature of the recording makes it easy to lose yourself in the swirling guitars and abstract imagery. They use their wall of effects pedals to build a stairway to the stars.

Like Ride and Swervedriver, Celica XX (named after a high-powered Japanese sports coupe) use their effects pedals like accelerators, tires squealing as they drift into the darkness of shoegaze. While these Madrid natives ramp up to some pretty high RPMs, Ultraviolencia is no joyride. The smoke from their tailpipe obscures the sun; even the mellower tunes exude a sense of melancholy. Still, it would be inaccurate to say that Ultraviolencia is a bummer—sometimes, a long and eerie night drive can be just the thing you need.

According to Frank Herbert’s classic sci-fi novel Dune, he who controls the spice controls the universe. The name of that spice? Melange. Not only does this confederation of musicians from Madrid-based luminaries like RIP KC and Luger control the spice, they are the spice. Their second full-length plays with every flavor of prog psych, from Jethro Tull pagan dance parties to Hawkwind brainstorms to Doors organ freak-outs—occasionally all at the same time. Retro-minded, certainly, but with their expertise at combining a host of disparate influences, the resulting dish is sublime.

If you like your psych rock like you like your coffee, and you like your coffee Turkish, Mediterranean experimentalists Mohama Saz have the perfect blend for you. Although based in Madrid, the music of this quartet music isn’t limited by geography or genre. A bevy of guest musicians help them paint gorgeous desert vistas on top of a base of mellow acid folk, taking the listener on a trip to the romantic Middle East of the Arabian Nights. By adding trembling Arabic singing and Mediterranean instruments like the bouzouki to their ’60s-style rock structures, they seamlessly meld musical traditions both ancient and new.

Clearly devotees of Maserati’s kraut-driven post-rock, Muñeco use the sounds of the past to launch themselves into the future. The propulsive motorik beats, urgent jangling guitar, and pulsating electronics blend together seamlessly, making for a riveting listen. Despite being mostly instrumental (there’s some robot voice), they use repetition to provide subtle emotional cues. But that doesn’t mean the music here is one-note—Muñeco know when to apply the thrusters to the rolling beat, and when to dial back and apply subtle tension-release guitar, taking listeners on a trip from Barcelona to the furthest reaches of the galaxy.

Due to its proximity to the Mediterranean and the northern tip of Africa, Seville has been occupied over the years by many nearby civilizations, from the Romans to the Moors. Quentin Gas & Los Zíngaros have absorbed that diverse cultural history (in addition to their own musical influences, like Pink Floyd and Tama Impala). Caravana’s very name invokes a journey through the desert. Along the way, they travel across the Strait of Gibraltar to Morocco for a taste of its Andalusian classical music, jet to Italy for some Morricone-esque surf guitar, and come right back home for the flamenco rhythms. These foreign spices add welcome zing to the familiar flavors.

Despite hailing from Málaga, a beautiful city just off the Mediterranean, Sagan seem much more interested on taking a trip on a rocketship than a sailboat. Of course, their album’s pulpy cover art, with its decapitated astronaut, shows why that might be a dangerous proposition. With songs that take their names from cosmonauts, satellites, and famous sci-fi movies, it doesn’t take much imagination to figure out what they’re about. These heavy space rock jams have a raw, live-in-the-studio feel that keeps the music grounded without ever dragging it back to earth.

The Balearic island of Mallorca is one of Spain’s prime vacation spots. It’s also the home of The Wheels, and that sunny locale informs their similarly sunny disposition. Fusing together The Beatles, T. Rex, and The Flaming Lips, The Wheels’ version of psych comes with a cheeky glam edge and a strong pop sensibility. The brightness of their approach keeps them from simply sounding derivative. Even when it comes across as pastiche, The Year of the Monkey is too much fun to dislike.