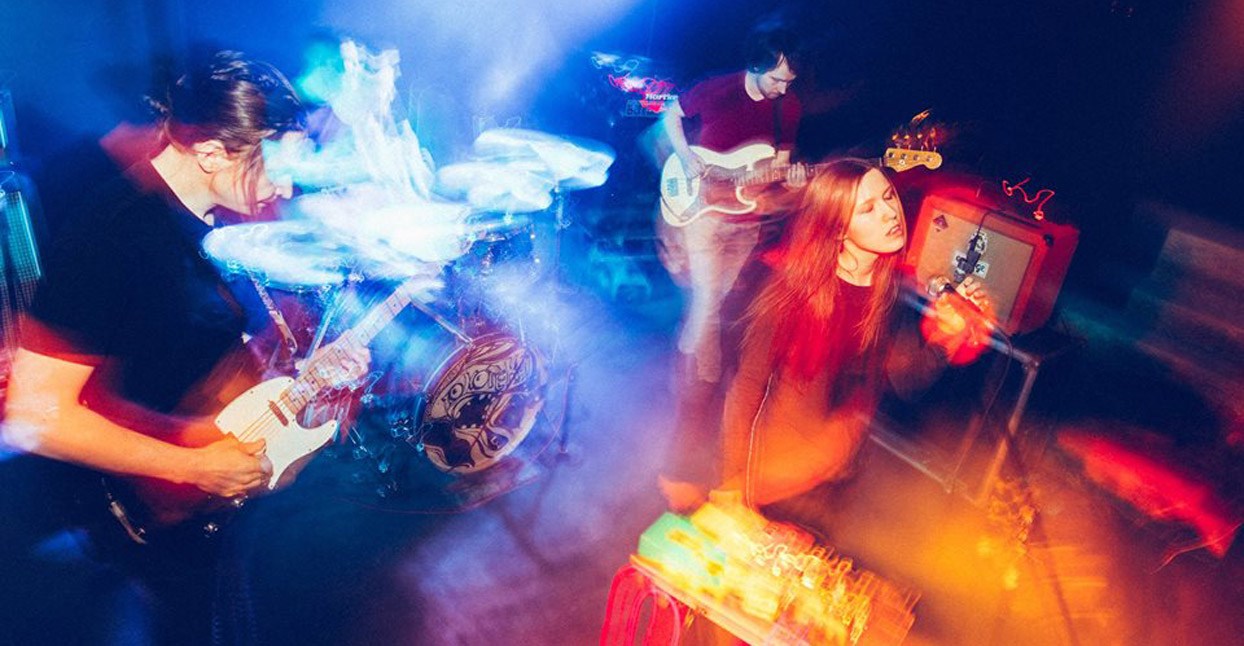 With his tongue perhaps buried in his cheek, Andrey Portnykh of Samara, Russia’s Your Friends Polymers offers this when asked why the country’s shoegaze bands haven’t netted more international attention: “It’s a common fact that foreign people gaze at their shoes more carefully, while Russians mainly read Dostoevsky and attend ballet.”

Portnykh may be joking, but conversations with other bands in the scene indicate the truth may not be far off. “I think Russian people like to hear words in music,” says Yana Guselnikova, vocalist for St. Petersburg’s Blankenberge. “When my friends and relatives hear our music, they say, ‘Why is your voice so quiet and the music so loud?’”

Russian shoegaze began in much the same way it did elsewhere in the world; in the ‘90s, earnest bands like Moscow’s Plastica and Novosibirsk’s Hot Zex made a respectable but decidedly small-scale impact. The genre found greater popularity in the 21st century, with St. Petersburg’s Pinkshinyultrablast gaining a dedicated international audience, and groups like Rostov-on-Don’s AEROFALL and Perm’s Gnoomes following close behind. At the same time, a clutch of newer acts are also making inroads into the country’s DIY scene.

“The youth of Russia began to create music in absolutely different styles, but at the same time remaining in the underground,” AEROFALL’s singer and co-lead guitarist Yana Komeshko says. “With the advent of social networks, and the opportunity to share information, developing your musical taste has become easier and more fun.”

Since shoegaze’s appeal often lies in the way it de-emphasizes language, concentrating on the free-floating sound of the voice more than what’s being said, the groups aren’t boxed into singing in a specific dialect. “In Russian, there are sounds which are very percussive,” says Sasha Piankov of Gnoomes, demonstrating with some brusque consonants and combinations. “In shoegaze music, you can emit ‘o’ and ‘a’ sounds, like [you would if you were singing] in English.”

Here are eight Russian shoegaze bands to get you started.

Named after an album by cult American shoegazer act Astrobrite, Pinkshinyultrablast’s charms don’t take long to make themselves apparent. One listen to 2009’s “Blaster,” with its feedback wash and clean, soaring guitar lines encircling the lovely vocals of Lyubov, makes it clear why the group has gained popularity in recent years, building up to last year’s breakout Miserable Miracles.

AEROFALL’s two strongest releases, a 2014 self-titled effort and 2017’s Forms, showcase the band’s interest in a thick, murky sound, with melodies carried almost as much by the rhythm section as via Yana Komeshko’s understated singing. Both Komeshko and fellow guitarist Vladimir Karpov kick up a swirling din on their instruments, creating a rich tension that forces the listener to focus in further on the layers of sound. “The presence of a large number of pedals, as well as their absence, does not play a major role in style and music in general,” says Komeshko. “The important point is how deep the music lives inside you.”

Founded in 2016, Blankenberge have an ear for miniature epics. Their deft employment of tempo shifts and unexpected twists in arrangements results in songs that are surprisingly complex, with expansive dynamic range. Naturally, there’s as much surging feedback and striking singing as anyone could want. “I like when I don’t understand what the lyrics are about. For me, the voice is just like another instrument,” says vocalist Yana Guselnikova. “I think this is the reason I like all rock music, not only shoegaze—because lyrics can be not so important as melody and music.”

Gnoomes’ reputation has been rapidly growing thanks to 2017’s Tschak! and this year’s MU!, both powerful albums full of psych/electronic fusions. The band freely cite shoegaze as their initial inspiration, and early releases, like 2014’s It’s moonbow-time, boy, are awash in gently-lapping waves of guitar and distant, mournful vocals. “We were big fans of that particular genre for a long time, since we were kids,” says keyboardist Masha Piankova. “We weren’t able to go see bands play live, so we got all our info from the Internet. When we started as a new band, we called ourselves shoegaze—not even shoegaze: Stargaze!”

Your Friends Polymers write brisk, peppy, distortion-rich songs that will be familiar to any fans of ‘90s indiepop. The swooning guitar textures and Alexandra Zagaynova’s singing, reminiscent of Lush’s Miki Berenyi, keeps the sound rich and beautiful—but also ear-clattering and harsh. As guitarist Andrey Portnykh happily and intently says, “We like to sound loud. Very loud. As loud as possible.”  Accordingly, their songs drown heavily-reverbed vocals in dense washes of guitar, often propelled by skittish, danceable rhythms.

Another relatively young band—they started recording in 2016—Moscow’s Life on Venus fully embrace a melancholy moodiness, serving as a reminder of how foundational shoegaze bands like Slowdive were always more than a little indebted to post-punk. The quintet fully acknowledges the comparison, and the blended vocals of Dima and Lisa, coupled with the shadowy minor-key guitar, keep the band hovering in the middle ground between shoegaze and goth. Their most recent EP, Departure, opens with “What Lies Beneath,” a deep, lovely sigh of a song in which Dima’s vocals are delivered with calm restraint, as the guitars churn and peal in the background.

From Ufa, акульи слёзы—Sharks Tears—have rapidly amassed a local reputation after the release of their debut EP last year. Its songs showcase a slow, dreamy, electronically-textured style perfectly suited for the roadhouse concert scenes in Twin Peaks: The Return. Initially a trio and now a quartet, the band also stand out for recording entirely in Russian. Their latest release, Опыт очарования | Experience of the charm, lists its song titles in English as well, but as with much shoegaze, the draw is in the way the words sound, not necessarily what they mean.