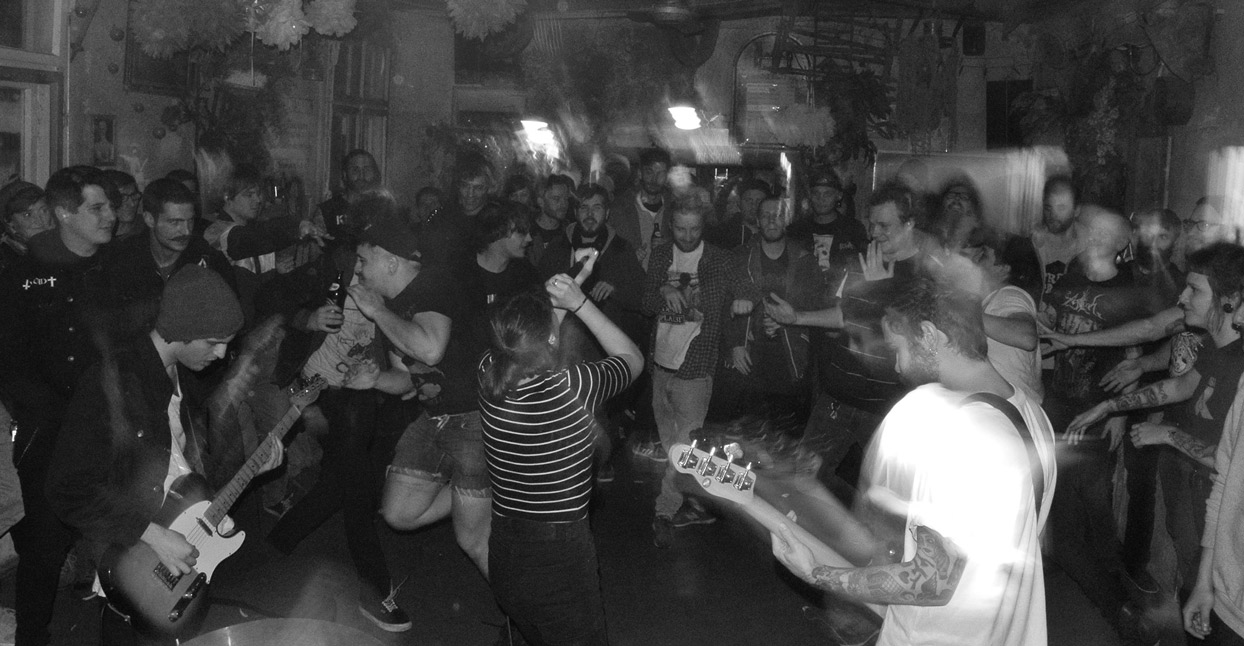 It’s a hot summer Sunday in Milan, the second biggest city in Italy. Looking for fresh air, tourists walk along the canals of the Navigli neighborhood, stopping by the stalls that fill the alleys. But there’s an unusual clatter cutting through the sultry air of the afternoon that catches their attention: the reverberation of fast drums and distorted guitars coming from a public park nearby, behind a big building that used to be a squat. Those who venture over to see what’s going on are confused by the sight: a band is playing raw and abrasive music under the trees, with a few hundred people dancing around them, sitting on the grass or selling drinks and food under a small portico nearby.

It wouldn’t be easy to explain the deep meaning and importance of what’s happening to a passerby. The show in the park is not only an unauthorized event—its exact location posted on Facebook just two hours before the first band started playing—but it’s also the last act of a much wider event called “Le 5 Giornate DIY di Milano,” or the “Five DIY Days Of Milan.” 2017 is the third year the festival has taken place. It’s a celebration of the hardcore punk scene of the city, of its many collectives, its bands, DIY spaces and squats—a self-managed universe revolving around music and activism.

“It almost started out as a joke,” explains Pamela, who is one of the organizers of the event and plays bass in Agatha and The Smudjas. “In the summer of 2015, we realized there were four shows booked on the same week and we thought, ‘Let’s turn it into an actual festival.’ So we organized a fifth show and called it the Five DIY Days of Milan, five days of shows and debates, every day in a different squat and booked by a different collective of the city, with all the money we earn being donated to causes we care about,” she says.

The event offers not just a chance to see bands from Italy and abroad (this year’s highlights included Lebenden Toten from Portland, Affranti from Savona, and Loscos’ Brigade from Lecce), it’s also a way to showcase the network of squatted spaces that are active all year round, each of them with its own history and character.

There’s Villa Vegan, a squatted mansion surrounded by a large wooded garden and a DIY bike repair place; COA T28, which also hosts its own clinic offering health assistance to those in need; Cascina Torchiera Senzacqua, a historical farmhouse in front of the main cemetery of the city; and FOA Boccaccio, a former sports field in Monza, near Milan, which was abandoned after the soccer team that played there went bankrupt. “The attitude of the five days is connected to a common fight against racism, fascism, sexism, and speciesism, so it’s quite natural that all the shows take place in venues that share the same views with us,” says Pamela.

It’s in these spaces that shows happen throughout the year, thanks to the shared efforts of several collectives. Pamela herself is part of Queens Of Chaos, a feminist group that conducts many LGBTQ-related initiatives in addition to organizing the angriest hardcore bands around. There’s also Knife Shows, a group that books international powerviolence and punk bands in packed venues, and Occult Punk Gang, a younger group with well-defined aesthetics and an obsession with labels such as La Vida Es Un Mus or Static Shock. But most importantly, these collectives—and many more—constantly work together, helping each other choose the right venue, prepare the dinner for the bands or find them a place to sleep. “In the end everything is mixed,” adds Pamela. “The organizers become the crowd, the bands become the organizers, and so on.”

To emphasize the importance that local bands have for the survival of the scene, the organizers of the five DIY days have released a compilation that was distributed at the entrance of each of the five shows. It contains many of the active punk bands coming from Milan and its metropolitan area, and it’s an interesting and varied mix: from the furious hardcore of L.UL.U. and the Oi! of Sempre Peggio to the romantic punk of Kalashnikov Collective and the emocore of CoXtola.

What these bands share is the urge to transfer their activism into their music while sounding as personal and unique as possible, hovering between the Italian hardcore scene of the ’80s—bands like Negazione and Wretched are still the starting point for most punks here—and the variety of influences coming from the rest of the world. They’re the tangible and exportable evidence of a scene that is truly alive in 2017, and that encapsulates the urgency that’s made punk and hardcore so meaningful since the beginning.

Sesto San Giovanni is a former industrial city bordering Milan on the north, once the symbol of the working-class resistance to fascism, now the emblem of multiculturalism in the area. The Seeker, a hardcore band based here, are a vivid example of the mix of cultures happening between abandoned factories and housing projects. Over the past five years, the band has been changing members, but it keeps revolving around guitar player Michael Dee, who came from the Philippines 18 years ago. Since their first record in 2013, The Seeker have been shifting from a Modern Life Is War kind of melodic hardcore to a blatantly fast take on hardcore punk with nods to powerviolence. Their last record, Malaya (“Free” in Tagalog), is a raging and gloriously ill-mannered album about marginalization and alienation, with an aggressive will for revenge that permeates its short, hammering songs.

Together with bands like Sport from France or Wild Animals from Spain, The Smudjas can be easily recognized as the flag-bearers of the ’90s emo and pop-punk revival in Europe, a genre that is one of the most appreciated at the hottest DIY summer festivals —especially by those who are quick to replace their black jeans with colorful shorts and slippers. The sound of the trio is fun but elegantly executed, borrowing here and there from classic bands like Jawbreaker or Lifetime while also being influenced by Floral Green-era Title Fight and other recent acts. But it’s more emotional than it is derivative, with the band bringing their own personal stories to the table.

Over the past year, Kalashnikov Collective have started their own radio show, recorded the soundtrack for a radio play about partisans, and released a new record called Romantic Punk. This DIY band has existed since 1996 and that has released more than 10 records, and played hundreds of shows—including a tour in Siberia—under their belt. “Romantic punk” is also the way they have always described their music; epic guitar lines twirl over danceable post-punk rhythms. Through the years, their sound’s gotten darker and more influenced by the ’80s, but on Romantic Punk they manage to brilliantly bring in styles from throughout their discography, from the anarcho fairy tales of their foundation to the post-apocalyptic atmospheres that followed.

One of the best performances at the park show came from Council of Rats. The band has been playing together for five years, offering fast and dark hardcore resembling acts like Dangers and even Cursed. This sound reached a new peak on their latest album Coarse, a piercing and heavy work that is surprisingly fluent and consistent. At the show, their singer wriggles on the grass while wearing a rat mask, but it’s an act that is not facetious, nor does it undercut the tension of the powerful guitar riffs of the four-piece, sustained by an impeccable rhythmic section. Instead, it enhances the explosiveness of that tension, making it more visual and real: it gives a face to the fears that dominate the band’s imagery.

Cerimonia Secreta are probably the best new band in Milan. During their live shows, fog from a smoke machine fills the air, getting thicker and thicker until the band members eventually disappear. A similar effect happens on their debut album, Da Sempre: the beautiful lyrics in Italian describe a deliberately uncouth attempt to rediscover a lost self, which eventually becomes a blurry journey filled with doubts and confusion. The musical counterpart for this is a primitive form of post-punk, a plangent and distorted roar that never loses itself fully to noise but remains constantly interesting. Unusual instruments—a saxophone and a theremin—prove functional to the band’s aesthetic.

Class’ repertoire lasts less than 12 minutes: that’s the length of their only record, Asterism, comprised of 12 thundering tracks. None of those minutes are wasted though; this is ferocious hardcore punk, its efficiency benefiting from the experience of the band’s members, who were previously in groups like Holy and Abel Is Dying. Class’ are pretty obvious, from early Ceremony to Punch—rapturous vocals over ridiculously fast hardcore patterns, with sharp lyrics that elevate their entire oeuvre.