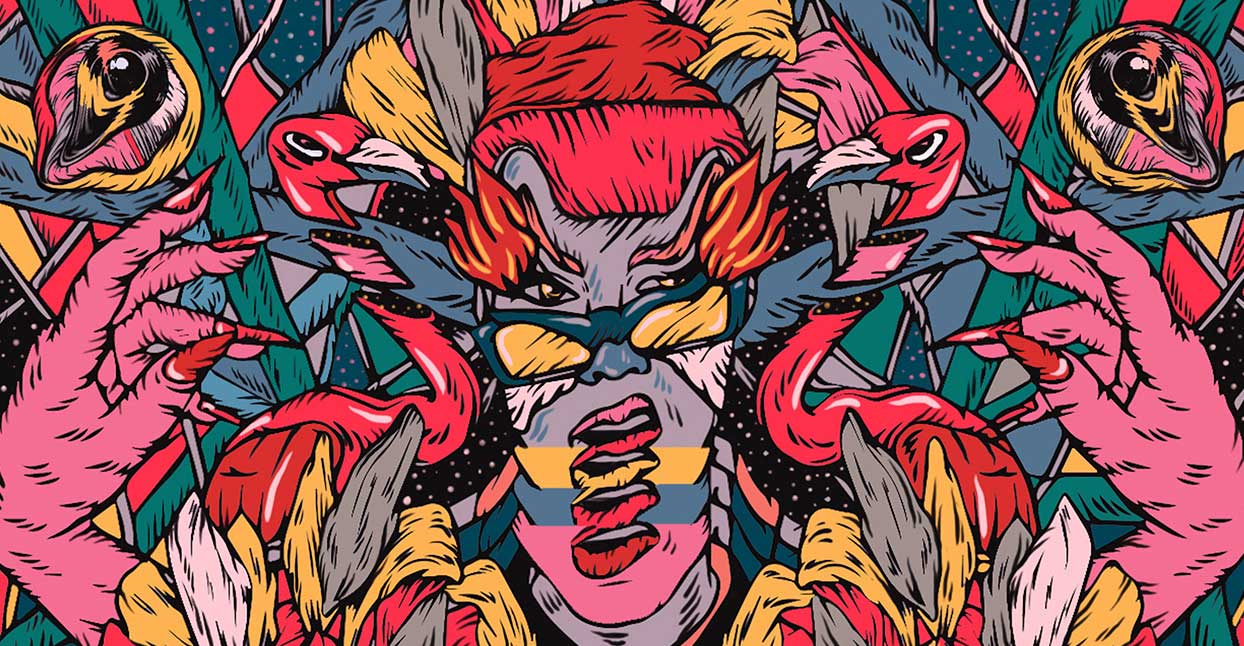 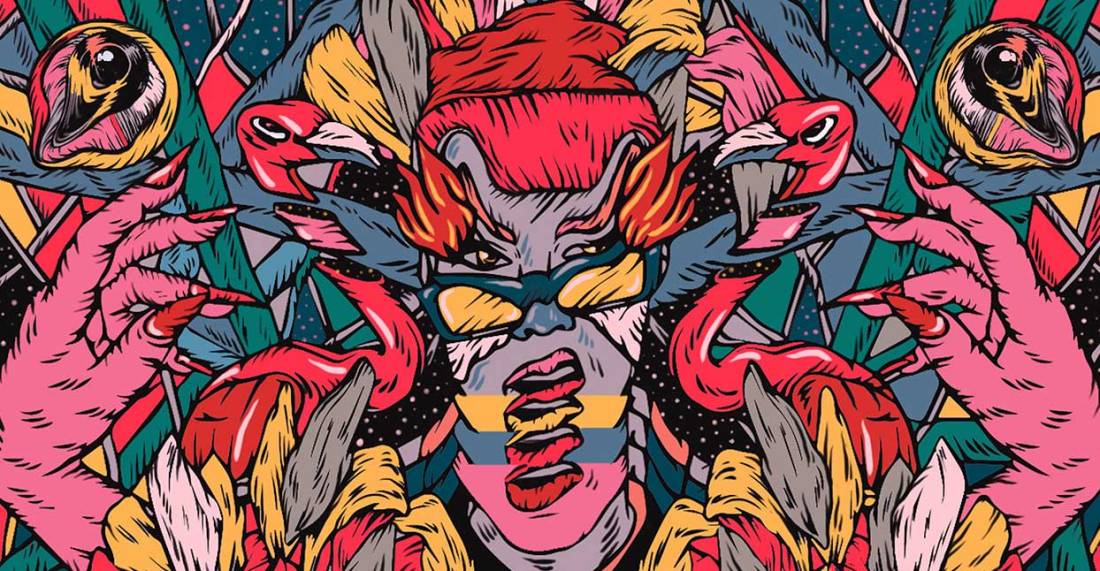 When people think of Miami, they might think of paradise: a postcard-perfect city synonymous with year-round warmth, beautiful beaches, sun-baked Art Deco buildings, and towering palm trees. And yet, deep within this blissful, balmy setting lies an unlikely—and surprisingly strong—undercurrent, one that’s rushing in the opposite direction. We’ve explored the wider Miami underground before, but here, we focus on Miami’s sludge-doom scene: a small, devoted circle of bands who inject the genre’s rugged, low-and-slow approach with Caribbean grooves and unkempt energy.

“For me, the Miami sludge-doom style is a little more grungy: screaming vocals, a little more aggressive, heavier, and slower in a more extreme kind of way than the traditional doom,” explains Rick Smith, Torche drummer and one of the scene’s most respected figures. He traces the sound back to the ’90s, with the rise of local metal bands like Cavity and Floor.

Miami’s take on doom and sludge is, some musicians think, a natural reaction to the often harsh reality of living in a city widely thought of as a vacation destination. “The angst of the city is reflected in the music,” offers Ryan Rivas, bassist of Bleeth. “[Between] the outrageous housing situation and cost of living, it is definitely difficult to be a band in this city.” And then there’s the weather: “The heat brings more frustration—imagine being stuck in traffic with no AC in your car.”

The end result is a defiant, anything-goes spirit, and by extension, a distinct sound. “I feel that bands that come out of Florida—and this doesn’t necessarily apply to just doom or sludge—have a more creative spin on metal or heavy music in general,” explains Ryan Haft, a Miami-based recording and live sound engineer and musician, who has worked with bands like Red Fang, Wolves in the Throne Room, and Big Business. “There is not much pressure over here because we are kind of isolated. There is a desire to be free in the way of approaching heavy music.” He adds that the city’s longstanding ties to Afro-Cuban and other forms of Latin music play important roles, as well: “I think the people who grew up around here are exposed to adventurous rhythmic stuff that also influences the way people approach music.”

Before getting deep into the bands that represent Miami’s doom and sludge scene, a few notes. First, because Miami’s metal scene, in general, is more about going to shows than recording albums, many of the bands mentioned below boast active touring schedules, but limited discographies. Second, what you are about to hear is not for purists; Miami bands skew more eclectic and adventurous than most, with a tendency to play beyond boundaries. Third, and most importantly, you’ve got to play ‘em loud.

Drummer Beatriz Monteavaro, a founding member of Floor, and guitarist Gavin Perry have mastered the art of driving the audience into a trance. Utilizing repetitive yet progressive melodies, the duo create hypnotic songs with heavy, low riffs and classic Miami groove, represented here with Monteavaro’s enigmatic, Caribbean-flavored drumming style. “Meano,” from the Prometheus EP which was recorded by Jonathan Nuñez of Torche, is the perfect example of how a two-piece can craft such a rich sound, with its clever combination of melodic assertiveness and blues-inspired, extra-heavy riffs.

Torche is an institution of the South Florida metal scene, with over 15 years under their belts. After Floor dissolved, guitarists Steve Brooks and Juan Montoya teamed up with Jonathan Nuñez and Rick Smith to found a new powerhouse upholding the legacy of the iconic band and developing it further. (Montoya left the band in 2008.) Raw, thick, progressive, and ambitious, Torche’s sound is pure Florida, but they’ve won tons of fans outside the region; they’ve toured with notables like High on Fire, Mogwai, ISIS, and more. Their second album on Relapse Records will be out later this year; until then, we’ll have to make do with 2015’s caustic, catchy Restarter, which plays out like a swampy mix of Foo Fighters and Fu Manchu.

Absolver play a sinister mix of doom, noise, and black metal, with hints of industrial, ambient, and experimental textures. The band have kept a regular release schedule over the past two years, dropping a pair of sharp, no-nonsense EPs; their third arrives later this year. Songs like “I” and “Ashen Ritual” feature groovy-yet-gloomy guitar riffs, guttural vocals, and somber synths. According to founding member Christopher Lombardo, Absolver want listeners to experience “full cerebral dread” while listening to their music.

Lauded by Metal Injection as “one of the country’s best modern sludge/doom bands,” Shroud Eater are another one of Miami’s most successful heavy-music exports; their live resume includes tours with High on Fire, Kylesa, and Iron Reagan. The dynamic duo of guitarist Jean Saiz and bassist Janette Valentine (who split vocal duties) lead the charge; their deep rumbles and pulsing riffs are accentuated by Davin Sosa’s fervent drumming. Voyage into their discography and you’ll come across several stylistic surprises, ranging from bursts of harsh, industrial textures à la Black Mass, to sinewy, Joy Division-esque post-punk. The band might technically be on hiatus, but they’ve had a clear and profound impact on the contemporary scene.

Although still a young power trio, Bleeth’s sound is already massive, full of angst and virtuosity. They provide us with yet another example of the true Miami contemporary metal sound: heavy bass, guitar riffs that balance complex melodies with foggy atmosphere, and drums with a Latin groove. Their most recent album Geomancer helped establish Bleeth on a national level, with coverage on Decibel, Revolver, Invisible Oranges, and more; they’re currently working on a new album to be released later this year. According to bassist/vocalist Ryan Rivas, the new songs mark “a shift in a new direction”—shorter and faster than records past, with particular emphasis on atypical tunings and arrangements. You’ve been warned.

Imagine driving down some gator-infested backroad on a dark, stormy, humid night, only to have one your tires blown out—and you’ve got no spare. The rage and panic festering while you sit there trapped in the downpour? Crud aim to capture that moment, musically. Originally formed in 2015 as a simple drum/bass duo, they’ve since matured into a rowdy quartet who balance doom’s heaviness with garage rock’s accessibility.
“Sideswiped,” off their debut EP Resin is a good example of Crud’s dirty, deadly sound, as does their recently released single “Alone in Vain,” which combines thick bass tones, ‘70s-inspired guitars, and punishing drums to pulverizing effect.