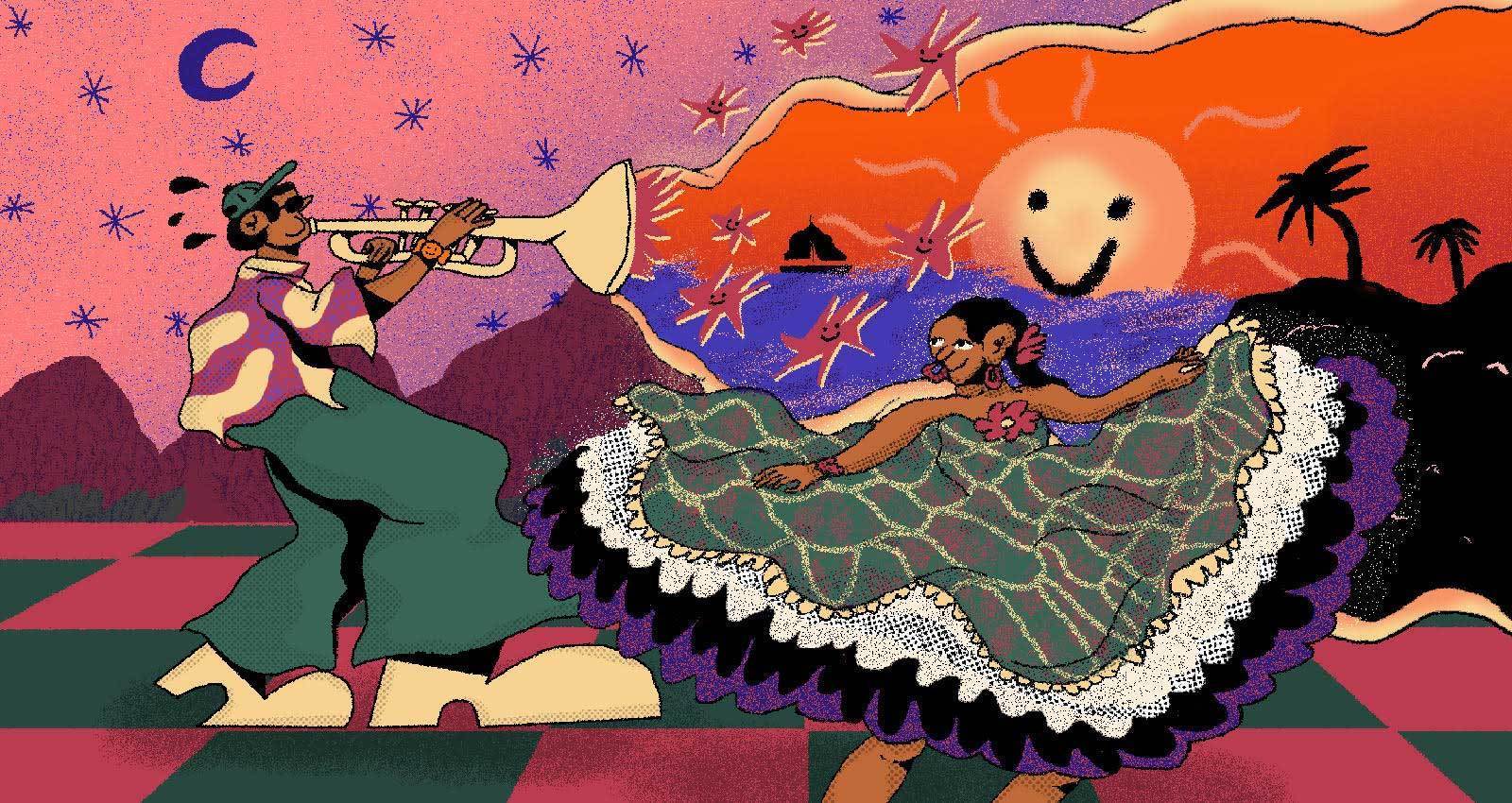 The Caribbean is known for its fertile musical production, born of the encounters between diverse cultures—Indigenous, European, and African—that resulted from the violent Spanish, British, Dutch, and French colonizations of the Americas. That said, French Caribbean popular music is often eclipsed by the enormous popularity and influence of Anglophone Caribbean genres, like Jamaican reggae and dancehall, as well as the widespread impact of Cuban popular music.

French Caribbean pop music still doesn’t enjoy widespread popularity outside of France and Francophone Africa, but its harmonious melodies and rhythmic complexity rival other folk-pop hybrids marketed as “world music,” such as son cubano and Congolese soukous. Haiti, and to a lesser extent the overseas French ancillaries of Martinique and Guadeloupe, have made important contributions to post-1950’s Caribbean popular music.

The most important genre is konpa, which emerged in Haiti in the 1950s and was hugely influential throughout the French Caribbean up through the late 20th century. Its stars were so important in Haiti that one of them, Sweet Micky (Michel Martelly), was elected president after the devastating 2010 earthquake. Another prominent Haitian-born artist—and core member of the ’90s hip hop supergroup The Fugees—Wyclef Jean, featured konpa on his wonderful 2004 album Welcome to Haiti: Creole 101. Nonetheless, konpa owes its largest debt to a non-Haitian musical genre, Dominican merengue.

Yves Joseph, one of the founders of konpa supergroup Tabou Combo, formed in 1968, says, “I know that some of my friends will kill me when they read this but it’s true [that konpa] is a slow version of the Dominican merengue which was brought to our side of the island by a sax player named Angel Vilario…Our local musicians were offended and they decided to create another version of that music adapted to the Haitian culture.”

Joseph’s comment alludes to the historic antagonism between Haiti and the Dominican Republic that dates back to the 19th century, after slaves and free people of color engineered the most successful slave revolt in the history of the Americas, the Haitian Revolution. Haiti invaded and occupied the Eastern half of the island from 1822 to 1844. Sadly, the hostility became racialized (and outright racist) in the 20th century with the mass murder of tens of thousands of Haitian migrants by Dominican dictator Rafael Trujillo. Anti-black racism and anti-Haitian sentiment are still endemic in the Dominican Republic. Nonetheless, cultural exchanges persist.

Beyond merengue, konpa drew on influences from neighboring islands, specifically Cuba, and in later decades came other influences, including American funk and R&B, and Afrobeat. Nemours Jean-Baptiste is credited with inventing konpa in 1955, when he slowed down the merengue rhythm and called it konpa direk (direct rhythm). Like merengue, Jean-Baptiste’s instrumentation features accordion and saxophones, as well as bass, guitar, trumpets, a tanbou (single-headed barrel drum), a graj (metal scraper), and vocals. Song themes include band rivalries, romantic/sexual relationships, and social commentary. Like many Caribbean popular musics, konpa employs a lot of melodic repetition with variation and/or improvisation. Ethnomusicologist and Haitian music scholar Gage Averill refers to konpa’s form as “episodic”: it utilizes a combination of instrumental riff sections and call-and-response sections and doesn’t have much “narrative unity.”

The first decade of konpa was dominated by the “polemik,” or musical war between Jean-Baptiste’s band and the orchestra of Webert Sicot; the two had previously been bandmates. In fact, as Averill states, “Nemours and Sicot realized that the polemik had enormous potential as a symbiotic marketing strategy to increase fan identification and interest in both groups.” Jean-Baptiste’s “Ti Carole,” recorded in 1966, is an example of earlier konpa that sounded similar to merengue: it begins with an exchange of riffs between the saxes and trumpets, common to the Dominican genre. The accordion is the main melodic accompaniment for the vocals, and has a solo around the one minute mark.

Sicot’s “Ambiance Cadence,” recorded in 1979, is much more reminiscent of New York-style Puerto Rican salsa than Dominican merengue, with a keyboard tumbao, or repeated riff, alternating with a trombone counter-riff. This brings to mind the 1970s Fania sound with its prominent trombones. Also common to salsa is the short verse section of “Ambiance Cadence,” with the montuno, or call and response section of the song, making up the majority of the track: the montuno starts around 1:15 and the song is almost six minutes long! Finally, the keyboard solo at the 2:40 mark also recalls New York-style salsa, and is followed by a trombone riff at 3:40 that could have come from a Willie Colón salsa song from the 1970’s.

Notwithstanding the influence of Jean-Baptiste and Sicot, Tabou Combo is the band most associated with konpa. The group recorded the biggest konpa hit of all time in 1975, “New York City,” by which time Tabou Combo had emigrated to the Big Apple; the song was a nostalgic (though, like all konpa, rhythmically infectious) ode to Haiti through the eyes of recent immigrants.

Tabou Combo’s “Gislene” was recorded shortly after the group was founded, in 1969. It opens with a very melodic, high-pitched guitar line with accordion accompaniment. The guitar line calls to mind Congolese soukous, although it’s unlikely Haitians had much contact with Francophone African popular music before the 1970’s. Nonetheless, Joseph says that he was influenced by Congolese music when he worked in the Congo on a UN mission in 1974: “That’s why we also sing in Lingala [a Bantu language spoken in the Congo]. I also think that the constant touring of Haitian bands in Paris for the past 50 years has influenced many guitarists on both sides.”

Tabou Combo’s most recent album, recorded in 2011, demonstrates various Caribbean and African-derived influences, including a tribute to Congolese popular music—“Independence Cha-Cha,” a song originally recorded in 1960 by Le Grand Kallé and his group African Jazz in honor of the Congo’s independence from Belgium. The album’s first song, “Gas Etaw,” opens with a driving, funk-inspired riff and quasi-rapped vocals, and then transitions into a more relaxed konpa beat.

In the ’70s, Haitian popular music was influential throughout the French Caribbean, with bands touring Martinique, Guadeloupe, and other islands. Konpa became an important source of pride for Francophone Afro-Antillean identity throughout the region. Toward the end of the decade, however, its popularity declined and a related genre emerged from Martinique and Guadeloupe: zouk. By the 1980’s, zouk had even overtaken konpa in Haiti, and Haitian musicians started incorporating it into their own styles.

Zouk is a distinctly transnational music, pioneered by many musicians—specifically zouk supergroup Kassav— who resided in Paris. Joseph says, “Some musicians got together in Paris to create their own popular music. They wanted ‘an American version’ of Tabou Combo [and] they called it zouk which means ‘party or ‘fete’ in the local language.”

Zouk is also very much defined by technology, particularly the heavy use of synthesizers. There are two main types of zouk: zouk hard, which is fast and percussive, and zouk love, which is slower with more prominent synthesizer and romantic themes. Many female musicians, particularly singers, have been able to make a name for themselves in zouk.

“Las Palé,” by Guadeloupean girl group Feeling Kréyol, was recorded in 1988. The dominance of synthesizers and drum machines here, rather than live instruments, exemplifies the technologically dependent zouk sound.

Martinican-born zouk chanteuse Perle Lama is featured on the zouk-rap hybrid “Evazion,” in which the influence of Jamaican dancehall is audible.

“Ce Ta Ou,” recorded in 1986 by Raphaël Toiné and recently re-released by Madrid-based indie label Glossy Mistakes, appears on an eclectic album that weaves together zouk, funk, and reggae. It’s one of the more zouk-heavy tracks, featuring prominent synth chords and bass riffs backing up high-pitched vocals. At the 1:20 mark the zouk sound really kicks in, with a danceable call-and-response section starting around 1:50.

As should be evident in these konpa and zouk tracks, French Caribbean popular music is a rich, hybrid tradition that has relied on creatively appropriating foreign genres—whether Dominican, American, Cuban/Latin, or African—and localizing them. This is the beauty of Caribbean cultural forms: their openness to different influences and musicians’ ingenuity in mixing them together to create new sounds—ones that you can’t help but dance to.