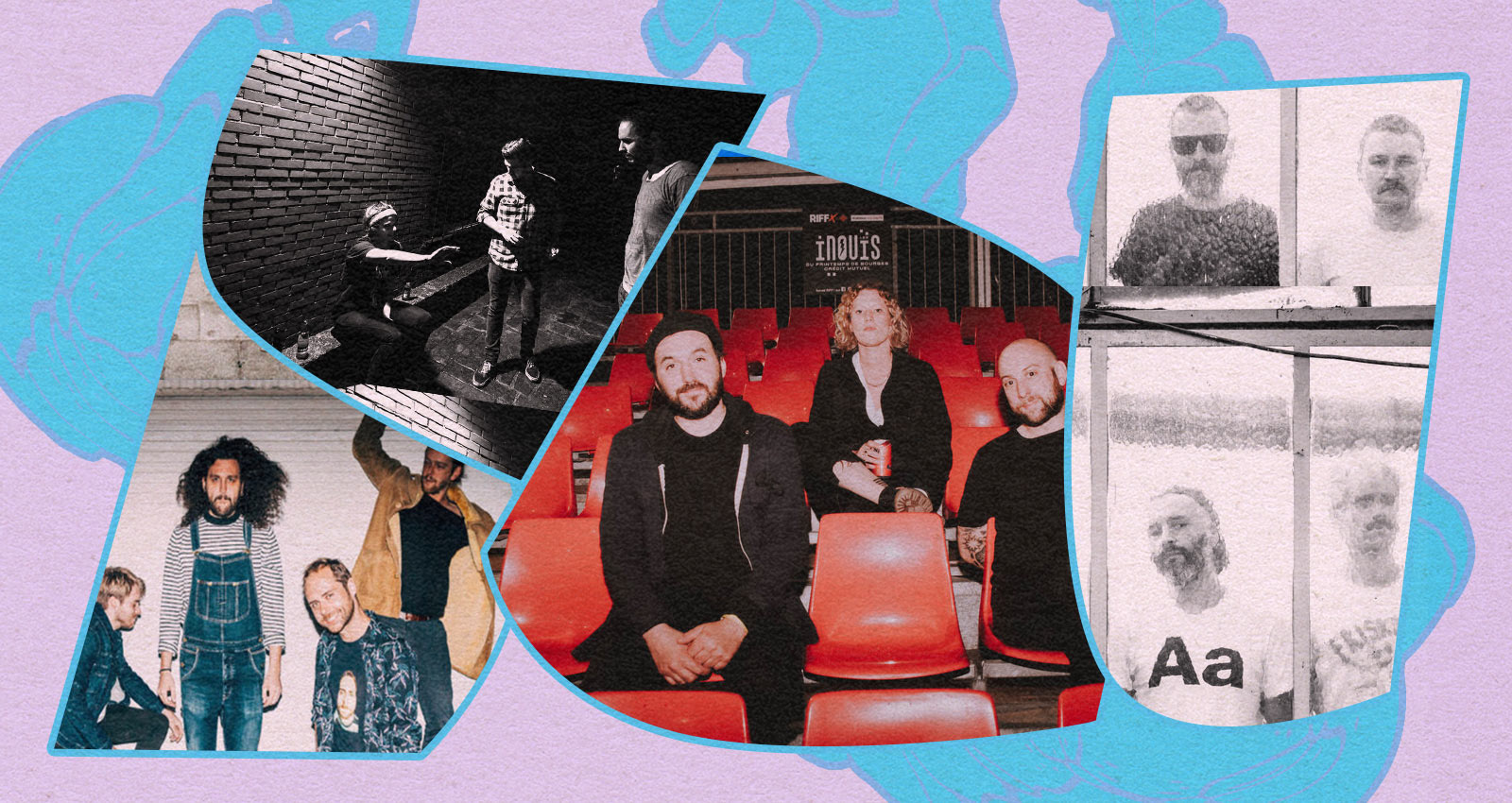 The population of Belgium is one-sixth that of the UK, and it covers an area that, in total mileage, is about the size of the state of Maryland, but when it comes to arts and culture, the European country is easily punching above its weight.

“Belgium may be a small country, but there is a very rich and lively music scene.” says Kobe Linjen, guitarist for the post-punk quartet Whispering Sons. “There are a lot of venues and festivals all over the country, all year long. We were exposed to this culture from a very young age, going to our first concerts in the Ancienne Belgique in Brussels or to Pukkelpop, which was basically in our backyard. It’s through this early immersion in music, and going to shows so frequently, that we got inspired to do something of our own.”

Audrey Marot, vocalist and guitarist for garage rock four-piece Annabel Lee, shares Linjen’s enthusiasm for the country’s bustling music scene. “Despite the fact Belgium is a pretty small country, the amount of quality independent bands is impressive,” she says. “There are also a lot of festivals during the summer, which is an easy way for the scene to develop. But in another way, due to a lack of representation in traditional media, the Belgian bands had to [learn to] be more independent than the bands in countries around us.”

Belgian rock music in its various forms has been around since the 1960s, with popular acts including Adam’s Recital and The Snap Shots. When alt-rock became a worldwide phenomenon in the ’90s, the artists in the scene followed suit, and began exploring new sounds. Bands like dEUS, the first Belgian indie act to sign to a major international label, drew on everything from jazz to punk, and their willingness to experiment established a template for other local bands to follow.

Like most countries, Belgium is still grappling with the effects of the pandemic, and the absence of live shows has robbed the scene of a crucial artistic compass. “The alternative scene lives through its live shows, and when those are not there, it’s hard to see what’s happening around you,” says Linjen. “A lot of bands are struggling; some have even stopped making music altogether. We hope that newer, younger bands can start playing live again soon. Because what better way to discover new music by seeing a great show? Belgium is also a really supportive country when it comes to new bands—there are a lot of opportunities that can help young artists take their next steps.”

For now, Belgium’s contemporary scene continues to be a source of pride at home and fascination from abroad. From post-rock to indie-punk, here are nine acts worthy of your attention.

Though they formed in Leuven in 2013, Whispering Sons moved to Brussels several years late, unable to tolerate the ‘mainstream’ focus of the music in their hometown. “[The move] opened up a lot of new perspectives,” Linjen says. It was here that they started releasing new music, culminating in their tense, riotous 2018 debut, Image. Their new record, Several Others, is a much sparser affair. Grounded by the haunting vocals of Fenne Kuppen, the album seems intent on getting more from less. “(I Leave You) Wounded,” for example, was conceived as an experiment to see how they could build tension in a song while using limited instrumentation. The driving “Heat,” on the other hand, showcases the band operating at full power. “Hold me, hold me down,” Kuppen sings over lacerating guitars and relentless drums, the determination in her voice growing as the song goes on.

Eccentric, bizarre, psychotic; there’s a reason The Guru Guru’s self-described ‘borderline rock’ has attracted a considerable fanbase since their formation in 2012. Built from a combination of tortured riffs, vocalist Tom Adriaenssens’s dark, twisting narratives, and a live show renowned for its volatility, the Hasselt group occupies a distinct role in Belgian music. While the band has referenced influences like METZ and The Jesus Lizard, you can also detect the erraticism of early Biffy Clyro, the grandiosity of Manchester Orchestra, and even a touch of math rock, particularly on the band’s debut, P C H E W. Sophomore outing Point Fingers, however, was darker, concerned topics like divorce and mental health. Adriaenssen’s experiences with insomnia are candidly detailed on “This Knee On Ice,” but it’s the shifting intensity of “Origamiwise” where The Guru Guru seriously flex their muscles. A delicate balancing act of loud and quiet, resigned and aggressive, “Orgiamiwise” hits hard—which could also be said of The Guru Guru themselves.

Few alternative acts have been met with as much acclaim outside of Belgium as Brutus, a band that claims Lars Ulrich and The Dillinger Escape Plan’s Greg Puciato as fans. The trio’s seismic post-rock is centered around the towering performance of drummer/vocalist Stefanie Mannaerts. Their 2017 album Burst was a noteworthy debut, but it was with 2018’s Nest that Brutus’s ambition was fully realized. The album explores the concepts of loneliness and anger, setting them against songs that demonstrate both atmospheric restraint (“Space”) and intense release (“Cemetery”). The trio recently released a live recording of a performance in Ghent, essential listening for anyone wanting to experience the band in action from afar.

A little bit Fugazi, a little bit Sonic Youth, Liège’s It It Anita pair chugging riffage with volcanic drums. Led by vocalist/guitarist Mike Goffard, their violent and unpredictable style of alt-rock is an exercise in relentlessness, the band doing its very best to blow up everything in sight via a combination of heavy distortion and huge drums. Over the course of several albums and EPs, the quartet have developed a reputation as a ferocious live act, and that same energy translates to their LPs. They’re in particularly imposing form on 2021’s Sauvé, whether it’s the sludgy wallop of “See Through” or “Routine”’s relentless barrage of riffs. “Even if our world is going mad, stay optimistic,” says Goffard, explaining the album’s core message. “Be an actor and not a spectator.” Potent advice from a much-loved band.

While most of their songs occupy the same barbed post-punk territory as U.S. peers like Omni and Parquet Courts, the Limburg band Fornet also bear the unmistakable influence of krautrock, resulting in a sound that feels both expansive and contained. Songs like “Erase (I’m Alive)”, from their self-titled 2017 EP, agitate with jabbing guitars and icy keys, while the shape-shifting “Two Is A Remote”, from 2020’s Anti-Tragedy is, at various moments, a sparse spoken word piece, an industrial interlude and an introspective instrumental. Anti-tragedy is the most complete expression of the band’s expansive sound to date, a perfect reflection of their full potential in nine fiery tracks.

A tornado of offbeat riffs, yelps, and synthesizers, Ghent four-piece Raketkanon whip up a distinctive blend of hard rock, math rock, and post-rock. Vocalist Pieter-Paul Devos is nearly impossible to understand, his delivery veering from pained cries to indistinct mumbling. Their lauded second record Rktkn#2 was produced by Steve Albini, and follow-up Rktkn#3 offers another frantic collection of songs that swing from tender (“Robin”) to demonic (“Hannibal”). Admirable if just for the band’s commitment to keeping things weird, the album also effectively displays the eclecticism that makes Raketkanon such a crucial member of Belgium’s current alt-rock scene.

On Annabel Lee’s most recent single “See You Naked,” vocalist/guitarist Audrey Marot refuses to get too excited: “You kissed my forehead, but you’re a gun in my back,” she sings, kicking off a narrative of uneasy joy. The Brussels-based quartet’s output has evolved from the super lo-fi sound of 2017’s Little Sad And Not So Sad Songs to the driving garage rock of 2020’s Let The Kid Go. Bagging the Les Octaves de la Musique award for best pop/rock album of 2020, Let The Kid Go is full of tales of love, loss, and survival. “Never Ever” is affecting in its depiction of a relationship that is slowly unraveling, and the defiance of “See You Naked” hits hard. Marot’s lyrics express both doubt and resilience, and her realization that “I don’t like you, but that’s fine” is sung with audible—and understandable—relief.

With a name like Slow Crush and songs that tend toward dense shoegaze, it’s hard not to associate the Leuven act with the mighty Slowdive. Push past the initial haze, however, and the band’s love of acts like The Smashing Pumpkins and Deftones becomes apparent. Their 2018 album Aurora is a powerful amalgamation of their influences, with vocalist/bassist Isa Holliday’s shapeless singing drifting behind glacial guitars and stormy drums. Opener “Glow” is a particularly towering piece, with Holliday’s vocals adding brightness to the dense, oppressive instrumentation. Now with a new guitarist and a new label, Slow Crush are adding the final touches to album number two. If it has even a hint of Aurora’s vast scope, we’re in for a treat.

Sporting grunge-y guitars and the heartfelt singing of vocalist Bert Vliegen, Teen Creeps spike their melodic indie rock with emotional weight that has a clear sense of melancholy—rarely outright sad, but always laced with a sense of wounded insecurity. On their latest album, Forever, the band pushes past the scraggly indie of their debut, drawing on the melodic emo of bands like The Promise Ring. From the wrenching “Defender” to the whimsical “Signal Dream,” Forever is testament to the group’s knack for a killer melody, as well as Vliegen’s growth as a lyricist.