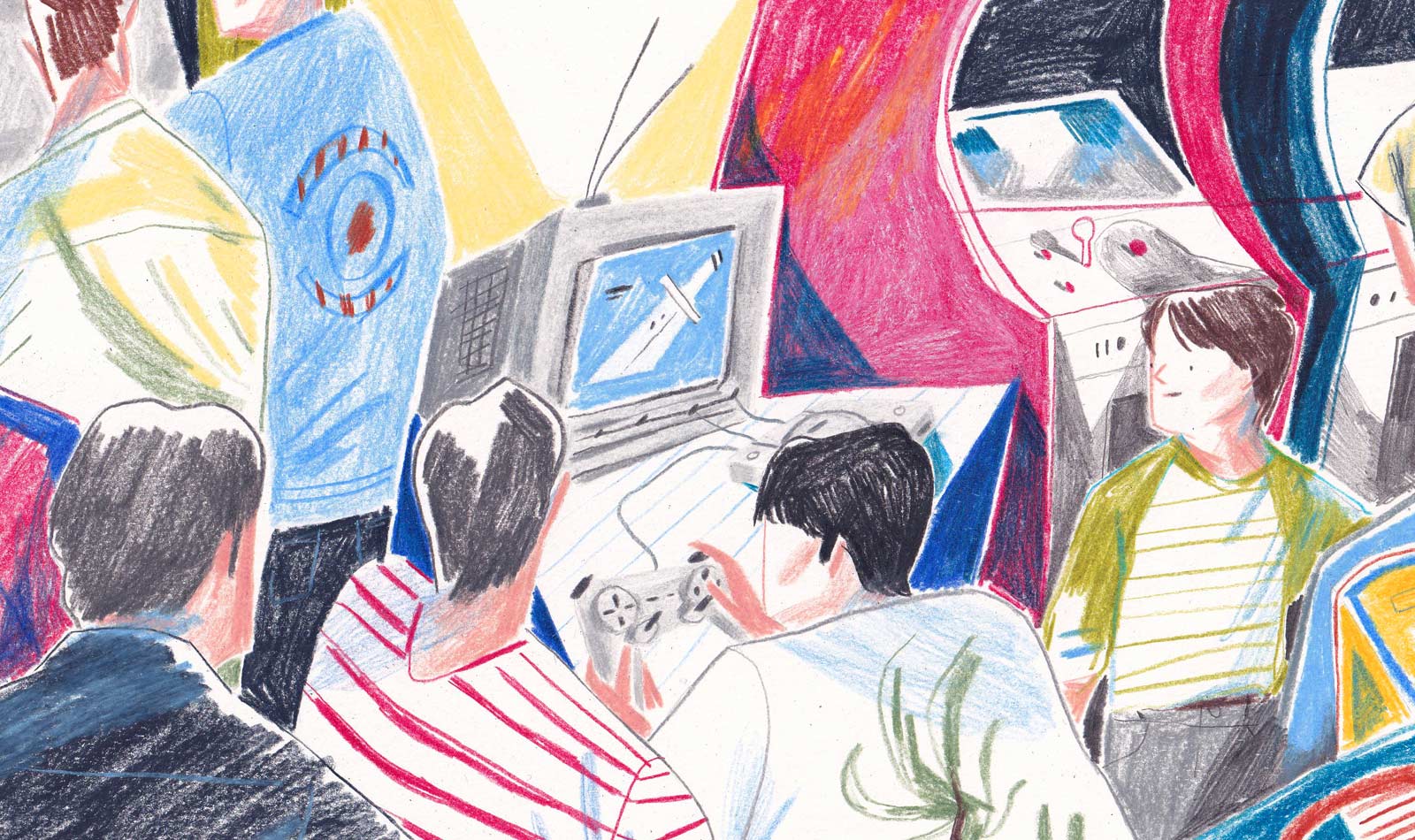 Arcades in Jaboatão dos Guararapes, where I grew up, were weird and magical places in 1998—especially in the more impoverished neighborhoods. They were smoky, dirty places where grown-ups and kids would face each other as equals on fighting game cabinets. The only arcade close to where I lived didn’t have a name or even a sign, so people just called it Aldo’s Arcade, after the man who ran it. Aldo’s had a few PlayStations and dozens of game CDs. You could pay by the hour to play on his consoles. For most kids in that corner of the Third World, that was the only way to play a PlayStation game.

I was only twelve when I started going to Aldo’s. He used to treat me as a mascot. I was deceptively good for such a small kid, and people would spend many coins in the cabinets to beat me. Maybe that’s why he liked having me around. It was in between fighting game matches that some high-pitched notes cut through the noise and reached my ears. They felt eerie and peaceful at the same time. The sound emanated from a nearby TV. Curious, I stepped closer to see what this older kid was playing on one of Aldo’s PlayStations, unaware that what I was about to see would set the course for the rest of my life.

On the screen, a florist walked out of a dark alley. The camera zoomed out, revealing a futuristic city. A name, Final Fantasy VII, appeared on the screen. The music changed; brass sounds suggested that something big was about to happen. Then, a close-up in a moving train, a fight scene, and some text in English.

I did not know what was going on, but it was super exciting. The music intensified as if things were about to get real. The main character had a giant sword, his partner had a machine gun, and they both could use magic. Nothing made any sense, yet it was impossible to look away. I asked the other kid what the game was about, and he didn’t know either. Curious and impressed, I became obsessed. Instead of spending my coins on arcade machines, I started playing Final Fantasy VII. I needed to know what was going on, why they were fighting, and why the music made that scene feel so important.

It was not a game one could finish in a single sitting. I didn’t have a PlayStation, so I had to start from the beginning every single time until Aldo let me use his memory cards. At that point, the opening scene was already ingrained in my brain, and I’d always hum it on my way home.

Sadly, Aldo’s Arcade went out of business. Many kids lost their favorite hangout spot, and my opportunity to beat Final Fantasy VII was gone. However, after having played it little by little for almost a year, the game stayed with me. I remember bringing home written down phrases to translate with the help of a dictionary. That’s how my English vocabulary began to grow. Words like “item,” “equipment,” and “menu” were the first ones on my path to becoming an English teacher.

It is weird to think of the butterfly effect that shaped your own life. Becoming a teacher was not planned. Money was short and someone’s son needed classes. It just so happened that I knew more English words than your average Brazilian teenager.

“Good teachers never stop studying,” said one of my teachers once—it was good advice. Getting better at English did more than lead to better jobs. A better paycheck allowed me to finally beat Final Fantasy VII and many other games from the franchise. I also had the opportunity to live in the United States for a while. Eventually, I returned home, landed a stable, well-paying job, and spent my money on things I loved: a new guitar, video games, and good food.

Although that sounds like a happy ending, it wasn’t. Being stuck in an office job began to kill my soul little by little. In my late 20s, there was no time for music, gaming, or any of the things that once motivated me. I was only drifting, carried by the tides of whatever happened. Anticipating how tedious my days would be for the next few decades constantly gave me moments of doubt, sadness, and anxiety. I was stuck in traffic during one of those moments, reflecting on how I had let circumstances guide me instead of taking any risks, when I looked through the window and realized where I was.

My car was right in front of what once was Aldo’s arcade. The place had become a bar, and some horrible music was coming out of it. That was one of those moments when your whole life flashes in front of your eyes. Mine rewound to the moment I heard some eerie notes coming out of a tube TV. Due to a sudden urge to hear those notes again, I looked up the song from Final Fantasy VII on my phone and finally learned its name: “Bombing Mission,” composed by Nobuo Uematsu.

Art has a power that we take for granted. That kid who went to Aldo’s never wanted to be stuck in an office. He wanted to design games, compose music, and make people feel as excited as he was when the heroes jumped out of that train in the game’s opening scene. It’s such a short section, but it teaches you presentation, songwriting, and non-verbal storytelling: All things that I had studied and valued without knowing why. The music intensified, the stakes were high, and I made a decision to change the direction of my career and my life.

When the Final Fantasy VII remake came out 23 years after the original game’s release, that kid from Aldo’s Arcade was finally working in the video games industry as a games journalist and a game designer. Watching the franchise’s title showing up on a TV I had paid for with money earned from following my dreams was an emotional moment; an overwhelming combination of nostalgia, happiness, self-awareness, and gratitude.

Reinventing myself was hard, but life threw motivational metaphors at me. I thought “Bombing Mission” was absolutely perfect as it was, so imagine my surprise when someone showed me an orchestrated version of the song performed by the Royal Stockholm Philharmonic Orchestra as part of Grammy-winning music director and conductor Arnie Roth’s Distant Worlds concert series. Distant Worlds turns “Bombing Mission” into something that feels like a more powerful version of itself, keeping all the uniqueness and weirdness of a score that is trying to convey complex concepts while also keeping a video game player entertained. Though it’s being played by a full orchestra, “Bombing Mission” still sounds like video game music—it’s not trying to be anything else. Same goes for that kid at Aldo’s Arcade who didn’t know English. He does now, and he gets to talk about games all day long, but it only happened when he decided to stay true to himself.

Uematsu had to write the soundtracks for many other games under heavy restrictions. Older consoles could only handle five to eight simultaneous audio channels, including the ones used for fight and jump noises. He was given sixteen channels to work with during the production of the original Final Fantasy VII. Although still limited, it was more than twice what he was used to. Nonetheless, sixteen channels still is a limitation. Yet, the music written by Uematsu still translates beautifully to performance by a full orchestra. Distant Worlds proves that game music has a distinct identity, and it can be preserved even after technological constraints are gone.

In a way, both Final Fantasy VII and “Bombing Mission” were experiments. This is a game that takes themes like life, death, and gray morality and mixes them with magic, futurism, and evil gods. It used ominous music instead of the usual, encouraging kind of soundtracks that older RPGs were known for. The project had everything it needed to go wrong, and it became one of the most iconic works of art of all time in every single aspect: visuals, gameplay, storytelling, and music.

Today, it is hard for me not to tear up when I listen to those first notes of “Bombing Mission. Even Roth seemed surprised by the reaction he gets from people who attended the Distant Worlds concerts, so I doubt I’m the only one who was significantly affected by that soundtrack. In a 2004 interview, Uematsu said: “We hope that eventually there would be an occasion which I can personally prove that game music can in fact impress many different people and move them.”

If only he knew.

Davi Braid is a Brazilian games journalist and tech writer at DiamondLobby. He has written for TheGamer, WeGotThisCovered, Dot Esports, Tech Radar, and many other publications. Twitter: @DaviBraid