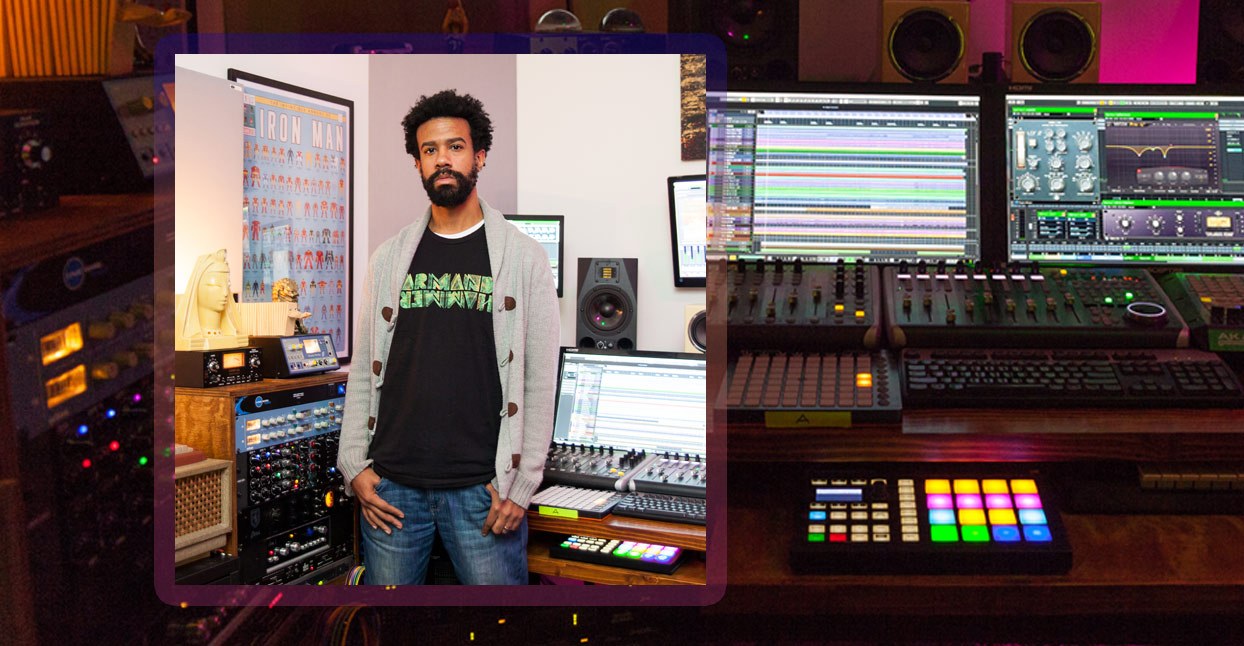 “We were just gonna make the record we wanted to make, because we figured that was our last shot.”

Willie Green is speaking about History Will Absolve Me, the 2012 solo album by billy woods that became a turning point not only in the history of woods’ label, Backwoodz Studioz, but for Green’s entire career. Green and woods had worked together before, notably on Cape Verde, the final album by Super Chron Flight Bros, woods’s group with the rapper Privilege. But on History, Green had woods in his apartment studio, overseeing the project as executive producer, feeding him acerbic, trouble funk production that churned beneath woods’s grim reality rap. The two defied the rose-colored “cloud rap” trends of the times, pursuing a sound that was corroded and cacophonous—a step beyond even the trademark Definitive Jux dystopia—to create what became their defining statement.

Seven years later, Green has become Backwoodz Studioz’s secret weapon; his fingerprints have turned up on nearly all of the label’s releases, and he frequently serves as a producer, engineer, and executive producer. He is also a fixture of the New York independent rap scene, producing and engineering albums for Uncommon Nasa, PremRock, Blockhead, Quelle Chris, and Roc Marciano. (Elucid describes Green’s technique as “laying hands” on the sound.) And while his hard work is finally paying dividends—Armand Hammer’s Paraffin, which Green mixed and mastered, received almost unanimous critical acclaim—his career began, inauspiciously enough, with an email.

Green met woods in 2009, not long after he moved to New York from Boston. He had heard Super Chron’s Emergency Powers, and sent an email to the label, hoping to make a connection. When that email went unanswered for months, Green invoked a rule that has since become vital to his career: “Always send a follow-up.”

Eventually, woods and Green connected, and the latter ended up producing six tracks on History Will Absolve Me. The album was recorded in the Greenhouse, which was Green’s then-home studio. The original Greenhouse was a two-bedroom apartment Green shared with his girlfriend, who is now his wife. Wires snaked through the apartment, vocals were recorded in the kitchen, and an engineer assistant or a rapper often occupied the couch. It was in this relatively humble setting that Green recorded and mixed such underground staples as Elucid’s Save Yourself, releases by PremRock & Willie Green, Armand Hammer’s Race Music, and woods’s Today, I Wrote Nothing.

Green outgrew the home studio, and moved the Greenhouse into its own building in 2017. There, he produced two albums for Henry Canyons, milo, and Elucid’s Nostrum Grocers project, and the Armand Hammer albums ROME and Paraffin. Then, one morning, he arrived at the studio ready to mix the last song on a Case Watson album only to find his key didn’t work.

“I called management and I’m, like, bugging,” he says. “They just say, ‘Oh, we’re gonna send an email to everybody later on.’ They hadn’t gotten around to telling us that we’d all been kicked out of our studios.”

He was beside himself, making do without a proper studio for months. In the fall of 2018, Backwoodz reached out to see if Green could master Blockhead’s latest album Free Sweatpants. They needed it in two weeks.

“When I found a studio space, I had nine days,” Green says. It was a raw open space, and he needed a huge booth for the sound treatment. He called in all his favors. Rapper friends like Duncecap of Karma Kids and PremRock wielded saws and hammers to build a studio.

“Seven days later, the shit was dope,” he says. “It was a whirlwind for sure.”

We chatted with Green about the evolution of his sound, and a few critical moments in his discography.

What’s it been like to be present and play a part in the evolution of Armand Hammer?

That collab goes back to woods’s History Will Absolve Me. We did “Freedman’s Bureau,” and since then, I think all of their various albums we’ve had some kind of collab. It’s one thing if you’re a great MC, but when you find somebody that’s on your same plane and pushes you to be nicer, that’s kind of a real magic link-up.

[Save Yourself] really affected and changed my style in mixing because of the way that Elucid works. Distort anything you want, trash this up, fuck this up. Whatever it is, as long as the vibe is there, go nuts and do your thing. To have someone with that much talent to let you loose and be fully creative really opened the doors for me and the techniques I’m using now. As much as I do more pop and R&B stuff with singers, my favorite records to work on are these grimy rap records.

What’s one of the most challenging projects you’ve made in the Greenhouse?

Corina Corina’s Hangover Music. It was our third project together, and in a lot of ways, we were just going for the gusto. For me as producer, co-writer, engineer, and doing the horn arrangements, it’s really stretching my various abilities. It’s an exciting thing. If you’re dealing with 150 tracks of horns, strings, vocals, live drums, loops, there’s so many different challenges there just to make all these things blend. It’s more in-depth than a mixtape mix. It was the most ambitious thing either one of us had dove into and there was a lot of trust.

There’s so much information on how to make records. There are rules to make a great pop record that, but sometimes those rules prevent you from experimenting and trying things. But that’s the art part. Sticking a vocal preset on someone’s voice to make them sound like Ariana Grande, because that’s what radio-ready pop is supposed to sound like, is not art. That’s duplication. I don’t want to be chasing everybody else’s shit. I want to be the somebody they are chasing.

A few months before I moved out of Boston, I heard the Super Chron Flight Bros album Emergency Powers. First thing I did when I moved to New York was email Backwoodz to say, ‘Hey, I’m from Boston, I’m this producer that just moved to New York. Would really love to work with Super Chron.’ I came in as a big fan of them, and this is the first album I’m doing after moving to New York. It felt like my big fucking shot.

[Open Mike Eagle] hit me up about it because that beat was on …Of Heroes & Villains. I remember making the beat and thinking, ‘No one’s ever gonna rap on this shit. How would you even approach it?’ Honestly, when he sent it back I didn’t get it. It’s such a weird beat. But I had the wisdom to shut the fuck up and let someone else’s artistry live. Now, Mike Eagle is on top of the world, and I’m affiliated.

Green’s Work As Producer and Engineer

That’s still one of the pieces I’m most proud of. I did “NY Blanks,” and Backwoodz hit me up in need of a joint to be a single. They set me up to send something that he would dig. That record really affected and changed my style of mixing because of the way Elucid works. A lot of the vocal effects he does, and then he sends them to me and I elaborate on that. As you go further through the Armand Hammer catalog and you get to Paraffin, there’s a lot of big, bold effects in the whole track. Those are styles that came out of how we approached Save Yourself.

It’s hard to distill Paraffin down for brevity, but being the fourth Armand Hammer album I’ve engineered and the millionth I’ve done for woods and/or Elucid, the process was mostly the same, although with the comfort level we all have now, it was also the most organic. The great thing about working with Armand Hammer is the trust and leeway they give me sonically. For example, the blend of the two beats in “Fuhrman Tapes” was basically left to me since I produced the second half, but for such a dramatic beat switch coming from an intense hook/chant into woods’s verse, I wanted to do something dramatic. These guys really embrace noise and randomness in music. Elucid put in distortion and the reverse vocal effects, but I wanted to have them really be a part of the music, and not just atmospheric stuff.

I’m a grandiose dude. I like epics. I like graphic novels. Doc Savage was born out of that. My father gave me his collection of Doc Savage pulp fiction books from when he was a kid. They all have these crazy names. All the songs on the album are named after the books.

I wasn’t that familiar with Tom Waits at the time. That guidance is fun for me. Prem and woods will do this, they’ll bring me a sample idea and say, ‘Take it and go.’ I always do the sad ones for Prem. They’re always mid-tempo sad songs. “Drunk on the Moon (Ain’t Got You)” is one of my low-key favorite beats I’ve made. Prem is such a good storyteller. I tend to make joints that let him flex that.

I’ve been a big fan of Castro’s for a long time. He came to me specifically for this one. He wanted to do it in the Greenhouse. You get some artists who have songs, but there’s not a real sense of focus for the overall project. Castro came in, and he knew what he wanted TOSH to be. I was executive producer for organization, but as far as shaping the overall sound that was orchestrated by Castro. An organized artist with a very specific purpose is not always the case, but a welcome presence.