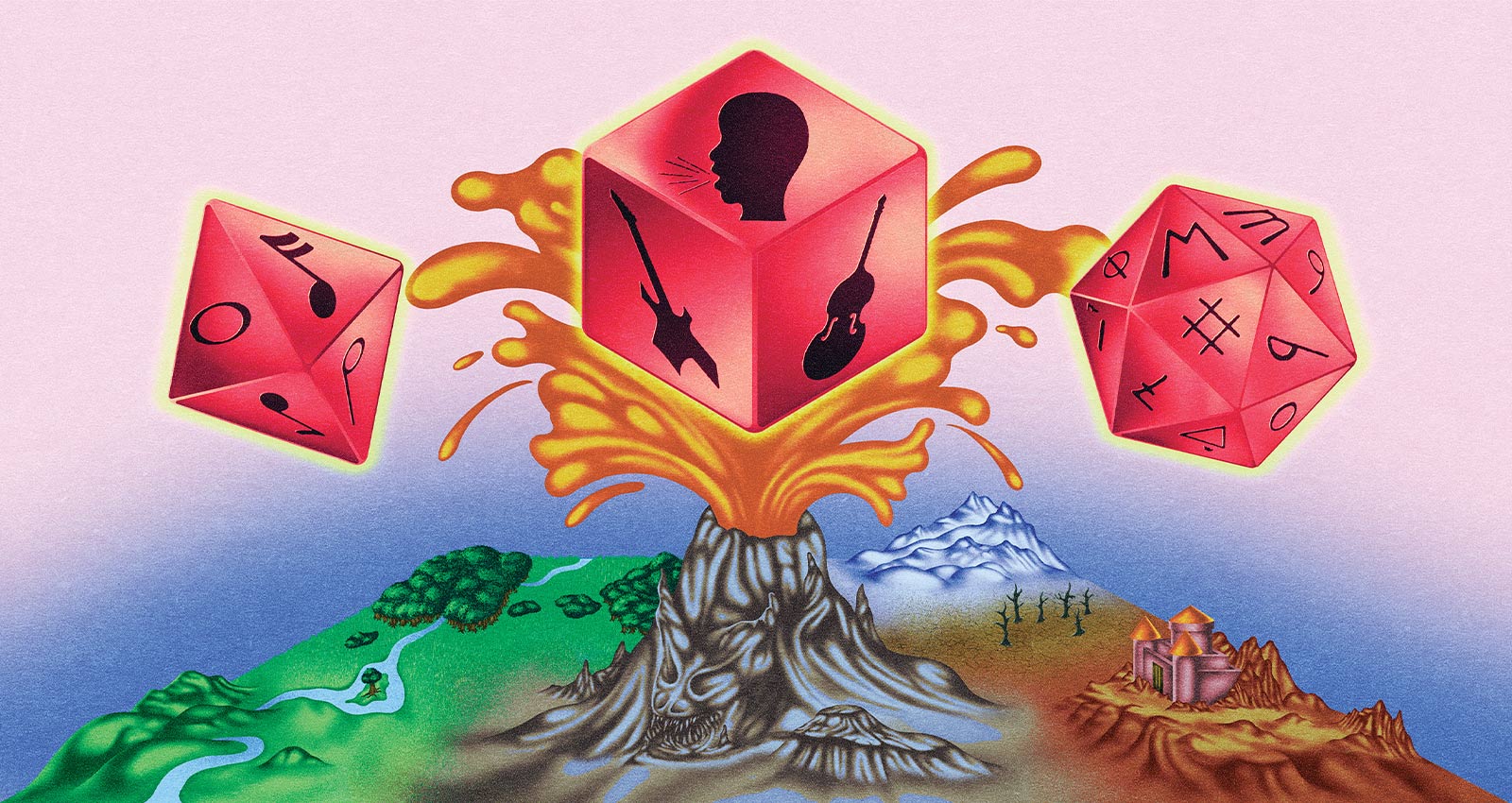 Since the first time a group of players gathered around a folding table in a wood-paneled basement to roll dice and slay dragons, music has been an integral part of analog, in-person gaming. Picking the perfect beer-stained Black Sabbath record to complement your guild’s dungeon crawl has always been at least as important as understanding the rules. In recent years, a generation of musicians has taken the concept of tabletop soundtracks more literally, composing scores specifically designed to be listened to during gameplay. Some of these scores are meant as background music for role-playing sessions, while others soundtrack specific board games and card games. Many of the composers behind this music also work on video game soundtracks, but their analog work is distinct, both in the way it’s written and the way it’s experienced by players.

“Writing for board games is definitely a lot more challenging than scoring fixed visuals or even a video game, which at least has fixed set pieces,” says Plasterbrain, the composer behind the scores for the board games BattleCON and Bullet[heart]. “At times it can feel like being asked to draw a person’s original character without any references.”

A score for a board game or a role-playing session may be asked to soundtrack a theoretically limitless set of outcomes, so composers can’t write too heavy-handedly. The Alabama-based composer Jacob McNatt has leaned into improvisation with his Tabletop Ambience music. “I hardly ever use a metronome,” McNatt says of his tabletop scoring sessions. “I don’t quantize or try to perfect every note. Instead, I allow notes to linger, leave space between passages, change the key, fluctuate the tempo, and otherwise try to make things sound as organic and natural as possible.”

Graham Plowman, an Irish composer whose soundtracks are in dialogue with H.P. Lovecraft’s work, also does his best to get out of the way of the gaming experience while enhancing it at the same time. He tries to affect a “very general creepy mood” in his work, and he says he avoids lighter moments “because there’s just no way of knowing when such a moment is supposed to arrive.”

Though he’s now semi-retired from game music, the Berlin-based composer Chris Manthey boasts an impressive discography of video game soundtracks recorded under the alias Calined. Among those was his score for Xolitaire, a riff on the classic one-player card game. It was a low-key project that granted him more freedom than he was used to. “The only guideline was that it should fit the many visual themes possible in this card game,” he wrote in the digital liner notes.

We interviewed Plasterbrain, McNatt, Plowman, and Manthey about some of their key soundtracks and the specific challenges and joys inherent in composing for games.

“It sounds pretty cliché, but I’ve been writing songs since I was very little and have been into video games for just as long, so those interests sort of sprung up together,” Plasterbrain says. “The last two songs I chose for recital work in piano lessons were Rachmaninoff’s Prelude in C# Minor, because it sounded like a boss theme, and then Clair de Lune, because I had first heard it as an excerpt used on the game over screen of a little indie game called UIN. True story.”

Her love of video game music helped inform her work for Level 99 Games, a game publisher famous for making what they call “tabletop games for a video game generation.” One project dovetailed particularly well with her interests—Bullet, a shoot-’em-up (or “shmup”) -style game in the vein of Touhou. After an initial phase obsessing over early Nintendo soundtracks but years before she would work on Bullet, Touhou became Plasterbrain’s biggest influence.

“The early Nintendo influence was mostly supplanted by my interest in Touhou in the late 2000s, and that’s where I was creatively when I first started doing digital music,” she says. “I’m one of the many Western hacks whose music career began around emulating [Touhou creator] ZUN. It’s a fine tradition.”

Revisiting that influence was her way into cracking the soundtrack for the game: “Bullet is a shmup-style board game with character themes, so of course the music should recall Touhou. That’s in part because the Touhou comparison was an intentional marketing draw, but also because Touhou music conventions are shorthand for ‘cool magic boss fight.’ One of the first things I did when I began writing the soundtrack for Bullet season one is drum up a list of Touhou reference tracks for each character.”

The songs on the Bullet soundtrack also serve a specific function within the game. They’re all exactly three minutes long, the length of a round of gameplay. In other words, each song doubles a round timer, a utilitarian function which entailed strict compositional guidelines for Plasterbrain. “The three-minute constraint presented some technical challenges,” she says. “You can sometimes get away with a bridge, though that’s not a convention in Touhou songs, but if it’s too long or unique it can sometimes sound like two separate songs grafted together. So it ends up being a balancing act between maintaining the core ideas of the song and wandering off.”

As an avid tabletop gamer and dungeon master (commonly shortened to “DM”) himself, McNatt knows exactly what he’s looking for when he sits down to compose music for a role-playing campaign. “I think understanding what is distracting and what can potentially pull a player out of the moment in a D&D game helps inform my creative decisions in writing music,” McNatt says. “I’ve witnessed, as a player and a DM, moments where a poor choice of music on a D&D playlist completely wrecked the tension of a moment, and while it can be really funny, it can also sometimes derail a lot of hard work on the DM’s part.”

Like Plasterbrain, McNatt grew up around music, and ultimately had a revelatory moment while listening to a video game soundtrack. For him, the epiphany came when he first heard Greg Edmondson’s score for Uncharted 3. “It really was sort of the soundtrack to my life for a while,” he says. “It still stands out in my mind as the moment where I remember thinking, ‘I want to do that for a living.’”

McNatt’s credits include scores for video games and podcasts, but his most personal work, and the work he always comes back to, is the music for tabletop role-playing campaigns. Tabletop Ambience: Ghosts of the Ice is an archetypal McNatt production. Recorded in December 2019 to accompany a holiday-themed campaign he was running as dungeon master, the soundtrack is an icy rush of mysterious atmosphere and orchestral grandeur. “I try to strike the balance between ‘sweeping’ and ‘minimalistic’ with the TTRPG music that I write,” he says. “If a specific outcome needs its own musical cue, then I will do that, but I’ve actually found that creatively, it’s much more fun to allow the players to fill in the gaps. Sort of a less is more approach.”

“Some of my favorite scores are the subtlest ones,” McNatt adds. “For the most part, I think tabletop RPG music’s goal should be to underscore what’s happening, not explicitly state it. So I’m typically latching onto the emotion of the surroundings rather than an actual specific set of occurrences, if that makes sense.”

The rest of the composers in this piece are known for making music that would primarily end up being heard by people deeply invested in tabletop gaming. The soundtracks Chris Manthey composed as Calined have likely reached a slightly less self-selecting group. “When I was living in Vancouver, I had this idea of offering my music composition as a service and immediately got invited by a studio in Vancouver that made mobile games,” Manthey says. “Which in hindsight, totally shocked me that this really happened. From there on I knew I could try to make a living with composing music for games.”

Manthey’s music has soundtracked a bevy of the kind of pick-up-and-play games that people tend to download to pass the time on their commutes, which means a lot of people who likely don’t consider themselves gamers have heard his work. One of his soundtracks was for 2014’s Xolitaire: a video game, technically, but an old-school, physical card game in spirit. It’s easy to forget with the post-Catan gaming boom showing no signs of abating, but for decades, diversions like solitaire were—if you’ll excuse the pun—the only game in town. Manthey’s soundtrack hearkens back to that era, too.

“In this case, we actually don’t have any dynamic scoring and the songs actually play more like they are coming from a jukebox that can be configured by the player,” he explains. “So, a lot of the game is about customization, same with your musical choices. On one hand this feels dynamic, but also gives more of a living room kind of vibe, where the music is coming from next to you and you are just listening to it while you are playing.”

The Xolitaire score feels soothing in the same way a good round of the game should be. Manthey credits the game developer with giving him a ton of creative freedom, so long as the mood of the music fit the game’s many possible visual motifs. Consequently, the songs feel liberated, almost weightless. “The mood of all the pieces should be kind of relaxed, but continuously moving, like you are playing a card game,” Manthey says. “There is always something happening, but the pace is quite relaxed.”