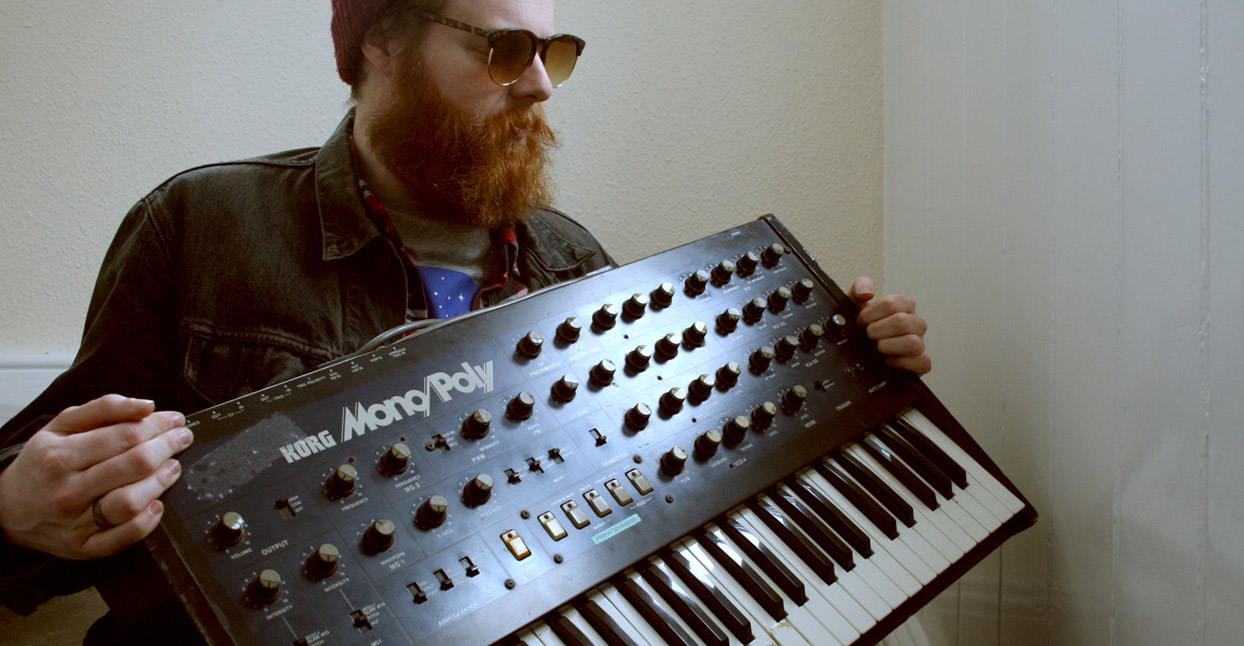 Back in the ’60s, new technology emerged that changed film music forever: the synthesizer. Spurred on by the pioneering work of Wendy Carlos and the BBC Radiophonic Workshop, this innovation allowed low-budget filmmakers the freedom to create their own scores, as orchestras were damn expensive. And while there was a lot of questionable synth-produced music being churned out, some artists transcended the form.

A few that reached critical acclaim include director/composer John Carpenter (Halloween, Escape from New York), prog rockers like Goblin (Suspiria) and Tangerine Dream (Sorcerer, Thief), and New Age artist Vangelis (Blade Runner). Film composers like Fabio Frizzi (Zombi, The Beyond), Brad Fiedel (The Terminator), and James Horner (Commando) used the otherworldly sounds of the instrument to take action, science fiction, and horror flicks to the next level. Synth even made its way into the “serious drama” territory—Vangelis won the 1982 Oscar for Original Score for Chariots of Fire.

Synthesizers fell out of fashion for a few decades, relegated to the cheesy heap of the ’80s. Recently, however, synths have made a big comeback as ’80s-influenced sounds have found their way into modern-day compositions. John Carpenter has embarked on an unlikely second career as a rock star, SURVIVE’s Stranger Things score thrilled new audiences, and contemporary composers like Cliff Martinez and Disasterpeace crafted incredibly effective music for revered flicks Drive and It Follows, respectively. More than 30 years later, those classic compositions inspired an entirely new generation.

Despite digital advances and the democratization of film, making movies is still time-consuming and costly. So some new-school synth composers have decided to skip the “having an actual film” step entirely. According to Robin Ogden, aka OGRE, who’s put together music for video games and created alternate soundtracks (with collaborator Dallas Campbell) for films like Night of the Living Dead and 2001: A Space Odyssey, there’s a real freedom to making imaginary soundtracks.

“The biggest appeal to working on an imaginary film is full creative control. You’re the director, writer, and composer, and dealing with cinema of the mind, so things don’t need to be locked to picture. The music doesn’t need to follow traditional musical formats, so it can be a break from structuralist convention,” Ogden says. “The other thing I really enjoy is being able to reprise thematic ideas, and explore them more fully, which isn’t something you can always get away with across a more conventional album, and try to tell a story through music. Exploring a narrative instrumentally is a pretty awesome thing.”

Synthesizers make that easy, as orchestras are still damn expensive. Ogden explains, “We’re definitely having a real renaissance of synthesizers right now, and hardware is more affordable than ever—in some cases it can even be cheaper than some software instruments or effects. It’s a new golden age for analog, and digital gear is taking things into new uncharted territories. Modern synths stay in tune, and there’s considerably less risk compared to buying vintage gear.”

Imaginary soundtracks not only provide fun listening experiences, but their homages help introduce people to the original sources of inspiration. Similar to the days when zero-budget straight-to-video exploitation flicks flooded video stores, there are a lot of imaginary soundtracks to wade through and discover. The selection below should help you make some informed listens.

Le Nove Ombre Del Caos (or The New Shadows of Chaos) has album art that looks like every ’70s giallo poster, so you can probably make an educated guess as to who influenced Adamennon’s sound. To his credit, Adamennon (aka Adam van Maledict, who’s also played in a bunch of metal bands) is actually Italian, so I guess he has a cultural right to it. Instead of chintzy synth sounds, the Como-based artist uses full-on overdriven organs and ominous chanting (courtesy of frequent collaborator Maximilian Bloch) for maximum creepshow effect. Frizzi and Goblin’s Claudio Simonetti would be proud.

Bryce Miller previously composed a soundtrack inspired by Stieg Larsson’s Millennium trilogy, and City Depths builds on similar themes of isolation and buried desperation—only without all the weird sex stuff. The aesthetic feels very mid-’80s Michael Mann (Manhunter, Thief), neon lights reflecting off rain-slicked city streets. The story takes place over a single night. The ambience grows more intense as the moon travels across the sky, building from a slow creep to stabs of drama. A lot hides in the darkness that even the rising sun can’t reveal.

Not to be outdone by other imaginary soundtrack artists, Europaweite Aussichten puts together a score the length of an actual feature-length movie. The artist states that Purgatory was an attempt to imagine what would happen if Boards of Canada scored an ’80s slasher flick, and he succeeded. These tracks pulse with barely-contained menace. Whereas BoC use their ambient electronics to guide the listener through nuanced feelings of joy and melancholy, Europaweite Aussichten aims straight for fear. As long as the record may be, it holds you in its clammy grasp the entire time.

Disko Nero Recordings goes all in on their shtick, offering “lost” soundtracks by “unsung maestro of the genre Gavino Morretti.” The Satan Complex was supposedly released in 1984, although its plot summary sure sounds like a mashup between Michael Mann’s obscure 1983 horror flick The Keep and John Carpenter’s minor 1987 classic Prince of Darkness. Accordingly, its soundtrack sounds like a mashup between Tangerine Dream’s ethereal score for the former and Carpenter/Alan Howarth’s chilling score for the latter. It may not be real, but you could probably fool somebody into thinking it was.

Drokk: Music Inspired by Mega-City One is the imaginary soundtrack to an imaginary version of a real movie. Got that? Basically, the makers of the 2012 film Dredd (based on the long-running comic series Judge Dredd) approached Portishead’s Geoff Barrow and TV composer Ben Salisbury to score their film. It didn’t work out, but Barrow and Salisbury took the unused material and created a fake soundtrack to their own fake Judge Dredd movie. Their more minimalist approach wouldn’t have fit the high-powered theatrical release, but it presents a bleak look at the post-apocalyptic future of Mega-City One, its inhabitants, and its surrounding environs—all of which were pretty bleak to begin with.

HAEX-HRLL, Further from the Truth

Dutch electro/hip-hop producer DJ Overdose took on the enigmatic HAEX-HRLL moniker for his stab at movie magic. Further from the Truth comes to us courtesy of Giallo Disco Records (manned by imaginary soundtrack specialist Vercetti Technicolor), and it tells the story of an alien takeover of a small, isolated town through minimalistic beats and analog ambience. The use of space and unexpected modulations provide a surprising amount of the creep factor and help this stand out from your average Vangelis-wannabe. While the cover art doesn’t look like a movie poster, it sure reflects the unsettling frequencies found within.

The Charles Park Trilogy was recorded in three installments over a 10-year period, so it’s that rare collection that not only gives you a look at the evolution of the story, but also the act that made it. The exponential jump in quality between parts illustrates how Makeup and Vanity Set went from toying around with cheap keyboards to crafting rich electronic soundscapes—much like how cinematic trilogies see a significant jump in budget and technical polish between entries. Unlike most cinematic trilogies, however, this vigilante tale only gets better as it goes, using the bright lights of the dance floor to accentuate the darkness.

OGRE and Dallas Campbell, All Hallows’

As mentioned above, Robin Ogden (who records as OGRE) and Dallas Campbell have collaborated on several “alternate soundtracks” for existing movies, but All Hallows’ was their first original work together. They certainly went all out—each individual track has a short piece of prose attached to it that furthers the story. Still, you can enjoy this aural slasher flick without having to look at words. The international duo love the Berlin school of synthesizer music and cheesy horror flicks, and they curate the perfect sounds from a panoply of MOOGs, Korgs, Farfisas, and more. They plan a sequel, of course.

Payback 2 (theoretically) concludes the saga of Jack Slade, a disgraced police detective who takes the law into his own hands. This celebration of this no-budget straight-to-video action flick takes the form of full-on synthwave, big beats, fake handclaps, and all. Street Cleaner clearly has fun with this—he even offered a “DIY vigilante kit” in a VHS clamshell, now sold out. While a silly nostalgia trip, it embraces current sounds instead of just trying to re-create the works of previous composers, tying the past to the present.

Rather difficult to Google thanks to a certain TV program, The Black Mirror’s storyline remains as opaque as the object it’s named after. It has something to do with experiments conducted by a sinister corporation known only as Norzhev Industries and a protagonist named Jennifer. Possibly involving astral projection? This project from the drone operator known only as Black Swan takes a more ambient bent, similar to the earlier work of Tangerine Dream. The subtle sense of unease it conveys would fit right into the modern twilight zone of Black Mirror, the show.