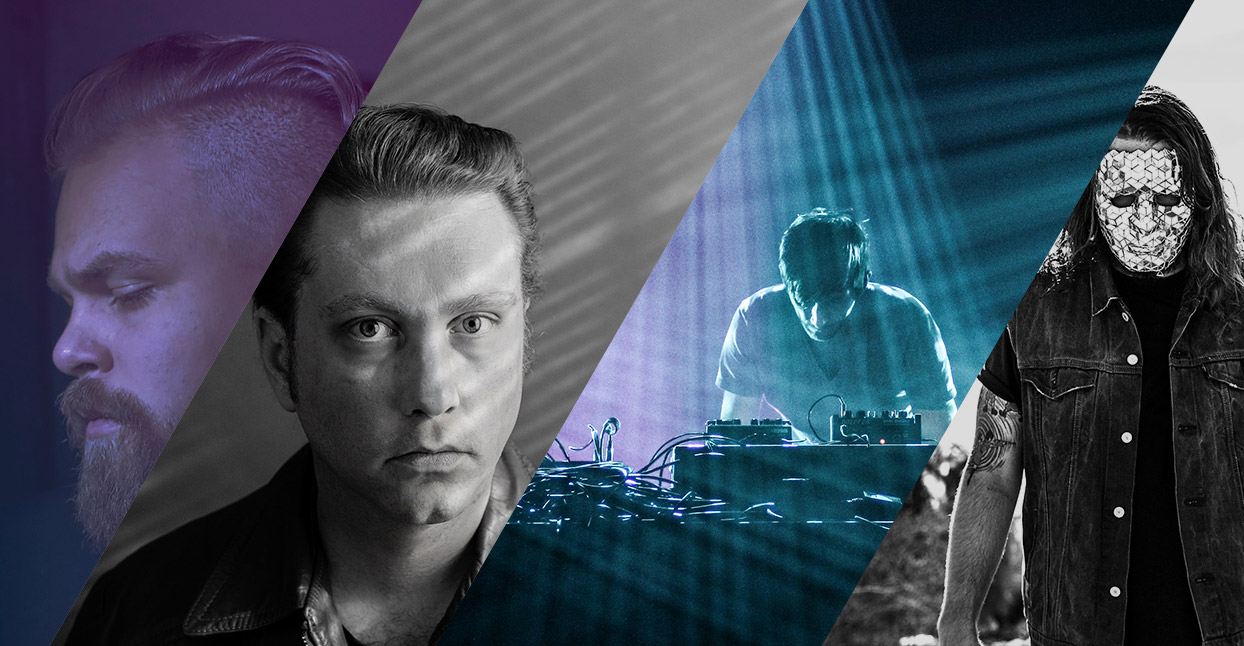 There are many reasons for the runaway success of Stranger Things. More than just being a tasteful ’80s tribute, the hit Netflix series gets so many of the small emotional details right: the heated D&D campaigns, the moonlit bike rides, the welcome return of Winona Ryder, and the narrative references to the Greatest Steves of All Time: King and Spielberg.

Then there’s there’s the score, courtesy of S U R V I V E’s Kyle Dixon and Michael Stein, which never feels cheesy or forced. Instead, it strikes a nostalgic chord, favoring subtle and sinister cues that either match or set the mood of nearly every pivotal scene. The title sequence is the perfect example—an instant meme that sneaks up behind you and whispers, “Boo.”

With S U R V I V E’s Relapse debut (HD037) on the way next month and Stranger Things fandom showing no signs of slowing, we thought we’d break down 18 other contemporary synth records that also sound as if they came from the Reagan era.

The perfect example of synthwave’s crossover success with heavy-metal and horror fans, France’s Carpenter Brut imagines Daft Punk in a Satanic panic. It may not be the most subtle music, but what did you expect from a producer who puts a creepy skull on his album cover, alongside roller skates, a phone shaped like hot-pink lips, and a stabbed pizza slice?

As if he wasn’t busy enough with Zombi and his own Majeure alias, A.E. Paterra has a new project with British composer Paul Lawler that plumbs the depths of the drummer’s android dreams. A healthy dose of halogen-lit action sequences and merry Miami Vice melodies, Contact’s restless grooves could easily be captioned “Please Jan Hammer, Don’t Hurt ‘Em.”

The keytar shredding on The Construct isn’t lifted from a sample bank. That rainbow-bright riffage comes courtesy of Zach Robinson, a one-man-band who plays like he’s Marty McFly teaching the Enchantment Under the Sea crowd about chillwave. D/A/D also dabbles in straight-up synth-pop on “Love Will Make You Stay,” a collaboration with USA Gold and Sharaya Mikael that oughta be playing over the end credits of a lost John Hughes movie.

While most artists post candid shots from the road on their Instagram, Diamondstein treats his account like an evil Pinterest board. Close your eyes while listening to The Ridges, and it’ll all make sense, as visions of Rasputin and double-exposed flashes of darkness and light dance through your head, accompanied by his dead-eyed, not-quite-dance music.

While Mark McGuire joked about getting the gang back together under a different name in a recent Bandcamp Daily story, the likelihood of an Emeralds reunion is slight. They’re busy with their respective solo records and John Elliott’s side gig running Spectrum Spools. Better to remember the Cleveland-based trio at the peak of their powers, then—beaming ambient broadcasts from deep space on the strength of a thousand synths and stacked guitars.

Lest anyone forget about the musical legacy of horror auteur John Carpenter—come on kids; dude wrote the Halloween theme!—the iconic director unveiled this collection of original compositions on Sacred Bones last year. While they were written without a particular movie in mind, you could put Stranger Things on mute and play just about any of the songs here without skipping a beat. Carpenter’s synth-driven sound is that iconic; his influence reverberates throughout the work of the other artists on this list and beyond.

As Un Autre Voyage opens, Marie Davidson tells a story about a nutjob she met at a bar who kept repeating the phrase, “we are all burning” along with riddles like, “the nature of man is to let violence win over reason.” Considering “all songs [are] based on true events” here—even the extended horror score “Kidnap You in the Desert”—it’s clear that the Essaie Pas co-founder is a living, breathing David Lynch character. Call it “Silencio” with synths.

Walls co-founder Alessio Natalizia first unveiled his Not Waving project three years ago with the neon planetarium narratives of Umwelt. Noise, techno, and ambient flourishes all play a part in the Italian producer’s solo pieces, which chart a course straight into the sun with little concern for whether it’ll all make us go blind.

Five years before he scored an opening spot for Nine Inch Nails, Daniel Lopatin was building a steady buzz with three consecutive LPs cut from the same kosmische cloth as Klaus Schulze, Cluster, and Popol Vuh. Russian Mind was where his growth spurt peaked. Much like the bedridden Brian Eno that made Discreet Music, it pulls its ambient passages from the subconscious of an ancient Russian astronaut tasked with composing a film score from his hospital bed. Or something. Just turn on, tune in, and bliss out.

Though Steve Moore’s solo discography is deep (the Zombi co-founder has scored 11 films and a TV series), two standouts include Christopher P. Garetano’s Horror Business doc and last year’s Cub LP. The latter was made for a Belgian tale of tortured Boy Scouts, making for a minimal and moody listen that slips under your skin with or without its arty visuals.

Umberto, Prophecy of the Black Widow

There was a brief window about five years ago—well before “synthwave” was a thing—where Xander Harris and Umberto seemed poised to turn Not Not Fun into an imaginary film score imprint on the strength of their two LPs. The LA label has always been hard to pin down, however, so it’s best to think of Urban Gothic and Prophecy of the Black Widow as a freakish double feature, lacing your speakers with shades of Dario Argento and Italo-disco. Their terrifying song titles (one of Harris’ standout singles is actually called “Fucking Eat Your Face”) and slick B-movie sleeves that allude to hatchets, stalkers, psychics, and skulls, make it evident that there’s blood on the dancefloor.

The synth parts on Drawn With Shadow Pens aren’t shiny and soothing; they sparkle and fade into pools of feedback and fuzz, entering the void without hesitation. Modular synthesis meet sustained menace—this is what happens when the war of the machines is won by a Belgian who understands just how theatrical one-take techno can be.

Their name is a nod to the undead narratives of George Romero and Goblin, but Zombi’s sound isn’t limited to synthetic horror scores. For more than a decade now, the duo has toyed with dynamic instrumentals—fluid recordings driven by robust drums, Rush-schooled prog-rock, and high-gloss hooks. The Zombi Anthology compiles the self-released CDs Steve Moore and A.E. Paterra sold on their early tours, connecting the dots in their sprawling discography.