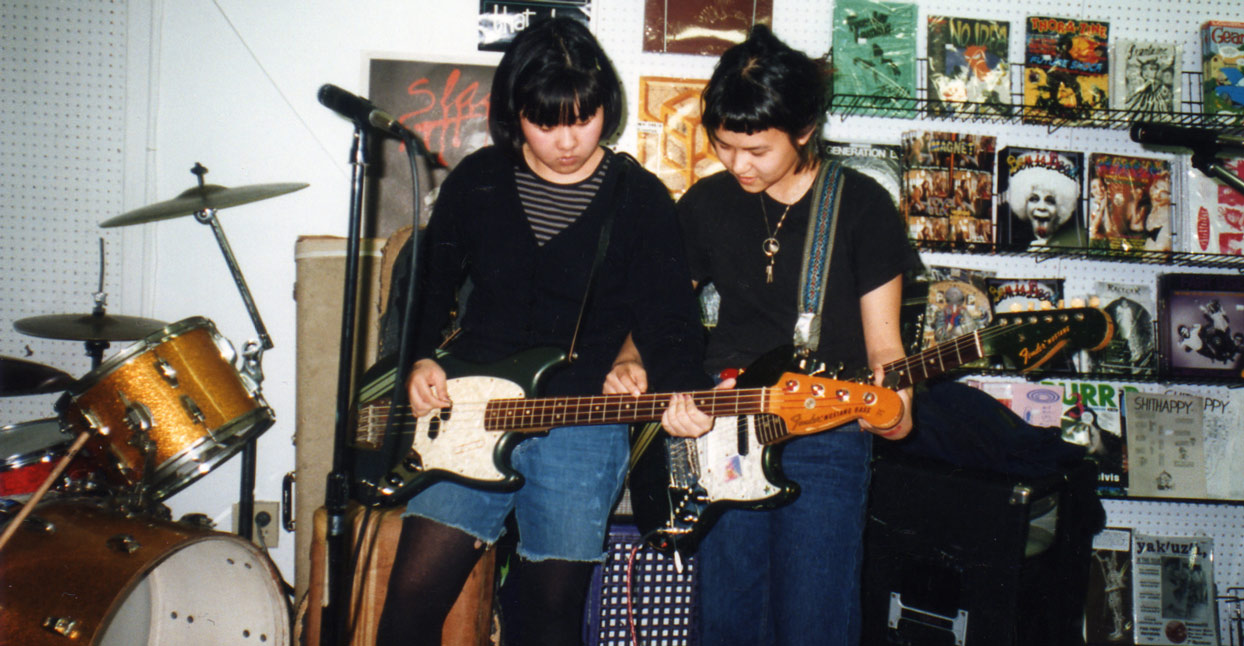 “Riot grrrl” was always tricky as a description of feminist punk music—evoking a scene that was immediately too complex to be contained to a name. But as a marker of a place in time, riot grrrl does capture that germinal early ‘90s moment when a cluster of raw, DIY, girl-dominated punk bands created possibility, showing that feminist cultural resistance could take the form of a cassette, a show, a gallery, or a fanzine. In Olympia, D.C., and the U.K., insurrectionary bands like Bikini Kill, Bratmobile, Heavens to Betsy, Huggy Bear, and Skinned Teen were actively creating a counterculture for young people otherwise marginalized in the underground. The 1991 riot grrrl manifesto stated an acute interest in “creating non-hierarchical ways of being.” Or as Bratmobile once put it: “We wanna take over the scene for girls!”

Though only a handful of bands could be called riot grrrl originators, their work illuminated a huge network of adjacent artists who shared goals and frameworks. Among them were the queercore scene, including bands like Team Dresch; the amateur indie-pop of Beat Happening and K Records; woman-led D.C. groups such as Autoclave and Slant 6; and elders in proto-riot grrrl punk poetry like Mecca Normal and author Kathy Acker. The sprawling Kill Rock Stars comps also emphasized the eclectic riot grrrl galaxy.

Deciding which riot grrrl-adjacent records are obscure enough to warrant “digging” is a bit challenging. Even the era’s classic bands can feel under-discussed musically, though in 2019, their songs are more relevant than ever—as evidenced by the setlists of Bikini Kill’s current tour, as well as a recent podcast dedicated to Bratmobile’s Pottymouth. When Allison Wolfe opens that 1993 record with the taunt “Admit it! Innocent little girls turn you on, don’t they?” it sounds like she’s cornering and cross-examining the entire capitalist system that preys on women from birth. “My whole life, I was just waiting for music to hit me this hard,” Corin Tucker recalls in the Bratmobile podcast. She channeled that fire on her band Heavens to Betsy’s excellent 1994 LP Calculated. “I will decide my life,” Tucker hollers on “Decide,” tugging each syllable with such conviction and force that it feels like gravity. “No man is gonna rule my life.” It’s a trenchant anthem for this very moment. Here is an extended soundtrack.

The origins of Emily’s Sassy Lime sound like a riot grrrl folk tale: The Southern California trio met through their local Orange County riot grrrl chapter when sisters Wendy and Amy Yao needed a ride to a Bikini Kill show at UC Irvine; Emily Ryan’s parents thought they were bringing the “classmates” to study. The band itself became a lesson in improvisation, as these three Asian-American teens pushed the punk maxim “what we do is secret” to the extreme in order to hide from their parents: borrowing instruments, rehearsing in bathrooms before shows, recording songs over the phone to answering-machine mini-tape. The shambolic sound of their wry, playful debut was a matter of necessity. “We recorded that LP while on a West Coast tour that our parents didn’t know we went on,” Wendy says, and they rushed to finish before their moms figured out where they were. Manifesting their “own language and internal fantasy world,” ESL’s goal was to self-represent. “The pathetic representations of Asians and teenagers in the media at the time made no sense to me,” Amy recalls. “We were OK with being obnoxious as a way to break up the monotony of everyday life.”

Before she was an acclaimed writer and filmmaker, Miranda July staged her own plays as a teen punk at Berkeley, Ca. venue 924 Gilman. Once she dropped out of college and moved to Portland, joining riot grrrl-adjacent bands The Need and CeBe Barnes Band, July found herself making songs like films, with ranges of characters and narrative grist. So she pushed punk further: 10 Million Hours a Mile, her startling, singular first LP, was like a one-woman play on tape—full of dark humor, vaudevillian flair, and glitchy speech.

While July says her work is never purely autobiographical, she was drawing on her reality: estrangement from her parents, navigating a painful breakup, working as a stripper in a peep show. “I was trying to figure out how to be a person,” July says, and 10 Million Hours is charged by that shaky but strong feeling of becoming in process. The title “sounds very fast, but when you think about it, it’s just painfully slow, which is kind of how life felt to me then,” she adds. Riot grrrl emboldened her to rev harder. “There was no polish, but when has that ever mattered?” July says. “The main—and only—thing you need is your voice.”

The comparatively ferocious queercore band Sister George formed just as riot grrrl hit the U.K. Though their heavy sound was more like grunge or noise rock, they found comrades in their Catcall Records labelmates Huggy Bear. Drag King opens with cheeky samples of actress Sara Gilbert in the 1992 erotic thriller Poison Ivy calling herself “the feminist poetry reading type—you know, boring” and “definitely not” a lesbian. (According to singer/guitarist Ellyott, “Our big hero was Darlene from Roseanne played by [Gilbert].”) The album closes with a blown-out take on the 1978 Tom Robinson anthem “Glad to Be Gay.” “We felt like outsiders in both the gay community and the straight music scene and our anger and dry humor reflected heavily on our sound,” Ellyott says. “We exploded this grenade of an album from the sleepy, remote East London suburbs and never played the game. Our live show hit like a meteor. We were too much even for ourselves.”

When Carrie Brownstein and Corin Tucker formed Sleater-Kinney in 1994, it felt like an explosive, alchemical fusion of their respective bands: Tucker’s vulnerable Heavens to Betsy and Brownstein’s sturdier Excuse 17. Both groups blueprinted the ecstatic friction that would become Sleater-Kinney’s signature. Excuse 17 were incendiary and thoughtful, with a cerebral punk-pop breeze not unlike Jawbreaker. The trio—which also included the singer and guitarist Becca Albee and drummer CJ Phillips—released two full-lengths at the intersection of queercore and riot grrrl: One on Donna Dresch’s label Chainsaw, and another, Such Friends Are Dangerous, on Kill Rock Stars.

Brownstein once called her songs with Excuse 17 “a sonic and lyrical purging”—confessional, irreverent, “very much laid bare.” That’s never clearer than on her throat-shredding taunt “This Is Not Your Wedding Song” or the livewire “Watchmaker”—a visceral, mocking critique of the act of mansplaining. “Sometimes a song was the first time one acknowledged a past trauma; there was an onus to share, to join in on a collective chorus of centering ourselves and our stories,” Brownstein says. “Those songs were accusations against people who had hurt us, or just a means of shouting down feelings of doubt and smallness that permeated our lives at the time.”

Lois Maffeo is mythical: The DIY singer-songwriter helped put punk-feminism into the very air of Olympia in the mid-1980s with her KAOS radio show, Your Dream Girl. Her smoggy, strummy albums are growers, but once they stick, it’s permanent. This is punk as played by a woman who would rather pull the world in than scream out to it, whose voice (she once recorded under the name “Courtney Love”) indeed contains a strangely comforting ache. Her 1996 duet with Elliott Smith, “Rougher,” is heartbreaking and essential, but Strumpet—which features members of Bratmobile, Team Dresch, and Codeine—is the definitive Lois. “My own career is based on the eradication of the guitar solo,” Lois said in the book Angry Women in Rock. “My songs don’t have to have a structure that’s already well-defined in male-dominated music.”

With Vancouver duo Mecca Normal, Jean Smith became a noted influence on the younger riot grrrl scene, known for her physical minimalism and radical-feminist poetry. After nine Mecca Normal LPs, she embarked on a solo project, improvising her nearly wordless 2000 album. Smith layered sax, piano, electric and acoustic guitar, spoken vocals, space, and drones into a collage of such colossal mysticism that Godspeed You! Black Emperor asked her to open for them on tour. “The playing isn’t about virtuosity,” Smith says. “It openly and unapologetically defies that.” She withheld any one instrument from taking over at a given point, creating a nonhierarchical sound. “The instruments I’m using are known as solo-ing instruments, but I keep pushing them into a different kind of servitude that I maintain in a less masculine way, as uniquely singular components interacting without one dominating,” she says. “Those are themes in Mecca Normal, too.”

“Is self-destruction a viable means of resistance?” Bikini Kill’s Tobi Vail speak-sings the question at the peak of “Spider Magic,” the oceanic, manifesto-like title track of the first album from her band Spider and the Webs. Since the mid-2000s, Vail has sung and played guitar in the Olympia trio alongside guitarist James Maeda and drummer Chris Sutton. The surfy Spider Magic brims with feminist literary references and Vail’s thrilling shout, as her lyrics critique nostalgia, underground scenes, and history itself. “Spider Magic” recasts the Greek myth of Arachne and Athena into a parable that speaks to a broader dilemma of artists. On “Leaving Lawrence (To His Waves),” Vail muses on the British socialist feminist theorist Sheila Rowbotham, who “had a surfer boyfriend she left behind to start the women’s liberation movement.” In classic Tobi Vail style, an essayistic footnote becomes a life-affirming punk epigraph: “It was impossible for revolutionary movements to survive in opposition to capitalism,” Vail intones, quoting Rowbotham, “unless they consciously created their own culture.”