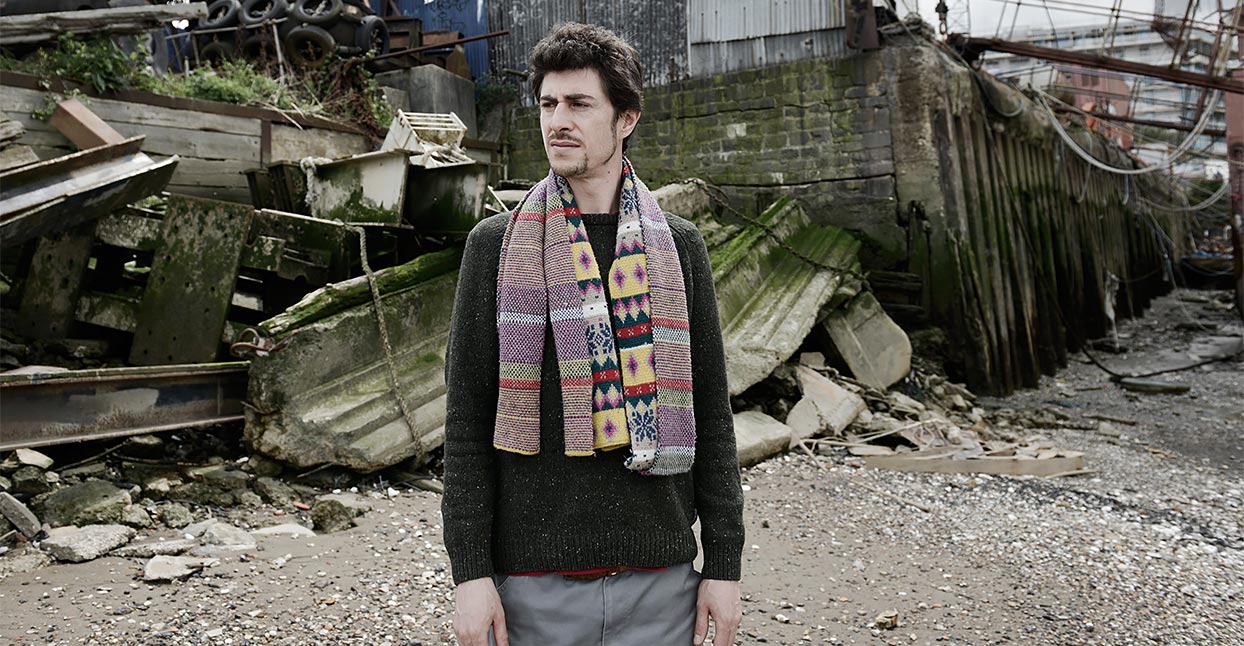 If you’ve been following rap from 2011 to now, chances are very likely you’ve heard the work of Paul White. The London producer’s name has been attached to several critically acclaimed projects in 2016 alone. This year, he released a collaborative album with Chicago art-rap aficionado Open Mike Eagle, and produced the majority of Danny Brown’s brilliantly bizarre new record, Atrocity Exhibition.

Those releases, and much of the rest of his current discography, may be rooted in rap music, but don’t pigeonhole Paul White as a producer limited to a single genre. “I love putting all sorts of different genres together [to] prove genres don’t really exist,” he says. “People think it’s one genre and they assume they don’t like it—I’m really against that.”

White’s mission is tied to his self-described hippie lifestyle in which “everything’s related, everything’s the same.” For him, that thinking goes deeper than music, but the medium just happens to be his philosophical outlet. “One thing I’ve always tried to be is really diverse and try as many different things as possible,” White explains. “It’s great to have all these different projects out there now with different sounds attached.”

He’s constructed an impressive library of releases over the years, which for some, could prove overwhelming at first. We caught up with White, who walked us through his essential jams.

All that early stuff feels like a mesh, because I had so many beats together by the time the first release came out. Those first couple years were a blur with so many different releases leading up to my debut album. “So Far Away” is a big one for me, and it gives a good impression of how much I love the real intense emotional content within a song. It was written when I was in a relationship that wasn’t going too well. You can be close to someone, but they can feel so far away from you. That record had a special emotional significance at the time, and was something I was most proud of. It felt like my soul being out there—my sound, and what I loved in music.

This was also the beginning of a special time. Me and Alex Chase, who ran One-Handed Music, were really developing our relationship together and both on a journey together, because he really wanted to start a label and I really wanted to get my music out. If someone said, ‘What should I listen to?’ I’d tell ‘em to go back and listen to [“So Far Away”] for a really early one. I can still feel the same energy in that, in the stuff I do now.

Sounds From The Skylight

After my first album, Strange Dreams of Paul White, I made Sounds From The Skylight almost as another album for myself. We decided not to put it out as an official release, because we wanted the albums to center on strong themes, and I just had so many beats so we could afford to knock out a 19-track EP.

I don’t know of many EPs that have that many songs, but I’d love people to go back and listen. It shows how much I experimented with different things; you can hear my old ambient days in there. You can really hear the music I grew up on, like the ambient and the more chill-out electronic stuff like Aphex Twin, Boards of Canada and stuff like that.

But it varies. It shows the different styles I was into and explored, mixing beats with electronic and ambient. Apart from Strange Dreams, I always felt more proud of [Sounds] because it was done quite quickly as well. The beats were all done within a couple of months, and it felt like one whole vision. It was like a real diary of what was going on in my life at the time.

Now, I have to think more about what I’m sampling and how much I’m sampling on one song. For me, Sounds From The Skylight is a really good example of how much I love sampling and chopping up five different records all in one song. I hear music as energy and vibes rather than genres, and that was a really good chance for me to mesh everything together. You have a Turkish singer vocal on a prog-rock guitar track with funk drums, and all types of things in between. There’s a lot of colors in that album.

Paul White and The Purple Brain

Purple Brain was the first time I’d worked with an MC on a track, Guilty Simpson, which was amazing. Also, connecting with Egon at Now-Again, someone I’ve respected for so many years. It was interesting because I had been making beat CDs every month from any record I ever wanted. This was the first time I had to really focus on one person’s work. That was quite a challenge, and I remember feeling at the time, ‘Damn, I’m quite conflicted, should I do this or should I carry on with this path of sampling anything?’ But it turned out to be a really good challenge to sample one person [S.T. Mikael], and it really showed how much I love prog-rock.

Purple Brain could have been totally different. I could have picked a funk artist or a soul artist to work with, because all the samples were cleared on the hard-drive Egon sent me. He told me I could just pick one person’s catalog and write anything I want.

This was my big chance to work with rappers and fulfill a dream I had for a long time. Again, I was really fortunate because of Alex, who had worked for Stones Throw and had contacts everywhere. A big part of everything I’ve done has been our relationship, because it’s enabled me to stay in the studio and be creative while he handles the other stuff.

He first played me people like Danny Brown and Homeboy Sandman, and everybody he showed me, I wanted to work with. The process started off as swaps, and it was really easy to work with Danny, who had just done The Hybrid album so he wasn’t enormous yet. The first track Danny did, “One of Life’s Pleasures,” that’s the quickest beat I’ve ever written in my life. It was like two minutes. I always thought that was pretty amazing—like, the relationship that’s lasted the longest started with the quickest beat I’ve ever done.

Almost everything was done over the internet, so everybody picked a beat and I’d roughly structure ‘em into verses and choruses and send it back. Apart from Homeboy Sandman, who actually came to London because he was doing a couple of gigs. We got in the studio together and it was great to actually vibe with him and see his great, enthusiastic energy. It was an amazing experience to work with MCs for the first time, because I had never really worked with vocals. It was a great learning experience.

This is when things started to change and I wanted to do more live instrumentation, because I had just been doing beats for so long. I remember feeling quite stuck and thinking ‘What do I do next?’

The two big things I worked on together were my Shaker Notes album and Golden Rules. We got in contact with Eric [Biddines] after hearing his planetcoffeebean 2 album, which is just amazing, and I loved the fact he was singing and rapping. And I had all these different styles of beats and I just wanted to get different stuff out.

Working with Eric was just as natural as working with Danny. We sent him over a load of music and within a week he sent back four songs that ended up being on the album, which is crazy because that never happens. It was an exciting time for me because I got to do a different approach, something more melodic and harmonic, and then work on Shaker Notes at the same time.

Some of the playing I did on Shaker Notes drifted onto Golden Rules, and that’s the first time I started feeling more comfortable doing even more varied stuff and not just beats. I was trying to expand and I wanted to play instruments again. I play a bit of everything now, but I started off playing keyboards and guitar as a kid.

It was interesting to go back into my more “rock” days, and Shaker Notes and Golden Rules started that off. It was an important time because it opened up things even more for me.

Mike [Tolle] at Mello Music Group and Open Mike Eagle, who first heard my stuff with Homeboy Sandman, got in touch and wanted to do a collaborative album. That was great because I want to do that more, just create whole worlds with one person. It’s magic, combining your vision with someone else, both of you putting your dream forward together.

I sent Mike [Eagle] a load of beats, and he recorded to one first online, but he wanted to come to London to get in the studio. So we went into a friend’s studio and spent a whole week just vibing together. It always takes a little while to do that, but it always surprises me how quickly you can get on with similarly minded people.

I could tell he was on the same vibe of creativity. And it was great to hear the first couple of songs we did, because it became clear we were going to make a record tied to vulnerability and sensitivity. We talked about theming it around that and it being like a little movie, which was new for me because I’d never done that. I’d just totally improvise with a jazz, freestyle approach.

He then went back to the States and kept recording, so he’d keep sending me vocal rough sketches over quite bare beats. I’d done the same with Danny and Golden Rules—I’ll often create a rough backbone but with enough energy there for them to record over. And then they’ll send me back the vocal and I’ll really go into it heavily.

After he’d done his vocals, I spent longer than I normally would, like six months, trying to turn it into a whole album, playing a lot more extra parts, and going to town with extra little samples. It was the most I’d ever mixed sampling with live instruments, and then I realized how much it can work.

It was another chance to put out another sound and message. And some of the beats are really varied, more than any album I’ve ever done in terms of when I made them. Some have four-year gaps between them, because I have vaults and vaults of beats, so it was interesting to hear older and newer stuff mixed together.