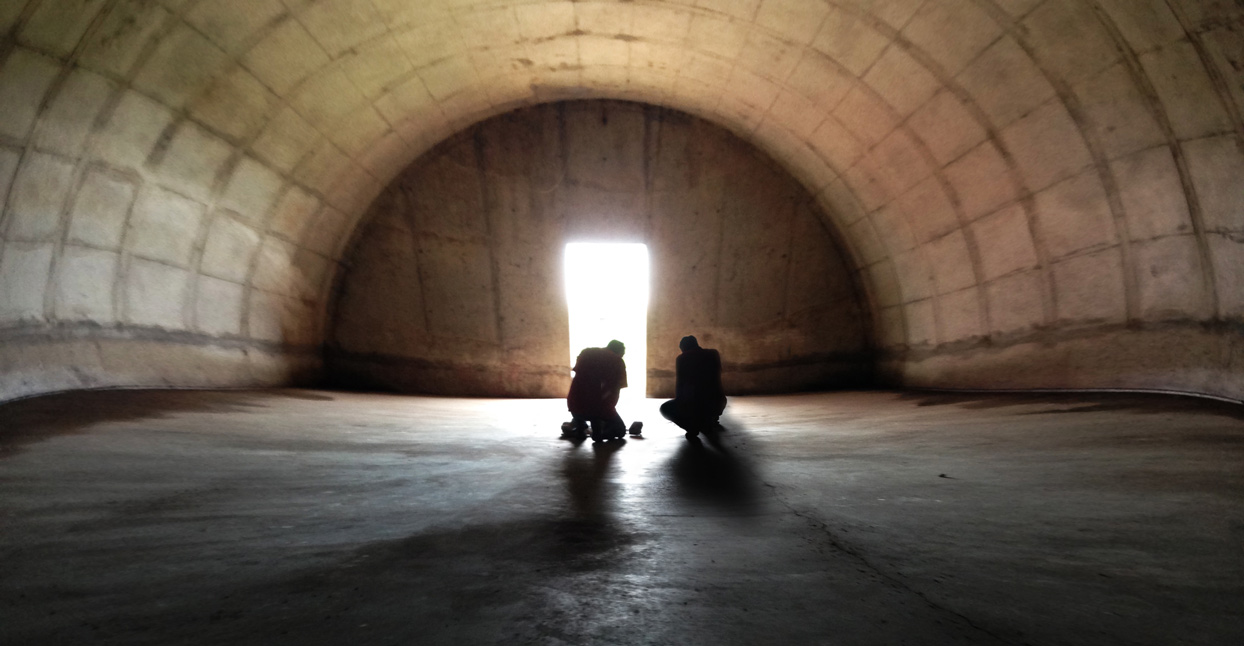 Apocalyptic thinking is as ancient as mankind; when human beings first realized there was a future, we also realized there would be an end. The Zoroastrian Frashokereti is the oldest surviving eschatology, and surely there were others that predated it. Centuries later, Europeans in the Middle Ages felt terror toward the advent of the year 1000 that was driven by a belief that the soul would continue to live after the Apocalypse. They made prophetic music, often based on the Book of Revelations, and that creative impulse was also surely not new to man, the music maker.

In 2017, our own fears of the future are different—perhaps more terrifying precisely because they are driven by very real, corporeal dangers, like environmental disaster, pandemic, and nuclear war. And instead of music about the Apocalypse, we have music about what comes after, which is not paradise but a devastated, emptied world, cold enough, as author Cormac McCarthy wrote, to “crack stones.”

And we have our own, growing tradition of music that imagines the post-apocalyptic wasteland. Aesthetically falling under the “dark ambient” umbrella, much of this is drone-based, beat-less, and lacking any obvious human presence. Some of it is made to intentionally express that humanity has no future, some subconsciously broadcast terrors from the zeitgeist, all of it reflects our contemporary expectations for the future.

Comments on the Bandcamp pages for the albums in this list reflect an unexpected inclination to use the music as an aid to relaxation and sleep, finding comfort in the enveloping chill of the sublime. This is music to read Thomas Ligotti’s The Conspiracy Against the Human Race, Jeff VanderMeer’s Southern Reach Trilogy, and of course Joanna Demers’s Drone and Apocalypse by. Thinking about the End of Time is so human, so natural, that we might as well enjoy it.

Bandcamp has a deep catalogue of and community for dark ambient music, but this flavor of post-apocalyptic music is far less clearly defined. The following is a list of some of the best examples of the style, curated from the ominous world.

The project of dark ambient musician Pär Boström, the name of this outfit doubles as the perfect distillation of its post-apocalyptic aesthetic. Over the drone, there is a compelling and disturbing cycle of sound, like metal discs rotating against each other. Is it the aftereffects of a biological disaster? But what is that echoing voice in the background? Probably nothing more than a canned announcement, looping in some darkened subway tunnel.

“Purgatorio” was released on the Malignant Records label, a leading source for dark ambient visions. The record is a landscape painting in sound—a Bosch, with all the figures erased. Yen Pox captures the moan of abandoned spaces, emptied fields, the rumbles and howls of a vengeful planet in its moment of triumph. There is the hint that some form of life endures, and it is bestial.

Herbst9 is one of the pre-eminent ensembles in this field, and this, from the album with the wonderful title, Through Bleak Landscapes, is some of the most frightening music made by mortals. Despite the utter desolation, there are indeed human hands behind this—specifically, percussionist Z’ev. The results are alien, a ritual that honors the extinction of life, made visceral by Z’ev’s exquisite timing.

Köner is a media artist who creates what he calls “auditory experiences.” In the concrete, that is the intuitive reaction to sounds, which strike a place far deeper in our lizard brains than any other sensory experience—it is the ears that catch hidden dangers, the things that go bump in the night. In this track, a crack opens in the sky. Then another. What is about to come through is something we should flee from—now, and desperately.

MULM is a collective formed by ambient musicians Northaunt, Avsky, and Taphephobia, and the group is released via the Cyclic Law label, just like Cities Last Broadcast. This album, The End of Greatness, is a sonic memorial to those who had made an impression on the Earth and then disappeared. A woman sobs in grief, dark clouds hang overhead, something mourns, something else chatters; perhaps it’s the vultures.

In more—optimistic? innocent?—times, Kraftwerk sang “Radioactivity / It’s in the air for you and me.” In the near future, only the winds are left to sing, as they swirl the radioactive particles through the air. They also carry the squeak of hinges, flapping in the breeze, and what might be screams, embedded via some unfathomable sub-atomic process in the poisonous glow.

The multimedia equivalent of Walter M. Miller Jr.’s classic novel A Canticle for Leibowitz, Fossil Aerosol Mining Project began in the early ’80s, uncovering relics from the lost civilizations of abandoned shopping malls and failed suburban developments. Archeologists of the future, they stitch together fragments of media and produce the wondering, uncomprehending question of “Who were these creatures who left behind these mountains of stuff?”

Kolhoosi 13, “From Comradery to Sustenance”

Opening with a fragment of a radio broadcast, perhaps from the still-running automation of an abandoned station, the music quickly dives into the depths of devastation. The earth rumbles and there are distant gunshots and explosions. This is the soundtrack to the last throes of genocide, one of dozens of dark ambient recordings on the Cryo Chamber label.

The chill of absolute zero with the insinuating, disturbing sounds of…something bubbling up all around. This collaboration between two masters, Robert Rich and Brian Williams, aka Lustmord (essential to the creation of the dark ambient genre), is their response to Andrei Tarkovsky’s film, Stalker. For Rich and Williams, the post-alien-event landscape has become part of a terrifyingly cold, alternate dimension.

Mathieu imagines the dreamscapes of the Nostromo crew members from the movie Alien. Each character bathes in the warmth of their cryo-sleep cocoons, lulled by alternating sweeping waves and the electrical and machine buzzing of the spaceship. Kane is the executive officer, and first to die, but not before sharing “I remember some…horrible dream about smothering.” This track is a prelude to evisceration, and to what the larger narrative hints at is the extermination of the human race.

April Larson, “Up Below”

Perhaps the philosophical apex of the post-apocalyptic aesthetic, Larson’s latest release explores the limits of emptiness, something like the sonic equivalent of the descending staircase in Mark Z. Danielewski’s novel House of Leaves. The title track presents the alchemical paradox of how absolute nothingness can be so full of sound, and it’s all so unsettling.

Mariela Arzadun takes an intimate view of emptiness; her depopulated spaces are interiors. Abandoned power plants and factories still hum as the dynamos run down, the walls of smaller rooms preserve the vibrations of past activities. Or maybe these are the endless corridors of the machine being in Harlan Ellison’s classic post-apocalyptic story, “I Have No Mouth, And I Must Scream.”

The man-made apocalypse touched down in Japan in August 1945, and has been fundamental to modern Japanese cultural expression, giving rise to Butoh and the specific genre of Japanese monster (“kaijū”) movies. These kaijūs like Mothra and Gamera destroy the country’s cities in a kind of sonic cleansing and resurrection—the remnants of past music rise through the dust into a sunshine that illuminates the empty, burned city below.