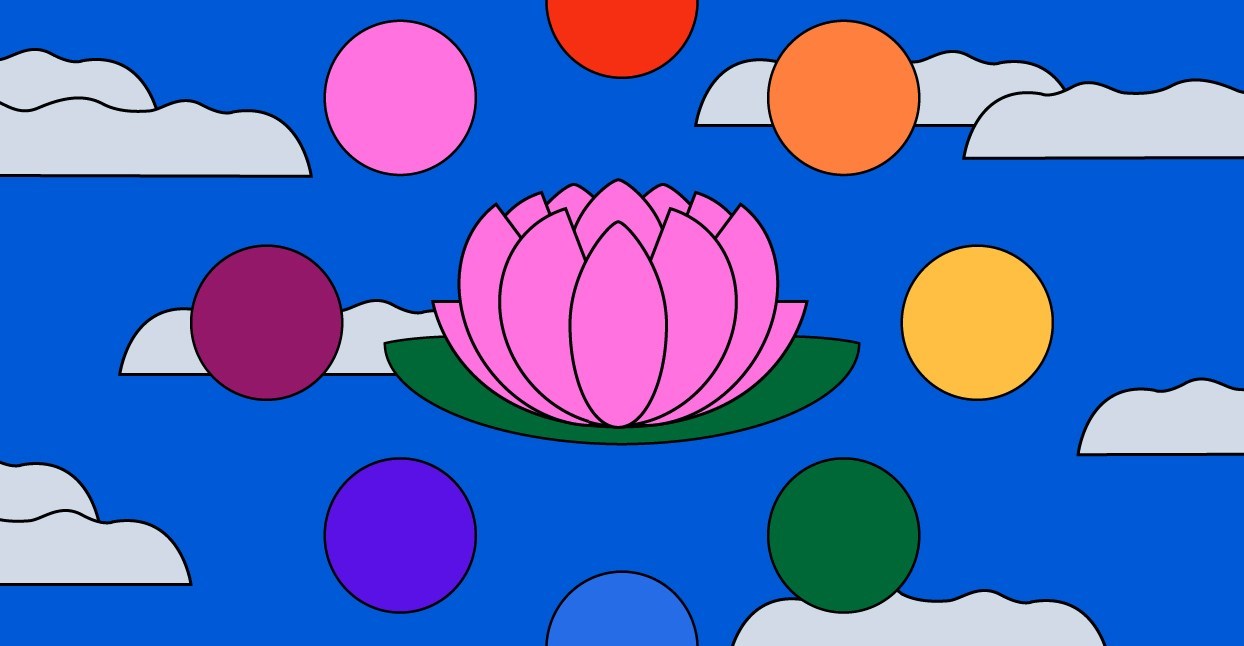 This was supposed to be one of those eight-hour nights of sleep. You were in bed by 10pm, but now, as you reach for your phone for the third time, the device stoically informs you that it’s 12:46am. Maybe you flick open a popular meditation app (it rhymes with deadspace) and wait for the man with the ever-so-slightly British (or is it Australian?) accent to talk to you off the ledge. But this time, he’s not helping; neither is your brain, which continuously presents you with items to add to your daily to-do list, offering worst-case scenarios for the stressful day that’s now just a few hours away.

Sound familiar? In this era of non-stop connectivity, the constant barrage of information is nearly impossible to tune out. Your phone, which is likely the culprit of your anxiety, is, in a cruel twist of fate, also your alarm clock. We have become a well-connected society of masochists who are unable to relax.

There’s no choice, then, but to turn to the experts: The composers and musicians in the business of making music specifically designed to help you disconnect, unplug and, eventually, calm down. These are the people who have found enough peace that they can share it with others. They make spoken-word guided meditations, 30-minute ambient tracks, songs with Tibetan singing bowls, meditation for aligning energy, sleep aids—the list goes on. After spending a few weeks rooting around in the meditation tags on Bandcamp, I’ve discovered that there truly is a path to peace for everyone.

In trying to get more insight into “meditation music,” I sought out musicians who specifically intend their music to be used in a guided meditation practice (as opposed to, say, a terribly amateur ambient track that happens to put you to sleep). As someone who finds it very difficult to meditate—if I do make it to a yoga class, I always dip out before the meditation because I have a more pressing engagement, like meeting friends at a bar—I was eager to know exactly what this word, “meditation,” means to people who practice it. “Meditation starts at a point where you let yourself go, and where you fall into a deep inner peace,” says an artist who goes by the name Jaja. “Time and thoughts disappear, and the only thing which remains is space.”

Randall Taylor, of AMULETS, describes the practice succinctly: “I think a big point of meditation is taking time to be mindful and to take care of one’s own mental well-being. Our collective minds are restless and constantly over-stimulated. Meditation, especially with sound or music, allows us to reach new levels of true relaxation and serenity.”

The practice of meditation and mindfulness is often associated with Eastern religion and medicine (The Buddha was one of the first teachers of meditation), but the West is finally catching up. A study published by Harvard researchers at Massachusetts General hospital in 2011 found that, “Although the practice of meditation is associated with a sense of peacefulness and physical relaxation, practitioners have long claimed that meditation also provides cognitive and psychological benefits that persist throughout the day.” And who doesn’t want cognitive and psychological benefits?

As a practitioner of Tibetan Buddhism, the composer Gregory Rosa meditates so that his mind can, “experience its inherent clarity and stillness.” Rosa says the process gives him, “a foundation upon which [he] can further explore the subtleties of this whole awareness experience called life.” Aside from his commitment to Buddhism, Rosa, “was initially inspired by the works of Steve Roach and Brian Eno, who use the studio creatively—as an instrument, as part of their process.” In fact, it’s hard not to think of Eno when you hear the word “ambient,” but Eno poisitioned his atmospheric albums (Discreet Music, Ambient 1: Music for Airports) as background music, compositions to accompany space, not necessarily to help the human mind relax. The now-legendary liner notes for Ambient 1: Music for Airports stated that the music, “must be as ignorable as it is interesting.” And while Eno didn’t create his work to accompany a meditation practice, it has inspired many who intend their work to do just that.

Eno’s gospel of ambience can be directly felt in the work of Andrew J Klimek, the founder of Ambient Sleeping Pill (a looping stream of his curated ambient playlist). His philosophy echoes Eno’s. “I want to release all kinds of music under the common goal of creating a positive space,” he says, “music that can serve as an uplifting or calming background to whatever you’re doing throughout the day.” Klimek started Stereoscenic Records as a way of filling that silence. He also has strong opinions about music made specifically for sleeping. “The most common problem I find with music that would otherwise be great for sleep is they are too midrange-heavy, which is especially annoying on small alarm clock speakers,” he says. “Most people know that brown or pink noise help with drowning out noise—it’s similar to having a fan in your room. I find that music with similar spectral density works well also.  So, ideally, there would be a nice steady rumbling in the bass, some soft hissing in the high end, and no big spikes in the midrange.”

According to Rosa, certain sounds have specific qualities that make them well-suited to meditation. “The sounds I record are free-floating,” he says. “They don’t have a specific beat or rhythm behind them.” He describes his “Tara Songs” as “having a long wave form that’s similar in length to your breath when you’re relaxed. So, in that way, they have a calming effect, somatically speaking. It’s the same way a thriller movie soundtrack will subtlety start to pick up the tempo during a chase scene to get your heartbeat going, only in reverse.”

William W0lford composes music specifically for energy alignment (the practice of using vibrations to align the body’s energy) based on findings in his work with a guru of sorts named Cheryl Jensen. At the core of each piece of Wolford’s music is a recorded ‘energy track,’ which is, “an important, rather cosmic, distinction to my music which helps make it meditative.” He continues, “yes, the music is pleasant and harmonious and mellow, just like most relaxing meditative music is. And relaxation is the key to being able to meditate well—that is why Yoga was invented: To relax the body in preparation for meditation. Not to look good in Lululemon yoga pants!” Somewhat paradoxically, however, when Wolford himself meditates, he prefers silence. “I don’t actually listen to my music,” he says, “I do it silently. But my music can help a person get into a state of meditation where, if they want to sit silently, it will be easier for them.”

In confessing his preference for silent meditation, Wolford also raises another key point about relaxation: that the appropriate methods vary based on the individual.  An artist who simply goes by  “Calm” says that there are relaxation “triggers,” and that these sounds, images, or thoughts vary greatly from person to person. “I use only acoustic instruments from the world, like rain sticks, Tibetan and crystal bowls, shamanic drums, and kalimbas that have natural healing vibrations,” he says. But other people need to be bludgeoned with relaxation. “Many people need louder, stronger shaman drumming, which can silence the always-on, analytical, rational mind,” Calm says. “I have very good feedback with this.”

But meditation, like faith, is something from which you can’t expect immediate results—something I have come to learn night after night. The anecdote that began this story is not fiction or conjecture; it’s a fairly accurate description of my routine three to four nights a week. I’m so desperate to meditate that the very practice of it stresses me out. When I ask if meditation is something that can be taught, composer Ian Becker suggests looking to literature to find the type of meditation that’s right for me. For him, it’s Alan Watts, Thích Nhất Hạnh, and Pema Chödrön. His New Music for Bathing and Other Contemplative States album is where I decide to begin. As a bather, I found Ian Becker’s work intriguing. “With New Music for Bathing, I wanted to create a work that rewarded an attentive but calm listener,” he says, “having subtle movement through the arc, while giving space for the listener’s cognitive activities. The title was a way to tip off the listener to get comfortable and still the body in preparation for the experience—and it could indeed be used as literally implied.” I decided to give it a shot, but was too worried about drowning and water temperature to find any peace.

After testing almost 50 albums of sleep, relaxation, and meditation music, I found that my “trigger” is rooted in my literature preferences: we’ll call it sci-fi and fantasy. Compositions that reminded me of a galaxy far, far away, or Middle Earth, took me to a place that was as close to relaxation as I think I’ll ever get. Jaja’s celestial orchestration made my body feel as if it was being lifted, gently falling through space. The compositions build at an achingly slow pace, forcing my overactive brain to be patient.

Jaja paints her cosmic maps with synthesizers—specifically, a Roland JD-800 and Roland XV-88. “Because I play live, a tone will never be same,” she says. “I am using reverberation, space, and velocity very intensively. For that, I exclusively use hardware synthesizers and outboard effect processors. I need the direct contact with knobs, faders, and buttons. That gives me the freedom to unfold entirely. I let myself fall completely and experience pure meditation, when I create music.”

Back on earth, Natalie, a composer who records as Faerie Hollow, uses field recordings to ground her ethereal compositions. “I was always very drawn to nature,” she says. “The feeling of being connected to the earth, and the feeling of peace that would overcome me when I was out in the elements.” Her experiences are directly felt in her composing process. “When I was playing this music, I felt like I was stepping into another world,” she says, “An enchanted forest, where you may just hear a Faerie or two.”

Andrew Klimek of Ambient Pill Radio (which did, in fact, help me fall asleep) says that, “silence is often just as distracting as noise. With sleep music, we try to find the perfect balance—something you can sort of lose yourself in, but that won’t be distracting you with beats, melodies, or unexpected changes.” (Side note: I also found meditation for dogs helpful. Its cheerful bell tones elevated my mood, and though I don’t think I achieved a meditative state, I did have a very pleasant daydream of walking along a beach with a black labrador puppy.)

Meditating to music requires surrendering judgement: not only putting aside your skepticism of New Age philosophy, but also realizing that frustration at your own frantic thoughts and stress is harmful. Meditation takes patience, practice, and self-respect. I like Ian Becker’s suggestion of spontaneous meditation: “I may be anywhere during the day. When I begin to feel a moment of clarity from thought, I make an attempt to ‘go with it,’ and keep the clarity held for as long as it lasts.”