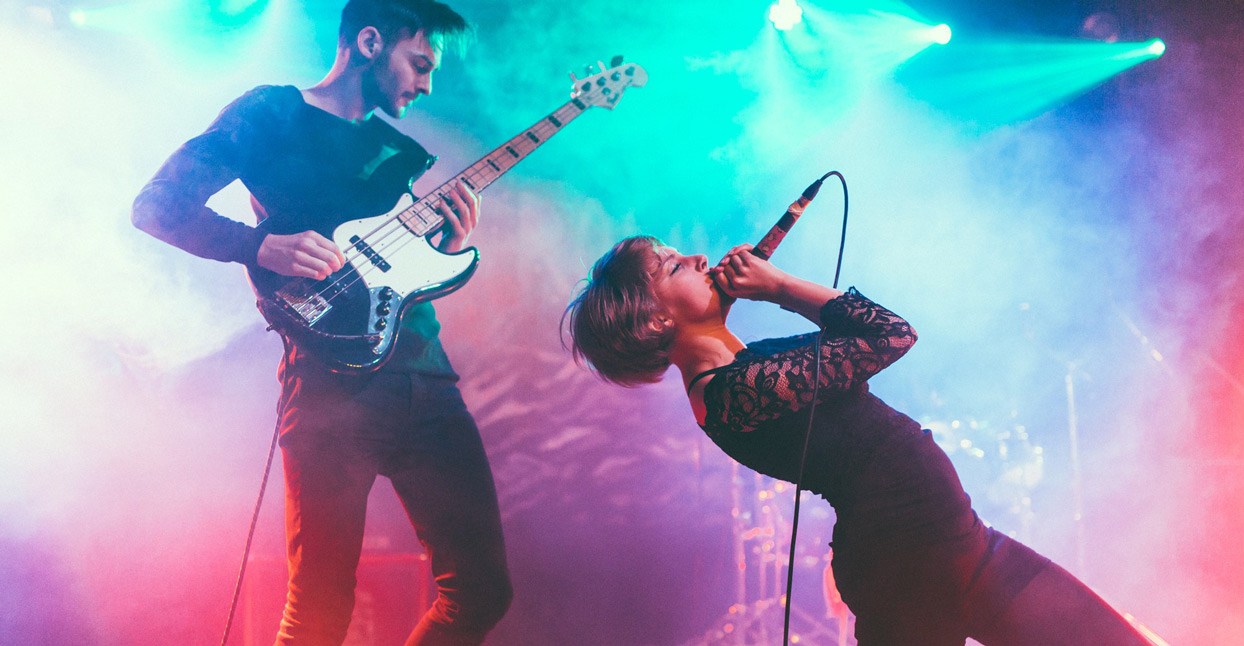 If post-hardcore’s experimentation was an artistic rebellion to its predecessor’s rigidness and ultraviolence, then mathcore was the same mutiny taken one step further. Bands pushed the limits of both heaviness and virtuosity, injecting stronger influences from metal, fusion jazz, and—obviously—math rock. Crowds also brought back the chaotic violence, with swirling mosh pits and daredevil stage dives, mirroring the music’s intensity.

The first band to predict the spirit and sound of mathcore was Canadian power-trio Nomeansno. The group were contemporaries of Black Flag and Minor Threat, but their irregular rhythms and goofy sense of humor made them an outlier of the early hardcore punk scene. The early ‘90s also saw a handful of bands push their sound into territories much more esoteric than their peers, most notably San Diego’s Drive Like Jehu and St. Louis’s Dazzling Killmen. The former showcased shrieking vocals, scattershot song structures, and dissonant chords while the latter’s jazz-school pedigree and claustrophobic compositions rendered them a shocking curiosity.

While those groups set mathcore’s foundation, it wouldn’t be until several years later that a distinct scene took shape. Some bands accepted the title, while others rejected it, but these forward-thinking musicians established a rich tradition of rejecting genre stereotypes and embracing the unexpected.

Here’s an overview of mathcore’s history, shown through 10 essential albums that either shaped the subgenre or took it into new and exciting directions.

Botch
We Are The Romans

Formed in 1993 by a bunch of snarky egg-headed teens, Tacoma’s Botch quickly subverted expectations of what a hardcore band should sound like. You can hear all of that on their second LP, 1999’s We Are The Romans. The nimble riffs favor angularity over impact, and the lyrics and song titles eschew hardcore’s clichéd preachiness for self-effacing comedy and biting satire. From the demonic waltz of opener “To Our Friends in the Great White North” to the Gregorian chant that closes the album, We Are The Romans is a perfect blend of aggression and zaniness that has been often imitated, but never replicated.

The first band to fully set the bar for mathcore’s disorienting technicality was New Jersey’s Dillinger Escape Plan. Calculating Infinity, their 1999 debut, borrowed heavily from both grind and early metalcore, but it was the infusion of Latin polyrhythm and Warp Records electronica that made it something truly original. Drummer Chris Pennie’s skittering playing brought a human edge to Aphex Twin-style breaks, and Ben Weinman’s dense guitar work gave mathcore one of its first iconic riffs: the disgusting intro to “43% Burnt.”

Established in 1990 as an artsy metalcore outfit influenced by the likes of Integrity and Neurosis, Converge became quick favorites amongst punks and metalheads looking for something both heavy and heady. While arriving in 2001 and marking Converge’s fourth full-length release, Jane Doe was the first to properly synthesize their trademark sound: caffeinated drumming, shimmering guitar work, jarring rhythmic shifts, and gut-wrenching lyrics delivered by frontman Jacob Bannon’s tortured squawk.

Formed in 2001 as a left-field grind band, Rhode Island’s Daughters are best known to today’s crop of indie-heads for last year’s You Won’t Get You Want, a grotesque slab of industrial post-punk. Their 2006 LP, Hell Songs, sits somewhere between the two, showcasing breakneck stops, frontman Alexis Marshall’s gloomy wail, and some of the wackiest guitar work ever recorded. Guitarists Brent Frattini and Nicholas Sadler rarely strum proper chords, instead tapping and discordantly sliding their fretboards to make one hell of a racket.

If there was an album that exemplified what mathcore could do in the post-genre era, it was Protest The Hero’s Kezia. Leave it up to five Canadian wunderkinds to combine influences from Fat Wreck Chords skate punk, European prog metal, and high-concept Russian literature and have it all make sense. The album’s SikTh-meets-Propagandhi fusion is a far cry from Botch and Converge’s brutality, but its neo-classical elements and operatic vocals showed that mathcore didn’t have to be ugly.

The Number Twelve Looks Like You
Nuclear. Sad. Nuclear.

While plenty of mathcore bands wear their jazz-fusion influences on their sleeves, perhaps none did it as blatantly as New Jersey’s The Number Twelve Looks Like You. Toeing a bizarre line between the avant-garde and skinny-jean screamo, TNLLY’s Nuclear. Sad. Nuclear. showcases a band giving zero fucks towards genre orthodoxy. Lead track “The Devil’s Dick Disaster” runs from flamenco to technical grind to swaggering prog rock all in the course of a few minutes.

Formed in 2005 by brother-sister duo Eva and James Spence, this Sheffield quintet’s early material blended hardcore with kitschy synths and nonsensical song structures. However, the group shaved off its more oddball qualities in favor of shoegaze and dream-pop on subsequent releases. This sound is beautifully demonstrated on 2015’s Grievances, where Dillinger-style freak-outs transition to lush soundscapes at a moment’s notice. Anchored by the siblings’ complementary singing voices, the group perfectly blur the barrier between tranquility and destruction.

Offering a sound that sounds like a combo of prog-metallers Car Bomb and an actual bomb, Frontierer use the guitar less as a musical instrument and more as a tool of war. Their debut album, 2015’s Orange Mathematics, mixes dizzying chugs, laser-beam squeals, and ear-tearing pick scrapes to create a venomous brand of future-punk well worth exploring.

The Armed
ONLY LOVE

Pseudo-anonymous Detroit collective The Armed specialize in two things: crazy music, and even crazier offstage antics. It’s easy to let the latter overshadow the former, but if there were any doubts regarding the group’s dedication to musical experimentation, they were quickly quelled by 2018’s masterful Only Love. The whirlwind grooves of mathcore might be soldered into album’s DNA, but it’s the cyberpunk synths, atmospheric flourishes, and occasional pop melodies that make it an otherworldly listen.

SeeYouSpaceCowboy
Songs For the Firing Squad

With their wordssmushedtogether name and sarcastically verbose song titles, San Diego’s SeeYouSpaceCowboy most certainly parade their influences. However, just one listen to Songs for the Firing Squad, and it’s quickly apparent this is no simple nostalgia act. The 2019 compilation shows off an intoxicating mix of repulsive riffing, pummeling drums, and even the occasional cheeky dance-punk lick. Additionally, their overtly political lyrics stand out among a scene that often values challenging musicianship over challenging the status quo.