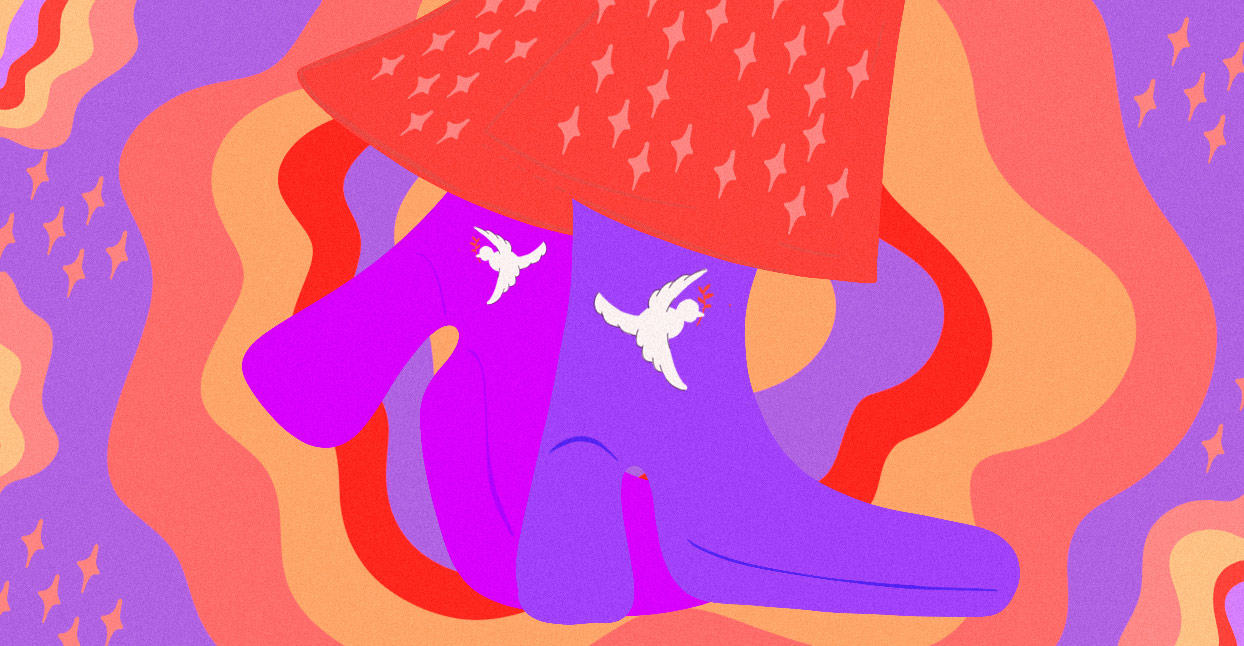 In Glastonbury 2013, deep into a Sunday morning in the hot and steamy NYC Downlow tent, DJ Greg Belson took the hedonistic crowd to church. The soulful, devotional tracks that made 2,000 euphoric dancers joyously raise their hands were originally recorded in the mid ‘70s when disco dominated the charts. But these songs weren’t recorded to soundtrack the cocaine- and sex-driven dancefloor of Studio 54. These singles were laid down in dedication to the Lord.

Now, thanks to the Belson-curated compilation Divine Disco, as well as shows by Floating Points on NTS and The Showfa on Worldwide FM, there has been a steadily swelling interest in this specific strand of dance music. What, exactly, is “gospel disco”? On a recent visit to London, the L.A.-based Belson explained it to me. “In its purest form, it’s music made for the dancefloor, mainly by the younger generation in the church. It would have been frowned upon by many of the elders, who thought of it as the devil’s music, with its 4/4 sexy beat that was associated with drug culture. So I think of it as a shout-out by the younger people in the congregation.”

The sound of gospel in clubs is nothing new. The Joubert Singers’ “Stand On The Word,” an anthem for Larry Levan at Paradise Garage and David Mancuso at The Loft in the 1970s, became to gospel disco what MFSB’s “Love Is The Message” was to the broader scene. “That is, without a doubt, the most influential gospel disco record,” says Belson. “It really does provide a snapshot of what this music can do.”

It was through groups like The Staple Singers and Mighty Clouds of Joy that gospel first bridged the gap between the sacred and the secular, with releases in the early ‘70s for major labels like Stax and ABC that were aimed firmly at the dancefloor. Much of the gospel disco sought after by collectors like Belson was released in small runs on independent and private press labels like Crusade Enterprises and Pray Records. “I can come across gospel disco tracks on major labels like Savoy, Nashboro, and Peacock fairly easily but what I like looking for are the really small independent labels,” says Belson. “For example, there was a record on the second Divine Disco compilation by Mr. Jesse R. McGuire that was only pressed on 50 copies to be handed out to the small congregation. That’s why a lot of these records are so tough to find.”

A serious collector of soul and jazz through the ‘80s, the future gospel aficionado recalls his induction to the genre. “In 1994, I was running a club in Teddington [in South West London], and DJ Snowboy played this new discovery which was ‘Sometimes I Feel Like a Motherless Child’ by Clarence Smith, and I was blown away,” he says. “That really was an epiphany for me.”

At the time, Belson didn’t make the connection that this was a gospel record. “It wasn’t until a digging trip to the Midwest that I found a 7” on the Shur-Tinga label by The Lovers of God called ‘We Shall Thank The Lord.’ That’s when it eventually clicked, and I thought, ‘Ah, these are actually gospel records,’” he says. At the time, gospel wasn’t on the radar of any of his contemporaries in the collectors’ scene. “To begin with, it really was a solo journey,” he recalls. “Gospel was the last genre to be explored by dance music collectors. There was always this stigma about it, which I thought was a real shame, as people were missing out on so much great music.”

With the onset of the Internet, Belson started to discover more and more up-tempo gospel records that worked on the dancefloor, which led to being him invited to play his 100% gospel disco set at NYC Downlow at Glastonbury. “There were a number of tracks played that ignited the room, like the Johnson Family Gospel Singers’ ‘Imitations’ and Betty Griffin’s ‘Free Spirit,’ both of which have now reached classic status within that amazing space,” he recalls.

Belson’s pursuit of godly disco records can be tracked via his long-running monthly radio show Divine Chord on Dublab, as well as his second compilation for the Cultures of Soul label. Greg Belson ‎– Divine Disco Volume 2 (Obscure Gospel Disco – 1979 To 1987) ranges from raw R&B and heavy disco to funky synth led boogie and ’80s modern soul. It’s proof of how gospel disco crossed genres and decades—as this snapshot of records available on Bandcamp shows.

The Joubert Singers
“Stand On The Word”

Originally recorded under the name Celestial Choir as part of a private press LP for the congregation of Brooklyn’s First Baptist Church of Crown Heights, “Stand on the Word” was discovered by Christian convert and producer Walter Gibbons. Larry Levan heard the track at the Rock and Soul shop on 7th Avenue in NYC, where Gibbons worked. Released as The Joubert Singers after the choir’s Phyllis Joubert, “Stand On The Word” was remixed by Tony Humphries and made famous by Levan at Paradise Garage. “There have been a slew of mixes released over the years, but in my opinion the finest version was released on the U.K. TEN label on a 45RPM single,” says Belson.

This stone-cold funky gospel disco killer is taken from the rare 1980 LP of the same name recorded by Betty Griffin for the sought-after soul label Mopres Records. “This one’s a really big sound for the dancefloor, and first started to get some serious recognition at the NYC Downlow in 2013,” says Belson. Thanks in part to Belson, as well as spins by Horse Meat Disco, the Free Spirit LP now changes hands for around $100. It’s also available on a lovely loud press red label 7”—if you can find one.

This lovely piece of modern soul disco from 1983 out of Memphis is one of Belson’s most obscure finds. “It’s a super rare 45RPM single, self-released on the band’s CFC Ministries label,” he says. A standout on the second volume of Divine Disco (and there are many), it remains one of Belson’s most treasured gospel disco 7”s. “This was one of those lucky eBay purchases from back in the day,” he says. “No other bidders, no soundclip, just a wild semi-educated punt that turned into gold.”

Calvin B. Rhone
“I Believe”

Another label to reach into the more obscure corners of disco is the excellent French imprint Favorite Recordings. Their label founder—and serious digger—Pascal Rioux, aka Charles Maurice, was responsible for uncovering this gospel boogie rarity from 1983. Appearing on the Private Press album Intimate Friend, it was the work of one Calvin Bernard Rhone, a Los Angeles minister whose Leroy Burgess style vocal matches the classic ‘80s production. “This is a popular tune on my more discerning dancefloors, leaning more towards that boogie sound, and clean production with a simple synth riff that’s so infectious,” says Belson.

The Inspirational Souls
“Jesus Is Going Away”

One of the most prolific of all the small gospel labels, Crusade Enterprises was founded in 1962 by evangelical Christian Ray Harris. The label released nearly 300 records from their base in the small town of Flora, Illinois, most of them recorded at their own Crusade “Sonic Sound” Studios.  Formed in Chicago in 1962, the four-piece vocal group The Inspirational Souls recorded their debut LP God Put A Rainbow in the Sky for the small gospel label Starway Records before their only album for Crusade. It opened with this storming vocal disco track that Belson always carries with him wherever he plays. “It’s a perfect example of raw gospel production, melding nicely with the 4/4 driving disco beat,” he says.

Formed as Soul Struts, later becoming 3rd Creation, and finally 9th Creation, this group were formed in Stockton, California in 1970. Debuting in 1975 with the LP Bubble Gum, they are best known for their soul and funk breaks as sampled by Pete Rock & C.L. Smooth, Quasimoto, and 3rd Bass. They followed this with what would become the most elusive and expensive record for New York disco and boogie label Prelude Records. Reissued by Chicago’s Still Music (under their Past Due subsidiary) this swirling piece of soulful gospel disco came from that LP, and is a firm favorite of Belson’s and other DJs with a taste for gospel like Red Greg.

Herman Harris
“Give Yourself to Jesus”

This slow, brooding piece of devotional soul, featuring the soaring vocals of Renee Cole, appeared on the B-side to a 1977 single on the band’s own label V.F.H.L. (Voices of Faith, Hope and Love) Records. After discovering the single, Belson put it in regular rotation on his Dublab show. He was blown away when the man responsible for this gospel gem contacted him out of the blue. “Mr. Harris was amazed to learn that it’s one of my favorite gospel tunes,” says Belson. “And when I was able to source an original copy for him, he was so humble and grateful.”

In the 1980s, gospel artists moved from a more R&B-rooted disco sound into modern soul and boogie. New York band Wisdom debuted in 1975 with the percussion-frenzy track “Nefertiti,” released on the Creative Funk subsidiary Adelia (also home to New Horizon’s “True Love”). Taken from their private press LP Dreamer from 1985, “Change” is the gospel boogie classic you didn’t know you needed. If you haven’t  got the $300 for the original LP, the track can be found on Volume 2 of Divine Disco. “It’s a tough rarity that is well worth tracking down for both the music and the amateur-ish—yet delightful—cover art,” says Belson.

New Creation
“Ain’t No Right Way To Do Wrong”

In addition to his Divine Disco series, Belson also compiled The Time for Peace is Now for the Luaka Bop label, for which he selected gospel tracks with a message directed at the community rather than the congregation. Released in 1982 as a private press single recorded in Winston-Salem, North Carolina, this conscious slice of boogie/soul/funk was the work of one Rudolph C. Thomas Jr. The original pressing is currently the object of a mass search by a growing number of collectors. “Here’s a sound that’s increasingly popular in Europe at the moment, with a bulk if inquiries about it coming from France,” says Belson. “It’s really hard to locate on an original 45—but well worth searching for.”