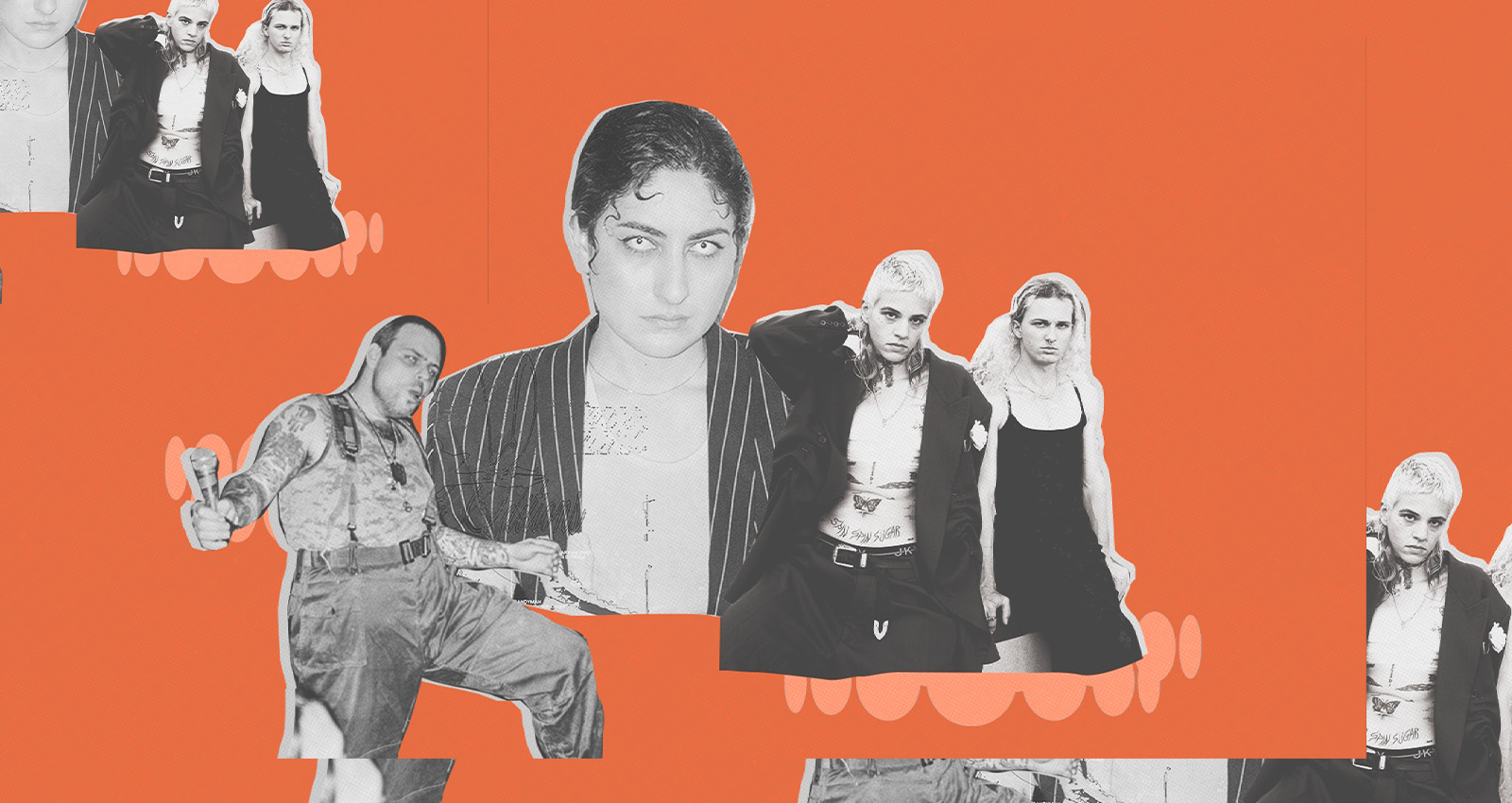 It’s not surprising that the birthright of such an abrasive and ambitious genre lies in Berlin. Initially self-categorizing under the “breakcore” tag, Alec Empire (of foundational digital hardcore outfit Atari Teenage Riot) coined “digital hardcore” at the outset of his label Digital Hardcore Recordings. From there, the genre slowly trickled out from Berlin, fertilizing a groundswell of electronic artists in Europe and beyond.

With the recent advent of cyberpunk nostalgia and loop-crunching hip-hop, digital hardcore is finding a new breath of relevance in a world teetering on the cliff’s edge of dystopia. These seven artists have capitalized on its power while carving their own grooves in the ground floor.

Deli Girls
I Don’t Know How To Be Happy

Since their 2018 inception, Deli Girls have chopped and screwed radical leftist rage into a baneful carnival of horrors. On their second LP for NYC label Sweat Equity, the duo double down on their hotheaded noise with stacked overdubs and studio processing. Unleashing mercurial fury, Tommi Kelly’s agitated beats and Danny Orlowski’s tonsil-raking yelps are wielded with search-and-destroy precision. Loaded with ACAB jabs (“Officer”), power-and-control tirades (“Peg”), and chronic pain (“Abortion”), I Don’t Know How To Be Happy is a thesis on modern manias.

With their sophomore effort World Wide W.E.B., cyberpunk outfit L.O.T.I.O.N. Multinational Corporation proves that it’s still possible to crack a smile as the world burns. The record laughs dystopia in the face, alongside a cohort of “gabber punks on dabs” and “remote-controlled surveillance bots.” While the apocalyptic imagery has long lingered on the L.O.T.I.O.N. agenda, they still find room for experimentation: “Unplugged” is an industrial banger, and “I.C.B.M.” finds the outfit comfortable with sluggish tempos and velvet rope glamor. Throughout the World Wide W.E.B. LP’s 25-minute runtime, Vocalist Alexander Heir waxes on the typical modernist paranoia themes—Big Brother, sailing missiles, and gang stalking—while making the fear feel new.

A crown jewel in Kris Esfandiari’s vault of alter-egos (she also performs under the monikers King Woman, Sugar High, and Dalmation), NGHTCRWLR is a Frankenstein amalgam of trap, hardcore, and electronic. Donning white-out contacts and carrying a sheaf of brutalizing character studies, NGHTCRWLR summons God-fearing rapture with sputtering 808s (“Nation Under Creep”), grave rave drops (“Let The Children Scream”), and loops of children’s laughing (“Candyman”). Inspired by Christian brainwashing videos, ventriloquism, and Psalty the Singing Song Book, Let the Children Scream is a sinister docudrama proving that the kids are not all right.

With a vast five-year catalog spanning diarific ambient collections (guts), gauzy chillwave (The Texan Temples), and “dirty south” rap (EXCESS), dabbling in digital hardcore was inevitable for Dallas producer James Gorczyca. Even more surprising is that the creative reinvention is the most successful of his experiments with aggro-pop and post-industrial wallop. Still channeling his clipped rap vocal delivery (“IF I WAS CASTRATED I WOULD BE HAPPIER”) and nu metal slink (“YOU MIGHT AS WELL BE A CORPSE”), Gorczyca proves that old sounds still have their rightful place in reinvention.

Rabbit Junk
This Life Is Where You Get Fucked

The third (and most ambitious) album from Seattle outfit Rabbit Junk gives digital hardcore the concept album treatment with sensational results. Divided into a trio of movements and contexts, This Life Is Where You Get Fucked is a musical travelogue, with stops in 1941 Warsaw, Miami clubs in the ’70s, and modern-day Seattle. Along with its unique geographic location, each suite is inspired by its own sphere of influence: Opening chapter “The Struggle” filters goth metal through a cracked drum and bass lens; “Ghetto Blasphemer” mutates hip-hop into black metal murk; and “This Death is Where You Get Life” lies in the overlap between punk and gabber rave. Frontman JP Anderson’s vocals are chameleonic, able to channel the brutal screeds of punk and the knuckle-dragging lows of metal.

For nearly a decade, Long Island’s Machine Girl has pulled the threads of punk and dance until sonic carnage erupts. Hopping between the mosh pit and dance floor, Machine Girl shifts industrial music into bounce-fueled hyperdrive on their 2018 LP The Ugly Art. While its production may appear slick, The Ugly Art is glutted with MG hallmarks: blister-popping gore, incel revenge fantasies (“Fuck Your Guns”), and murder-your-master ballads (“This Is Your Face On Dogs”). Shingling electronic flourishes and warped vocals on a house of body horrors, The Ugly Art drags cyberpunk into the corporeal world.

Building hip-hop with an industrial blueprint and an adventurous arsenal of samples, Iowa-based rapper VoidDweller pushes digital hardcore into its most contemporary iteration. “Excess ft. Sound Eater” features a downtuned sample of Janis Joplin’s “Mercedes Benz” syncopated to the sound of helicopter blades, while the death industrial dirge “Leech” gets a boost from a fluttery, tin can drumbeat. The end result is an album full of oddities and anomalies, showcasing the glorious strangeness of digital hardcore.