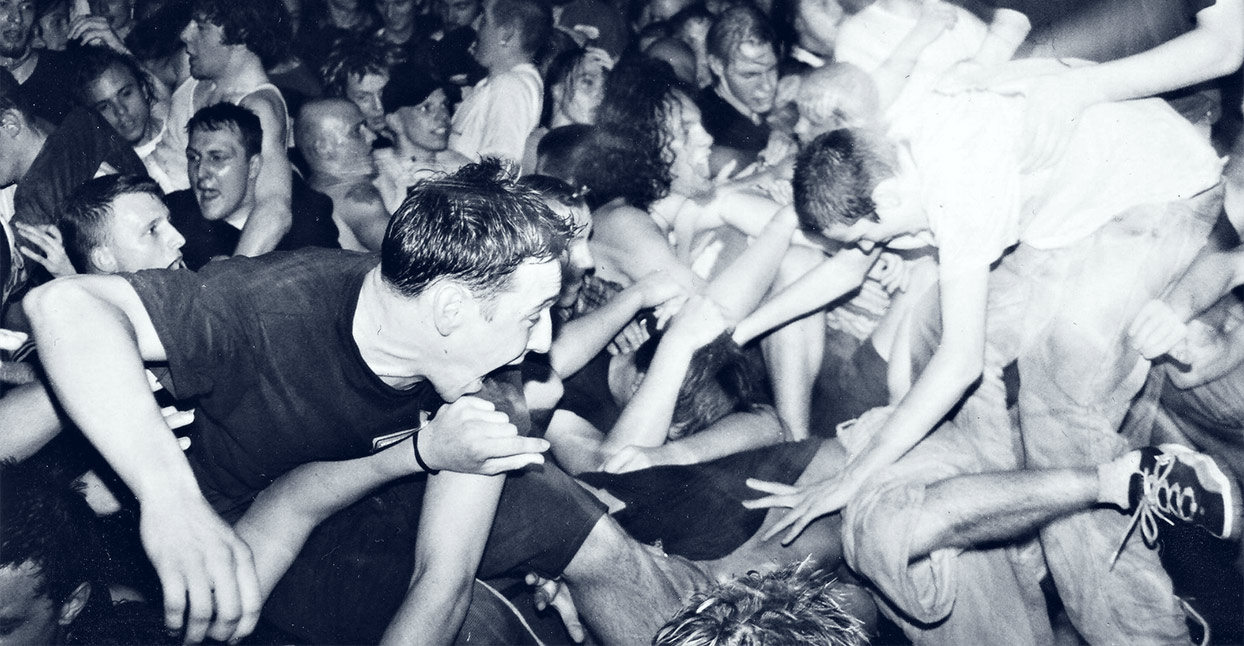 The 1990s began as a prosperous time in hardcore, as countless formalized styles splintered off of punk’s most popular subgenre. The Revelation Records-sponsored youth-crew movement, headed up by Youth of Today and Gorilla Biscuits (and predated by BYO’s 7 Seconds), overlapped with a greater straight-edge hardcore uprising, helped by the militant likes of Judge, Bold, and Chain of Strength. There was also the New York-bred mid ’80s toughness of Agnostic Front, Sick of It All, Warzone, and Cro-Mags that was threaded through each raging mass.

Though plenty angry, the brazen, gutsy hardcore from the early part of the decade lacked some of the metal-tinged sophistication of some of its predecessors and went straight for the jugular—specifically, making the center of the song the chug-chuggin’ hardcore breakdown (the universal instrumental call to “open this pit up,” thick palm-muted rhythmic guitar jogging alongside the clicking, pinpointed thrum of a double-kick pedal and quarter-notes on the crash). Guitar tuning dropped to the fifth circle of hell. Lyrics became directives along the lines of “Listen up, shit is about to get violent.” It was all muscle, and about as nimble as a boulder.

The beatdown-hardcore sound (though the term “beatdown” itself derives specifically from the ‘90s New York hardcore scene, it grew to encompass a larger variety of mosh-friendly, breakdown-fixated groups) began to flare out near the decade’s tail end as nu-metal adopted its hamfisted intensity, and the Hydra Head and Relapse catalogs of intricate, complex metalcore grew larger. But as of late—and thanks in part to the cyclical nature of decade-defining trends—the ’90s hardcore sound has come back with a vengeance. These artists are leading a new generation of hardcore kids to pledge allegiance to the days of yore.

From Springfield, Massachusetts, Absolute Suffering deliver a healthy-sized cadaver of classic beatdown hardcore. Their 2015 EP Death Is Guaranteed is dark in concept via title alone, and fatalistic title-track lyrics like, ‘There is no way out/ But beneath the surface / All hope is gone/ There’s no purpose’ do nothing to lighten the mood. Sludgy breakdowns are augmented by hot metal squeals and licks and are often slowed down to such a slog that you can feel the snapping boom of the snare deep in your guts. It resonates in such a way to make you think that maybe the tracking setup was hijacked from 1995. They’re out on tour in January with Jesus Piece.

Axis. Photo by by Dana Nichols.

More akin to the hyper metalcore of Deadguy and Buried Alive than, say, Bulldoze’s rough-and-tumble breakdowns, Orlando’s Axis is representative of the strand of ’90s hardcore that relied on crazed timing and harmonics scorched into breakdowns. Their 2015 full-length for Good Fight, Show Your Greed, is meticulously constructed from the manic rhythms up, with the collapses of each track coming at obtuse angles rather than head-on. The changes are fierce and frequent, and frontman Rafael Morales manages to keep in sprint with every new twist like it’s no sweat whatsoever. Check for their collaborative EP with Seraph/The Light that’s dropping December 9th.

Tampa’s Blistered are one of the tightest in the new breed of metallic hardcore bands. Their 2015 record, The Poison of Self Confinement, includes triumphant Maiden-true, metal-riff harmonies cruising over torpedoing breakdowns. Near the end of “Path of the Coward,” a rolling tom rhythm transitions into a chugging turmoil that clicks along in a unison much adopted by hardcore bands like Earth Crisis in the later half of the ’90s. And let us also please look to the album’s glorious artwork: part fantastical ode to vintage metal, part grim foretelling.

The Louisville fivesome are one of the fastest-rising of the new crew of beatdown bands, having just released their acclaimed debut full-length Laugh Tracks via Pure Noise. Sharp and crisp, their drubbing double-kick rhythms and slow-snaking riffs direct the thrum of the mosh pit that splits open on the first track, first breakdown. Maybe more so on their 2015 split with Damaged Goods than on Laugh Tracks, Knocked Loose’s massive guitars subsume the clatter into a black hole, shoving tracks till they practically collapse in on themselves. On “Billy No Mates” you can pretty easily envision the 20-feet-deep semicircle of space being cleared out from the front of the stage as a swarm keys up.

Maybe the rawest and most hyped in the new hardcore legion, Philly’s Jesus Piece weld together beatdown grooves with occasional blasts of grind and Coalesce-esque metalcore flourishes. A track like “Coward’s Way” from their self-titled EP from 2015 isn’t afraid to stop on a dime and explode in an entirely different direction, practically changing rhythm with each fresh spin kick. This year’s Summer 16 Promo—pretty much two tracks and an interlude—is a greater, more congealed beast, with Aaron Heard’s vocals hammering at rumbling, subterrestrial guitar chugs and tight, flailing rhythms. The sky’s the limit with these dudes.

Self-described as “Music for the reckless youth,” Mercy Blow is a special kind of violent rage. Never too technically swift in attack, the foursome lurches forward together via a hellish fusion of smoldering low end. From their most recent EP Secondhand Suffering, the best cut, “Purge,” rains down in waves of cymbal whirr and filthy, thick guitar before pausing along the fault line to rejigger the breakdown and begin again. At the end of the track, when the rhythm is stymied and dragged down to a slow-motion deep stomp, frontman Zachary Wilson seems to be screaming in defiance of the song’s implosion around him.

In the late ’90s, too many metallic-hardcore bands fell victim to the over-compression—and damn near digitization—of their guitars and drums. Records began sounding as though they had been tracked in panic rooms; there was no soul, and tempers felt thin. On their reckless self-released EP Bliss, LA’s Momentum writhe in wide-open space while rhythms feel so on the brink of tattering and unraveling that you have to keep on high alert just in order to keep a hold of something. A volatile mix of technical hardcore and crossover thrash, Momentum have only been in existence since July, which makes this record all the more impressive.