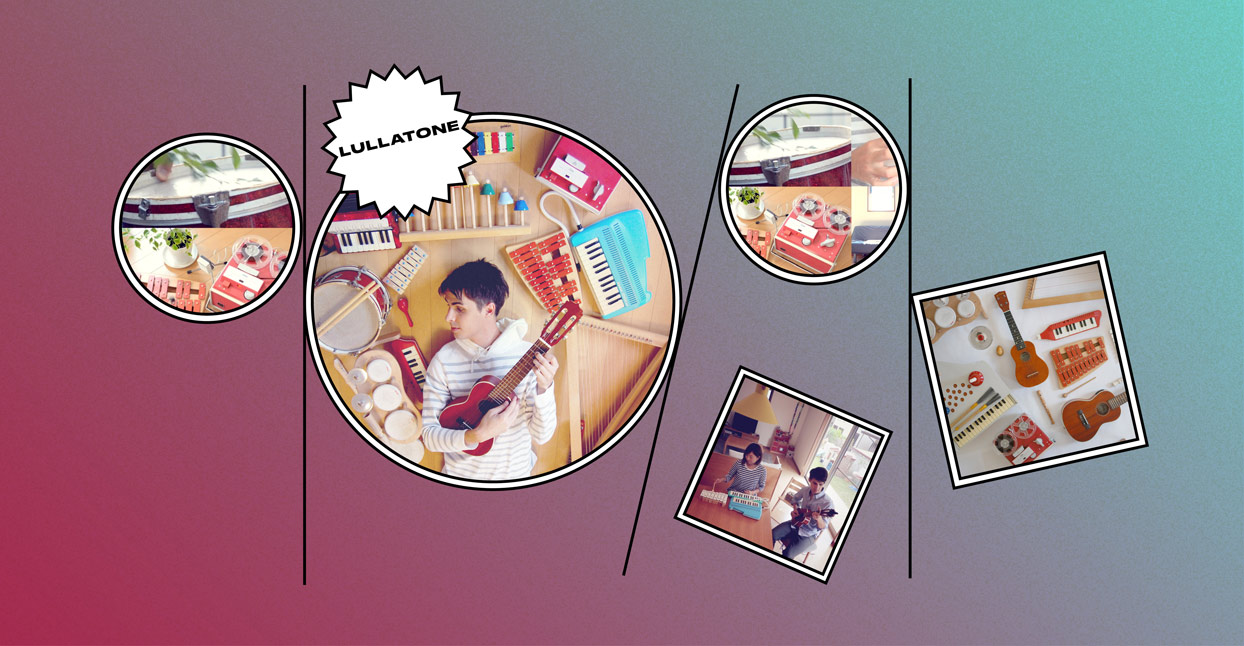 One of the first things you see upon entering Shawn James Seymour’s workspace is a sign that says “The Studio Is A Playground,” which is a riff on Brian Eno’s lecture titled “The Recording Studio as a Compositional Tool.” Seymour’s space—located on the top floor of an apartment building in Nagoya, Japan—brings this in-progress manifesto to life. Throughout our afternoon together, Seymour shows off a variety guitars, synthesizers, and homemade doodads, including a series of bells on a turntable that generate random melodies.

“I really like being playful,” Seymour declares. “I think being playful has a bad connotation, because it sounds childish. But for me, being playful allows me to have fun. If you’re just stuck on the computer, dialing in some synthesizer parameters, it’s not that fun. But if I try to change a sound in real life somehow, by putting something on top of the strings of the guitar so it kind of distorts, that’s more playful and interesting.”

This whimsical sensibility is central to Lullatone, the electronic project Seymour and his wife Yoshimi Seymour started in 2003. The self-identified “pajama pop” group focus on the minutiae of everyday life, using simple melodies to explore a wide range of otherwise benign subjects, and the emotions associated with them: tales of sleeping salarymen, paper airplanes, leisurely bike rides, sweater weather. The manifestation of their sound has changed over the years—from computer-powered minimalism to indie pop-adjacent creations—but the wide-eyed wonder remains.

“I really don’t think we are a children’s band at all,” Seymour says, while reflecting on the childlike themes that appear throughout their work. “The thing about childhood that I like is the act of discovering stuff, and experimenting and messing around.”

Seymour’s stark sense of curiosity developed during his American childhood, in the backwoods of Louisville, Kentucky: “We’d try to dam up creeks, and try to make pools, real Tom Sawyer kind of stuff,” he recalls. Once he got older, he parlayed that joie de vivre into a slew of musical endeavors during high school in the late ‘90s, from noisier rock bands (including The Moths, who once opened for Japanese band Melt-Banana) to solo creations created on a four-track recorder.

While studying at Bellarmine University in Louisville, he met fellow student Yoshimi Tomida, who grew up outside of Nagoya in central Japan, in an intercultural communication class. “The teacher asked the foreign students if they were having any problems in America so far,” says Seymour. “Yoshimi said, ‘All the food is gross.’ So after class I told her I knew a place that had groceries from other countries. So we made a plan to go, and then we got extra stuff to have a picnic in the park. We started dating pretty much the next day.”

They formed a band shortly thereafter—initially called Music For Nintendo, then rebranded as Information People—and began playing chirpy synth-pop in art galleries around the city. After starting Lullatone, the pair relocated to Nagoya, where they now live. “Not too long ago, Nagoya got voted the most boring city in Japan,” Seymour says. “I kind of like that. I can wear that like a badge.”

This section of the city, with all its seemingly “boring” sights and sounds, has shaped Lullatone’s music considerably over the last decade. On a surface level, the songs skew pleasant and happy, but are ultimately far more complex than they let on. And that’s what Lullatone do best—capturing the everyday and finding the feeling within.

“We’re not dumb, we know there are a lot of bad things in the world. I’d say we’re honest about it. I don’t like when things look too happy, and are kind of fake,” he says, adding with a laugh. “We have minor chords in there too sometimes.”

Here are five highlights from Lullatone’s discography on Bandcamp.

The first Lullatone album came together mostly during 2001 when Seymour studied at Yoshimi’s school, Kansai Gaidai University, on an exchange program. “Yoshimi had a little apartment, and I stayed with her. So we were both crammed in. She had a tiny computer, a Sony Vaio! If you put our phones together, it would be about that size,” he says. Using this toy-sized device and a free copy of FruityLoops, he stayed up late at night making the songs that would appear on 2003’s Computer Recital. “I’d wake [Yoshimi] up to show her what I made…they were kind of like lullabies, since it was so late at night. And she would say, ‘Can we go back to bed?’”

Early Lullatone relied mostly on sine waves to create minimal melodies, moving between the playful (“My Second Favorite Song In The World”) to longing (“Plastic Toy Record Player”). It’s a simple album, but these hoppy tracks conceal a charm and hint at the everyday childhood wonder that would soon become a prominent theme on future Lullatone releases. Even more impressive are the limitations Seymour faced making it. “I only had the free version of FruityLoops at the time, so I couldn’t save anything I made. I had to finish it then, and it was over. There was no fixing it, even if I didn’t like something.”

The first few Lullatone releases garnered a good response, and Seymour had the chance to perform live. He began performing on the same bills as local post-rock bands like Jesus Fever and, seredipitously, a former drummer for Melt-Banana, but Seymour wanted change. “That’s when Yoshimi was really active, because we started adding vocals and more beats. All the things that happen when people play shows. It tends to be that people add in things that make a crowd move more. That’s exactly what we did,” he says with a laugh.

Plays Pajama Pop Pour Vous captured this period perfectly. In addition to singing and sine waves, Lullatone expanded their musical vocabulary on this 2006 album by introducing bells, strings, and glockenspiel to their music. The playroom-friendly sounds and the duo’s self-labled “pajama pop” may have presented them as a bit more twee than they wanted, but this set features some of their most endearing moments: harp cascades usher in “Sleepytime Samba” and “Bedroom Bossa Band” (which you can hear Yoshimi breaking out in laughter mid-lyric, underscoring the intimacy of it all).

A lot had changed for the duo by 2011. Lullatone had toured more around the globe, and also welcomed their first of two kids (inspiring an album of “straight-up lullabies,” Songs that Spin in Circles, that Seymour says was partially written in the hospital the first few days after their son’s birth). They were also getting more commercial opportunities, including movie soundtracks. “I ended up using a lot of songs for that—like, ‘This could kind of fit into the film, but I kind of want to save it.’ That became Soundtracks for Everyday Adventures.”

This album is a return to instrumental music—though Yoshimi does provide “super quiet vocals” according to the credits—and features a heavy use of strings alongside the more whimsical sound palette the pair long relied on. The album signifies the moment Lullatone latched onto celebrating the mundanities of life in an emotionally rich way, as evidenced by tracks such as “Going To Buy Some Strawberries” or “Checking Things Off Of A To-Do List Early In The Morning.”

When asked which Lullatone album would be the best gateway into their catalog, Seymour emphatically suggests Soundtracks. “It seems like it’s going from one area into another in an interesting way. The things happening in the background feel a bit more ambient, like our early releases, and we have drums that are more from the middle part. The instrumentation is a bit more acoustic, which shows the later part. This is where I think everything came together.”

The tracks compiled on this 2016 release originated as a weekly release series: one new song, every Thursday, for one year. It came about at a period when Seymour had a steady drip of commercial projects to wrangle with, and wanted to make sure he could still find time to make his own music. This artistic prompt pushed Lullatone to try out more ideas than ever before, working with even more instruments—or, as in the case with “Trying To (Not) Work In Beautiful Barcelona,” slicing up an old Lullatone number as a foundation for something new. Accordingly, Thinking About Thursdays doubles as Lullatone’s musical journal of sorts. The tracks reflect on moments both small (“This day it snowed,” Seymour says, of the song “A Blanket Of Snow Spotted From Under The Blankets In Bed”) and somber (“How Frost Grows” was written after his grandmother died). “There are some stinkers, but some I really like still,” he says.

Lullatone’s next release, arriving next month, finds Seymour recasting songs from across the project’s history for classical piano. The genesis came from an unlikely place: “Our son, around second grade, started having more homework from school. So when he’d come home, I’d sometimes play this album called Bach To Work, and it’s just Bach songs,” he says, laughing. “I really like it! It’s one of my go-to albums, Bach songs done on solo piano. It’s [got] the worst title, the worst artwork. It’s good, though.” This gave Seymour an idea: why not strip down their own songs, and craft an appealing record which could simply fold into the background?

“I kind of got sick of glockenspiel sounds and stuff, and I thought this would sound the most timeless. And to be honest, piano is probably my least favorite instrument. They can sound kind of harsh and abrasive, when someone’s really banging on it. But when you hit it really soft, they are pretty and nice,” he says.

The album’s title reminds of Lullatone’s tongue-in-cheek side, riffing on how so much art ends up just being another piece of commerce in 2019 (“There’s good sides to gift shops too; I like how they give you a chance to take something home with you”). It’s also partially inspired by Seymour’s musical idol Jonathan Richman, another artist with plenty of childlike songs in his arsenal, specifically on his album ¿A Qué Venimos Sino A Caer? “He goes back to his old songs, but in Spanish. It’s so pretty. But I thought it would be fun to revisit old songs, but with a new filter, you know?”