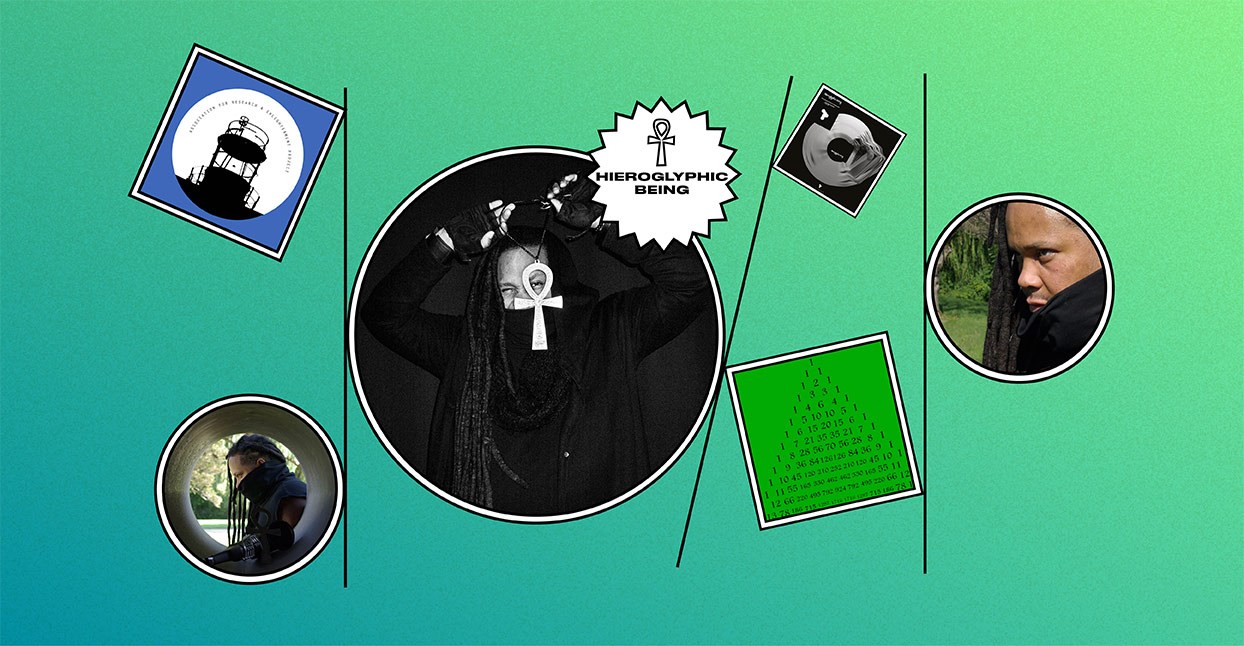 To hold a cursory conversation with Chicago native Jamal Moss, the mind behind experimental acid house project Hieroglyphic Being, is to strut through Chicago house history. Having come up in the ‘80s and ‘90s, Moss attended shows and raves at clubs like the Muzic Box, where legendary producer Ron Hardy DJed. Moss has done a bit of everything concerning the music industry—starting by dancing out at clubs, becoming a promoter, DJing at clubs and on the radio at WNUR, making music under many aliases, and having his own label (Mathematics Recordings). Over the course of a two-hour chat at Evanston restaurant the Peckish Pig, he mentions working in robotics, academia, at a financial firm, and even as a gigolo. And that’s without even touching Hieroglyphic Being, his prolific project which melds a number of styles—free jazz, industrial music, New Age, and acid house—into a sound entirely his own.

Moss had been releasing on Mathematics since his first white-label 12” in 1996, so why does Discogs list So Much Noise 2 Be Heard—released in 2008—as his first album? “Technically speaking,” Moss begins, “So Much Noise 2 Be Heard is the first, but outside of America. I’ve always dropped a whole bunch of albums locally. I did stuff on cassette and CD before vinyl. Back in the day when you walked around with a cassette it was not a real release, but lo and behold, 20 years pass and cassettes are considered albums again.” Those cassette releases are long gone, unfortunately, at least for now; Moss had, at one point, run across someone with copies of a few of them who was uploading the music digitally, but their hard drive crashed. Those were releases he was hustling at raves and gigs. “I was just like—these rave kids are into electronic music,” he says. “I’ve dealt with people in the scene, I’ve got some gear, I’m gonna make some stuff and pay my rent. Survival mode.”

By the time So Much Noise 2 Be Heard finally arrived, Moss had been making music for a couple decades, and taken in an incredible amount of work from others. This album showcased his diverse influences, beginning with four-tracks of more classic acid house, before dipping into the piano-peppered, rollicking “The Piano Effect [Future Jazz Version],” which juxtaposes the keys with layers of organ floating on organic-sounding drums whose tempo builds and crashes across the track’s nearly seven minutes. (Moss has uploaded two other early Mathematics titles to Bandcamp, as well. The most notable is 2005’s Sound of Music EP, a three-song set comprising 24 minutes of pulsating techno; it begins with the jazzy and organic “Letters from the Edge” and then tumbles headlong into more throbbing, psychedelic material.)

Additionally, Moss has uploaded And On The 3rd Day, an EP of four tracks under the name IAMTHATIAM, referencing the name God gives himself in the book of Exodus while appearing to Moses as the burning bush. IAMTHATIAM has more thematic resonance with Hieroglyphic Being than outright sonics, making it a somewhat noisier project. It also features an overt nod to divinity on its center label, upon which is written “Individualization of the God Flame from out the presence of the IAMTHATIAM in the Great Central Sun.” Religion and mythology are constant in Moss’s work, and figures from Egyptology, Abrahamic faiths, and more esoteric practices are ubiquitous, something that came from his open-minded upbringing that allowed access to multiple spiritual belief systems and occult literature, not to mention his collegiate and graduate studies in anthropology.

Moss’s 2016 Ninja Tune LP The Disco’s of Imhotep, for instance, unmistakably references a high priest of Ra in the ancient city of Heliopolis, Imhotep, a veritable polymath who donned various professional mantles—poet, magician, engineer, astrologer, physician. The Disco’s of Imhotep is an album dedicated to the tradition of healing, invoking this ancient religious figure alongside a more modern one. “Actually that record was an homage to [Honduran herbalist] Doctor Sebi,” says Moss. “A modern-day Imhotep. I had a vision that said to put this out before he dies. Believe it or not, the album came out the day after he died. Doctor Sebi tried to heal humanity in a natural, organic way, and Imhotep’s work was considered medicine, too, healing humans with conventional herbs, but he did it through sound healing as well. There is a lot of proof that he used to use harmonics and forms of vibration to heal illnesses in human bodies.”

The Disco’s of Imhotep is one of the more accessible entry points into Moss’s oeuvre, with only two out of the collection’s nine songs exceeding five minutes. Melody is dominant on Disco’s, which begins with the hazy New Age of “The Shrine of the Serpent Goddess” before plummeting into the clear and catchy “Sepulchral Offerings,” a track featuring highly melodic, lithe synth lines that dart in and out of one another atop a rhythm section that swings from sparse to pummeling across the song’s duration. The record ends with “Nubian Energy,” a standout that includes Moss’s incanting “It’s getting hot up in this motherfucker,” and other phrases, while a throbbing industrial beat lays a foundation. It’s fun, but also keenly demonstrates Moss’s ability to layer harmonies and textural stems, even with varied time signatures.

Just one year prior, Moss’s process had been put to the test in a new way—with the double-LP ensemble release We Are Not The First, a free jazz-esque album credited to Hieroglyphic Being & J.I.T.U. Ahn Sahm Buhl on RVNG Intl. It features avant-garde luminaries such as Sun Ra Arkestra’s Marshall Allen, percussionist Greg Fox, and vocalist Shelley Hirsch. “That record is about this group of esoteric readings I was doing,” says Moss. “Matt from RVNG was like, ‘Let me talk to you about something.’ So we go out to dinner and he says, ‘I want to see you do what you do with machines, but with human beings.’ I was like, ‘You sure about that? That could be really fucked up.’ And he was like, ‘I want it to be fucked up!’” We Are Not The First took two years to make, across many studio and engineering sessions. Moss admits that the final recordings were the third pass after many days of arranging improvised contributions, and proved to be an influential experience. “That was the first time I’ve worked with so many people in a professional studio at the time,” Moss says. “It was a learning process. The later stuff is more tight because of that RVNG experience in the studio.”

Moss’s process has always involved taking organic sounds and reworking them into something else, but on his newest series The Language of Strings, begun in 2018 and already boasting five volumes, Moss streamlines his prolificacy and vision. The Language of Strings arose from a pragmatic idea: people would say he had so much that it was hard to catch up; therefore, he would come up with something easy. “Language of Strings is simple compared to other titles,” he admits, before revealing a major, hidden benefit of this facile approach: his increased output also begets increased opportunities for creative growth.

“Anything that I create—before it goes to vinyl—I’ll put on Bandcamp, where people can decide what they like best for themselves. I’ll get the feedback and then go back and redo it separately for an actual release.” The other idea was to utilize a friend’s studio during its downtime—“He charges a bare minimum if I’m there overnight,” Moss says. “They have all types of keyboards, drum machines, equipment. My friend will sit there in Pro Tools, and we’ll record whatever I play. Then we save the stems, and I’ll go home and listen through, mixing down to formulate something.”

Moss is also about paying it forward—a model he learned from his mentor, the Chicago house producer Adonis—and he’s imparted this philosophy in his label, taking nothing for himself from artists’ publishing rights. While he clearly has much left in his own gas tank, he mentions that he’s hoping other artists will take over.

“I hope younger people see what I do,” he reflects, “and they take it to the next level. It’s part of evolution. I feel like maybe in the future I have more great work to do. Right now, I’m starting a new film company, a clothing line, jewelry I’m making. You’ve got to diversify!” This sounds like classic Moss, interested to touch everything he can gets his hands on, and make it his own, spreading his healing message while doing so. In other words, he’s beginning to sound more and more like a modern-day Imhotep himself.