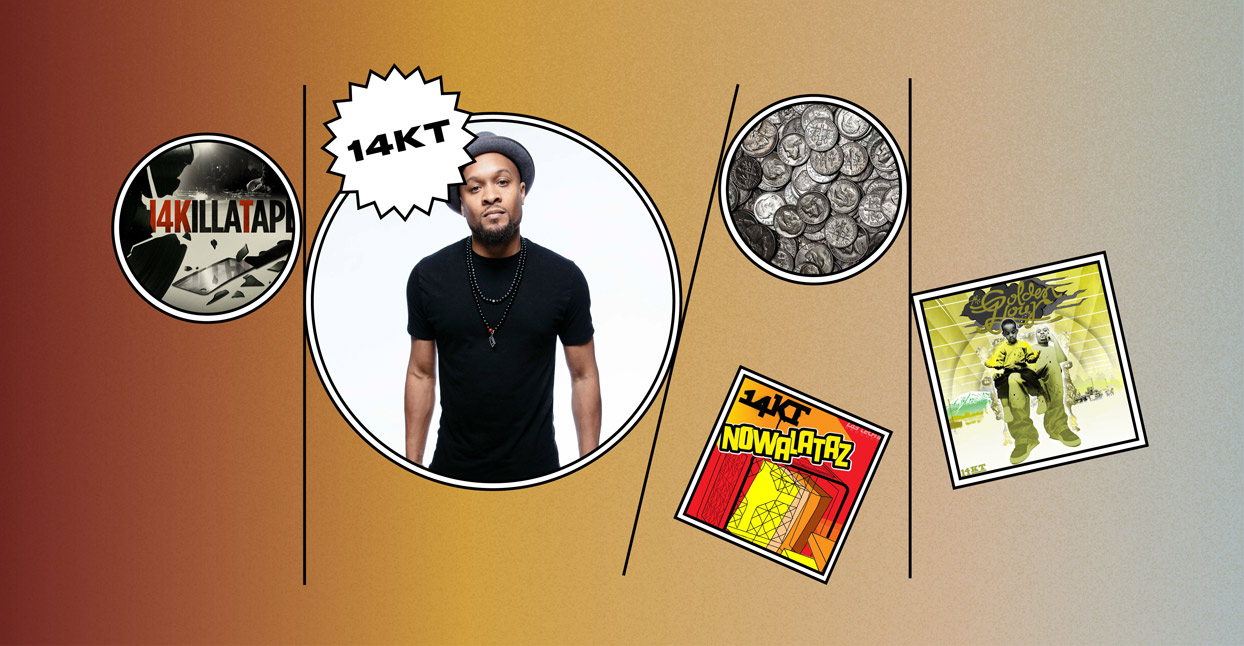 “I started putting synths in my music after I got inspired by this Dexter Wansel record Life On Mars,” says 14KT, a hip-hop producer with an expansive musical mindset who grew up in Ypsilanti, Michigan, 30 miles outside Detroit. “It’s a Philly soul record that came out in the ’70s, and I was always wary of those records ’cause I thought the early synths could be cheesy. But this one was so soulful.”

After hearing that record, 14KT added a Yamaha Motif keyboard to his production arsenal. That was in 2003, around the time 14KT started to find his musical voice and nail down his beat making style. If you’ve dug into 14KT’s vault—which includes a stint as part of the Ann Arbor rap troupe Athletic Mic League, a full-length collaboration with the singer Mayer Hawthorne, and a Donuts-style tribute to J Dilla—you already know that synths are a signature component. Spacey keys and funky electronic effects swirl around his tracks, giving them a futuristic aura.

Growing up in Michigan, and witnessing the wave of underground Detroit hip-hop that sprouted toward the end of the ‘90s, ingrained in 14KT a commitment to balancing sleek synths with “something raw and dirty.” That requirement is fulfilled by his use of gritty snares and hard-hitting slaps, which 14KT often leaves programmed live, rather than quantizing them, to give them a sense of humanity—“like an actual drummer is playing.” He takes a similar approach to chopping up samples, inspired by DJ Premier’s vital run of boom bap productions during the mid ‘90s. “What Premier did was tune my ear to being able to hear different melodies from the same source,” 14KT explains. “That’s what a true chop artist is: You can take a rock record, and maybe that day you’re kinda sad and you can make it feel like a jazz record. You’re not just sampling—you’re manipulating it to portray a certain emotion.”

Mayer Hawthorne can testify to the potency of 14KT’s blend of synth melodies and powerful drums. Friends since high school, where they met and bonded over a shared love of basketball and digging for the samples used in their favorite rap anthems, he’s collaborated with the producer since their days together in Athletic Mic League in the early ‘00s. (At the time, Hawthorne went by the name DJ Haircut). “It’s his musicality and the way his drums swing,” says the singer. “You have no choice but to snap your neck, and there’s always that spacious, inviting pocket to swim around in vocally.”

To celebrate the release of 14KT’s latest album, the jazz-based For My Sanity, here’s a brief guide to the cornerstone releases in his rich discography.

Released in 2008, The Golden Hour wasn’t just 14KT’s debut solo album—it was a do-or-die moment in his career. “I was at a point where I was going to quit,” he recalls. “So I was like before I quit, I’m gonna take all this music I love, but that people slept on, and turn it into an album.” The gamble paid off: Following the album’s release, 14KT found himself recognized as a producer adept at combining funky, slapping drums with melodic transitions, typified by the layers of intertwining synths on “Surgery” and the nostalgic vibraphone motif running through “Ypsilanti.” Looking back The Golden Hour, 14KT remembers working out of his home studio in Ypsilanti. “It was really just me and my records in the house at the time,” he says.

Days before J Dilla passed in February 2006, the iconic Detroit hip-hop producer released Donuts, an album consisting of short sonic sketches designed to capture the essence of a savvy sample digger who can hear a snippet of music and instinctively flip it into a fresh song. As a way of coping with Dilla’s death, 14KT set to work on his own Donuts-styled tracks; while walking around his house playing records and doing housework, he’d hear a fragment of a song—maybe the opening words of a soul ballad, or a chord change in some strings—and hurry over to his studio setup to turn it into a beat. These recordings were eventually released in 2009 as Nowalataz, a tribute to someone 14KT calls “my main motivation, ’cause Dilla was someone from the east side of Detroit, and I felt like he was doing it for Michigan. He created a movement.” The project closes with “Black N Gold,” produced by Detroit artist Black Milk. The track came about after 14KT heard Black Milk’s original production of the song on a beat tape. When Black Milk told him that he’d lost the original beat, 14KT bulked up the raw version with a new bass line.

Towards the end of 2008, 14KT became involved in the beat battle scene, which pits producers against one another and challenges them to make use of an arsenal of their most fearsome beats. 14KT’s go-to productions during this period were subsequently assembled into the 14KillaTape, released in 2011. “I took the music from the battles and gave it to the people,” he says, adding that he crafted this batch of beats with the Adobe Audition software. Embracing a more aggressive style—and mindful that beat battle productions need to have a sense of immediacy—the tracks on the tape hit a visceral thump. But true to 14KT’s credo, there are nuanced elements throughout the project: “The Abominable Snowman” calls on funeral organ lines to bring through a sense of menace; “3 Blind Mice” warps a children’s nursery rhyme until it resembles something from a horror soundtrack; “Choir Robed Up” sounds like a choral sample run through an echo chamber. An updated version of the concept, 14KillaTape: Redux, is also available, with seven new extra-grimy beats subbed into the roster.

2013’s Nickel & Dimed starts out with a warning: On the opening title track, 14KT picks up the mic and drops a rap that addresses the way “people were downloading and taking my instrumentals and putting them on their own mixtapes with my name on it saying I produced it! So on the first song, I decided to tell everybody exactly what’s gonna happen to this tape. So it’s like, ‘I see you, I told you, I’m not dumb.’” It’s a verse 14KT wrote completely off-the-head and recorded in the moment. After the feisty introduction, Nickel & Dimed dives into 14 instrumentals drawn from nostalgic soul samples. But then comes the twist: A selection of 14KT’s favorite vocalists are featured on a seven-song encore. So the ‘80s R&B synth riffs and clattering snares of “Right So” are turned into “PAID,” featuring raps by West Coast wordsmith Blu, amping up the boom bap attitude of the track. This encore sbection wasn’t planned; after the Mello Music Group label suggested releasing an EP of vocal tracks, 14KT decided to “give everyone all of the music.”

14KT characterizes Elelator, which dropped in 2015, as “an extension of the Jaded Incorporated record,” and says he saw it as an opportunity to explore his relationship with Detroit’s history of electronic and techno music. Cybotron’s “Clear,” which was produced by Juan Atkins and released in 1983, was particularly inspirational for him, because of the way it connected dots between scenes and genres. “That song was released around the same time as [Afrika Bambaataa’s] “Planet Rock,” so when you go back and listen to a lot of the elements that inspired Detroit techno, it was the same elements that inspired hip-hop on a grand scale.” That fusion of hip-hop and electro influences is on full display throughout. “BlackAPhonic” is all feisty ghetto-tech snap and bounce; “Castle Of The Curios City” sounds like a sweet celestial hymn beamed down from the cosmos; and the title track is a slab of high-octane future funk that would fit right into a Carl Craig DJ set. “I think the electronic influence isn’t just something that’s a part of Michigan hip-hop,” 14KT says. “It’s a big part of Michigan music in general.”

Asked 14KT what sets For My Sanity apart from his previous releases, the producer wastes no time getting right to the point: “Jazz! I grew up loving jazz records, and I wanted to create them in my own unique way. This is the beginning of my new journey with jazz and hip-hop.” The record boldly reinterpret jazz influences through a hip-hop lens: “Down The Street From Peace” hints at the Mizell Brothers’ jazz-funk production for Bobbi Humphrey’s ‘70s Blue Note projects; “Sunday’s Yellow” sets trumpet player Farnell Newton’s bluesy playing against shuffling, bossa nova-inspired rhythms; “Purple Flame,” which was recorded with Detroit artist Magestik Legend, broadens the palette to introduce Rotary Connection-style psychedelic vibes. For My Sanity also features James Poyser (from The Roots) contributing to “The Power Of Same,” which brings 14KT’s solo discography full circle. Remembering how his debut album, The Golden Hour, was his make-or-break moment, 14KT says, “James played on classic records with Erykah Badu, Common and J Dilla, but when I met him he knew about The Golden Hour and was a fan of my music.” Collaboration came naturally: “I had an idea and sent James this record and he was down—it’s crazy how the world works.”