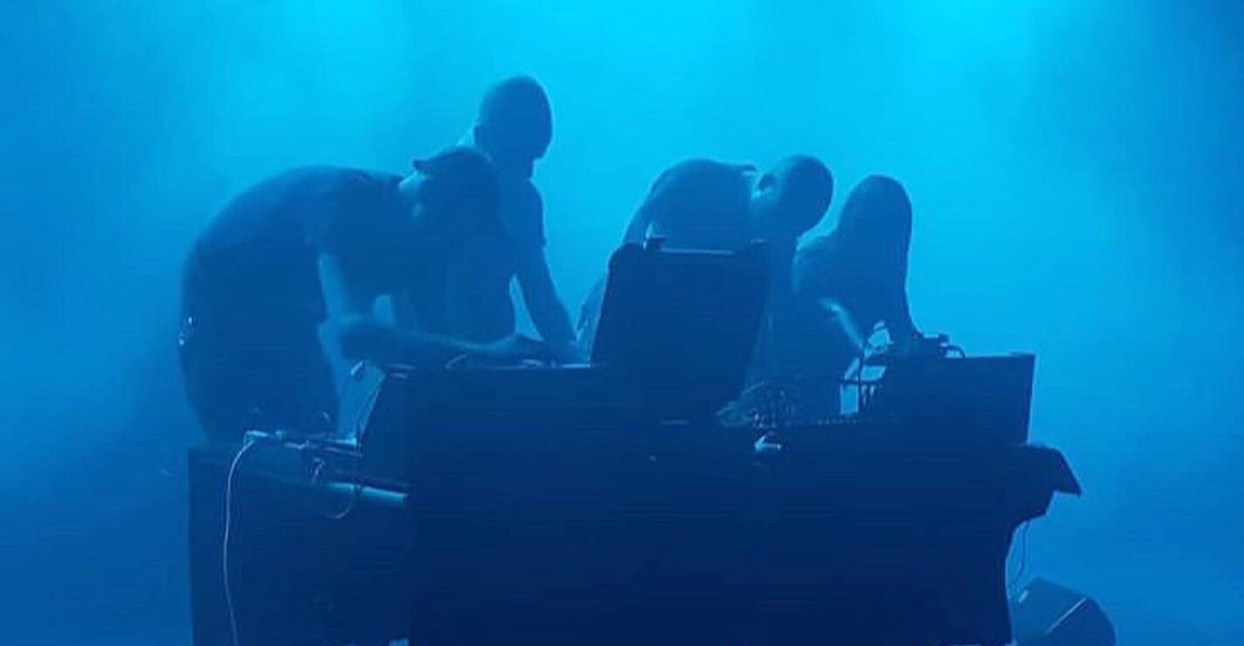 When an unstoppable force meets an immovable object, does it make a sound? Undoubtedly, yes—and that sound can probably be found somewhere in Total Black’s catalog. For just over five years, the uncompromising sound of the Berlin-based label has painted the electronic music scene, indeed, pitch-black.

Founded by former Montréal resident Brett Wagg, Total Black was born from a 2007 stint Wagg spent commandeering a DIY cassette label (he refuses to disclose the name). In 2012, Wagg doubled down on his zeal for underground music, and decamped to the experimental mecca of Berlin, determined to unearth sounds from the furthest corners and subterranean sects of the noise world.

“I have been hugely influenced by many classic industrial and noise labels; their dedication to their work is a massive inspiration to me,” Wagg says. “I intend to follow in their footsteps and carry on the legacy of the industrial underground.”

“Looking at industrial and noise in the ‘80s and ‘90s paints a massive and extremely varied landscape, and that’s more interesting to me than focusing on one specific sound or style,” Wagg says. Over the course of their seven-year run, Total Black have traversed the moving tectonic plates of tone and tenor. Let these landmark releases serve as a map of its topography.

A joint effort between noise collagist False Moniker and drone maker Cremation Lily, this four-track venture pits the sacred against the profane, sonically and thematically. A brushfire of distortion blazes across the entire album, occasionally quelled by silky synths and tolling church bells (“The Treasury Painted Roof”) and arpeggiating synth patches (“Jesus Chapel”). Whether the forces looming above the duo are divine or diabolical, one is never sure, but they are undoubtedly unstoppable.

“This record is much louder and more urgent than the previous tapes,” Wagg says. “This newer direction in the project is really exciting to me, and it’s by far one of my favorite releases on the label to date.”

The album’s opening track is borderline glimmering, employing fizzling circuits and treble-y organ, but that calm is swiftly broken by the thunderous, feedback-fed maelstrom of “Trauma Martyr.” Ten-minute closer “Redemption Angel (Corpse Criteria)” bolts through its first half with before yielding to high-voltage organ, breathing new life into the music as a prelude to its demise.

“Himukalt explores the sex work industry from a perspective which is not often given a platform, much less in power electronics,” Wagg says. “This tape runs the gamut of emotions, from empowering to absolutely chilling.”

The inaugural release of a blistering trilogy, Ester Kärkkäinen’s exegesis on the sex industry is studded with three interludes showcasing firsthand interviews with sex workers. Vocals are relegated to the background, and the album gnashes through its nearly 40 minutes, allowing Himukalt’s knob-shattering short-circuitry to occupy the forefront. The album’s final track, “No Safe Distance,” is driven by a rock-steady drumbeat, only to be peppered with orgasmic sighs and spoken refrains (“There’s no safe spaces”).

Almost four years to the day since releasing Oil Thief’s cacophonous four-song EP In The Heat, Total Black dropped this tour de force led by Lee Landey, the bassist of psych-rock outfit Wand. “This album is a culmination of all the different styles of industrial music the project works under,” Wagg says of the release, which he considers a pinnacle in the Total Black catalog.

The Colony is a triumph of contradictions: Industrial wheezes are swathed in chiffon fuzz, rhythms move in and out of line, red-level thrash is offset by resonant field recordings. Equal parts meditative and combative, The Colony plays out like lost translations from a world bygone, a dissonant wasteland only Landey dares to trek.

“Sam McKinlay’s the Rita is a classic Canadian act, and from the very beginning has been one of the label’s most prolific acts, with more than 10 hours of his material released,” Wagg says.

Along with a slew of tape sets, a split-LP with industrial mystic Lingua Ignota, and innumerable collaborations, the Rita remains one of the most generative and volatile forces in power electronics. Instead of relying on machinery and gadgetry, McKinlay plucks raw recordings from ballet dancers’ pointe shoes and mangles them beyond recognition—a strategy he’s applied to a host of unconventional sources, including shark cage dives and dirt bike motors. Gazmatti is yet another example of McKinlay’s uncanny ability to refract beauty into wretchedness.

The death rattle of now-defunct, lo-fi duo Tollund Men remains one of the most straightforward releases from Total Black: a masterclass in fractured synth-pop. Exploring themes from moral transgression to the illusions of freedom, Tollund Men fuse darkwave and sociopolitical diatribes into a synth-fueled alloy. With whip-crack, machine-made beats (“How Did S\He Die”) and swelling choruses (“Unlock The Door”), Tollund Men craft ironclad hooks that could zipline across a dance floor or pound against a temple—pick your poison. From the Christian Death punk pulse to the album’s art’s deep bow to industrial forefathers Whitehouse, Dedicated To P.F. Lacenaire is a lovingly-crafted homage to post-punk’s triumphs.