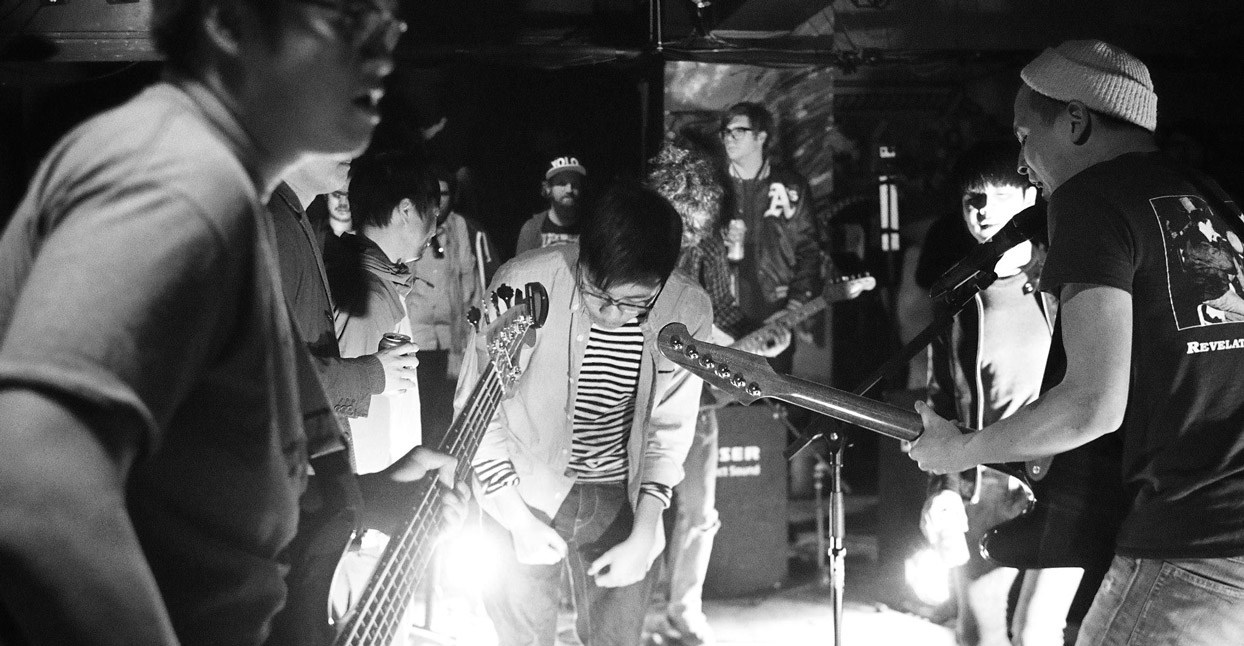 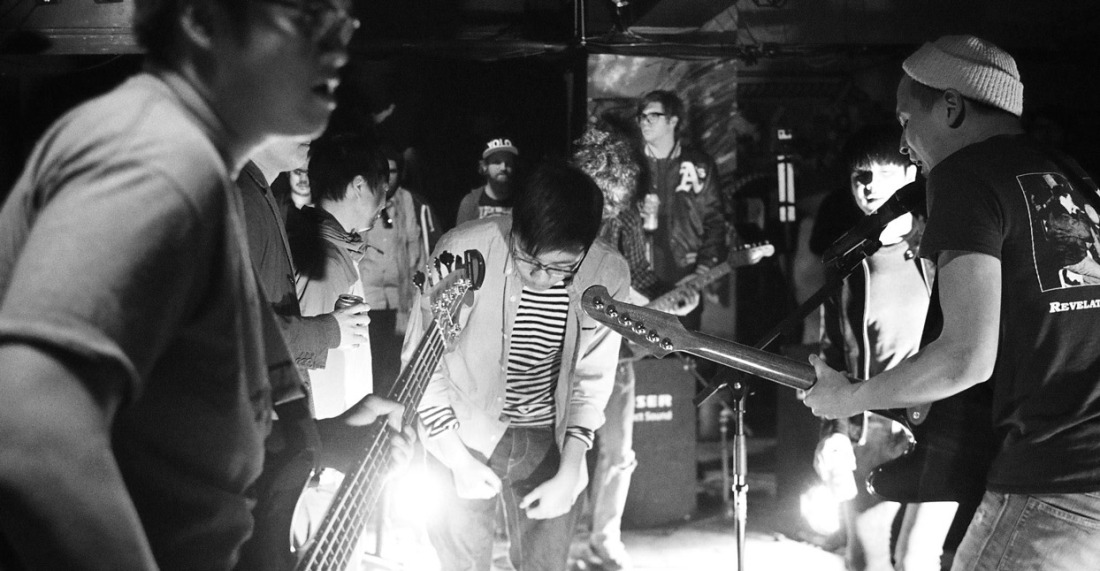 In some ways, DIY music in China can be broken down by region. The city of Guangzhou, in the province of Guangdong in the south of China, has earned a reputation as the regional hub of metal music; Wuhan, in the Hubei province, is the unofficial capital of Chinese punk. Though metal and hardcore are kept alive by bands like Rise of the Southland and Von Citizen, in recent years, Guangzhou and its surrounding areas have seen an upsurge of labels and bands who blend them with China’s more popular rock subgenres: shoegaze and math rock.

Enter Qiii Snacks Records, the three-year-old Guangzhou-based label that’s helping showcase the country’s modern music. Run by a group of six friends—some of whom play in one of the label’s best bands, Die!ChiwawaDie!—Qiii Snacks has gone from releasing strictly local music, to releasing records from bands living elsewhere in China, as well as around the world. (In April, for instance, the label put out Laying by the Fire in Good Company, the first full-length album from Seattle math rock band Curse League.)

Qiii Snacks has teamed with other China-based labels, such as Beijing’s Genjing Records and Wuhan’s Wild Records, to help surface the country’s thriving indie scene, but their most fruitful musical relationships have been with its two nearest neighbors—Boring Productions, an indie pop label in Shenzhen (which is also in the Guangdong province), and Sweaty & Cramped, a label releasing brash emo-punk in nearby Hong Kong. These three labels share a common geography, inhabiting the highly populated triangle of land called The Pearl River Delta in South East China. More important than the close proximity is their shared ideology: they focus on the art of packaging and design as a way to get their respective music to the masses. And while each label releases very different music, collectively, they represent the very best of what South East China has to offer. Here, we take a look at some of the best records these labels have released so far.

Various Artists
Emotion, No & Emotional, Too

Sweaty & Cramped launched in 2015 to inject life into static audiences at local indie shows in Hong Kong. They began putting on so-called “no-stage” shows around the city in an effort to bring the audience closer to the music, to varying levels of success. Soon after, label head Rocky Sum decided to release music by the kindred DIY spirits who were influenced by these shows. That philosophy is clearest on compilations Emotion, No and Emotional, Too, both of which seem influenced by the music of emo bands Penfold and American Football. “I often feel intrigued by how far niche music like Midwest emo has traveled,” Sum says of the compilations. “You see all the university bands in Japan covering Cap’n Jazz and Penfold, so there must be something about this particular style of indie rock that is so special.”

The idea for the first release, Emotion, No, came after Indonesian band Beeswax sent their music to Sum, who then became interested in the idea of cataloging the local take on emo. He sought out and found a surprising number of bands around Asia who held Midwest emo close to their hearts.

Here, Sum connected four local Hong Kong bands to record music that he would later release on a series of limited-edition lathe cut vinyl called This Ain’t Gonna Cut It. The bands—Oh! Nullah, Stranded Whale, David Boring, and Wellsaid—had performed with Sum as part of his Sweaty & Cramped gig series. Wellsaid didn’t need much convincing (this is Sum’s own band), and neither did the other three, all of whom were immediately interested. The standout in this series has to be David Boring’s Victims. The three tracks that make up this short release came off the back of recording sessions for their hard-hitting album Unnatural Objects And Their Humans. Victims tells the story of three people who fall prey to society. The spoken word vocals of singer Laujan, over sparse punk, gives David Boring more than a passing resemblance to the minimalist sound of Beijing band Snapline.

Don’t Sleep on This Cassette Series

Much like his lathe cut vinyl series, Sum turned his attention to cassette tapes and international indie acts, bringing together four bands from around the world to release a limited-run series called Don’t Sleep on This. This focus on physical releases has been a recurring theme in Sum’s work; like an archivist, he appreciates the permanence that physical releases have in the internet age. “Sometimes we get sent beautiful music and it’s a shame that just a few people know these bands,” Sum says. “I think Hiding‘s music is a good example. It is easy to get into, but very tasteful and well-written at the same time.” The Berlin band kicked off the Don’t Sleep on This project earlier in 2018. The series has slowed due to manufacturing issues, but new releases are expected to roll out soon.

Boring Productions can be summed up by their very first release: the Sarah Records tribute album Our Secret World. The sense of simplicity that this British record label employed in the late ‘80s and throughout the ‘90s immediately appealed to Boring label head, promoter, and musician Jovi Lee. He enlisted the help of friends and local musicians to compile this album, which celebrates the best of the legendary Sarah label.

Boring Productions was initially launched as a vehicle to carry this particular record, but following the enthusiastic response from fans of the label around the world, Boring Productions was truly born, and began to release albums from local favorites like The Cheers Cheers and Sound and Fury. At 14 songs, Our Secret World  is broken up into two parts, with four covers of artists like Another Sunny Day and The Field Mice along with 10 original songs directly influenced by the bedroom pop of Sarah Records, such as Butterbeer’s “Listening to Another Sunny Day Makes Me Forget You.” “When I first listened to Sarah Records, I thought this kind of music was simple, not that complicated but also brilliant,” Lee says. “I thought I could write something like this too, so that’s when I began to write my own music.”

The White Tulips & Chinese Football
双拼 HALF HALF #1

As fans of each other’s music, both bands were eager to collaborate on a split record. While Sango Records acts as a musical project for Xu Bo—in which he attempts to introduce Japanese fans to Chinese music and vice-versa—his band, Chinese Football, remain affiliated with Wild Records out of Wuhan. They finally got together with this short split, which eventually saw its release on Wild Records and Qiii Snacks Records. Though this collaboration saw two of China’s most promising independent acts team up, it may never happen again: The White Tulips have since put their band on hold.

Jiangsu band Zoo Gazer got off to a flying start, launching their music career in 2018 with two dazzling releases in the span of 10 days. This eight-track album was released as both a cassette and a CD with the help of Shanghai indie label Shengjian Records. The two labels had teamed up quite a bit in the months previous to this release. Qiii Snacks and Shengjian jumped at the chance to work with Zoo Gazer after hearing demos by the band. As a gesture of their friendship and their mutual affection for the band, the labels decided to share duties, with each label picking responsibility for one physical format. With the band now planning a tour around China to support this release, mainland fans of Zoo Gazer will soon get to witness their shoegazing bedroom pop up close and personal.

Hom Shen Hao’s legacy in Southern China goes back quite a ways. First introduced to his music through the now defunct band Touming Magazine, members of Qiii Snacks Records contacted the charismatic Taiwanese artist about arranging a tour around the mainland. The Guangzhou leg of that tour descended into utter chaos and has since become legendary, as documented on WeChat by Boring Productions’ own Jovi Lee.

When Hom’s new surf rock band VOOID came to China for another tour in support of their self-titled debut album, Qiii Snacks was again on hand to help with the project. With a lack of merchandise available for the tour, VOOID quickly put together this pair of singles—“新月” (“New Moon”) and “礦石” (“Ore”)—for a beautiful, clear lathe cut vinyl release.

“Hom’s music is great, but if you listen to the lyrics too, he sounds kinda like your mother would,” Qiii Snacks label co-founder Andrew Hsu says with a laugh. “His words can be very powerful, like he is giving you advice. In a normal conversation, maybe you wouldn’t listen to it, but from him it makes more sense.”