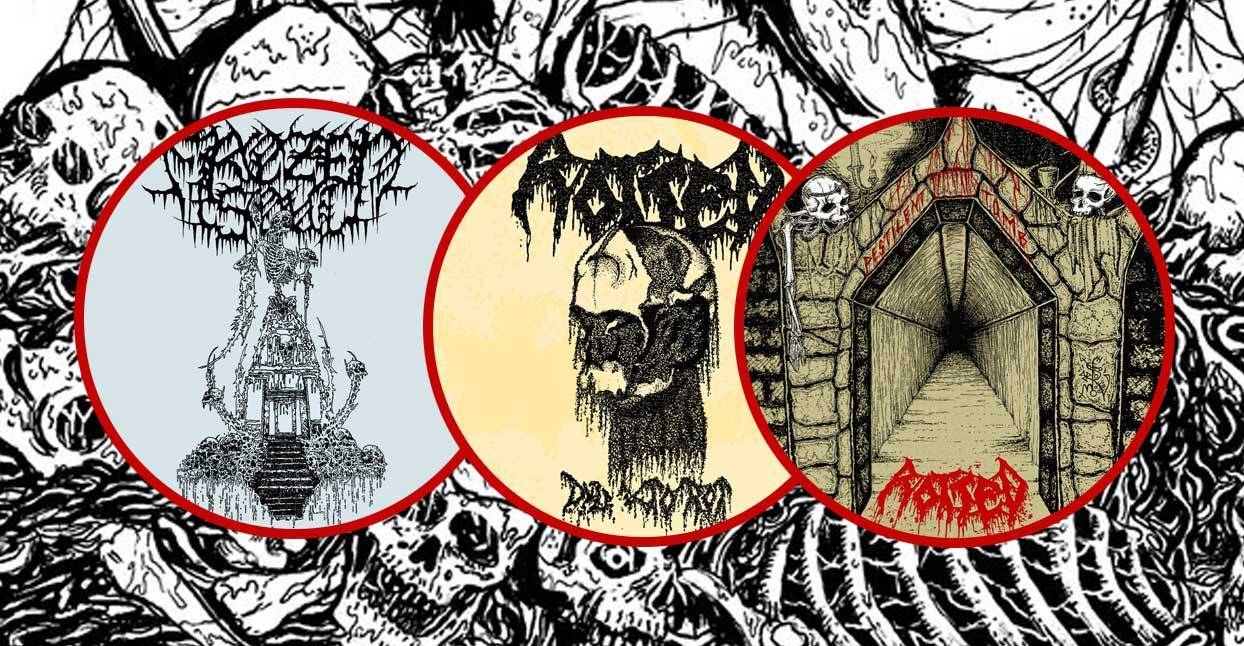 Max Baxter, one half of Encoffinized, explains—or rather, exclaims—the California death metal duo’s origins. The drummer’s introduction might scan as hesher hyperbole at first; after all, this is a subgenre that courts genre tags like “caveman shit” and “entrails eradicated.” But he and vocalist/guitarist Chris Johnson are among a select few who have forged their art in close proximity to actual human waste. Johnson used to drive his truck and generator to the sewer drain near his home in Huntington Beach, CA for rehearsal—expensive rent kept their practices literally underground. These days, they practice in parking lots for the same reason.

But that’s not what Baxter means when he says, “We feel like we’re on ground zero with the whole death metal trend.”

He’s talking about the label they belong to, Los Angeles-based Maggot Stomp, which dropped its first release less than a year ago in August 2018. That demo was Sin Never Dies by Grave Ascension, which label head Scott Magrath describes as “dirty” multiple times—both sonically (“the dirty, early Incantation sound”) and visually (“the dirty, gross hand-drawn logo”). Encoffinized’s Chambers of Deprivation followed as the imprint’s seventh release, in February 2019, and they’ve since become the literal face of the label—in part thanks to Johnson’s mullet, moustache, and Pit Viper sunglasses.

Magrath can distill Maggot Stomp’s style into an encompassing mantra: “I threw out ‘caveman shit’ one day and people seemed to gravitate to it. I had the ‘no weak shit’ tagline for a little bit, now it’s ‘caveman shit.’ It was something stupid that kind of stuck. That’s just what I’m into. It’s death metal for dummies — just getting rid of all the fat and sticking to chunky riffs, ignorant vocals, and heavy, chugging, headbanging death metal.”

Upcoming dumbed-down death will come from groups like Disembowel and Rotted, as well as newer ones like Kommand and Malignant Altar. A recent EP by Unurnment, Spiritual Penury, marks a modern departure from all the caveman-friendly slam; whereas the rest of the roster is stuck carrying around clubs, the California group ride on crudely-made wheels—a  bit more technologically advanced, but just as primal.

“I feel Unurnment is a more punk version of brutal death metal,” says sole member Fred Avila, also of crossover thrashers Primal Rite. “Maggot Stomp is 100% a death metal label, but there’s definitely a punk undertone to a lot of what [Magrath]’s releasing.” (To wit, that punk attitude is exemplified by Encoffinized’s sewer rehearsals. The locale tended to attract shady characters, so Johnson kept a mini Kill ‘Em All style hammer in the back of his amp, just in case. Fortunately, the frontman says, “No one’s been stupid enough to fuck with two big-ass dudes playing death metal in the sewer.”)

The 46-year-old Magrath’s love of death metal began in the early ’90s, and the style has now consumed more than half of his life. His first “releases” under the Maggot Stomp name were enamel pins based on classics like Suffocation’s Effigy of the Forgotten and Repulsion’s Horrified. That established fanbase served him well when his fledgling label needed an audience. Magrath already knew a bit about building a label, via an early foray as Takeover Records, who famously released Terror’s debut 7” in 2002 before receiving a cease and desist from “some twerp in Yellowcard,” who was concurrently operating a label of the same name. (Magrath regrouped under the Old Guard Records moniker and released Dangers’ self-titled EP as the label’s last before fading away quietly.)

Fortunately, Maggot Stomp is not the kind of name a pop-punk band would trademark, and this time the takeover is in far more than just name. Decibel dubbed 2017 as “the Year of Death Metal,” to which Magrath says, “I think maybe 2017 was where people started discovering more underground stuff and it’s just kind of kept—not snowballing, but kind of just chugging along like a giant riff train of death metal.”

Perhaps the reason the Maggot Stomp caboose runs so smoothly is the familial vibe. The bands are proud to be on the label, and in turn Magrath takes care of them. Unurnment’s Avila ordered a Maggot Stomp 2019 longsleeve before signing, after which Magrath updated the design to include the logo, refunded the musician and sent him one anyway. Given Maggot Stomp’s pace—they recently announced Fluids’ Exploitative Practices LP—the 2020 shirt may not have room on its sleeves for the whole roster, and death metal will be all the better for it.