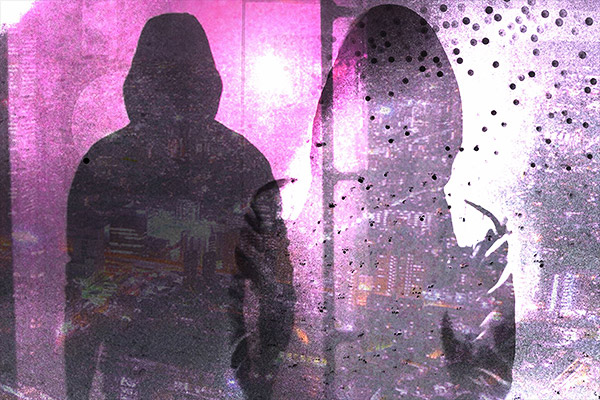 “A lot of the most intriguing demos I get are sent from some obscure email address, and the whole message will be mysterious, with just a random link at the end to a music file.” —HKE

The UK-based Dream Catalogue isn’t so much a record label as a self-contained alternate reality. All of its releases seem to occupy the same space: a neon-lit, science-fiction middle ground between sleep and waking—the tech-horror nightmare of Blade Runner and Mr. Robot as viewed through the glass walls of a hyperbaric chamber. On breakthrough album 新しい日の誕生, by 2814, bleak wisps of synth settle down slowly over split-second snatches of vocals, above clicking, machinelike whirrs. While most of the label’s output could loosely slot under the “vaporwave” tag, all of them feel carefully composed and arranged—not so much found-sound Cuisinarts as solemn burial music for androids.

Adding to the sense of mystery is the fact that almost all of the artists on Dream Catalogue operate under a shroud of anonymity. Even the label head, who goes by HKE, doesn’t know who most of the artists are—and he prefers it that way. “We live in an age where it’s almost impossible to be completely private,” he says. “You can’t even upload a photo without it circulating everywhere. A lot of the most intriguing demos I get are sent from some obscure email address, and the whole message will be mysterious, with just a random link at the end to a music file.”

Despite this, all of the artists on Dream Catalogue still manage to hew to a unified aesthetic. “All of the artists try to create a ‘lucid dream’ kind of feeling,” HKE explains. “It’s music for headphones, and it’s meant to create vivid imagery in your mind while you listen to it.” Because the label’s roster can be intimidating for first-timers, we asked HKE to provide us with a short guide to some of Dream Catalogue’s most notable releases.

That album is a collaboration between myself and telepath. It’s the definitive album for the label, pretty much. It’s crossed over into being big with people who don’t even follow the label. It’s also the first album that we ever did a vinyl release for. That album just exploded and brought so much attention to the label. That album helped define the label, and what the guiding vision of the label should be. The animated cover is by an artist called Kidmograph, who’s also worked with Maroon 5 and a lot of larger mainstream artists.

We wanted the record to have a strong sense of place. A lot of music I make I like to inject a narrative into it. I don’t like to be completely direct with what it is, because I like to leave it up to the listener to create that world when they’re listening, but I do like to inject little things that suggest a certain narrative. A lot of it is inspired by my own vision of reality, how the world itself is a cold dream world that’s constructed by society. We were definitely trying to create a futuristic dream world of some sort without being too direct about where that is.

Like the previous record, but set in the middle of a lush rainforest instead of the confines of an overcrowded city at night. Eerie synths expand like fog after a storm.

That album came about from Nmesh and telepath getting in touch with each other and basically saying, ‘Do you want to make an album together?’ The casual nature of the way the scene that exists around the label works is a blessing to me, really. On this album, telepath takes the idea of this dreamy music into a more heavenly, ethereal jungle story; 2814 is more futuristic. But it’s the same concept of dreams in both albums. I chose both of these albums to show how it’s not necessarily the style of the music that links the albums together, but the idea of taking the same concepts and being able to put them into different worlds. I also wanted to highlight telepath as an individual artist. He’s really grown to be one of the most important artists not only in this scene, but in general. People are devoted to his music. It’s got this intangible quality that people really latch on to.

A kind of sonic prequel to the 2814 record, HKE feels like it was lifted from Wong Kar-Wai’s futurist romance 2046, with deep ripples of sound and hypnotic, repeated melodic phrases.

This album starts off really intense with the first track, and then sort of brings it down to a more subtle ambient drones, with really subtle melodies going on in the background. The album is ultimately about being alone and looking out the window at the bizarre dream world reality we find ourselves in, and finding a certain romantic beauty in that. It’s about being lost in this insane universe, about being a dreamer—reflecting and creating the dream world for yourself. I was playing with a really basic idea of waves – sine waves, triangle waves, the most basic elements of what makes up wave frequencies—and I would play with those tones to create new ones and then mesh them all together to see what kind of sounds it would make. For that album in particular, I was really trying to create this dream world. I didn’t want to think about being too direct. I actually made it around the same time we made 2814, and I think there’s some similarities between the two albums, but HK1 is much more minimal. I think it brings a similar dream world to life, but it’s much more subtle, and maybe a bit more melancholy as well.

One of the most provocative releases on the label, the songs on information_age largely feature warped human voices—either in the foreground or the background—hinting at the closing gap between man and machine, and the amount of personal information we allow to be synthesized and cataloged. It seems to imagine the sounds inside the machine that hold the most vital pieces of our identity.

I chose this album because it’s by a mysterious artist. I’ve got no way of knowing who they are or where they’re from. There are quite a few albums on the label that are these mysterious anomalies, made by artists who pop up out of nowhere—sometimes they’ll be an alias of another artist, or sometime they’ll be a random artist who sent me something over email. This album in particular is a really strange one—even to me as the label owner. Given the title of the album and the ideas in the music, I do think it’s getting at the idea of information overload. There’s so much mystery to the label, and I think that’s what attracts people to it. That’s why albums like this one are important to the overall idea of Dream Catalogue.

As close as Dream Catalogue comes to a “mainstream” record, Mana Pool is loose, twitchy techno, with big bass roots and melodic top lines, making it one of the few albums on the label you could play in a club without risking a total dancefloor evacuation.

There are a handful of albums on the label that are a lot more accessible—a lot more mainstream-sounding, if you will. The Vaperror record is the epitome of those. It’s the second album we pressed on vinyl, and we sold about 700 copies of it overall, which is huge for us. Even though it doesn’t meet the usual criteria of most of the albums on the label—creating this sense of a dream world reality in the music—it does have those same dreamy tones. They’re just applied to more structured beats, instead of the usual ambient experimentalism that the label is known for.

After End of World Rave came out, there were quite a lot of people doing copycat stuff—a lot of this ‘hard vapor’ music. But then this DJ came along – again, it’s another really mysterious one to me, and they were sort of taking this concept from End of World Rave and spinning them around into more of a feminine approach. It was still really aggressive and hard, but it was also using the same dreamy qualities of the music on the label. It’s such a brutal album, but it still gets across this idea of ‘dream music.’ The album’s got this continuous flow to it, and it has these suggestive ideas in the music. I think it still has a home on Dream Catalogue even if it’s quite brutal and dark.
—J. Edward Keyes