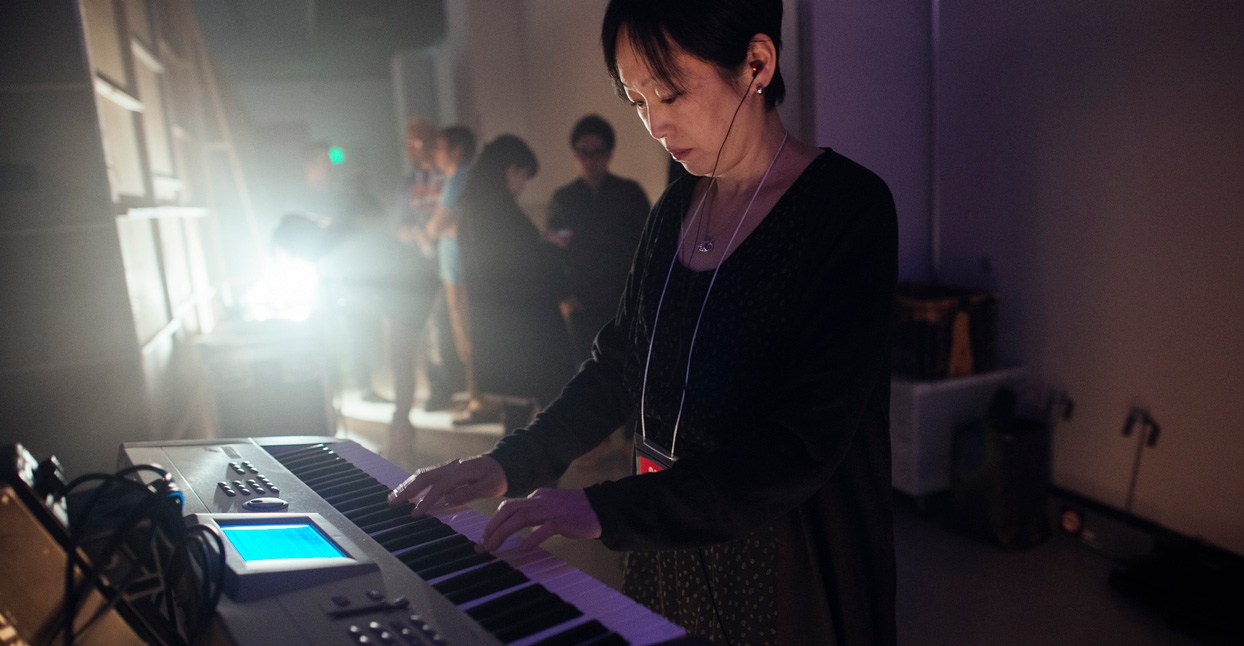 Manami Matsumae is a legend in the game music world known for her pioneering work with Capcom and SunSoft in the late ’80s and early ’90s. She’s perhaps best known as the sole audio producer for the original Mega Man—a sweeping, fast-paced score that was an audio milestone of the 8-bit era—but her early credits also include songs from the gorgeous NES port of Legendary Wings and the arcade classic Final Fight. In recent years, she has contributed to the cult-hit platformer Shovel Knight and to the Mega Man-esque Mighty No. 9. Matsumae is a master of soaring, scale-climbing melodies, and had innate ability to squeeze new and beautiful effects out of the early soundboards she cut her teeth on.

In December, to celebrate 30 years in game music, she released her very first solo album. As the title of Three Movements suggests, the album is split into three distinct pieces: The first section (with names like “Select Your Hero” and “The Final Showdown”) sounds like an assortment of lost gems from gaming’s past, while the second nods toward dance music from around the globe. But it’s the album’s moving third act—which runs from Final Fantasy-esque music to introspective and even ambient works—where listeners get a first glimpse at something personal and singular from a masterful artist whose work to date has always been collaborative. But as Matsumae writes—via a translator—even when there are no levels or bosses, she imagines worlds for her songs. “Making music for games up to this point has entailed adhering to its visuals and game world, its characters and their movements,” Matsumae tells us. “But I was able to freely create the settings of this album myself.”

You’ve done so much game music over the years. The first thing I’d like to ask you is, do you consider yourself a gamer? If so, what are some of your favorite games?

I became interested in games when I was a student. I played games like Dragon Quest and Super Mario. I enjoyed other games after that, but I’m not too good at action games, so I gradually became more interested in RPGs like Famicom Wars, Vandal Hearts, and Shining Force. Among those, I particularly like Fire Emblem. However, Fire Emblem: Thracia 776 is way too difficult and is the only one in the series I’ve never beaten. I’d like to beat it someday!

You began working on game music in an era when programming the music was an extremely complex, scientific process. How did that affect you as a songwriter and composer?

Back then, and unlike today, there were some pretty harsh limitations in game development. And since we only had so much data space to work with, I needed to figure out how to get the music to fit into those limitations. I could achieve that by utilizing repeating drum & bass sounds: I could allocate more data space to the melody, which meant creating melodies that are particularly memorable. I’m still influenced by that composing environment, and tend to focus on the melodies of my music. I continue to write memorable melodies to this day.

Being a female composer, did you face sexism or other barriers in your early work?

I’ve seen the word ‘sexism’ thrown around in Hollywood recently, but actually, I never experienced such things during my time at Capcom. At the time, most of the staff members on the music team were female. The men that were around probably felt less powerful!

Among the games you’re well-known for are the Mega Man titles. Is there a particular Mega Man sound or palette you think of when you’re working on that iconic series?

Mega Man was an action game that was quite different from any Capcom action game that came before it. The point was for the player to develop a strong sense of energetic rhythm, allowing the player to have a feel-good experience. Therefore, the music ended up being rock-style. The composers that did the sequels ended up carrying that style forward, and the games continue to be amazing today. I’m not involved with it, but there will be a Mega Man 11 this year. I hope everyone will enjoy that when it hits.

What inspired you to make your first proper solo album after so many years in the music  and games industry?

I worked with game music label Brave Wave on my album. Since the company was founded, its creative director, Mohammed [Taher], has been asking me to create a solo album. I didn’t think that a mere game music composer could create a solo album, so I wasn’t really keen on the idea at the time. But Brave Wave was engaged in making music outside of those that went into video games, and they gave me opportunities to collaborate with musicians from outside Japan. I found that to be quite encouraging, which slowly but surely made me change my mind. At Japan Expo 2015, I remember telling Alex [Aniel]—the CEO of Brave Wave—that I’d make a solo album if he gave me one bottle of wine. He offered to add two more bottles of wine on top of it, and then we decided to release it in 2017 to celebrate my 30 years as a composer.

Your new album is separated into three parts, which have distinct sounds. Can you tell me about the tools you use to compose and program music?

I use Cubase to compose. It offers a variety of sounds and I can use various sources to produce and mix sounds together. Also, when making 8-bit music, I borrow my husband’s synthesizer and do the sampling from there.

Is there one big theme you had in mind while putting this album together?

I’ve had to compose for many genres during my career: battle scenes, town maps, select screens, you name it. So I wanted the album to reflect my origins as an 8-bit music composer, and then the evolution I went through to make more grand-sounding music afterwards—all of which reflects my composition styles. I wanted this album to feature a sense of evolution in sound. I’ve dabbled in various genres, so I wanted everyone to hear all of them.

‘Earth’ was particularly striking to me—very beautiful and very sad.

I composed ‘Earth’ when the Islamic State and Rohingya conflicts were being reported on the news. I wondered how there could be such conflict on such a beautiful planet. The Earth appears a shining blue when seen from outer space, and it’s really quite a beautiful planet. I hope that, even for just a little bit, people who listen to this song can gain a sense of wanting the world to be just a bit more happy, with just a bit less hatred and pitifulness.

Are you interested in performing your album live? Is that something you’ve been involved with?

Recently, I’ve been blessed with many opportunities to perform overseas, and have performed music from the games I’ve composed for. I’m really grateful for it. I’m too shy to perform Three Movements all by myself, but I’d be down to collaborate with someone at some point to do so.

What does it feel like to have young fans all over the world who are discovering your work?

I feel honored. There are many, many game composers out there; it’s a field with its ups and downs. It’s a miracle that I’ve been able to do this for thirty years. It wouldn’t have been possible all on my own; I have the support of the fans to thank, and the connections to the various people I’ve met. I compose each and every day while having these feelings of gratitude within me. Thank you.

Do you have an all-time favorite game soundtrack?

I don’t really listen to other game soundtracks, but I do like the music from Vandal Hearts. Before beginning the game, I’d put the controller down and listen to the background music twice through. I particularly like the tracks ‘Fortress’ and ‘Crisis,’ and listen to them for about five minutes whenever they play.

If you could create your own version of a soundtrack for any game ever made, what would it be and why?

Fun! Fun! Pingu would be that game! It was released for the PlayStation in 1999. There weren’t a lot of orchestrated games back then like there are today. I remember it being composed with just E-mu’s Proteus synthesizer. Therefore, if it were to be arranged today, I wonder how it’d turn out?