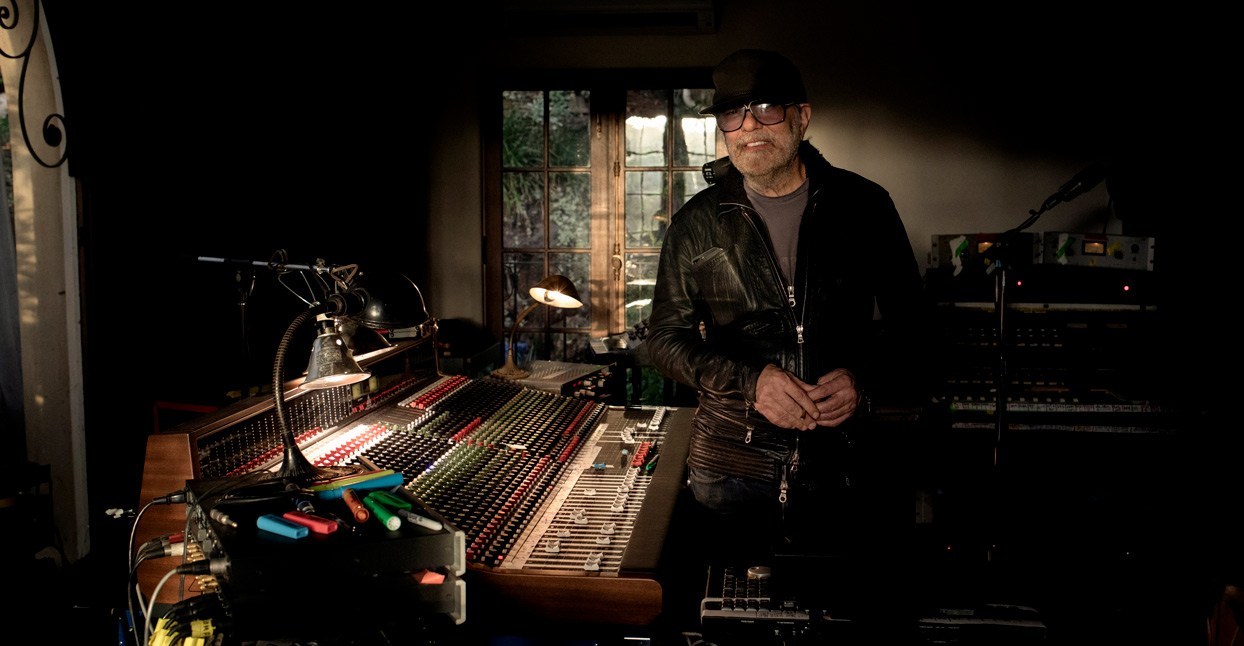 Daniel Lanois is a musical giant. Perhaps best known for his production work with Brian Eno on the early albums that defined U2’s sound, the Canadian songwriter/producer/multi-instrumentalist has also cut great albums for Bob Dylan, Willie Nelson, Emmylou Harris and Neil Young. The records he produces may have vast musical differences, but, a Lanois production is not without its signifiers: big and dynamic percussion, experimental flourishes, and layered effects that make any given song sound endless.

Lanois’ own songs, generally speaking, are playful, experimental affairs. He is as likely to incorporate hallmarks of Jamaican dub as he is to dabble in Western Swing or harsh electronic noise. Perhaps that wandering spirit is why Rockstar Games reached out to Lanois—a baby-boomer who hasn’t played video games since the first generation of arcades—to produce the songs that appear in their latest sprawling title, Red Dead Redemption 2.

Lanois isn’t the only artist who lent his talents to RDR2; a musical score helmed by returning Redemption scorer Woody Jackson appeared earlier this year. But the veteran’s songs—which include collaborations Rhiannon Giddens, Willie Nelson, Josh Homme and famed soul music artist D’Angelo—accompany some of the game’s defining moments. These elevated placements, coupled with the game’s overwhelming success (at over 25 million copies sold, it’s a bigger success story than The Eagles’ Hotel California) ensure Lanois’ sound will reverberate with an entire generation of gamers. We caught up with the man himself via telephone from his studio in Hamilton, Ontario.

First things first: Are you now, or have you ever been, a gamer?

Not in modern times. When I was a kid, I played some of the early video games. I’m not suggesting that I don’t want to be a player or anything. But they contacted me for my music rather than my game-playing skills, luckily.

You’re such a collector and curator of sound—I wonder if video game sounds interest you?

I’ve enjoyed the sounds that come off of various kinds of games, from the pinball arcade all the way to modern times. It’s fantastic what’s happened with

sound. People make certain sounds, and it used to all be done by hand, but now Foley [sound effect creation] has gone to this space-age place. You can hear the whispering of a blade of grass. It’s all very exaggerated. It’s almost entering the world of sonics through microscopy.

Is that a world you want to live in? Creating foley sounds?

I’ve always appreciated the details of sound. When I was making ambient records with Eno back in the day—in fact, in this town of Hamilton, on the outskirts there are swamps. Bird sanctuaries, really, with fantastic insect sounds—we would get up early in the morning and record insect sounds and bird sounds. We worked those into the records we were making.

How different was working on Red Dead from working on, say, a movie soundtrack?

The person playing the game is directing the character, either to walk into a saloon or walk down by the riverbed, let’s say—and depending on the choice you make, you’ll hear a certain part of a given song. We call that a stem. So I have to mix the melodic stem separately from the rest of the song. It makes me put all my mixing energy into those few components at that moment. When I listened back to these stems—these little sub-mixes—they really had a lot of vibe to them, because I was devoting all of my skills to one small aspect of a bigger production. Then we’d move on to the bassline, and then the drums and percussion. So maybe there’d be six or seven choices gotten to by moving the character in the game. And then at some point all those sounds come together.

I thought that was fascinating. It reminded me a little bit of this multiple-speaker thing that I had going with Eno for a while. We’d have maybe a dozen different speakers spread all over the studio, or around the house, and we’d send different sounds through different speakers. I thought that was just fabulous, because you were walking through a forest of sounds that changed largely by distance. Moving into this mixing for the game touched on that nerve—something that I had already fallen in love with a long time ago.

And it was also an excuse to work with Willie Nelson again.

I got Willie on the phone right away. He said, ‘I’d love to do it, but I’m in Hawaii under threat of a hurricane.’ I said, ‘How bad is it?’ He said, ‘Well, not all that bad, I’m in the house with Woody Harrelson, we’re playing poker.’ In the end, I was supposed to write a song with Willie but I wrote it myself. A song called ‘Cruel World.’ We recorded it at his house in Los Angeles when he finally made his way out of Hawaii. And that was a treat. I’ve worked with Willie before, on Teatro. This time his son Micah—who was just a kid when we made Teatro—played guitar. He’s a great guitar player. It was a nice little family affair. Bless their hearts.

Had you ever been asked to work on games before?

I’d never gotten an invitation before, and I only responded to this one because I was invited. I don’t hustle for work. I just wait at home, and if someone wants me to come to the party, then I do. They said, ‘Would you like to work with D’Angelo?’ Are you kidding me, I’d love to work with D’Angelo. And it was fantastic. I got to work with one of the great R&B singers!

What attracted you to D’Angelo’s music?

I was immediately smitten by his sense of rhythm, and where he places the beat, and his appetite for playing behind the beat, as we call it. It was very, very sophisticated, and I thought, ‘OK, this guy knows something that I don’t.’ That’s always what I’m most interested in—what I don’t already know. The background vocals he put on ‘Unshaken’ are still mystifying to me. He’s a fantastic Fender Rhodes player, a great piano player. His left hand on the Rhodes was so good that I didn’t even have to put a bass over that line. Beautiful, beautiful left-hand player. If you’d said to me, ‘You get to work with D’Angelo and you’ll not be paid a nickel,’ I would’ve said OK!

What kind of feedback have you heard from gamers?

There’s a song called ‘That’s The Way It Is.’ It happens at an emotional peak in the game, and we got so many comments on this from kids who were saying, ‘I’d never cried before, and I cried when I heard that song.’ I thought, ‘Well, if we allowed a few folks to push a certain emotional button in themselves that otherwise was dormant, that’s kind of a good job done, you know?’

This was a highly anticipated project. Does that level of expectation change the way you approach a project?

I’ve always been in the service industry, since I was a kid. I had a recording studio when I was a teenager. So I was used to helping people and helping them reach their dreams. I always appreciated that invitations came my way, and I just wanted to make sure that people were looked after. This was no different. Obviously the medium is a different one, but I didn’t feel a new kind of pressure at all.

Is it important to not think about expectations, then?

Music has to be the guide. So you don’t want business pressure to make decisions for you. Music will always be the governor. I’m not going to lie, it was not easy to do this. I got pretty sick on the road, I was overworked in New York, and I had nausea and was throwing up and all this. There was a lot of trial and error. In the end, the guys were very supportive of a few unusual, surprise ingredients that came our way. The pressures are interesting. I don’t mind pressures. But what’s more important than pressure is having very smart people around. And very smart people don’t mind a kind of shifting plan if it looks like a great place to go to—and these people [at Rockstar Games] are very smart.

You really could’ve, with this project, just done some really straight country and Western tumbleweed jams. What gave you the idea to branch out?

I’ve been thinking about genre. A lot of the bass sounds that I used for Red Dead are completely synthetic. I used my Moog synthesizer, and nobody ever says anything about that. Nobody says, ‘Wait a minute, you can’t use a Moog, it’s got to match the Western setting.’ No, if you pull it off, people don’t question the era of an instrument. The job I have is really to get to a place where you’re complementing the scene so well, or the music is so emotionally deep, that nobody questions how you did it.

Like a magician, yeah. ‘You sawed her in half, I saw it with my own eyes!’ But I don’t think I’m a magician. You can’t go into work thinking you’re that person. I bump into certain sounds that dictate a direction, and I just pay attention to where the music takes me. I’m sure my personality is a big part of all this, but you don’t want to walk into the room with that kind of an ego. When you start a new work day, you’re just back in the sandbox and you’ve gotta build another castle. No matter how many you’ve built before, it’s let’s go!

It’s funny you mention ego. You’ve worked with so many huge stars. How do you deal with ego?

I’ve never really had a problem with that sort of thing.

Not even with Dylan?

I was respectful to Bob Dylan. I got the feeling that part of him was private, and that his technique or his vision was probably not something that he’d want to discuss in front of the entire band or entourage, or in the studio with us. So we had a little private spot. We’d just go outside in the courtyard, and I’d talk to him about approach, and we’d agree on something, and we’d go back in, and I instructed the musicians to follow this new direction.

At the end of this column I always ask, ‘If you could remake the soundtrack to any video game ever, what would you pick?’ But for you, I wonder if there’s an artist that you wish you could’ve worked with more than anyone else, and why?

I wish I could’ve worked with Jimi Hendrix. I’m a guitar player, and he died young. I think I could’ve made a great record with him. I also thought that I could do a Miles Davis record. In fact I met Miles Davis, and there was a little bit of talk of working together, but he passed before that ever came to be. That’s just to name two. I like to think I would’ve brought out something in them, and they certainly would’ve brought out the best in me.

They’re both heroes of yours.

Yes, both heroes and innovators. When I look at the man in the mirror, he still wants to be innovative. He places a lot of importance on breaking new ground and maybe bumping into something nobody’s ever heard before. That’s been part of my quest, and I’ve never looked back. It’s probably the era that I grew up in. In the ’60s we weren’t saying, ‘Boy, we really should dig out those old Perry Como records!’ I don’t think I can live with myself if I don’t come up with something new to bring to the table.