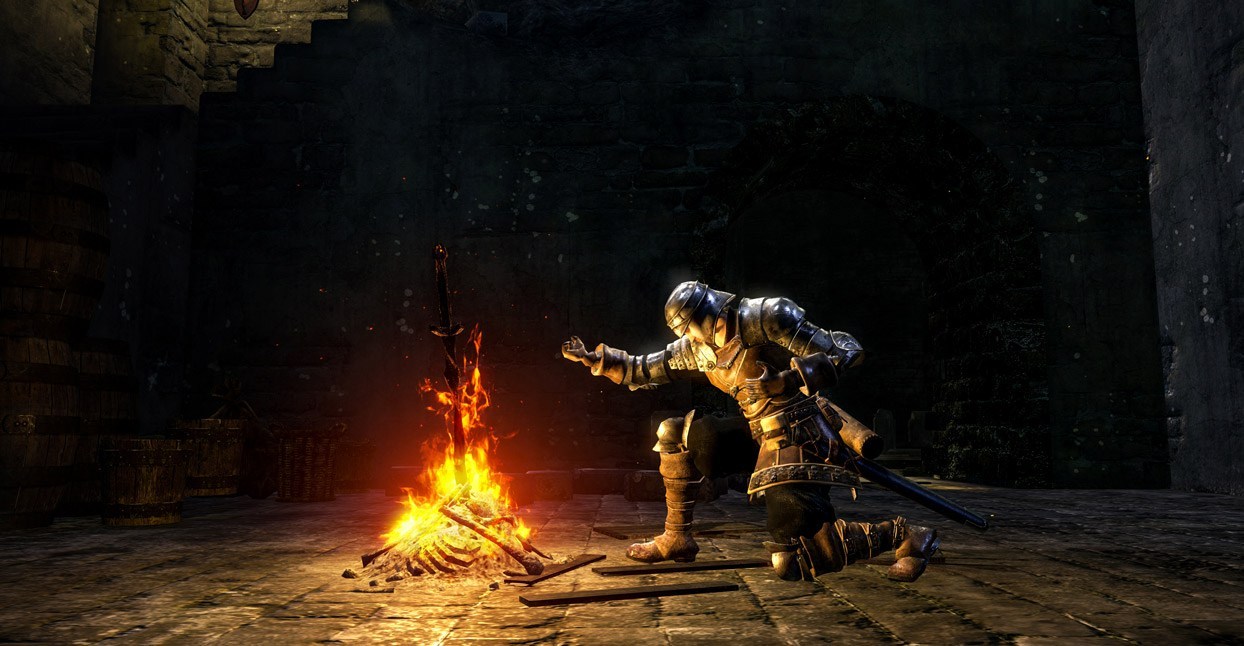 Dark Souls is a decade-old video game franchise celebrated for both its gothic aesthetic and its unforgiving, punishing gameplay. Basically, it’s the most metal series ever—though the games’ soundtracks are much more classical and choral than hard rock. Dark Souls fans are legion, and they are committed: expanding upon the game’s fantasy-world story, recreating in-game clothing and jewelry, and of course, starting Souls-themed bands.

Harrison Stivarius is a 24-year-old gamer and metalhead from Atlanta, Georgia. “I was a quiet kid [growing up],” he says. “I was stuck in this little turtle shell that I couldn’t seem to get out of.” Video games inspired him, and playing with friends made his social anxiety more manageable. At nine years old, he discovered Halo, which quickly became his favorite game series—until his friend and bandmate Adrian Davis recommended the much more “hardcore” Dark Souls. The two friends, who have also played metal together as Valak, bonded over the Dark Souls franchise and became enthralled by the game’s deep lore and its die-hard community. They decided to channel their epic fandom into a new metal band.

Firelink doesn’t cover the music from Dark Souls: instead they build original metal compositions that detail, praise, and elaborate on the games’ universe, often in the form of character sketches based on its notoriously difficult bosses. The duo’s debut LP, The Inveterate Fire, is a shockingly ambitious home-recorded collection of metal with elements of labyrinthine prog-rock and quiet sections of baroque ambiance. Vocalist Davis’s scowling, undead howls—he sounds a little like Skeletor from the He-Man cartoons—lend the project some dismal fantasy authenticity, and Stivarius, a multi-instrumentalist who plays and programs all of the band’s music, is a bonafide shredder who fully indulges in his solos. Firelink was created as a passion project (and they are not the first or only Souls-themed metal outfit), but the warm reception from fans has shocked the band. Stivarius spoke to me from his home in Atlanta while boxing up Firelink’s vinyl LPs for shipping.

What came first for you? Was it a love of video games or a love of music?

Mostly video games. When my parents split, and I lived with my mom—my day when I got home was pretty much going downstairs and playing the Mario games, Jak and Daxter on Playstation. Oh, and Metroid Prime, too. That’s one of the top five best games I’ve ever played, I think. Then, of course, I went over to a buddy’s house and played Halo, and that became my game for the next 15 years.

So where did music come in to your life?

I was in third grade when I was forced to play cello. When I was 10, I finally convinced my parents to buy me a cheap acoustic guitar. They bought me a little guitar book, and it had these chords in it. I had only ever played single notes, so I didn’t know what a chord was. I remember watching School of Rock and thinking that was so cool. Eventually I stopped playing cello and I kinda wanted to be a rock star.

What do you do when you’re not gaming or rocking out?

Right now I’m on a break from nursing school. I’m about to go back. But I’ve taken the past four or five years off to really, really re-learn the guitar.

What is it about the Souls games that grabbed you?

Dark Souls didn’t come to me until about four years ago, and now I’ll play anything from [the game’s developer] FromSoftware. I just can’t get myself through playing anything else. I’m absolutely hooked on the Souls games—the emotion, the soundtracks, the feeling of isolation and hopelessness, the sense of accomplishment you get from no-hitting the bosses or whatever. There have been some crappy times in my life when I felt like that lonely kid again, and at least I get to come home and play Dark Souls.

What made you want to write original music that pays tribute to the game, versus covering songs from the soundtrack like a lot of other artists have done?

I think there were always going to be people who are better at doing covers than me. Adrian and I wanted to offer something new for the community. We wanted to create our own soundtrack, in a way, and try to convey the game’s emotions through our own music. We try to get the atmosphere and epic moments in there.

I have to admit, I have a lot of respect for the Souls games, but they’re so bleak, it’s hard for me to get into them.

This is the end of the world. Everything is sad, everyone’s sad, everyone’s depressed. But after opening the door to the Kiln of the First Flame [at the end of the first Dark Souls], I remember being in awe and being like, ‘Wow, this is the end of the journey.’ And that moment right there is when I was sold. The music that hits when you’re on these stairs is just—all of it, it stuck with me, mesmerized me. I will say this: I think learning a little bit more about the lore helped me get more immersed into the game. It took awhile for me to really, really appreciate it.

How did you develop the sound for this band?

Adrian turns me on to a lot of stuff, a lot of really good music. We had been on a major black metal bender for a while: just long, droney black metal. He brought this synth over, and we started noodling around on it with weird soundscape noises, and started recording some very rough, out-of-tune guitar. I picked a terrible amp, found some terrible drum sounds. And we tried to black metal vibe. And the first song ended up being 28 minutes long. We were just messing around. But we listened back, and we were like, ‘Wait a second, maybe we can hone this in a little bit.’ We just dialed it in, and eventually ‘Kindled’ was the first song that we wrote for Firelink. It just kind of happened. It was really weird. We weren’t planning on it, we didn’t set out to do it. We just always talk about Dark Souls, every single day, and we text each other jokes about it. It’s one of the great joys of my life and I’m sure his too, so we decided to dedicate the new band to that.

Were you aware of other bands like Soulmass, and more recently Tomb Mold, doing similar projects?

No, we figured there was probably going to be some stuff out there, but other than the guy who did ‘Down in Majula,’ which was cool, no. I know that there’s a Bloodborne band. There’s the power metal band Visigoth—apparently their next album is supposed to be Dark Souls-related, which is cool! I think there’s plenty of room. I need to listen to those other bands. I’m sure they’re wonderful.

Do you ever worry that you’ll run out of material?

I think there’s plenty of room within Dark Souls in general to have enough content to write 20 albums; you can continuously dig deeper. There are 41 bosses in Dark Souls 2 alone. We have a little road map on the wall of where we’d like to see the future of this band go. We’re actually almost done with album number two right now.

What was the recording process like for The Inveterate Fire?

Our recordings were done in the comfort of my one-bedroom apartment. I have a big old amp that’s been sitting in my closet for like seven years that I haven’t been able to turn on. We recorded with Turtle Beach headphones. At one point we had to re-record the entire thing. And I’m ashamed to admit it, but we ended up going with programmed drums. Drums are definitely the most expensive part to record. So we did the best we could. We might actually go with a real drummer on this next album. We didn’t actually play a banjo on the album, either.

It all sounded real to me! Maybe it’s appropriate that a video game band would use some synthesized instruments? You’ve also never played live with this band, right?

We’re trying so hard. We want to play live music so bad. If you have any readers who are in Atlanta, Georgia and want to play bass, guitar, or drums, we need it. I have this weird idea of dressing up like Solaire and playing a show. That’d be fun as hell. Just embracing the full nerd.

You talked about it like paying tribute to the community. Is that how you see it, as giving something back to this game?

Yeah, I think we both do. There are so many people out there who have done so much for this community. I don’t know many other gaming communities who go this deep with a game. Right now I’m listening to an eight-part series critiquing some guy who critiqued Dark Souls 2 who critiqued some guy who critiqued Dark Souls 2. It’s a 12-hour long series. I’m just fascinated by the fact that people would do that. And it’s awesome. The best stuff that we see is the comments that we get, where people say something like ‘Praise the Sun.’

Yeah! My mom doesn’t get that. My mother wouldn’t understand what that means.

This is a twist on my usual closing question that I ask game music composers, but if you were going to start a band dedicated to any other game franchise, what would you pick?

I want to say Halo, but what I think I would have the most fun doing is probably a horror game like The Evil Within. Adrian and I both really, really like that game—we drew a lot of influence from that with our other band. We’re really into the band Swans. They do a lot of weird, creepy stuff, and I think we would have a blast coming up with some really creepy, really eerie-sounding music.